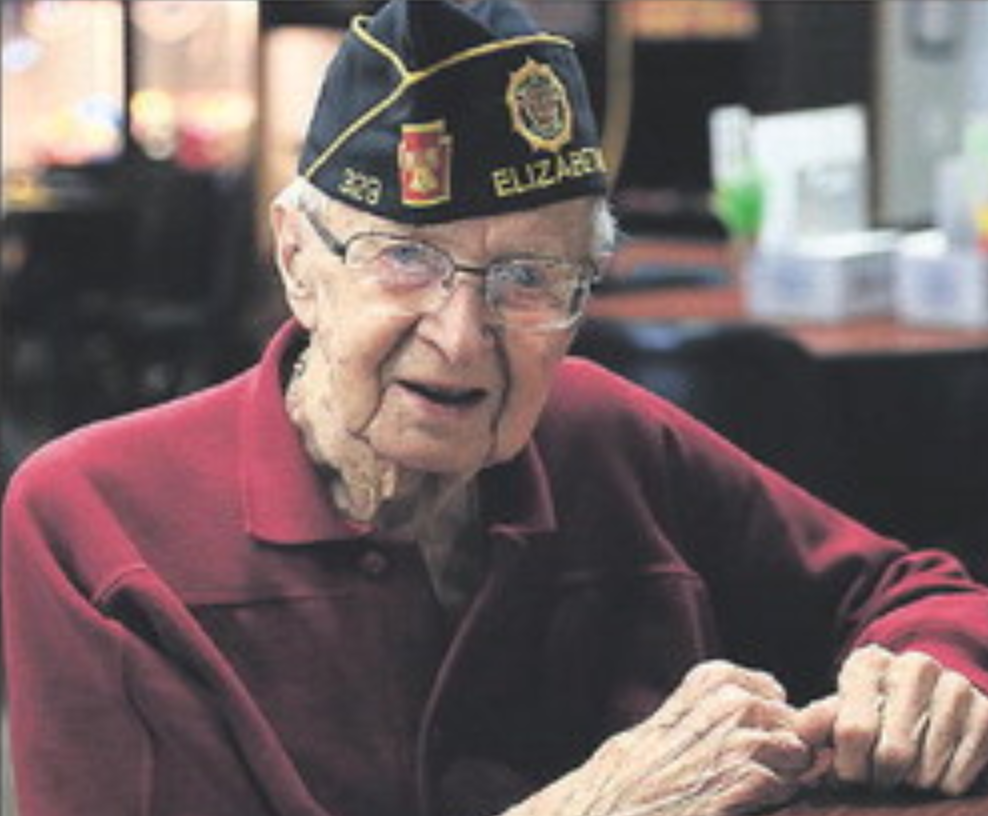 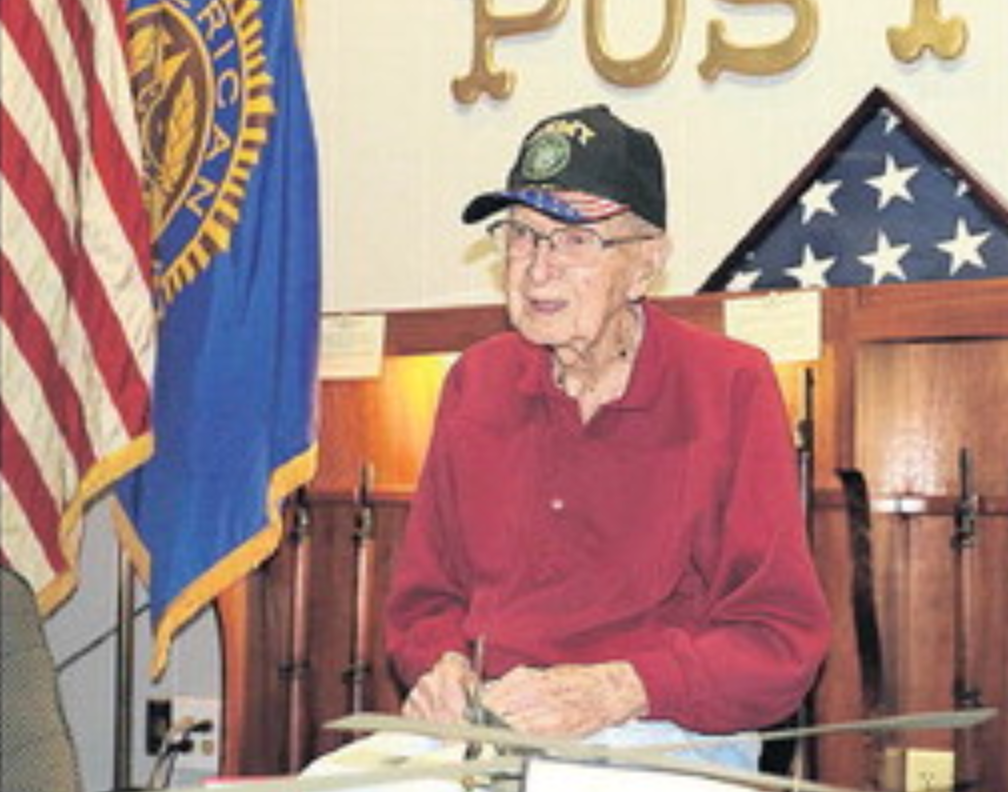 Phillips talking with reporter and author Larry Alexander at the Legion recently.

Phillips talking with reporter and author Larry Alexander at the Legion recently.

Everyone at the Elizabethtown American Legion Post 329 knows Jim Phillips.

Sitting at a table recently with photos, a jagged shard of German shrapnel, souvenir Nazi armband, yellowed three-day pass to Paris and commemorative medals including the National Order of the Legion of Honor from French government spread out before him, the 99-year-old World War II veteran and former post commander fielded well wishes and greetings from everyone around him.

Born in Middletown on Aug. 2, 1921, Phillips was 20 when he was drafted into the U.S. Army in 1942. After basic training he was assigned to the 313th Field Artillery Battalion, 80th Infantry Division (the “Blue Ridge Division”) under Maj. Gen. Joseph D. Patch. The soldiers reported to Camp Forrest, Tennessee. There, Phillips was quickly promoted to sergeant and was put in charge of a forward observation squad that included a jeep and 14 enlisted men with weapons and radio equipment.

“I had no high school diploma, so I don’t know why they made me a sergeant,” he said. “I think they flipped a coin.”

On July 4, 1944, the division loaded aboard the SS Queen Mary for a sea voyage that would end three days later at Greenock, Firth of Clyde, Scotland.

Not everyone made the trans-Atlantic trip.

“There were three older men in my outfit, men in their midto late 30s,” Phillips said.

These men were stopped before boarding and told that, because of their age, they did not have to go overseas if they chose not to. Two accepted the offer but one stayed with Phillips and they soon became friends.

“He never called me sergeant,” Phillips recalled. “I called him ‘Pop’ and he called me ‘Hey Boy.’”

After landing in Scotland, the division was transported by train to Northwich, England, for more training, including instruction in waterproofing equipment for the upcoming crossing of the choppy English Channel. The crossing was made aboard Liberty Ships and ponderous tank landing ships or LSTs, dubbed “Large Slow Targets” by their crews. Phillips and his comrades landed in France on Utah Beach on Aug. 2, 1944, Phillips’ 23rd birthday.

The 80th Division was attached to Gen. George Patton’s Third Army. Phillips recalled the greeting they received from Patton, who was known for his colorful language.

“I’ll tell you what, that man could swear,” Phillips recalled. “Somebody asked, ‘How do we know which Germans to shoot?’ Patton replied, ‘Kill all them lousy blah, blah, blah,’ — all swear words — ‘none of them are any good.’ “But you either liked Patton or you hated him. I liked him. He got the job done. What other generals would take in two or three weeks, Patton took in a week. He’d call in air support and they’d come in and strafe whatever he asked for,” Phillips said.

Before Phillips went into combat, his commanding officer asked if he’d like a three day pass to see Paris.

“I started telling him, ‘Yes, sir, I don’t have any money,’” Phillips said. “He got mad and said, ‘That wasn’t what I asked you. I asked if you wanted to go to Paris.’ I said I’d love to, so he put a blanket on the ground, reached into his pocket and pulled out money and put it on the blanket. Then he asked everyone else, ‘Who wants to help Jimmy go to Paris?’” Phillips was also given American cigarettes, which were as good as cash in Paris. So with the money and a bag full of cigarettes he was off, staying in a Red Cross-managed hotel.

Then it was off to the front.

His first combat experience was at a French village called Pont-à-Mousson. The men came under fire of a large German railroad gun that was concealed in a forest, safe from Allied air reconnaissance.

“When they wanted to fire it, they’d pull this thing out of the woods and open up,” Phillips said. “When the shells hit that town, the ground shook.”

As the “eyes” of a battery of four 105mm field pieces, Philips and members of his observation team were often on the move, staying out in front of the guns and occupying high ground whenever possible to find the best vantage points.

“Every time we moved we had to pick up the (communication) wire, the radios and field phones and carry everything along with us,” he said.

His combat experience included the Battle of the Bulge and liberation of the Buchenwald concentration camp, with all of its horrors of the Holocaust.

One day Phillips, a lieutenant and 12 men were assigned to escort a trainload of Russian soldiers who’d been captured by the Germans back to their own lines. The Soviets wanted none of these former prisoners to flee, so every time the train stopped, Phillips and his soldiers got off and patrolled along the length of the train to make sure no Russians jumped off.

“They didn’t want to go home,” Phillips said of the ex-POWs.

Reaching their destination, they delivered their charges, then stayed overnight before heading back to their own lines. That night, the lieutenant got drunk on vodka and Phillips’ men had to load him onto the train next morning for the return trip.

The engineer, a German who was evidently eager to return, opened the train throttle. Roaring toward a checkpoint the Russians had established on the tracks, it became obvious that the engineer had no plans to stop. One of the Americans yelled, “Hit the floor” as two Russian machine guns raked the train. No one was injured in the fusillade.

“The lieutenant, he never woke up,” Phillips said. “He really had a load on.”

After the war, Phillips moved to Elizabethtown and went to work at Savoy Shoe Co. He married Ruth Kauffman from Tower City in 1956. He joined the Legion post and served as commander in 1963. Phillips, a 32nd Degree Mason, moved with his wife into Masonic Village 18 years ago; she died in 2014.

When he turned 99 last year, Philips was asked what he wanted for his birthday.

“I said I’d never been up in a helicopter,” he recalled. “I had to say something.”

That’s how he ended up flying from Lancaster Airport to Harrisburg International Airport, a trip that included a low pass over Elizabethtown so his friends on the ground could wave.

He doesn’t yet know what he wants for his 100th birthday in August, but noted that he still has time to decide.

For the past two decades, thousands of American women and men have found themselves in harm'…