A West Earl Township retirement community has recorded its first COVID-19 deaths, according to the Lancaster County coroner’s office.

Six Fairmount Homes residents died of the coronavirus, with one death occurring at a hospital and the other five at the retirement community. The deaths occurred between Friday and Wednesday, according to the home.

Willow Valley Communities in West Lampeter Township was the only other community to record nursing or personal-care deaths attributed to the virus, with two. It had no COVID-19 deaths until mid-July. With its two most recent deaths, it now has 12.

Fairmount Homes is “deeply saddened” by the deaths and has “expressed our sincere remorse to the residents’ families,” its president and CEO Jerry Lile said in a written statement.

"As we have seen in long-term care facilities across the country, despite adherence to local, state, and federal guidance to reduce the transmission of COVID-19, the virus is insidious and can disproportionately impact the vulnerable population we serve," Lile wrote.

Fairmount Homes is doing everything it can to limit the virus' spread, he wrote, and Pennsylvania Department of Health did an on-site assessment and verified that it's taking appropriate measures.

The home did widespread nursing home testing in early July and found 10 positive cases among residents and six among staffers, most of whom had no symptoms at the time, it reported.

Lile said all personal-care residents and staff tested negative last week, and all nursing home residents and staffers were retested this week per state Department of Health recommendations. Residents who tested positive are on an isolated floor in its health care unit, he wrote, and most have no or very mild symptoms and are expected to recover.

These are the 32 nursing homes in Lancaster County

The six deaths represent 3% of Fairmount's 114 nursing and 74 personal-care beds. Including independent living, its campus is home to about 400 people.

A written statement from John G. Swanson, CEO of Willow Valley Living, said any death brought about by COVID-19 "is a tragedy and we share in the families’ deep sorrow and mourn the loss of our residents.”

Willow Valley began responding to the threat of COVID-19 in February and has followed and often gone beyond suggested guidance, the statement said, noting that an unannounced Department of Health inspection on July 22 found no deficiencies and no suggestions for improvement.

All 12 deaths have been in Willow Valley's skilled care communities, the statement said, where residents largely have pre-existing, underlying health conditions, and the average age of the residents who died was 92 years.

Willow Valley reported 10 active cases of COVID-19 among its 2,400 residents, and noted that it has recently purchased a variety of "hi-tech sanitation equipment intended to help kill or detect signs of the virus" as part of its efforts.

The coroner's office reported no other COVID-19 deaths this week. Of 390 coronavirus deaths it has reported here since the pandemic started, 327 were residents of such homes and 63 were not. 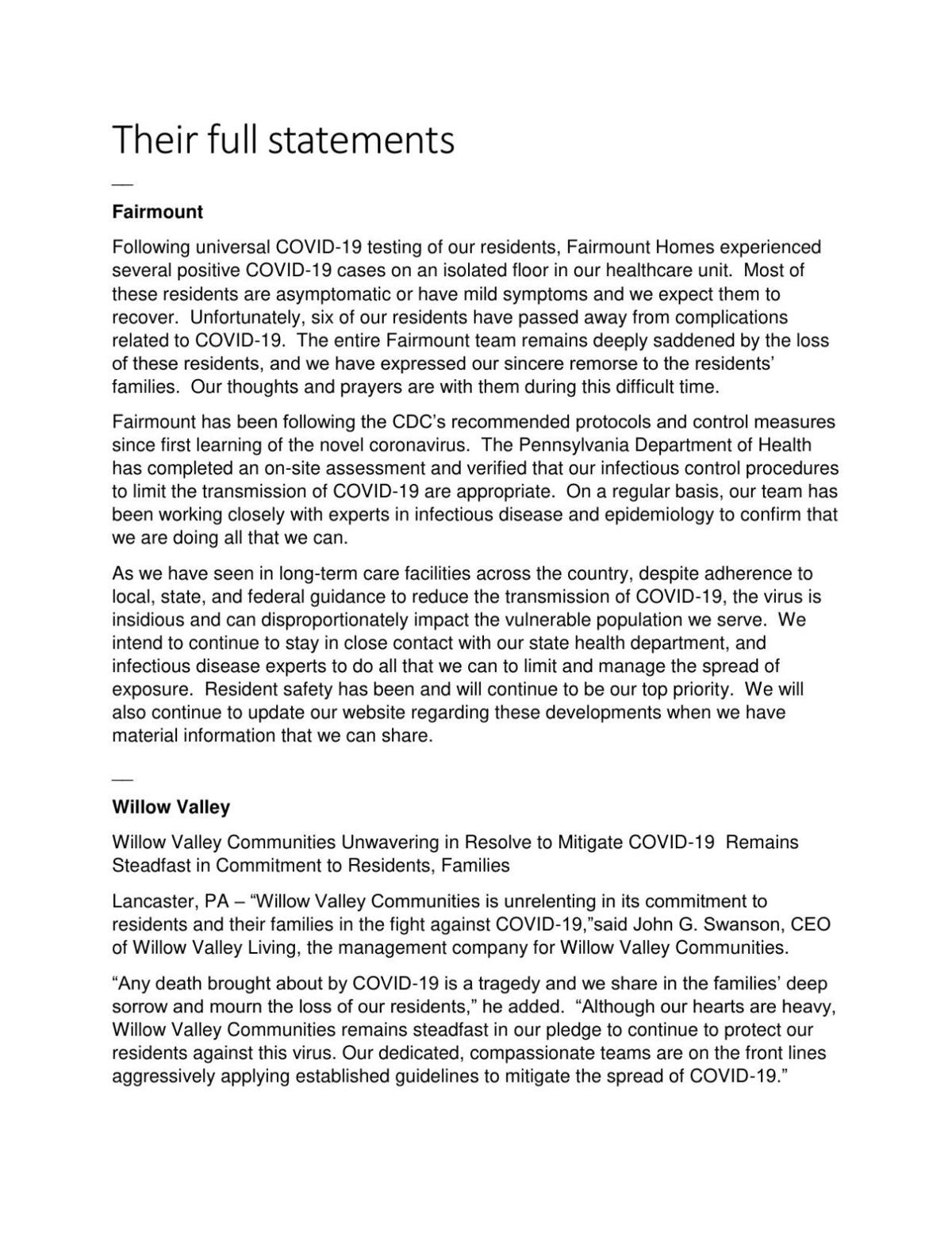 Rise of COVID-19 in people under age 50 is cause for concern, Levine says

At least 3 dozen COVID-19 cases have been reported at Lancaster County schools. Here's where they are [update]

Hospitalizations and deaths are lower, but the rate of new coronavirus cases is slightly higher than it was when Lancaster County first starte…

Lancaster County had just two COVID-19 deaths in the past week, both of them from nursing or personal-care homes, the coroner’s office reporte…