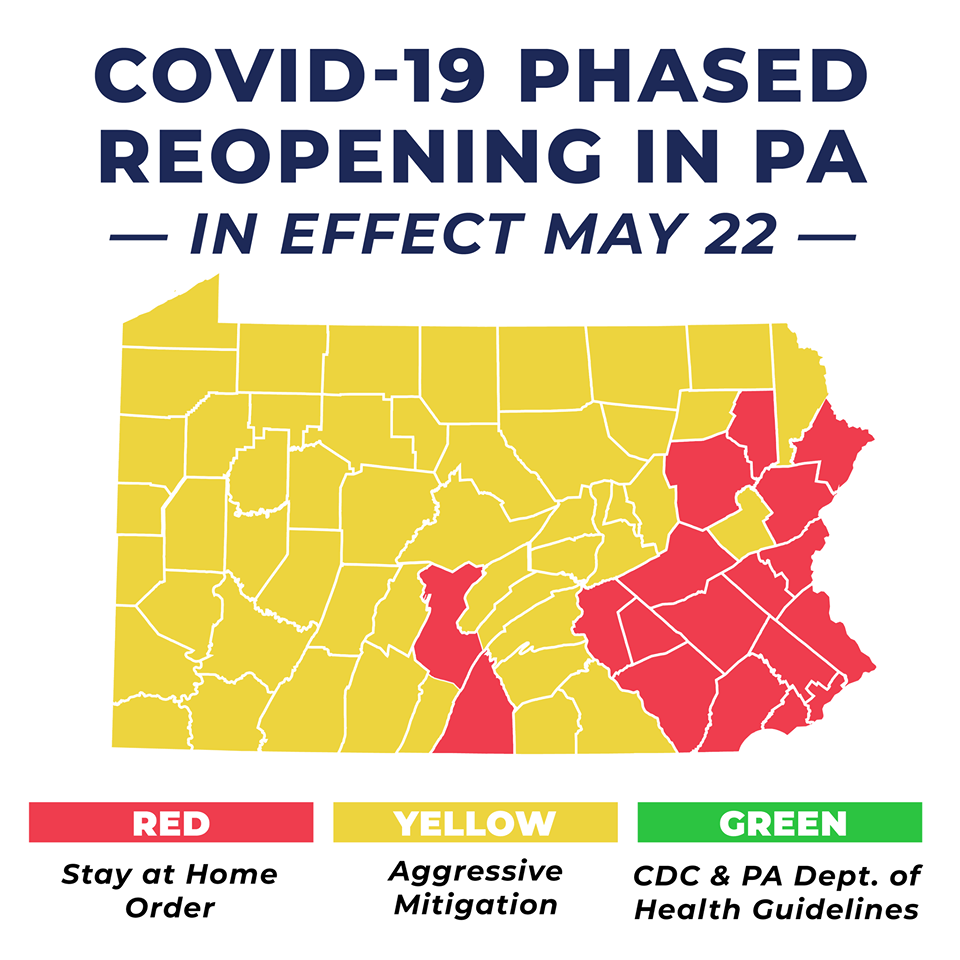 On May 22, 2020, Pennsylvania Gov. Tom Wolf released this map showing which counties are now officially in the "yellow" phase of the state's reopening plan.

Most of the earliest counties that began to reopen have shown good progress. In fact, of the 37 counties that partially reopened by moving to yellow on May 8 and May 15, seven rural counties have had no new cases of coronavirus in the past 14 days, according to an LNP | LancasterOnline analysis of health department data.

They are Cameron, Forest, Jefferson, Montour, Potter, Tioga and Greene.

HARRISBURG, Pa. (AP) — Some counties in Pennsylvania could see practically all of the state'…

Another 16 rural and western counties now in the yellow phase score at one-fifth or lower on Wolf’s key metric for moving from red to yellow: no more than 50 total new coronavirus cases per 100,000 population over 14 days.

Where did the 50 new cases per 100,000 residents over 14 days metric Pennsylvania is using come from?

That metric has made it challenging for the 18 remaining counties in lockdown to begin reopening, although some, including Lancaster, have defied the governor and declared their own move to the yellow phase. Those 18 counties, nearly all in the eastern part of the state, have more than half of Pennsylvania’s population.

But on Friday afternoon, Wolf announced that Lancaster and other southeast counties can move to yellow by June 5, saying that expanded testing and contract tracing has made the 50-cases-per-100,000 population metric "less critical" as a benchmark for a safe reopening.

"That was one of many statistics that we had," Wolf said at a news conference. " ... We have never used that metric exclusively."

Lancaster had 46 new coronavirus cases Friday and it’s score under Wolf’s metric stood at 114, or twice the level the governor has defined as safe for starting limited economic activity.

Wolf has previously made some exceptions to is requirement for a score of 50 or less.

All of Pennsylvania poised for at least a partial reopening

Of 12 counties that received Wolf’s approval last week to move from red to yellow on Friday, three had scores above the threshold. Cumberland County, just west of Harrisburg, scored at 62 Friday. Scores are 58 in Adams County and 54 in Columbia County.

Here are Friday’s scores for each of the 18 counties that remained under Wolf’s stay-at-home order Friday, and where they scored on Wolf’s metric of no more than 50 total new coronavirus cases per 100,000 population over 14 days.

They are listed from closest to meeting the requirement to farthest:

The Latest: Thousands protest across from Lafayette Park

Here are the differences between the red, yellow, green stages of Gov. Wolf's plan to reopen the state

Editor's note: This article was originally published April 23. On May 22 and May 27 Gov. Tom…

Friday's COVID-19 updates: Pa. up to almost 5K deaths, Lancaster County has over 275

Editor's note: This story will be updated throughout the day. Be sure to check back for the …

How do you feel about Lancaster County moving to 'yellow phase' starting June 5? Let us know. [survey]

Lancaster County will move to the "yellow phase" of reopening starting June 5, according to county commissioner Josh Parsons.

Gov. Tom Wolf is set to move Lancaster County into the yellow phase of his reopening plan, along with all other counties.

Editor's note: This article will be updated throughout the day with the latest news regarding COVID-19.

Next Friday, Lancaster and nine other eastern Pennsylvania counties will become the state’s last jurisdictions officially moved from “red” to …