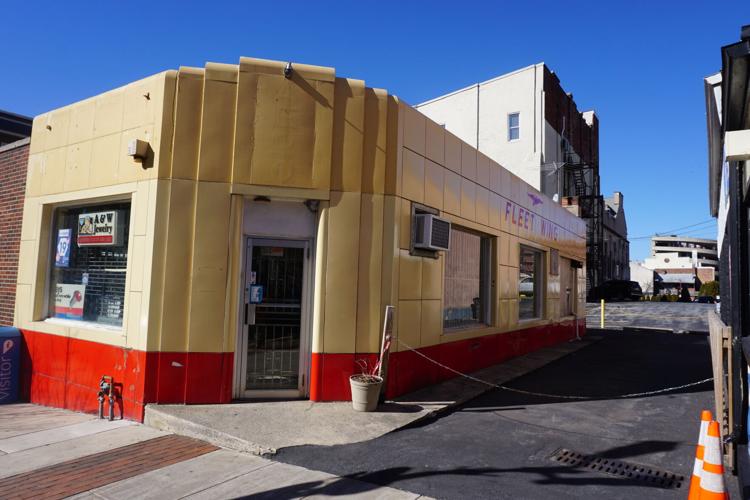 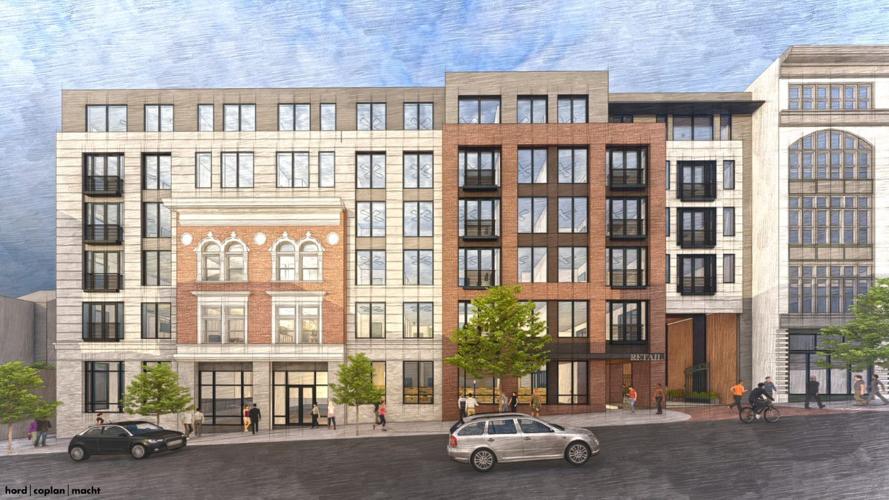 This rendering shows a $35 million proposed apartment and retail development in the first block of West King Street. It would be built atop a parking lot next to the Hager Building (at far right).

This rendering shows a $35 million proposed apartment and retail development in the first block of West King Street. It would be built atop a parking lot next to the Hager Building (at far right).

The owner of the Hager building parking lot on West King Street won a key recommendation from the city’s Historical Commission to demolish several properties needed to make way for a new mixed-use building with more than 120 apartments at the center of downtown.

The recommendation included a key condition: that the developer group, led by local businessman Doug Shand, preserve and store the art deco-style steel panels on a 1940 building on the block that originally housed a Fleet Wing gas station before demolishing the rest of the building.

The issue will go to the city council for a vote in the coming weeks.

The yellow and red building is easy to miss from the street. The storefront is narrow, and the art deco-style porcelain-enameled steel tiles are best visible from the side of the building.

The one-story building, which at one time hosted the Pelican Bar & Grill, is now a retail outfit, A & W Jewelers.

The 1940 building was a concern for the Historical Preservation Trust of Lancaster County, a Lancaster-based nonprofit that promotes preserving historic buildings. The organization published on Facebook earlier this week its objections to its demolition.

The group’s post said the building was a “contributing resource” in a historic district recognized by the National Register of Historic Places.

“The Fleet Wing building is the last one-story building, covered on the outside with enameled steel tiles left in Lancaster and is a piece of early automotive history,” the Preservation Trust’s post said.

The Preservation Trust’s executive director, Danielle Keperling, is also a member of the Historical Commission. She questioned the developer team about its estimates on what it would cost to relocate the 1940 building. In a report it submitted to the commission, the developer suggested it could cost as much as $500,000 to do so.

The developers stood behind the estimates it presented and also showed various other options to preserve at least parts of the gas station building with its porcelain-enameled steel tiles within the development.

They included maintaining the building where it was, or moving it to different spots of the development, all of which created new expenses or lost potential revenue, the group said. Doing so would cut down the number of apartments or creating new construction burdens, like the need to use steel framing to add an additional floor to the proposal, the developer team said.

The commission’s chair, Christopher Peters, said he thought if the developer group couldn’t relocate the building, the solution would be to include it in the plans for the new construction. But “obviously there’s financial hardship with losing the units,” he said, referring to the loss of apartments for the development.

The commission, along with Keperling, unanimously recommended the demolition plan with the condition that Hager Parking Properties remove and preserve the steel tiles.

The other details of the project remained largely the same: It would include between 120 and 130 apartments, 70 parking spaces and a 5,300-square-foot ground-level retail space.

The Hager Parking Properties presentation also billed the project as a “multi-generational” building. The developer group said it is partnering with East Earl Township-based nonprofit Garden Spot Communities to lease a portion of the units.

The structure would be new but preserve the facade of the building at 43 W. King St.

The Historical Commission also saw presentations from other high-profile developments in the city Tuesday night, including a conceptual design presentation for an affordable housing development at 213 College Ave.

About three dozen residents were on hand to witness the presentation or make comments about the proposal.

At a January zoning hearing and a February Planning Commission meeting, residents objected to the density of the 64-unit, five-story building, claiming it would lead to traffic congestion, cause parking problems and that the tall building wouldn’t fit with the surrounding area. Some neighboring blocks on Elm Street and West Chestnut Street feature largely single-family townhouses.

The five-story building meets the area’s zoning requirements, but Lisa Karl, resident of the 200 block of Elm Street whose backyard would abut the apartment building, told LNP | LancasterOnline earlier this month that the development didn’t fit with the rows of townhouses nearby.

Karl also raised concerns about losing sunlight on her property, her neighborhood becoming more congested, and a parking ramp entrance and exit needing to be built on her block to service the building’s parking garage.

“There’s plenty of opportunity and plenty of space in the site to make a dent in the huge need for affordable housing; however, again, the plan is undeveloped and unnecessary and harmful to our neighborhood right now,” Karl said.

The College Avenue development is part of a larger redevelopment of the former St. Joseph Hospital campus. Baltimore-based Washington Place Equities is managing a mixed-use development with market-rate housing, and HDC MidAtlantic is leading three other affordable housing projects in the area.

The 213 College Ave. proposal would include one- and two-bedroom apartments, and 12 of them would be reserved for residents with disabilities.

But HDC MidAtlantic has pushed back on neighbors’ claims in past public meetings, arguing that the area also features taller buildings, like the former St. Joseph Hospital, and the project looks to add income-restricted units to help with Lancaster city’s severe shortage of affordable housing.

In its presentation Tuesday night, it showed historical maps and photos showing the College Avenue block was once home to a four-story tobacco warehouse, across the street from then-St. Joseph Hospital. The site became a surface parking lot by the early 1960s.

An October study from the Center for Regional Analysis at the Economic Development Company of Lancaster County estimated that Lancaster city needed at least 1,160 new housing units to bring its vacancy rate to a healthy level, between 5% and 10%. Data from the 2020 census found the city’s vacancy rate hovered near 2%.

The same study found that a third of city households pay more than 30% of their gross income on housing, a threshold the federal government uses to determine whether a family is “housing cost burdened.”

'We have a vision for Ephrata': New Brossman building owners hope to be catalysts for a vibrant downtown [photos, video]

Ahead of a new parking lot project this year to service Lancaster’s Amtrak train station, co…

Three people stole $1,000 worth of Yankee Candles from an Ephrata CVS last fall, according to police.

A look at the origins of Lancaster's historic Hager Building

At the corner of King and Market streets in downtown Lancaster, just half a block from Penn Square, sits the Hager Building.

Crews are set to begin replacing a bridge next week that spans Pequea Creek and connects Paradise and Leacock townships.

Leaders from Lancaster-based Armstrong World Industries pitched to investors a promising future for its company in the next few years, predict…

Crews are scheduled begin a bridge replacement project March 14 on Cedar Street in Lititz, according to the Pennsylvania Department of Transpo…

Borough officials in Quarryville are asking for public input in an effort to develop an “active transportation plan.”

Crews started a bridge rehabilitation project Monday at Red Run Road in Brecknock Township that is expected to continue to Aug. 4, according t…

New details and renderings from three large residential projects in Lancaster city emerged this week, as part of a Historical Commission meeti…

A key corner property in Lancaster city has been added to a local businessman’s proposal to transform one side of a prominent center-city block.