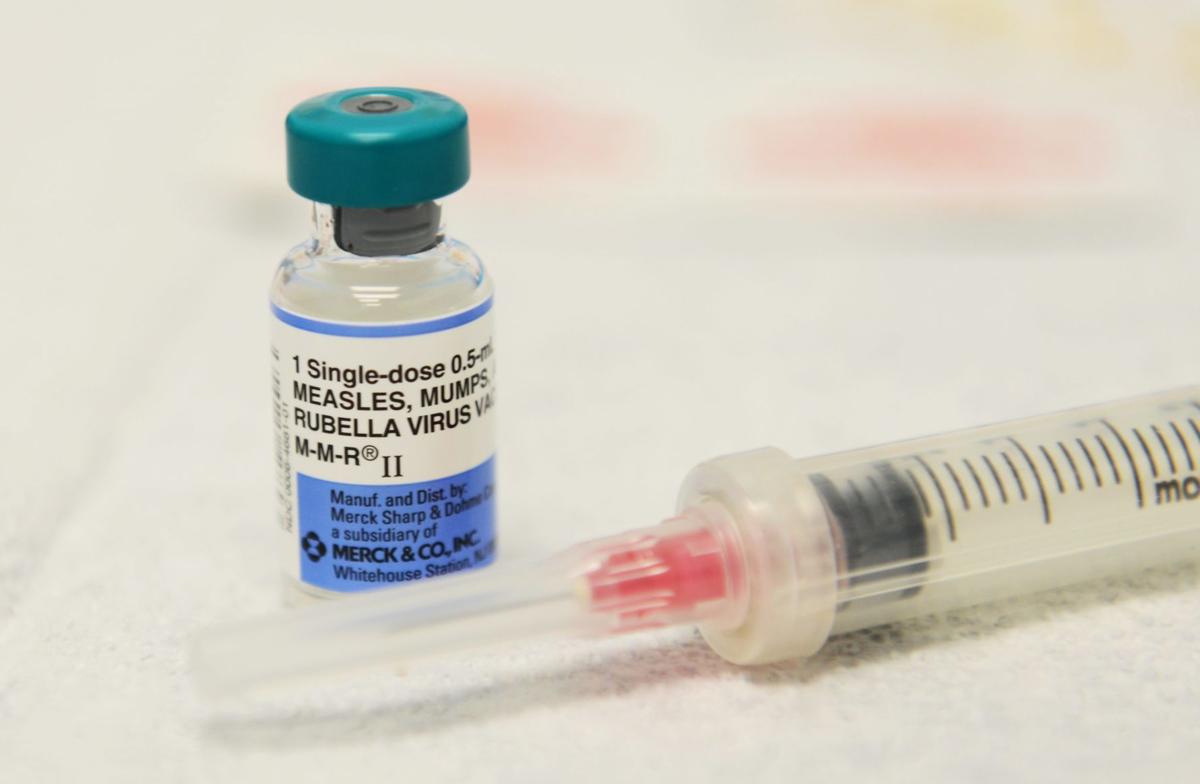 If measles came to Lancaster County, some schools would have little protection against an outbreak.

Overall, up to 9.5% of county students are exempted from some or all vaccinations they would otherwise be required to have, the latest state data shows. Only three rural counties have a higher exemption rate in Pennsylvania.

But more detailed numbers show that exemptions here vary widely by school. Smaller schools are more likely to have a high percentage of students who have not received all recommended vaccinations.

“Measles is extremely contagious,” he said, noting that without vaccination, each person with measles spreads it to an average of up to 18 others. “So the more people who are immunized, the more difficult it is for the virus to spread.”

According to the U.S. Centers for Disease Control and Prevention, measles patients can infect others even before they realize they have the disease.

The Pennsylvania Department of Health does not post school-specific numbers publicly, but at LNP’s request provided four years of data on all local reporting classes — only kindergarten and seventh grade are tracked — that had at least 20 students.

The most recent numbers are for the 2017-18 school year and break out as follows for kindergartners and seventh-graders:

— Public schools on the report had 9,554 students and 377 exemptions, for an average exemption rate of 4%.

— Private and charter schools on the report had 771 students and 94 exemptions, for an average exemption rate of 12%.

— Schools too small to make the report had 1,463 students and 655 exemptions, for an average exemption rate of 45%.

Averaging across all years in the report showed similar numbers.

The second and third groups of schools are both well below the 95% vaccinated rate the department spokesman Nate Wardle said is generally considered the threshold for so-called “herd immunity,” which means a group has enough protection that disease is unlikely to spread from person to person.

Vaccination rates were above that 95% bar in the 2017-18 school year statewide, but below it in Lancaster County, where the overall percentage of students who were current on any given vaccine ranged from 86% to 93%.

Pennsylvania requires that all students have certain vaccinations unless they are exempted.

Private and Amish school students are included, as are home-schoolers and those in cybercharter schools, who must report their vaccination status to the public school districts in which they reside.

Exemptions can be claimed for medical, religious or philosophical reasons.

Exemptions can be for one or all vaccinations and do not have to be renewed annually. More than one may be filed for a student, but because there's no way to tell from the data if that happened, LNP assumed they don't overlap.

Schools must report vaccination and exemption data to the state Department of Health for kindergartners and seventh-graders.

Here’s more on the data and what it shows.

For the 2017-18 school year, 44 religious exemptions were claimed at private and charter schools in the county. Of that total, 20 were for a group of 47 kindergartners at Susquehanna Waldorf School in Marietta, which listed no medical or philosophical exemptions.

School administrator Timothy Altieri said in an email that Susquehanna Waldorf follows state requirements for reporting vaccinations. He declined to say whether the high exemption rate is a concern at the school.

“Like other private schools, our health records are managed by the local school district, which ensures compliance with state laws,” he said.

Altieri said he wasn’t directly involved in the reporting process and wasn’t sure why all the exemptions claimed by parents at the school were listed as religious. The school itself does not have a religious affiliation.

What exemptions are used most?

Overall, philosophical exemptions dominate in Lancaster County; there were 774 among the 11,788 county students in the 2017-18 school year, compared to 127 medical and 217 religious.

However, the proportions varied by type of school.

— Across 9,544 students in the individual public school listings, it was an almost exact split: 118 medical, 126 religious and 125 philosophical.

— Across the 772 students in the listings for the larger private and charter schools, there were three medical, 44 religious and 47 philosophical.

— Across the 1,463 students at all schools with fewer than 20 students in kindergarten or seventh-grade classes, there were six medical, 47 religious and 602 philosophical.

How straightforward is the data?

The big picture is clear, but the details are murky.

Information is reported only for students in kindergarten and seventh grade, and the state provided school-specific numbers only when there were at least 20 students in a class.

Additionally, the Health Department is not definitive on whether home-schooled and cyber-charter students are included in public school class listings; Wardle said they may be.

He also noted some changes in when the data was collected and what was included. He said the department anticipates more consistency moving forward, but that the changes from 2014 to 2017 mean no year-to-year comparisons should be done for those years.

Furthermore, levels vary by vaccine. For instance, although Lancaster County’s overall exemption rate for last school year was 9.5%, the report shows the percentage of students up to date on specific vaccines as 92% for polio and measles, 93% for Hepatitis B and so on.

Can schools refuse to accept religious or philosophical exemptions?

Wardle said that would be up to the school’s administration and legal counsel, and he is not aware of any that have done so.

Can I see numbers for a specific school?

The department provided four years of data for the Lancaster County schools that reported at least 20 students in the classes.

We combined the overall exemption and MMR percentages by class across all the years listed. (Story continues below.)

It hasn’t gotten any harder to get an exemption, but the grace period for students who are neither exempted or fully immunized has gotten much shorter when they start school.

Starting with the 2017-18 school year, regulators imposed a strict five-day cutoff for students who are not fully immunized and haven’t been exempted.

As LNP previously reported, the number of students starting the school year without being exempted or fully vaccinated dropped – from almost 11% to 2.5% statewide, and from almost 17% to 3% in Lancaster County.

How have Pennsylvania lawmakers attempted to address the issue?

In 2015, twin proposals to eliminate philosophical exemptions never made it out of the House and Senate committees to which they were assigned.

Last month, Sen. Daylin Leach introduced Senate Bill 653, which would end philosophical and religious exemptions. The bill is in the Senate Education Committee and lists no co-sponsors.

Meanwhile, House Bill 286, which Rep. Daryl Metcalfe introduced earlier this year, would prohibit insurers and health care facilities and practitioners from “discriminating” against unvaccinated patients. The bill is in the House Health Committee and lists 15 co-sponsors, including Rep. Jim Cox, whose district is mostly in Berks County but includes part of northeastern Lancaster County.

Is the state Health Department working to increase vaccination rates?

Wardle said the department works frequently with school officials, physicians and communities that have concerns, to educate them about the importance and safety of vaccinations.

He also noted that the department is working to set up a meeting with the Clinic for Special Children in Strasburg — which works extensively with the county’s Plain sect population — “to discuss what can be done to increase immunization rates in certain communities.”

What else are schools saying?

LNP reached out to some schools with high rates of exemptions, often because of a handful of exemptions in classes of 20 or so students.

“I feel that parents should be empowered to make the decisions that they feel are best for their children,” said Joshua Good, administrator of Ephrata Mennonite School, where four years of reports show an average exemption rate of 19% for kindergartners.

Robyn Stearne is head of school at New School of Lancaster, where three years of reports show an average exemption rate of 9% among kindergartners.

She said this year there’s one medical exemption on file there, and her biggest concern is how to protect that student.

If an outbreak of measles or other disease came to the area, she said, “I would be reaching out to the Health Department to see if I should be restricting attendance from the non-vaccinated.”

Stearne also said that in the past few weeks three or four parents, particularly those with infants at home, have asked about the school’s vaccination rates in light of the measles outbreaks across the country.

One year of data from Shalom Mennonite School in Terre Hill shows a 35% exemption rate among seventh-graders.

An emailed statement from the school said it doesn’t hear much from school families about vaccinations, and those who have opted for exemptions often express reasoning based on experiences of family members.

The statement described an overall sense of “respect within our patron body for the individual choices of each family,” and said that those who contract diseases they have chosen not to vaccinate for are generally very careful “to honor the other patrons by keeping their children at home for the duration of the disease.”

Have there been any measles cases here lately?

The U.S. case count is at a 25-year high already, with 971 cases confirmed across the nation, including seven in the Pittsburgh area.

Pennsylvania averaged two confirmed measles cases per year from 2000 to 2018, according to Wardle, with the most recent related death in 2003. He said the last case recorded in Lancaster County was in 2001.

Traffic delays along Route 283, Route 722 expected from Monday through Wednesday

If parents refuse to vaccinate, some doctors ask them to seek care elsewhere

Proposed bill would end philosophical exemptions for immunizations in Pa.

They are the most commonly requested exemptions in Pa., with 3,300 granted last school year.

Pennsylvania officials confirm 1st measles case of the year; here's who might need to get vaccinated

We have responsibility to get vaccinated against measles [opinion]

Seemingly out of nowhere, the number of measles cases in the United States has reached its h…

The National Weather Service has issued a severe thunderstorm warning for central Lancaster County until 7 p.m.

How measles detectives work to contain an outbreak

In the course of Clark County’s outbreak, 237 people spent 19,071 hours doing outreach, investigation and monitoring the health of people exposed, at a cost of more than $864,000. They investigated 53 exposure sites, including 15 schools and the arena where the Portland Trail Blazers play just across the state line in Oregon.

30 years after starting Strasburg clinic, Dr. Morton dedicates another in the Belleville area

Thirty years after founding the Clinic for Special Children in Strasburg, Dr. D. Holmes Morton is about to open a similar nonprofit clinic abo…

As California lawmakers attempt to tighten the rules on childhood vaccinations, they’re getting pushback from unexpected quarters: high-profil…

8 of the 1,044 confirmed U.S. measles cases have been in Pennsylvania

A total of 1,044 measles cases have been confirmed in the U.S. since the beginning of the year, and eight of them were in Pennsylvania.

Second case of measles suspected in York County: here's how to find out if you might have been exposed

There is a second suspected case of measles in York County, according to the Pennsylvania Department of Health.

A licensed practical nurse has filed a lawsuit against Penn Medicine Lancaster General Health, claiming religious discrimination in her dismis…