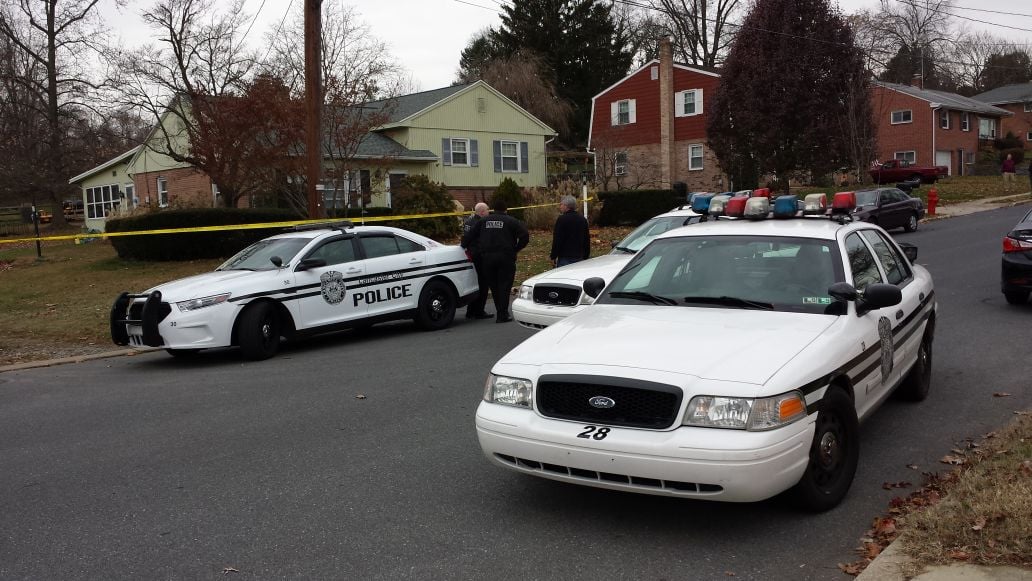 Lancaster City Police respond to a shooting in the 600 block of Euclid Avenue in late November, one of more than a dozen incidents of violence that have shaken the city over the past few months. 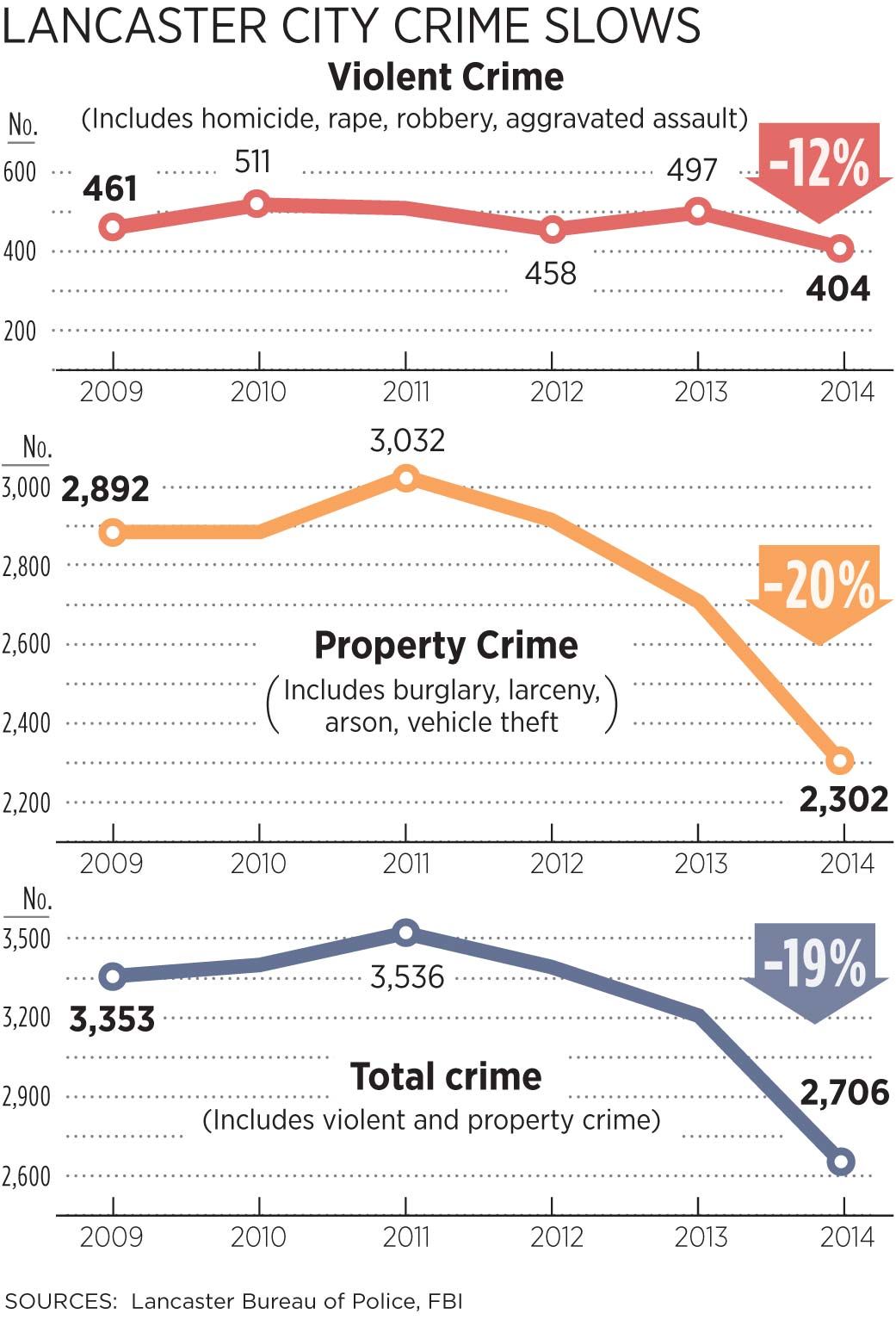 Lancaster City Police respond to a shooting in the 600 block of Euclid Avenue in late November, one of more than a dozen incidents of violence that have shaken the city over the past few months.

Which of the following is true:

1. The City of Lancaster is a violent, dangerous place.

2. Crime in the city has decreased for four straight years, and the crime rate is well below what it was a decade ago.

A recent surge in violent crime — at least 10 shootings and three stabbings in the city since the beginning of November —  has created the impression that the former is true, that crime in Lancaster is out of control.

But statistically, at least, Lancaster is safer than it's been in years.

Late last week the Lancaster Bureau of Police released the year-end 2014 crime figures showing that even though the number of murders and rapes edged up last year, overall violent crime fell 19 percent last year. And property crimes —  burglary, larceny/theft, motor vehicle theft and arson  — fell to their lowest rate in more than a decade.

According to federal crime data, while Lancaster consistently has one of the highest crime rates of any third-class city in Pennsylvania, the crime rate here and across the state has fallen steadily since the early 2000s.

But the narrative belies the numbers. And Lancaster Police Chief Keith Sadler gets it:

"At the end of the day, people don't want you to rattle off statistics," said Sadler.

"They just want to know if they're safe in their neighborhood."

The gunplay since early November has shaken that faith, city leaders acknowledge.

On Wednesday, Sadler, Lancaster Mayor Rick Gray and others will take part in a community forum on crime. Sponsored by LNP, it will be held at the Lancaster County Convention Center - and the event's already filled up.

Online, city residents and observers have been venting their anger at the Gray administration, blaming the wave of violence and the persistence of crime in general on policies they see as too focused on downtown — and not focused enough on the neighborhoods, where most city residents live and most crime takes place.

Gray has rejected the characterization. Despite the recent shootings and stabbings, he thinks most city residents have been able to keep crime in perspective. "When I'm out on First Fridays, I ask people, 'Do you feel unsafe?' " Gray said. "And they say 'no.' If you look at downtown Lancaster, and to a lesser degree the neighborhoods, more people are out and about — and the more people that are out, the less likely (crimes) are to occur."

But numbers tell a story

Still, crime in Lancaster has tended to be higher than most other third-class cities (cities with a population under 200,000).

An LNP analysis of FBI Uniform Crime Data found that in 2013, the latest year for which comparative figures are available, Lancaster had the fourth-highest crime rate among more than 50 third-class Pennsylvania cities — higher than York and Reading (figures for Harrisburg were not included in the FBI's data).

And Lancaster's crime rate consistently ranks in the top five of all Pennsylvania cities with a population over 10,000.

The FBI specifically warns against ranking cities on the basis of Uniform Crime statistics, saying the numbers can paint an incomplete and inaccurate portrait of public safety. The FBI figures aren't comprehensive, and don't include every crime. The warning is routinely ignored by outlets that produce reports about "America's safest/most dangerous cities."

One such outlet, the real estate site Movoto.com, last year pegged Lancaster as the 13th most dangerous small city in America, based on 2012 FBI statistics.

Gray said statistical blips never paint an accurate picture of a city or life in it.

"A few years ago, we had two people die in a fire, and a firefighter almost died," he said. "Less than six months later, five people died in a fire. And there was all this consternation; 'What's going on?' But I don't think anyone's died in a fire since."

Yet crime is an evergreen political issue here. Former Lancaster Mayor Charlie Smithgall, a Republican who served from 1998 to 2005 and has since lost twice to Gray, has consistently charged that crime has worsened under Gray — most recently in a letter to the editor published by LNP Jan. 2.

Smithgall has pointed to his final two years as mayor, when violent crime was down noticeably. Smithgall has credited community policing and a more aggressive approach to law enforcement. Now, he charges, police are in more of "reactive" mode.

But according to the city’s 2014 figures, the 404 violent crimes recorded here last year were the lowest single-year total since 2004 — Smithgall’s second-to-last year in office.

Experts have said the crack cocaine epidemic of the late 1980s and early 1990s led to a spike in violence nationwide. “Smart” policing methods were developed in response, and incarceration rates rose.

Sadler credits “smart” policing methods, including the use of crime analysts who track trends and identify “hot spots,” as a factor in the gradual decline of crime rates here in recent years.

Dr. Frederika E. Schmitt, an Associate Professor of Sociology at Millersville University, says some experts also think a stronger social safety net has played a role. And in Lancaster, police have partnered with Millersville on an array of crime-fighting initiatives.

"The partnership between the police and the community is essential in reducing crime," she said.

The media, she said, can create the impression that crime is out of control even when it's falling. Social media may exacerbate that trend.

Chief Sadler is wary of trying to change the way people feel about crime in the city by touting the statistics and claiming police are winning the war on crime.

“Every year we could hold a press conference and pat ourselves on the back for crime dropping,” he said.

“But if you’re going to pat yourself on the back when the crime rate goes down, what happens when it goes up?”