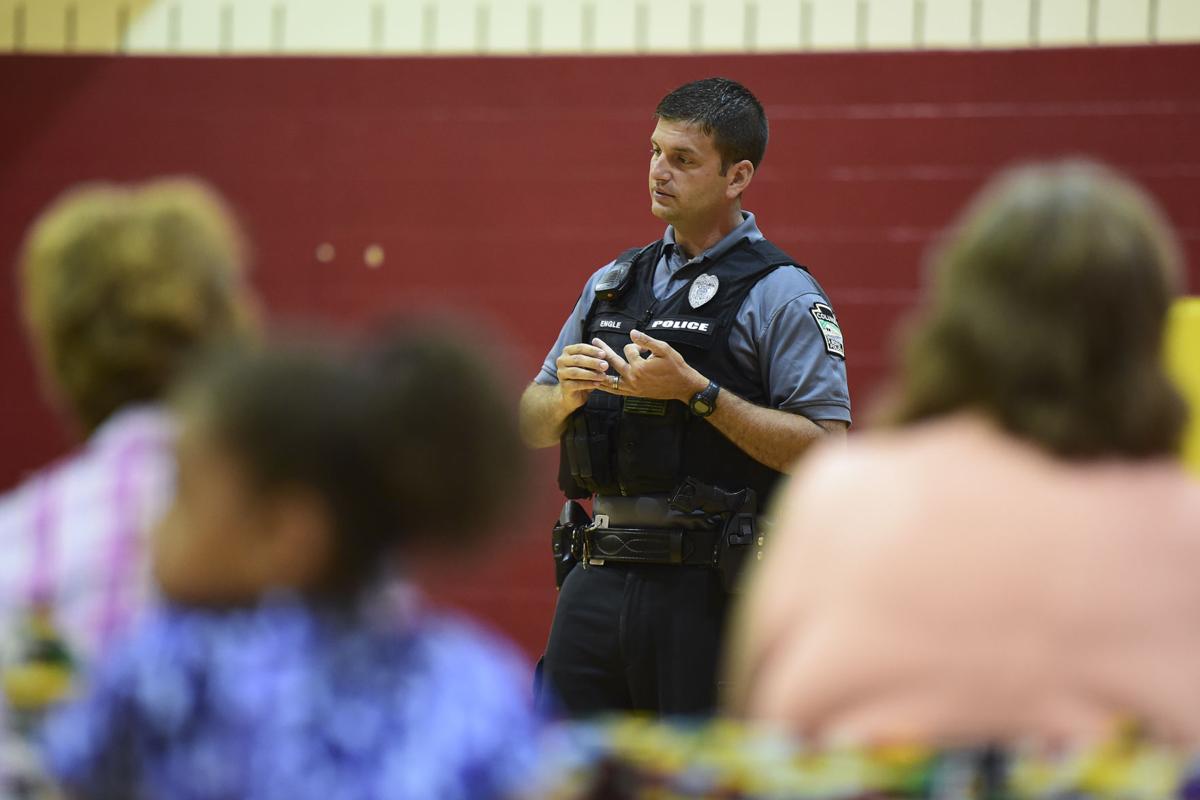 Officer Troy Engle of Columbia Borough Police Department speaks to a group of children at a meet-and-greet event at Park Elementary School in Columbia on Aug. 2, 2016. Engle is the school resource officer, whose position is supported by state school safety funding.

From so-called “tribal classrooms” to a school bus surveillance program, several school districts in Lancaster County are upping their security efforts thanks to nearly $1 million in state grant money.

Approximately $12.5 million was reserved for any district that applied to receive a $25,000 grant. Each of Lancaster County’s 17 school districts received one of the $25,000 grants.

Reviewers at the Pennsylvania Commission on Crime and Delinquency scored each school district’s application and awarded funds to 231 school districts, according to state records obtained by the media outlet Keystone Crossroads.

School districts across the state were approved to spend tax dollars on anything from bulletproof vests, yoga classes and cameras with “night vision,” according to Keystone Crossroads’ report.

The Columbia Borough School District received the most funding within the county, with grants totaling $361,610 to replace its aging public address system, support the school resource officer position and create a visitor management system.

The 15-year-old intercom system was desperate for an update, said Columbia Borough Superintendent Tom Strickler. The system sometimes shorted out in the elementary school, he said, presenting a security and safety risk.

This grant also allows them to support school resource officer Troy Engle, who is a Columbia Borough police officer based out of Columbia High School. The school district pays his salary and benefits during the academic year, and he returns as a patrol officer during the summer.

“We think, from our standpoint being a high poverty school district and not having a lot of tax revenue, this is an awesome way for us to collaborate and partner with the state to improve the safety and security of our students, as well as our staff,” Strickler said.

The Manheim Township School District also used its $174,337 in state funding to support a staff position. The district hired Jamie Falgie as a mental health social worker, who will work alongside its current social worker Roseanne Myers to bring “mental health resources to our students and families,” district spokesperson Marcie Brody wrote in an email. This money will support Falgie’s position for the next two years.

“Ultimately, we learned that the demand for school safety initiatives is high throughout Pennsylvania, and that our schools are very much invested in the safety of students and staff,” said Charles Ramsey, the chairman of the Pennsylvania Commission on Crime and Delinquency.  “The resources we had were only able to meet a portion of the funding requested, but through the continued funding of this program, we are hopeful to reach more schools next year.”

This fund will be available again this academic year for schools to apply. The Pennsylvania Commission on Crime and Deliquency has not yet posted its applications for next year.

Solanco School District will use its $135,939 grant to purchase school bus cameras and create “advanced schematics” of its district buildings to provide first responders in the event of a crisis, Superintendent Brian Bliss said in a statement. These projects are “part of our larger commitment to safety and security” by Solanco, and will both be implemented for the 2019-20 school year.

Lampeter-Strasburg School District is expanding its intercom system with its $65,918 grant to fill places “where building-wide messages can’t be heard,” according to state records. For example, there was no communication method between the high school and its performing arts center. This gap has either been filled or a fix is underway, spokesperson Anne Harnish wrote in an email.

The Lancaster-Lebanon IU will use its $167,240 grant to bring its current part-time chief of police to full time, add trauma-informed professional development trainings and bring its Lebanon County office to the “security standards” of other IU buildings, according to state records.

The Conestoga Valley School District will also add trauma-informed professional trainings for staff in hopes of creating a “trauma-informed ecosystem” using its $85,135 grant, according to state records. Officials will also create “tribal classrooms” across all grade levels and install surveillance cameras and a visitor management system.

Tribal classrooms are teaching environments that have a sense of connection and belonging for students, which helps them regulate their emotions and anxieties. The practice is promoted in a book authored by a Pepperdine University professor, Louis Cozolino.

Trump end run around Congress raises questions on his claims

Beneath the pencils and notebooks on some back-to-school shopping lists is an item that encapsulates the angst felt across the country following another round of mass shootings: bulletproof backpacks.