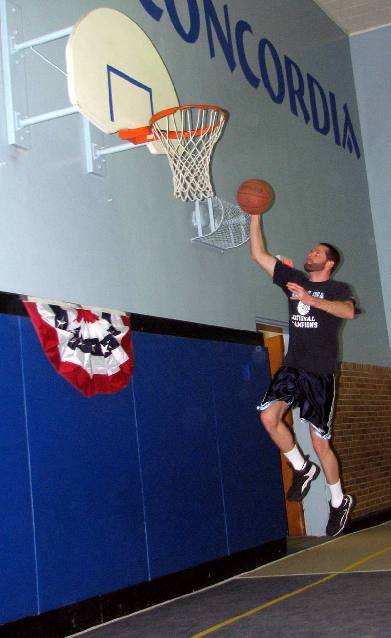 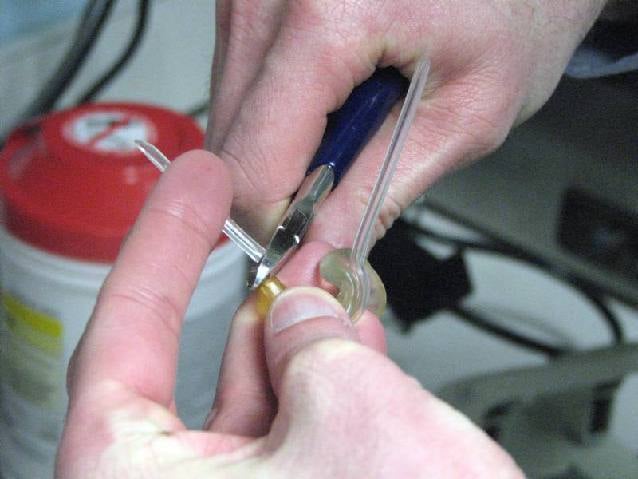 Horan cleans and repairs a hearing aid for a client. (Sunday News/Jeannette Scott) 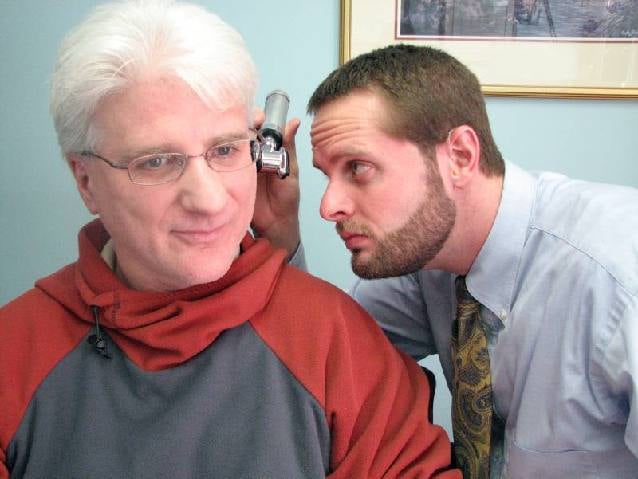 Horan cleans and repairs a hearing aid for a client. (Sunday News/Jeannette Scott)

WASHINGTON - Ryan Horan was warming up at the Concordia Lutheran School gym in Hyattsville, Md., about an hour from his home in Washington, D.C., last month.

At 28, the former Manheim Township High School basketball player still likes to get in on an occasional pickup game after work with a few other 20-somethings at the grade-school gym.

The 6-foot-3-inch player was putting up shots from the corner, the wing, the top of the key, without a hint of the debilitating problem that took him out of the game almost a decade ago.

Ryan was named Township's outstanding offensive player of the 1998-99 season, in spite of a hearing impairment that caused his equilibrium to deteriorate that year.

The hearing loss presented challenges on and off the court. But each one led him closer to his calling.

In May, Ryan will finish an externship at Professional Hearing Services - The Dizziness and Balance Center in suburban Washington, and receive a doctoral degree in audiology from the George S. Osborne College of Audiology at Salus University in Elkins Park.

An audiologist is a licensed health care professional who diagnoses, evaluates and treats hearing loss and balance disorders.

Ryan himself has faced progressive hearing and balance loss since childhood. He speaks well, but understands others via hearing aids and lip-reading.

At the Maryland gym, he was warming up in a dark-blue North Carolina T-shirt, matching shorts, and two sweat-proof hearing aids.

Just as in high school, the only razzing he took was that of friendly put-downs from the guys.

"Oh, you ever heard the saying, 'White men can't jump?' " teased the coach.

Ryan shook his head and smiled as the two bumped fists.

Off the court, Ryan had to do more than hop. He's had to sky over challenges.

When he was 11 months old, a viral infection caused Ryan to suffer a 105-degree fever that caused seizures.

He recovered after three days in the hospital, but it would be three years before the full extent of the damage from the fever would be known.

As a toddler, Ryan began to cock one ear toward the TV when he sat near it. If he was lying on the couch with an ear against the cushion, he didn't respond to his mother's voice.

His parents, Ray and Susan Horan, of Manheim Township, took him to a Philadelphia pediatric otolaryngologist. He told them their son had severe hearing loss as a result of the fever during infancy, they said.

The couple didn't fret over the news, Ray said. "It was always like, 'OK, what's the next step?' "

A big stride came at age 5, when Ryan got the first hearing aid for his left ear. He was an easygoing kid and didn't seem to mind, his parents said.

But in fifth grade, when Ryan got a device for his right ear, "There might have been a few tears shed," his father said.

Any self-consciousness was swiftly overcome because other kids didn't tease Ryan.

"I think part of that was that I was pretty good at sports, so a lot of times that helps to make friends, too," he said.

There were obstacles, however.

By the end of elementary school, he used a system that transmitted the teacher's voice from a microphone, through a device Ryan wore around his neck, then to his hearing aids. Later, he got a different system that fit over his hearing aids to pick up the signal.

One teacher used it to convey inside jokes.

He would stand in the hall and talk to Ryan through the system about tricks he would play in class.

Ryan did struggle with foreign languages because he couldn't hear the consonants. "So I took Latin just because it's not really a spoken language," he said.

At home, the biggest challenge was keeping track of hearing aids. Once, Ryan lost a pair costing $4,400.

"Thank God they were under warranty," he said.

Trouble on the court

In spite of sweat-proof hearing aids, it was a challenge for the '99 Manheim Township graduate to discern the instructions of his high school coach, Jim Kreider, during games.

"I had to learn to look for and read the coach's play calls," Ryan said.

With fatherly prodding, Ryan practiced hard. "He was always there pushing us," Ryan said of his dad's support for him and his siblings, Sara Lamichane, 30, and Colin Horan, 25.

It paid off. In his senior year, Ryan led the varsity team in scoring and Gettysburg College recruited him.

That was in spite of the dizzy spells that would eventually bench his basketball dreams.

The first time, Ryan was light-headed for several days leading up to a high-school game.

Then, during that game, he suddenly felt like he was spinning on a merry-go-round. He could barely keep his balance; he went to the restroom and threw up. Still dizzy, he spent the rest of the game on the bench.

The dizziness lasted for days. He also suffered a bad headache.

After several more episodes that year, University of Pennsylvania doctors determined that Ryan's inner ears were deteriorating, eroding his equilibrium.

At college in Gettysburg, the episodes continued, sometimes during basketball season. Each one benched him for a few weeks. In the middle of his sophomore season, he threw in the towel.

Ryan directed his focus to his study of business management. He wanted to get into sales.

Ryan took one final shot at the court, though. Nudged by his dad, he tried out for the U.S. team for the 2001 Deaflympic Games in Rome. Held summer and winter every four years, the games are an alternative to the Olympics for athletes who are deaf.

"We had three days of tryouts that were definitely pretty competitive," Ryan said.

Ryan made the team, which took the Gold, beating Slovenia, 85-75.

When the center was injured in one game, Ryan - a small forward - had to take over for him. It's not his favorite position to play, but he scored about a dozen points in that game, Ryan said.

Ryan was not allowed to wear hearing aids at the Deaflympics. Without them, he is only vaguely aware of sounds.

Again, he had to adapt to "hear" the coach - this time, because he didn't know sign language.

He had never needed it. Ryan adapted well in public schools, teams, and social settings with hearing devices and lip-reading, his parents said.

The Deaflympics was Ryan's first encounter with a deaf community. He had always lived in a hearing world.

Within their own social, educational or other groups, people who are deaf share language, attitudes and behaviors that differ from mainstream society, according to an article on National Public Radio's npr.org. They refer to this as deaf culture.

"The deaf community was a lot different," Ryan said. "It was difficult because I couldn't connect with them like I wanted to."

Becoming an audiologist was never in Ryan's playbook.

After graduating college in 2003, he worked in sales, first at Northwestern Mutual Financial Network, in Manheim Township, and later at Cintas, in York.

"Ryan was able to build trust and likeability right away, which you need to get people to trust you with their finances," said Northwestern's Managing Director Michael J. Maletteri. "He was one of our top producers."

However, he said, "I think Ryan wasn't sure what his calling was in life."

"I liked the whole business aspect of meeting people and helping people with their money, their future," Ryan said.

But it wasn't enough.

"I kind of looked for something that I could … feel better about what I'm doing in terms of helping others."

Again, his father became his coach.

Ray Horan suggested his son take up audiology. Ryan could work his way into having his own practice and help people from both his training and personal experience, Ray said.

"I never really saw it as a way to have your own business before," Ryan said. "And even better was helping people with similar issues."

Ryan stepped into a new ballgame, returning to college at Salus University. He expects to work in Delaware upon receiving his doctorate, and hopes to someday have his own audiology practice.

"I think he's a lot happier," his sister, Sara said. "He talks about it with a lot more enthusiasm than anything else he's ever done."

She had trouble hearing, particularly the voices of women. Ryan was her third stop in two days on a search for an audiologist she felt she could trust.

She sat opposite Ryan at his desk, grasping the purse in her lap. "I'm getting frustrated now, and it's an expensive proposition," she said of the $2,600-per-hearing-aid purchase.

Test results told him a lot. But he wanted her to voice her concerns. Ryan's pet peeve, his father said, is when someone doesn't listen.

He summarized the data in layman's terms: "So you can hear somebody when they're talking to you, but you can't understand them."

"He sat here and explained everything to me," Joyce said later. "No one else has taken the time to do that."

Back on the court at the school gym, Ryan played with other men who didn't hang up their Air Jordans after college.

Ryan wasn't dizzy that day. In fact, he rarely experiences that these days. His brain has adjusted to rely more on his sight and muscles where his equilibrium now fails, he said.

Ryan didn't win, but came close. He didn't want for baskets, but he's not shooting to be the next LeBron James. Dr. Horan suits him just fine.

"I just kind of go with what's been given to me and try to make the best out of it," he said. "And that's what I've kind of done with the hearing loss, trying to make something positive out of it, rather than making it something negative."