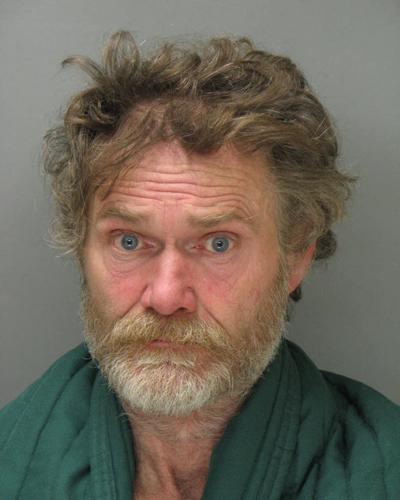 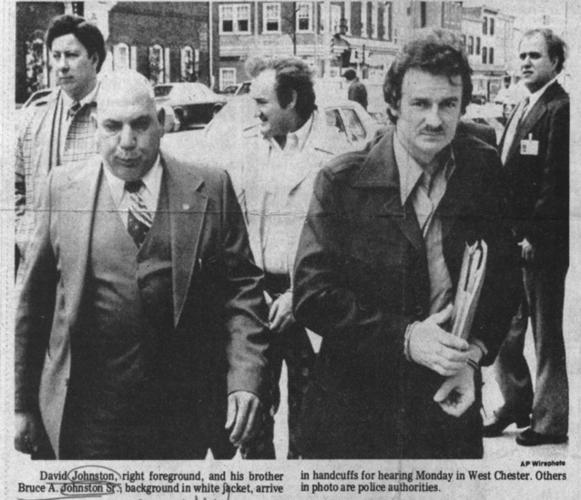 The leaders of the infamous Johnston Gang are led into court in West Chester in this March 1979 file photo. Bruce Johnston Sr., front right, and his brother David Johnson, rear middle, were convicted of numerous killings. (Associated Press)

The leaders of the infamous Johnston Gang are led into court in West Chester in this March 1979 file photo. Bruce Johnston Sr., front right, and his brother David Johnson, rear middle, were convicted of numerous killings. (Associated Press)

Years ago, Bruce Alfred Johnston Jr. was known as "Little Bruce" - perhaps an appropriate moniker only when weighed against the wicked company he kept.

His father, Bruce Johnston Sr., and two uncles were heads of the notorious Johnston Gang of the 1960s and '70s. All three brothers eventually were locked up for life for numerous murders and thefts in Chester and Lancaster counties and beyond.

"Nothing in my experience ever compared to what they were," Ray Solt, a since-retired police officer who tracked the gang, said this week. "They were damn good at what they did."

Bruce Jr. operated, under his father's watch, the "Kiddie Gang," a group of teen thieves.

Ultimately, it was Little Bruce's powerful testimony that put away the three brother bosses.

Following sensational trials that included tales of paid hits, stolen John Deeres and Corvettes and drugs by the ton, Bruce Jr. was placed in the witness-protection program. He lived in Wisconsin and North Carolina, seemingly off the grid.

His departure from a life of crime, however, proved only temporary.

Now 55, he's facing a lengthy prison sentence for felony drug-dealing here. A district judge on Tuesday ordered he stand trial for selling methamphetamine to an undercover officer at a McDonald's in Gap.

Bruce Jr. only avoided a long prison term decades ago after taking the stand against three of the most dangerous criminals in our region's history: Bruce (Sr.), David and Norman Johnston.

"Nothing was comparable to them," recalled Lancaster County President Judge Joseph Madenspacher, a prosecutor back then.

Bruce Jr.'s return to prison reminded local legal experts of the profitable gang initially presumed to be a group of clueless "country bumpkins."

"That's probably one of the reasons they got away with it for so long," recalled Judge Dennis Reinaker, a defense attorney then who represented a Johnston Gang affiliate.

"They were basically hillbillies," Solt said. "I don't remember any of them ever holding a real job."

Solt estimated there were "hundreds" of other heists.

Said Reinaker, "In fact, they were one of the most cunning and sly groups of criminals I've ever encountered or heard about. One of the most cold-blooded as well.

"It's still probably the most compelling account of organized criminal activity in Lancaster County during my tenure."

On Tuesday, he hobbled into District Judge Isaac Stoltzfus' courtroom in an orange prison jumpsuit, shackled at the wrists and ankles. Portrayed by Sean Penn in a 1986 movie version of the Johnston story, he's now a slight man with graying hair and a gray beard, sporting faded tattoos on both forearms. Two armed constables watched over him as he walked gingerly.

In the mid-70's, Bruce Jr. was a teenager getting his first taste of the criminal path cut by his senior relatives.

"It worked pretty well for a while," Bill Wheatly, a retired Lancaster defense lawyer who represented Norman Johnston, recalled this week. "Then they got greedy. They'd steal anything, and that's when it all fell apart."

Bruce Jr. was one of the few affiliates with the nerve to take the stand against the bosses, who were known to ruffle potential trial witnesses.

Reinaker learned that in the late 1970s while representing James Lee Dotson, a gang associate charged with stealing tractors in Adamstown.

Reinaker advised Dotson that providing information about the Johnston brothers would only help his cause.

But Dotson wanted no part of it.

"He told me I had no idea what these people were capable of," Reinaker recalled.

"They were all scared," Solt recalled. "With good reason."

Bruce Jr. became a state witness in 1977 only after hearing that his father had raped his girlfriend, 15-year-old Robin Miller.

"They never rolled over on each other," Wheatly said. "That's what Little Bruce did that was so terrible and earned him a death sentence from the guys."

Four other members of the "Kiddie Gang," plus Robin, were killed after the senior Johnstons learned they were talking to police.

Bruce Sr. personally ordered the execution of his son, according to published reports. The plan was to "croak Little Bruce" and "blow (his) brains out," according to trial testimony.

On Aug. 30 of that year, Bruce Jr. started getting antsy.

"He wanted to see Robin," Wheatly said. "And that's when he was ambushed."

According to reports, Bruce Jr. and Robin had returned home from Hersheypark when bullets bombarded their Volkswagen Rabbit.

Bruce Jr. was hit at least eight times, but miraculously survived. Robin was killed by a single bullet to the throat, according to reports.

Locals provided these portraits of the brothers:

Bruce Johnston Sr: The believed founder and leader of the gang, Bruce Sr. also earned a reputation as a skilled getaway driver.

"He was known to be absolutely fearless behind the wheel," Wheatly said. "It drove the cops crazy."

He was serving consecutive life sentences for six murders when he died in 2002 at a state prison in Graterford. He was 63.

In 1985, he was tried for - and acquitted of - killing a prison inmate by setting fire to the man's cell. According to reports, he smiled when the not-guilty verdict was announced in court.

David Johnston: Known as the brains of the operation, he often cased burglary targets for alarm and surveillance systems. He also knew how to bypass them, Solt said.

Now 65, David is serving consecutive life terms at a state prison in Waynesburg for four murders.

"That guy could look at you and scare the hell out of you," Wheatly said.

Norman Johnston: Described as a "nitwit" and a "party guy," he returned to the media spotlight when he escaped from prison in 1999. He was free for 20 days until he was caught in Kemblesville, Chester County. Police were tipped off to his whereabouts after Johnston asked a gas-station clerk how to operate a fuel pump.

"He was, in my opinion, the follower of the group," Solt said. "I don't think he had the brain power to be the leader."

"Norman was the real dunce," Wheatly said of his former client, now 62. "They referred to him as a screw-up, pure and simple."

In the days after the Meadia Heights burglary in 1975, police stopped Norman in Avondale - wearing a shirt with the club's logo.