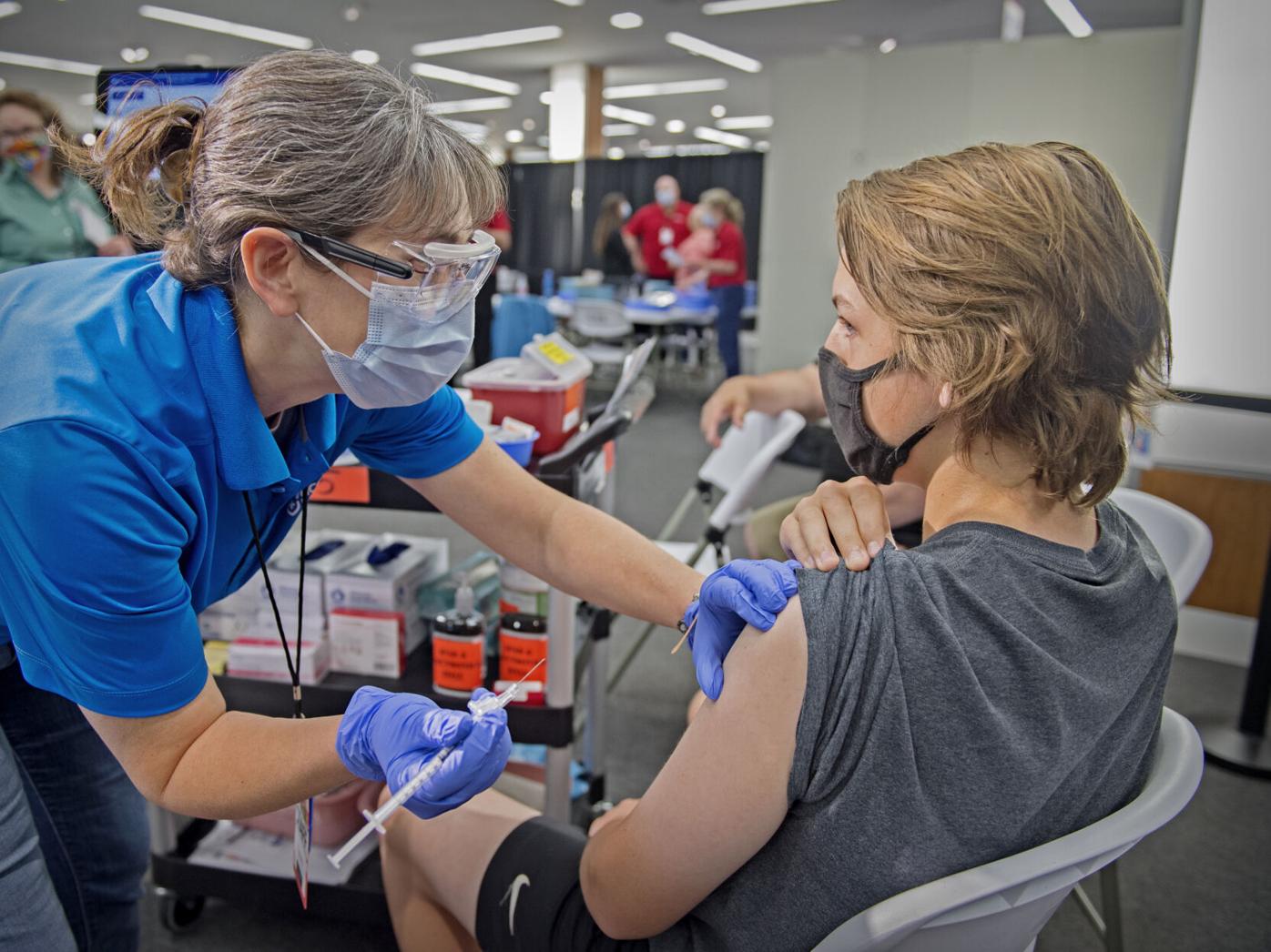 Tamara Trout, left, prepares to give the second Pfizer-BioNTech vaccine to Sawyer Weyman,15, of Eden Township, at the mass vaccination center inside the former Bon Ton store at Park City Friday, June 25, 2021. 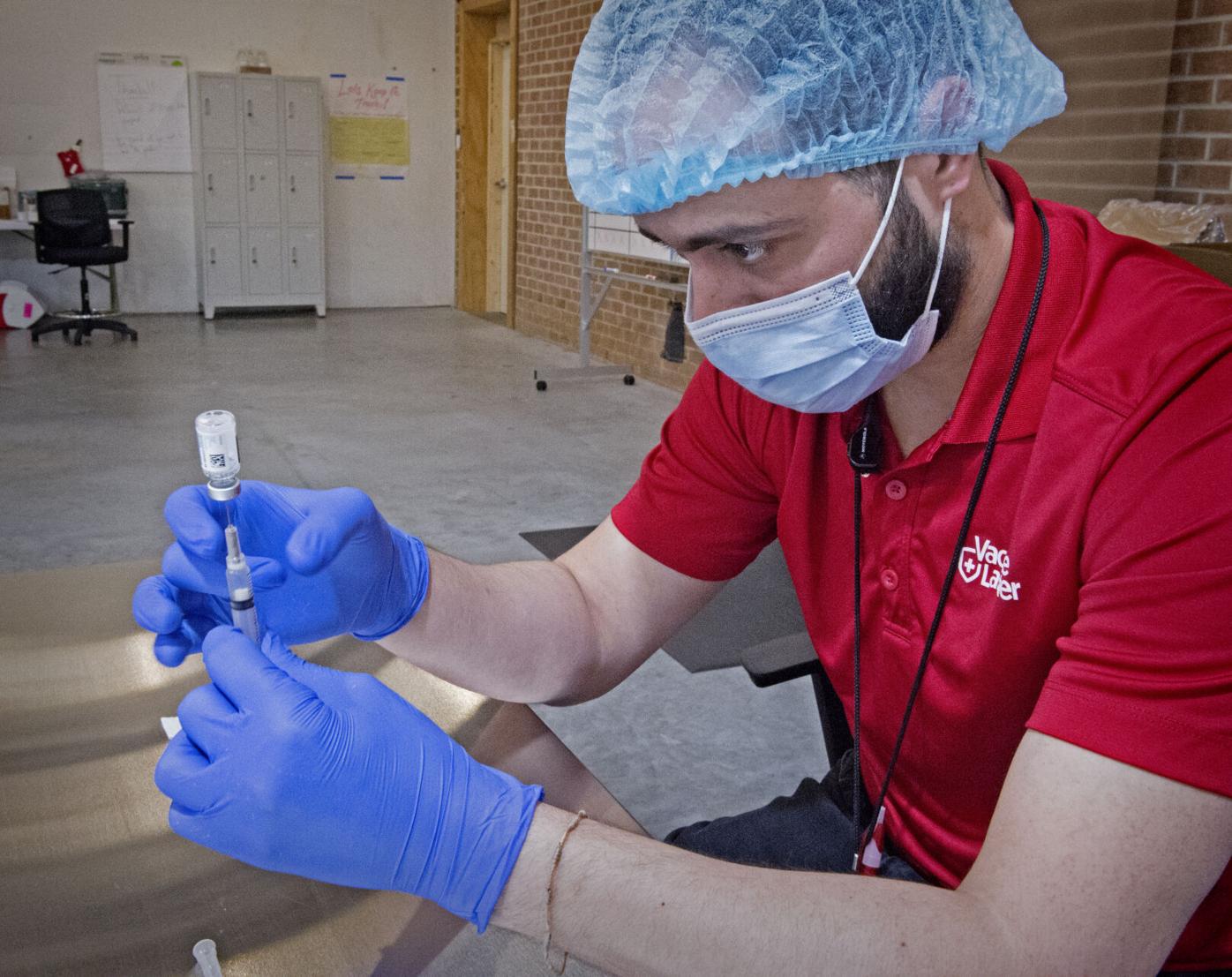 Roland Massasd, a pharmacist at the mass vaccination center inside the former Bon Ton store at Park City, draws the Johnson & Johnson/Janssen vaccine into a syringe at the center Friday, June 25, 2021. 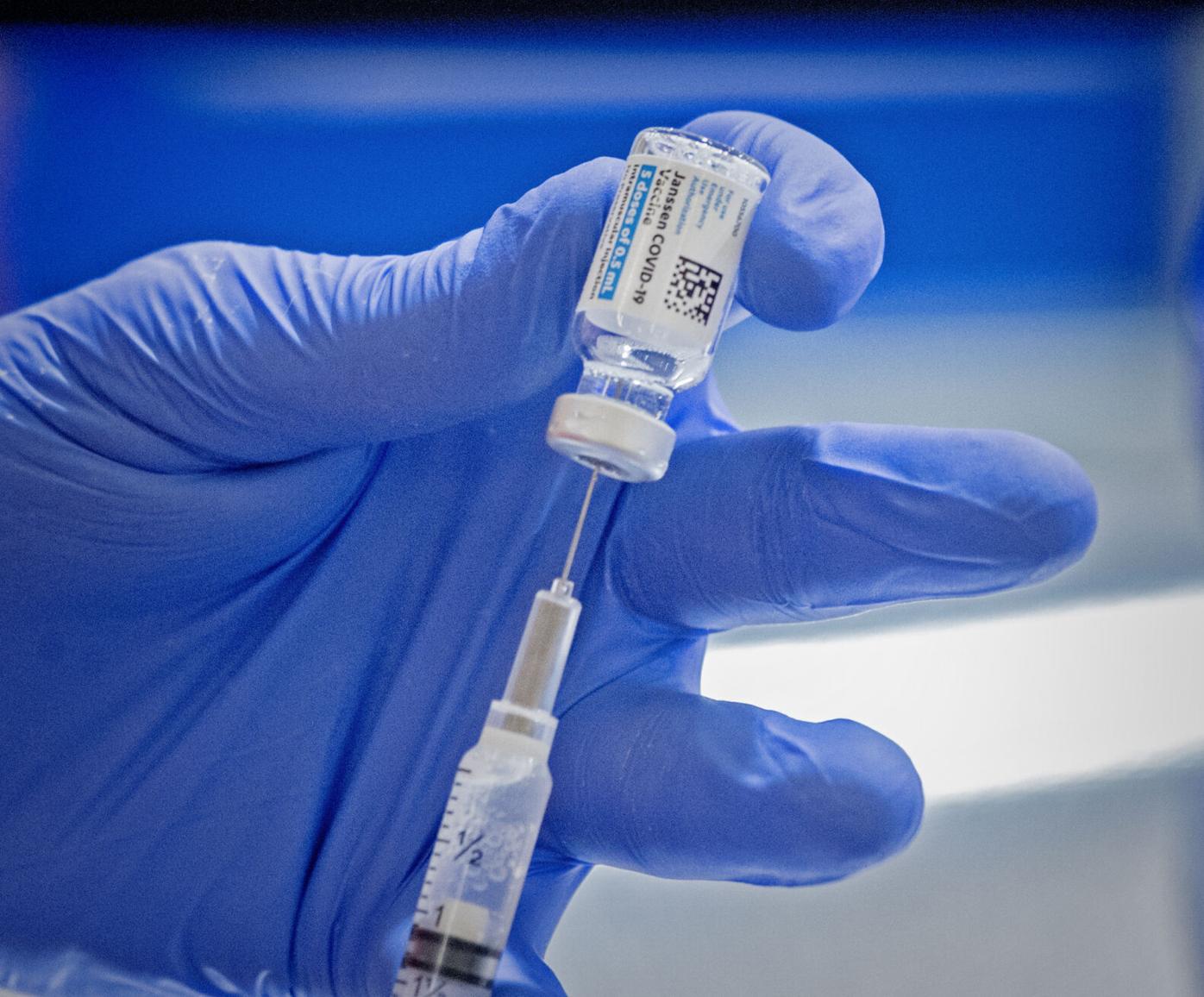 Tamara Trout, left, prepares to give the second Pfizer-BioNTech vaccine to Sawyer Weyman,15, of Eden Township, at the mass vaccination center inside the former Bon Ton store at Park City Friday, June 25, 2021.

Roland Massasd, a pharmacist at the mass vaccination center inside the former Bon Ton store at Park City, draws the Johnson & Johnson/Janssen vaccine into a syringe at the center Friday, June 25, 2021.

Employees at the Lancaster County mass vaccination site will inoculate their last patient today with a COVID-19 vaccine before permanently closing the doors on an operation that has vaccinated more than 115,000 people across the region.

The move signals a major shift in the local vaccination campaign from one heavily dependent on a single, centralized site toward popup clinics, designed to target difficult-to-reach communities.

“We’re not done yet,” said Dr. Michael Ripchinski, site director and chief clinical officer with Penn Medicine Lancaster General Health. “This is just the end of this current phase of vaccinations.”

The Lancaster County Community Vaccination Center opened March 10 in the former Bon-Ton store at Park City Center with the capacity of vaccinating up to 6,000 people a day.

That goal was never realized.

The mass vaccination site peaked at 5,831 doses on April 20.

While the site averaged 2,400 doses a day, April was the busiest month. Vaccinators gave shots to more than 5,000 people on six days between April 9 and April 21, according to data provided by Vaccinate Lancaster Coalition, the public-private partnership behind the mass vaccination site.

As of June 23, a week before the closure, the site had administered 235,881 doses of vaccines, according to data provided by Brett Marcy, a spokesman for Vaccinate Lancaster Coalition.

Roughly a third of those vaccinated at the site are not Lancaster County residents.

While the Lancaster center isn’t the only mass vaccination site in the region — there are community sites in Adams, Berks, Dauphin, Lebanon and York counties — it is the largest by far. The Adams and Franklin sites are closing next month.

The site in Berks, for example, opened on May 3 with the capacity of vaccinating 1,600 people daily, but peaked at just 274 doses, said Lindsey Miller, chief operating officer for Berks Community Health Center, which is operating the site. As of June 23, the Berks site had administered about 4,200 doses. The site is set to close July 31.

The vaccination center in Lancaster hired more than 1,000 employees to work at the site.

Tamara Trout — a causality of the COVID-19 recession — is among them.

Shortly after finding herself unemployed, her job search yielded two offers, one at the center. The decision she had to make kept her up at night, Trout said. Ultimately, she turned down a permanent opportunity as a medical assistant to take the job at the mass vaccination site, wanting to be part of the return to normalcy effort.

“This was absolutely the way to do that and I wanted to be a part of that,” said Trout, a site vaccinator.

Over the past three months — Trout said — she’s witnessed a lot of happy tears.

The site has been vaccinating about 500 people a day, 20% of whom are walk-ins.

Riley and Sawyer Weyman were among those receiving their second dose Friday.

In April, when the virus was circulating among her friends at Solanco High School, Riley Weyman got mildly sick with COVID-19.

“I didn’t want to go through it again,” said the 17-year-old, of Eden Township.

The siblings’ parents — both teachers — are vaccinated.

“It was important for us to model for them,” said Irene Weyman.

Aware of the pending closure, Irene Weyman said she had rushed to get her children vaccinated after the Centers for Disease Control and Prevention approved the Pfizer vaccine for 12 to 15 year olds on May 12.

Everyone who received their first Pfizer dose after June 9 will be referred to a community partner for their second-dose shot. The Pfizer vaccine requires a second dose booster shot three weeks later.

While patients appear to prefer the Pfizer shot over the one made by Johnson & Johnson, overall demand at the site is way down.

Staff were using only about a quarter of the space on Friday.

As of Tuesday, nearly 280,000 residents in Lancaster County were at least partially vaccinated, according to state health department data.

“Being part of this has been very overwhelming, in a good way,” said Roland Masaad, a site pharmacist.

The Community Vaccination Center budget was about $20 million.

But that was based on roughly twice the volume. As with most businesses, employees account for the bulk of the costs.

While the true costs won’t be known for several weeks, Ripchinski estimated the price tag will come in under $10 million. The majority of those expenses, Ripchinski noted, will be reimbursed by the Federal Emergency Management Agency.

An after-action report is expected once the receipts are tallied.

The next wave in the vaccination effort is expected to look very different. That work has already been undertaken by a coalition of 30 members with various ties to vulnerable communities.

The mass vaccination site has supported a “hub and spoke” model, which to date has provided roughly 3,300 doses for difficult-to-reach communities in Lancaster County such as those who are low income, rural and homebound.

Ripchinski, and others, expect the bulk of the vaccination work moving forward to be done in doctor’s offices, pharmacies and popup clinics.

“The best place to talk about whether to get vaccinated is with your trusted provider,” Ripchinski said.

If Lancaster County commissioners, partners in the mass vaccination site, were granted a redo, at least one said he would have deployed more pop-up clinics earlier.

But the Democratic leader — the only of the three to respond to an inquiry by LNP | LancasterOnline — was quick to add identifying the accomplishments is a mixed bag.

“From a herd immunity perspective, vaccine hesitancy was and is an ongoing challenge,” Lehman said in an email. “From an equity outcome perspective, it remains to be seen. I have been and continue to be a big supporter of pop-up clinics to be intentional about boosting equity outcomes for hard to reach populations.”

Over the past three weeks, Pennsylvania providers have increasingly requested fewer doses of…

After more than three months, the Lancaster County Community Vaccination Center is closing. Here are the numbers that show the work done to vaccinate the community as of June 23:

115,450 — The number of individuals vaccinated with either a two-dose vaccine or one-dose Johnson & Johnson/Janssen vaccine.

50.3% — The percentage of men who received their first dose at the site.

49.5% — The percentage of women who received their first dose.

0.2% — The percentage who did not self-identify their gender.

5,831 — The highest number of doses administered in a single day.

Did you get your first dose of the Pfizer BioNTech COVID-19 vaccine at the Lancaster County Vaccination Center and need a second jab?

June was a month of growing optimism as Lancaster County continued through the second year of the coronavirus pandemic.

After more than three months of operation, the Lancaster County Community Vaccination Center administered its final COVID-19 vaccine on Wednes…