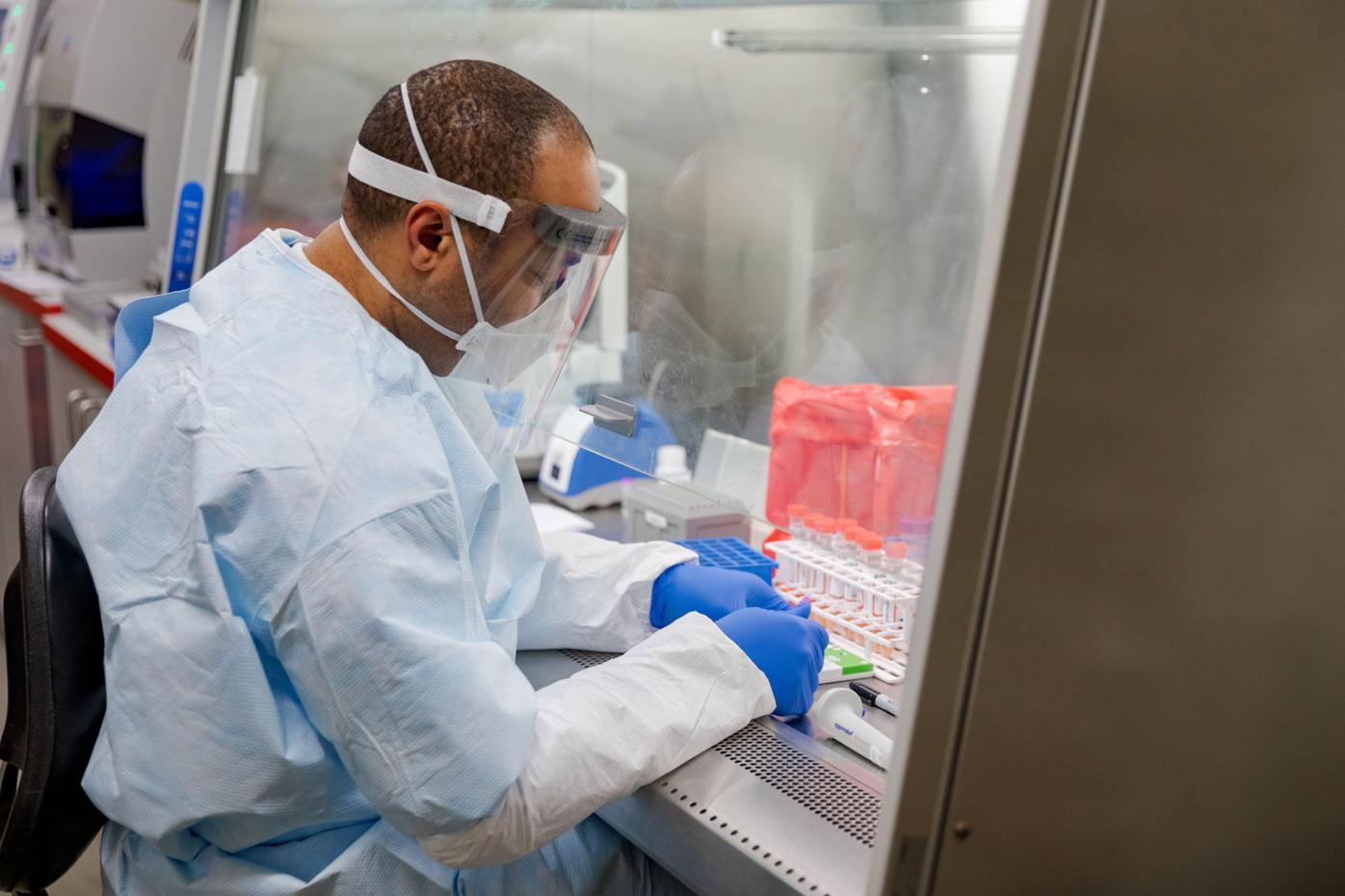 Pennsylvania Commonwealth microbiologist Kerry Pollard performs a manual extraction of the coronavirus inside the extraction lab at the Pennsylvania Department of Health Bureau of Laboratories in this 2020 file photo.

This chart from the Pennsylvania Department of Health's website shows that the average number of patients hospitalized for COVID-19 in Lancaster County has again begun to increase following weeks of decline.

Evidence is growing that the weeks-long decline in new coronavirus cases and hospitalizations in Lancaster County has ended, at least for the time being.

And with restrictions on businesses and public gatherings loosening, the county could find itself at increasing risk of a new spike in cases and illnesses if sizable numbers of people ignore precautions such as masks and social distancing.

Only about a quarter of the county’s adult population has so far been at least partially vaccinated,  according to the state Department of Health, leaving many still vulnerable to the highly contagious coronavirus.

The average daily rate of new COVID-19 cases is essentially unchanged from two weeks ago — at about 123 new cases per day, or twice the level of last spring’s initial peak, an LNP | LancasterOnline analysis of health department data shows.

Until the beginning of March, the rate had been dropping steadily from the December peak of 408 new cases per day.

A similar trend is playing out statewide. Over the past two weeks, the state has averaged 2,579 new cases per day. That’s about the same as early March, and it marks a slight increase from the beginning of this week, when the average was 2,452.

Through February, the rate had been dropping steadily from its December peak of more than 10,000 new cases per day.

The per-capita rate of new cases remains slightly higher in Lancaster County than the state as a whole. As of Friday, the county had had 315 new cases per 100,000 population over 14 days, while the state had had 282.

Hospitalizations here are inching back upward after a plateau that followed a steady decline from December, the state health department data shows.

The number of COVID-19 patients in county hospitals averaged 36 this week, up from 31 last week.

The rolling, 14-day daily average has also begun increasing here this week for the first time since mid-January. It stood at 34 on Friday, up from 32 at the start of the week but still far below the peak of 164 in December.

Statewide, the daily average has been falling but the decline has slowed, and the actual number of patients ticked up a bit this week. On Friday, there were 1,548 COVID-19 patients hospitalized in Pennsylvania, which was the most since March 7.

Death trends from COVID-19 usually trail several weeks behind the trends in new cases and hospitalizations, and the loss of life here has slowed but not stopped, according to data from the county’s coroner, Dr. Stephen Diamantoni.

There were 23 COVID-19 deaths here in the first half of March, which is about half the pace of February. The total for the pandemic is now at 970 since the first death here last March 26.

Statewide, Pennsylvania has been averaging 34 COVID-19 deaths per day over the past two weeks. The rate has continued to decline in March and is about half of what it was at the end of February.

For the pandemic, the statewide number of deaths from COVID-19 stood at 24,741 on Friday.

Here are Lancaster County stories of endurance, one year since COVID

In what seemed like weeks, the COVID-19 pandemic swept from around the globe to our doorstep…

Nearly 100,000 Lancaster County residents have been at least partially vaccinated against COVID-19

Lancaster County is on track to have 100,000 people either partially or fully protected agai…

9 out of 10 households in Plain community hit by COVID-19 in Lancaster County, health expert says. Was it herd immunity?

Late last spring a COVID-19 wave tore through the Plain community when they resumed church services, infecting an untold number of Amish and M…