John Wright, owner of JF Wright Enterprise LLC, prepping to paint a door frame and overhang that was laden with lead-paint on June 21, 2021. 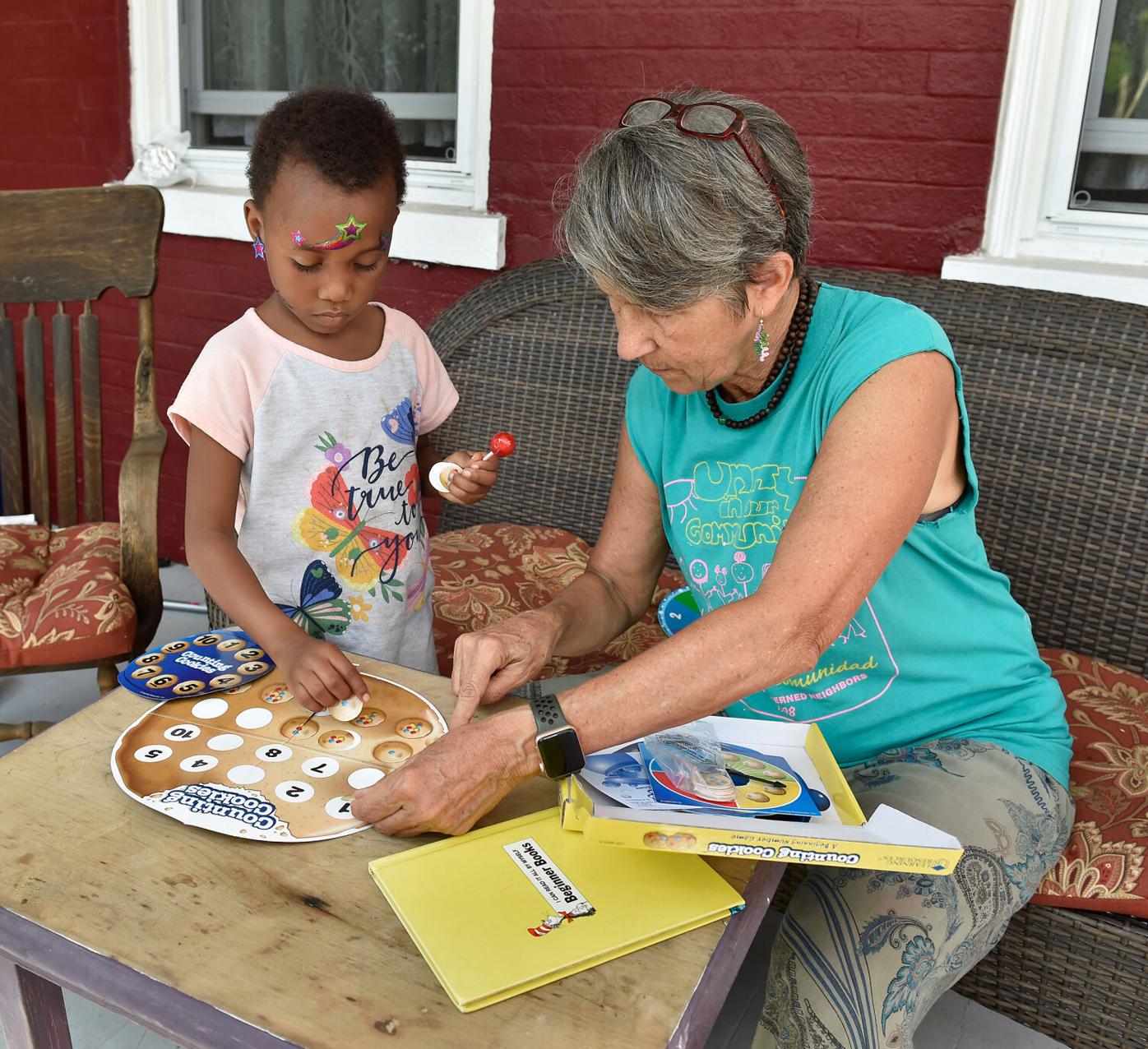 Nyira Mahirwe, 6, works with a numbers game with the help of volunteer and neighbor, Heidi Wert from the porch of a Congolese family as the kids are receiving help from volunteers using their ipads and hooking up Zoom meetings for their classes on Tuesday, September 8, 2020. 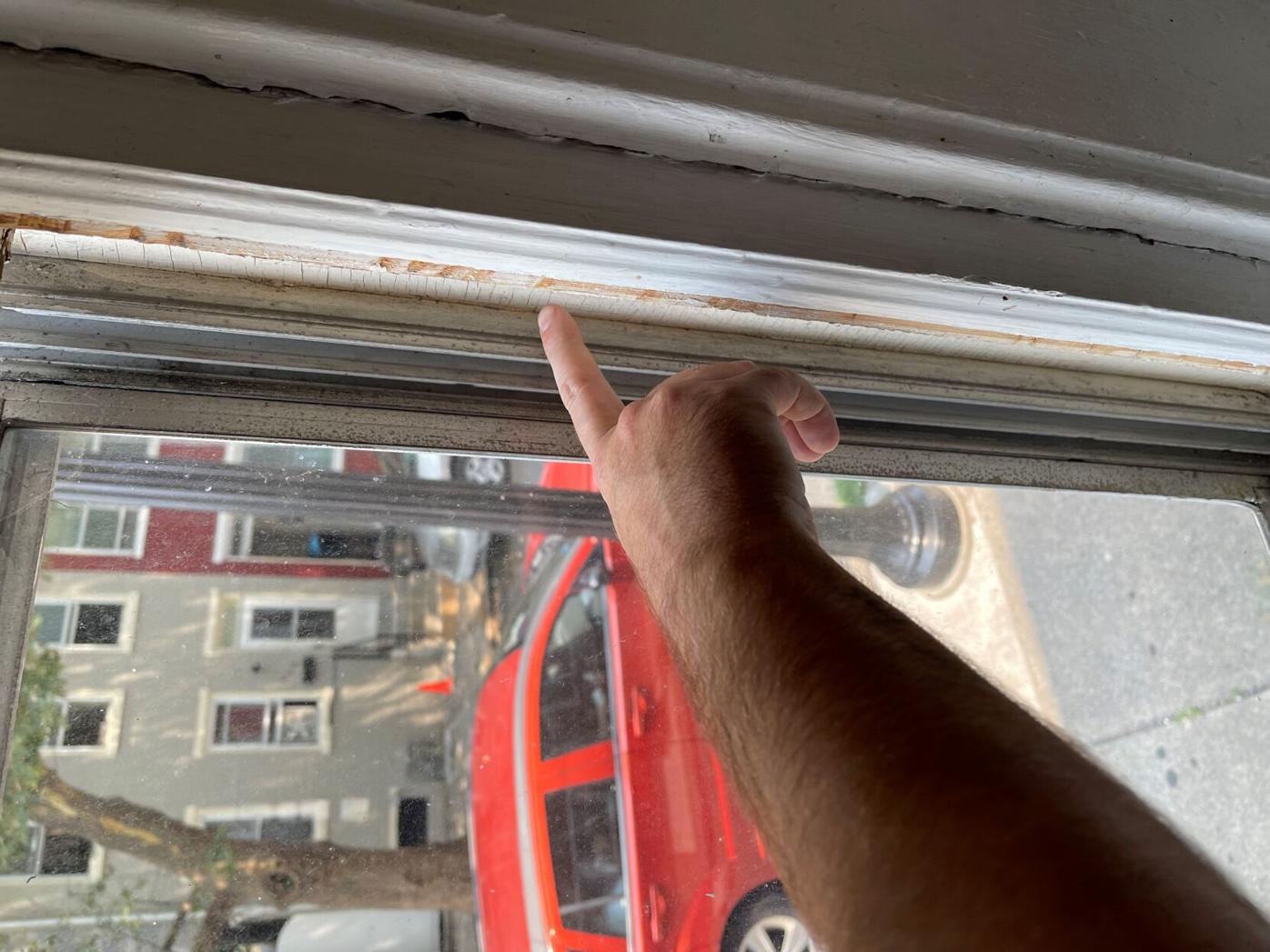 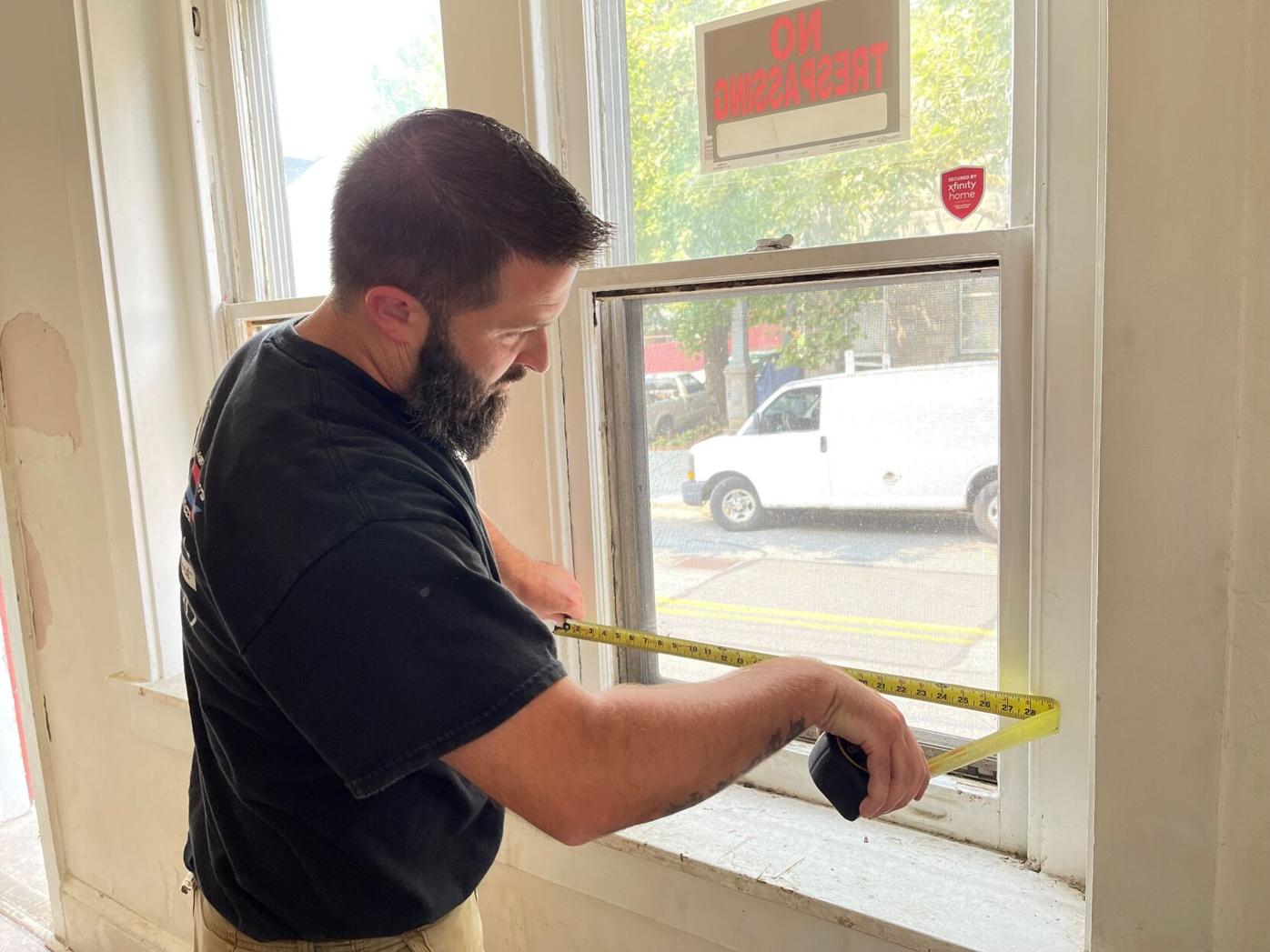 Allen Treadway, owner of Manor Mechanical LLC, measures the windows of a Lancaster home with lead-paint on July 19, 2021.

John Wright, owner of JF Wright Enterprise LLC, prepping to paint a door frame and overhang that was laden with lead-paint on June 21, 2021.

Nyira Mahirwe, 6, works with a numbers game with the help of volunteer and neighbor, Heidi Wert from the porch of a Congolese family as the kids are receiving help from volunteers using their ipads and hooking up Zoom meetings for their classes on Tuesday, September 8, 2020.

Allen Treadway, owner of Manor Mechanical LLC, measures the windows of a Lancaster home with lead-paint on July 19, 2021.

In 2019, when Lancaster received $9.1 million to improve children’s health by removing lead-paint hazards in roughly 700 homes in the city’s poorest neighborhoods, the federal grant was hailed a “game changer.”

Two years later — undeterred by COVID-19 shutdowns — the city has completed work to removed lead, or remediate, 36 homes and has more than two dozen in progress.

“We really feel we’re sort of ahead of the game,” said Darren Parmer, program manager for the city’s lead safety program.

As of Monday, half of the 77 grantees nationally had not completed remediating a single home, according to the U.S. Department of Housing and Urban Development (HUD).

“All the programs are trying to get back up,” said Yolanda Brown, a HUD supervisor. “A few, like in Lancaster, are soaring.”

Of the city’s roughly 100 applications, about half are landlords and half renters.

A tenacious problem — particularly in communities like Lancaster with older housing that predates bans on lead in paint and gasoline — lead poisoning has been called a silent epidemic.

Lead exposure in growing children is extremely dangerous and can result in lifelong health and developmental issues. Prevention is widely considered the best treatment because the damage from lead poisoning is irreversible.

Experts in Lancaster County fear the prolonged COVID-19 shutdowns may have exacerbated the problem, given the number of skipped checkups, considered critical for detecting exposure.

Every year, about 20% of Pennsylvania children are tested and nearly 9,000 are poisoned.

“We’re proud of what we’ve done, but we know how important the work is,” Parmer said.

‘Putting equity into the property’

Lancaster started its lead abatement program 15 years ago. Since then, roughly 400 homes in the city have been remediated for lead.

The HUD grant means Lancaster could nearly double that.

“The city has been engaging in this work for quite some time,” said Craig Walt, bureau chief for Lancaster Lead Safety and Community Development.

Walt added, “I think it indicates the serious need for a program like the one in Lancaster County and it underscores the capacity of our team to carry out such a program.”

The program is targeting 16,000 residents in four U.S. Census tracts south of King Street in homes built before 1940. This area of Lancaster also has children with some of the highest elevated blood lead levels.

The federal government banned lead-based paints in 1978. Lead was added to paint to accelerate drying, resist moisture and increase durability. But lead-based paint was expensive. So, it was primarily used outside.

The average remediation cost is about $13,500, but homeowners could easily spend $40,000 to replace things such as windows, baseboards and trim.

Landlords, however, are required to contribute 10% of project costs and agree to rent the home to individuals earning 80% of the area medium income for three years.

“We’re literally putting equity into the property and make them safe at the same time,” Parmer said. “It’s really a no brainer.”

‘We couldn't have done it on our own’

About 12 years ago the city assisted her with another home project, so Wert called Parmer asking if there was a program that could help replace a pillar on a porch where she teaches refugee children in her neighborhood world music.

Wert qualified for a program that fixed her porch as well as the city’s lead abatement program. The lead abatement project alone cost roughly $23,000 and replaced more than a dozen windows while maintaining the home’s historical character.

"We're retired and the mortgage is paid, but that doesn't mean that I have funds to sink into renovations," said Wert, 66. "We couldn't have done it on our own."

Since 1993, HUD grants like the one the city of Lancaster received have been used to remediate the homes of more than 200,000 low-income families nationally.

When COVID-19 shuttered the economy last year, Parmer’s office closed as well. But while other HUD grantees across the country struggled to reopen, Parmer’s crew started up again last September.

It would be another six months before other HUD grantees rebooted their programs.

“Lancaster is heads and shoulders above,” said Jonnette H. Simmons, the HUD senior technical assistance specialist with whom Parmer and his crew have been working. “If we can’t get folks in the door, you can’t expend federal funds.”

Simmons added, “Some are still not out in the field.”

The HUD grant allowed the city to double the staff who work on lead remediation in Lancaster.

With roughly 85% of the housing in the City of Lancaster — 54% in the county — having been built before 1978 when the federal government banned lead in paint, the need for remediating these older homes is great.

According to the Pennsylvania State Data Center, roughly 50,000 children in Lancaster County are younger than 6 years of age, the cohort especially vulnerable to lead poisoning. That represents nearly 40% of all the children 17 and younger in Lancaster County.

Blood lead level studies have shown Lancaster County children being poisoned at some of the highest rates in the country. This puts county children at a higher risk for lower IQs, an inability to pay attention, poorer academic achievement, personality disorders, even delinquency and crime.

With this much at stake, Penn Medicine Lancaster General Health announced last month a $50 million investment to screen, test and remediate lead in roughly 2,800 Lancaster County homes over the next decade.

And all this is good news because childhood lead poisoning is preventable, said Colleen McCauley, Health Policy Director for Children First, a Philadelphia based organization committed to improving the lives of the region’s children.

McCauley is also co-chair of the Lead-Free Promise Project, a coalition of 40 organizations formed to end lead paint poisoning in Pennsylvania.

"This is not rocket science,” McCauley said. “We know how to protect Lancaster babies from being irreversibly harmed by lead paint and that's to have it removed from their homes.”

McCauley added, "These efforts are exactly what is going to get us closer to eliminating lead paint poisoning in many babies and children, to help children achieve their full potential."

Getting the lead out

The majority of these homes were built before 1940, the majority of which are likely laden with lead-based paint and have among the highest elevated blood lead levels in children.

The program is free for tenants and homeowners. Landlords, though, are required to contribute 10% of the project cost.

• Participants are required to live within one of the four census tracts.

• A child 6 years of age or younger must live or minimally visit the home six hours a week.

Don’t live in the city of Lancaster?

For more information or to apply for the county program through LG Health, visit LeadFreeFamilies.org online or call 717-544-5323.

Lead poisoning occurs after building up in the body, frequently over months or years. Even small amounts can cause serious health problems, particularly in children younger than 6.

Here’s what to look for:

• Loss of appetite or weight loss

If you see these symptoms in your child, contact your health care provider.

The Lead Free Promise Project has a one-stop online resource guide to help the families navigate what can be a complex remediation and treatment process.

Touted as the first-of-its-kind toolkit, the online resource connects health care providers and families of poisoned kids with the services they need.

For more information or to download the resource guide, visit www.paleadfree.org.