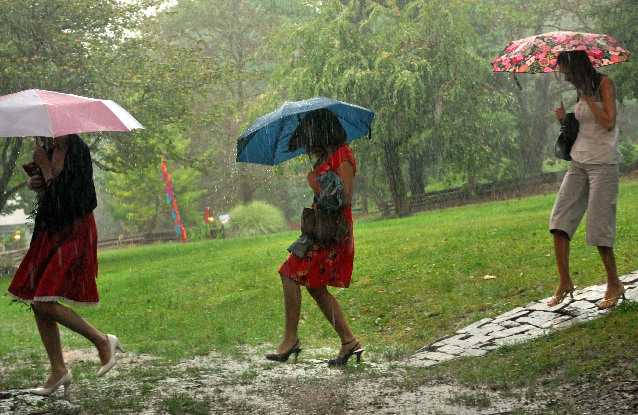 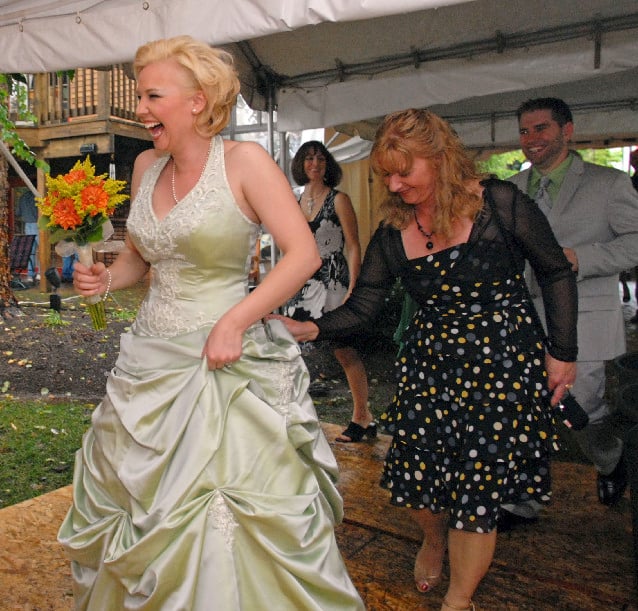 The bride isall smiles as she arrives at the tent for the ceremony. (Jeff Ruppenthal, Sunday News) 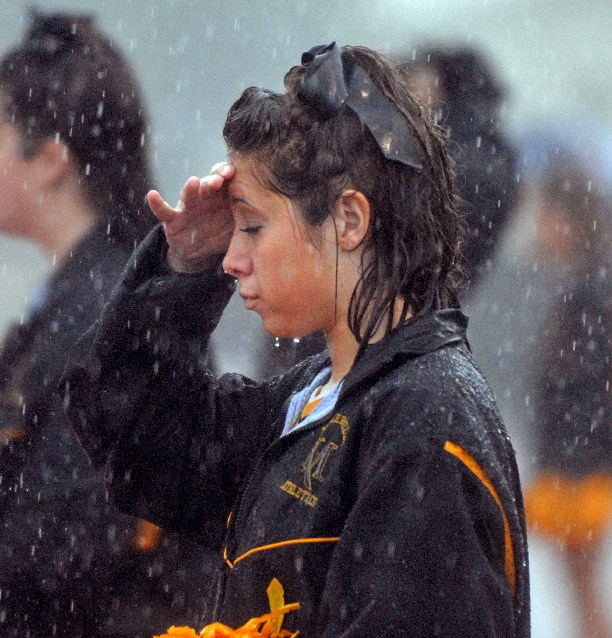 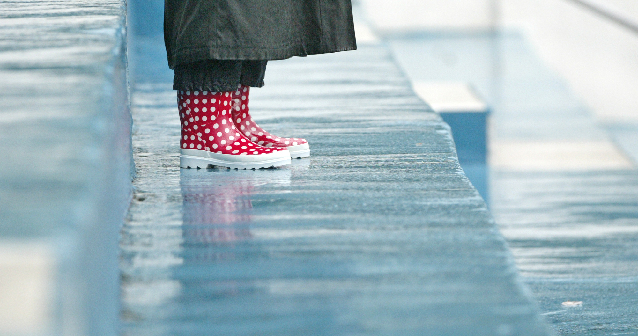 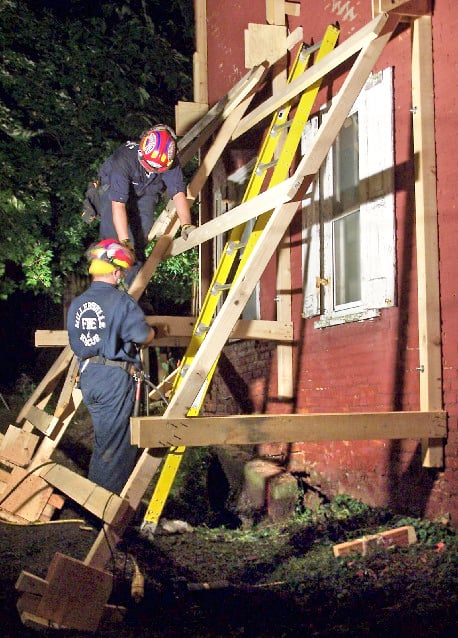 The Collapse Team of Millersville Fire and Rescue build temporarysupport for a Washington Boro home, which partially collapsed whenwater washed out part of its foundation Saturday. (Jeannette Scott, Sunday News) 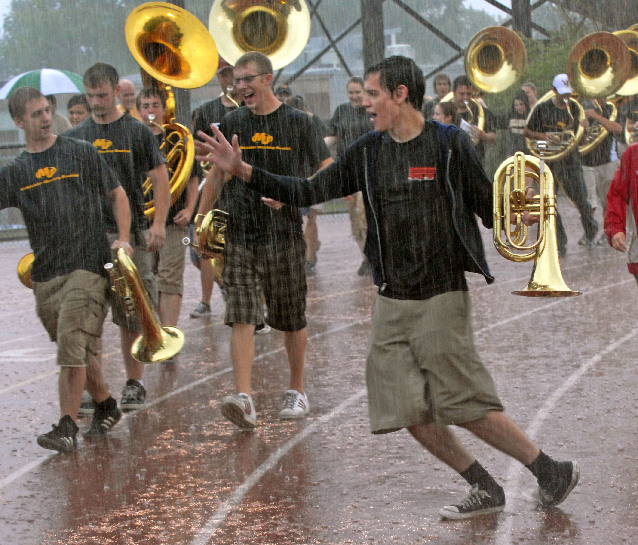 Members of the Millersville University band dance in the rain as they leave the field before Saturday. (Jeff Ruppenthal, Sunday News)

The bride isall smiles as she arrives at the tent for the ceremony. (Jeff Ruppenthal, Sunday News)

The Collapse Team of Millersville Fire and Rescue build temporarysupport for a Washington Boro home, which partially collapsed whenwater washed out part of its foundation Saturday. (Jeannette Scott, Sunday News)

Members of the Millersville University band dance in the rain as they leave the field before Saturday. (Jeff Ruppenthal, Sunday News)

One's wedding is always a day to remember - but even more so when it happens in the midst of a tropical storm.

Lani Todd and Ryan Benner held their nuptials before 150 guests Saturday afternoon under a large, leaky tent on the 11-acre Lancaster Township farm of their friends Glenn and Marlene Usdin.

Though Tropical Storm Hanna didn't stop the Benner-Todd wedding, it did drop up to 3 inches of rain in some parts of the county; caused a house to partially collapse in Manor Township; downed wires and trees; and led several local sporting events to be postponed or canceled.

Randy Gockley, the county's emergency management coordinator, said the only "unusual event" resulting from the storm was an incident in Washington Boro.

Heavy rainwater runoff washed away part of a home's foundation in the 1900 block of Water Street Saturday night.

"When we arrived, we found foundation damage, and the corner of the house dropped," Goe said.

Part of the foundation in a rear corner of the house was washed out, bricks on the outside wall of the home had separated, and a crack continued to the roof, he said.

Firefighters pumped the water out of the basement into a ditch they dug in the alley. Electricity was also shut off as a precaution.

The Millersville Fire Company Collapse Team was called to assist.

The owner, Fred Dinkle, 72, was home at the time, Goe said. Dinkle declined to speak to a reporter Saturday.

A building inspector was called late Saturday night to evaluate the damage.

"But we are advising [Dinkle] not to return to the home," Goe said.

Dinkle planned to stay with relatives, according to Goe.

There also were incidents of residential flooding, "ponding" on roadways, and utility wires down.

Dispatchers also reported that a falling tree took down wires at Millcross and Creek Hill roads in East Lampeter Township around 12:17 p.m. Saturday.

In addition, radio personnel were kept busy with several reports of automatic alarms going off throughout the county Saturday morning.

Wind gusts reached as high as 35 miles per hour in the county, said Josh Newhard, a meteorologist with AccuWeather.com.

Jim Keefer of the National Weather Service's cooperative station in New Holland said rainfall there totaled 2.1 inches at 7 p.m., with a light rain still coming down.

Newhard said southern Lancaster County got hit hardest. As of late Saturday afternoon, rainfall measured 1.35 inches in Lancaster, 1.48 inches in Columbia and 3 inches in Quarryville, he reported. Ephrata recorded just over an inch.

There were no reports of stream or creek flooding, Gockley said, though the southern end could still see some flooding.

According to AccuWeather, a flood watch remains in effect through this afternoon in Lancaster, Dauphin, Lebanon, York and Schuylkill counties.

Some Lancaster County residents also found themselves without electricity because of Hanna. As of 3:30 p.m. Saturday, there were 1,608 customers suffering outages in Lancaster County, according to PPL Electric Utilities' Web site; 1,280 of them were in Lancaster Township.

According to the Associated Press, Hanna also left 15,000 PECO customers without service in southeastern Pennsylvania, and may have caused a tornado that hit Dieruff High School in Allentown.

"We have a tent with water leaking through it," Glenn Usdin said Saturday afternoon, a few hours before the Benner-Todd wedding. As he was speaking, the bride and groom were at Kmart purchasing umbrellas, he said.

"There's water everywhere," Usdin said. "My kids are putting buckets under the leaks.

"It's a real adventure."

Back from her umbrella-buying trip, Todd said the horrible weather was making her wedding day "a lot more difficult," but she was enjoying it nonetheless.

Also, the game between the Lancaster Barnstormers and the Southern Maryland Blue Crabs at Clipper Magazine Stadium was postponed and is being made up as part of a doubleheader beginning today at 1:35 p.m.

In New York City, the Philadelphia Phillies game against the New York Mets was rescheduled for today as part of a day-night doubleheader, and the U.S. Open women's final was postponed until today because of rain - the first time since 1974 that the women's championship match was not played on a Saturday.

AccuWeather's Newhard said the areas in Pennsylvania hit by heavy rainfall were the Lower Susquehanna Valley, the Lehigh Valley, the Poconos and the southeastern part of the state.

The Lancaster County forecast for today calls for temperatures in the mid-80s, with sunny skies and less humidity - a "complete turnaround" from Saturday, Newhard said.

Ironically, Lani Todd said, one of the reasons she chose Sept. 6 for her wedding, after doing some research, is because it's a day that historically experiences little rain.

"This is certainly not what I envisioned," she said.