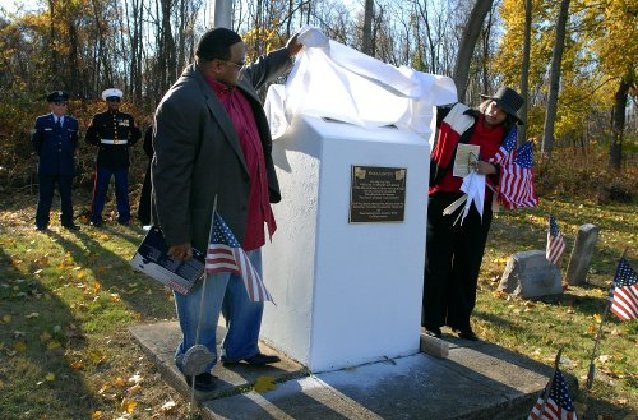 The new plaque is unveiled by Derrick Burch, left, and Darlene Colon at the Stevens-Greenland Cemetery Sunday. (Richard Hertzler/ Staff) 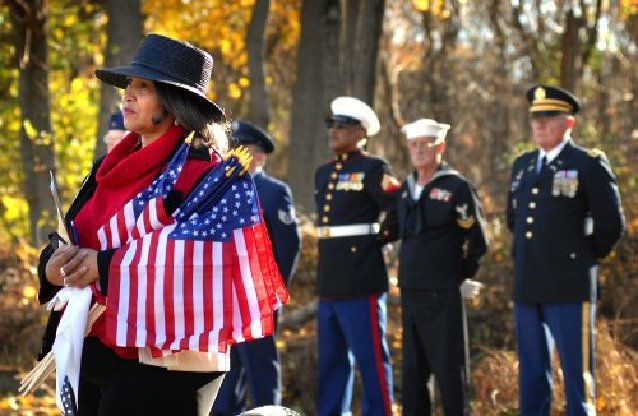 Darlene Colon,who is a reenactor appearing as Lydia Hamilton Smith, pauses for a moment during the rededication ceremony at Stevens-Greenland Cemetery Sunday. (Richard Hertzler/ Staff) 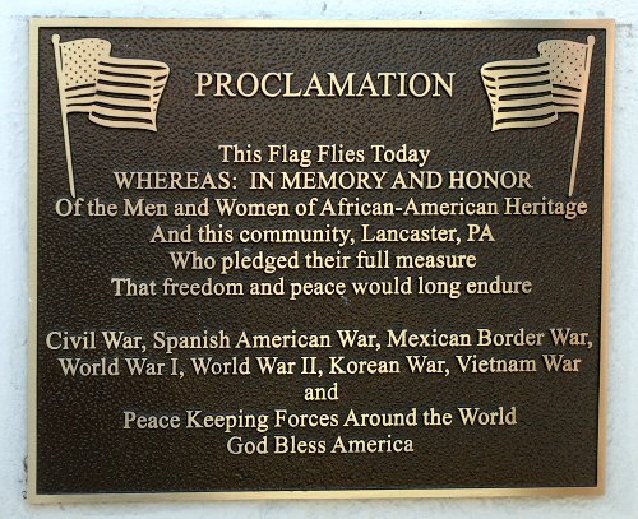 This plaque was put up at Stevens-Greenland Cemetery on Sunday to honor black war veterans. (Richard Hertzler/ Staff)

The new plaque is unveiled by Derrick Burch, left, and Darlene Colon at the Stevens-Greenland Cemetery Sunday. (Richard Hertzler/ Staff)

Darlene Colon,who is a reenactor appearing as Lydia Hamilton Smith, pauses for a moment during the rededication ceremony at Stevens-Greenland Cemetery Sunday. (Richard Hertzler/ Staff)

This plaque was put up at Stevens-Greenland Cemetery on Sunday to honor black war veterans. (Richard Hertzler/ Staff)

Conestoga native Abraham J. Quamony left more than seven children behind when he died in 1912.

Quamony, a Civil War veteran who served with the United States Colored Troops, left a legacy of African-American pride that was felt Sunday by three descendants and several dozen other people who gathered to pay tribute to black soldiers who fought in their country's service.

"Why did we fight so hard for a country that didn't even want us?" A. Lee Brinson, a historian and Civil War re-enactor portraying USCT Pvt. Jonathan Sweeney, asked Sunday.

"Simple enough. We live here, too," he said. "Our women live here. Our children live here. We have a stake in this country."

Sweeney, who died in 1915, is buried at Shreiner-Concord by the grave of U.S. Congressman Thaddeus Stevens, a strong advocate of African-American rights and an active link of the Underground Railroad.

It's important not to abandon these cemeteries, Brinson said.

"It's a historical piece of the community," he said. "What we as black folks tend to forget is that a lot of times when we're taught history in school, it's his story, not ours.

"Well, this is our story. There's a reason for black people to lift their heads and be proud. ... We should teach our kids about this, or people will forget."

"It means a lot," said Brown, who also traces his family back to USCT veteran Thaddeus Henry, buried with Quamony at Stevens-Greenland.

Colon, who orchestrated Sunday's event, said history must be stressed to students at an early age.

"The youth of today have no clue, especially with regards to the veterans who fought and why they fought," Colon said.

"Kids take these things for granted. We want them to care, to remember their families and tell their stories," she said. "Each of these flags, these veterans, they all have a story."

It was a crisp and cool but comfortable autumn day, with flags snapping smartly in the wind as fallen leaves scattered over the graves.

The ceremonies included a brief history of the sites. At Stevens-Greenland, Red Rose Honor Guard raised an American flag and played taps after Colon read the names of the Civil War veterans buried there and dedicated a plaque to their memory.

Millersville University professor Leroy Hopkins said that, before Stevens-Greenland opened for black burials in 1906, most African Americans who died in Lancaster were interred at Bethel AME Church, at Andrew and Strawberry streets.

Stevens-Greenland, a 4-acre plot on Duke Street, is the final resting spot for numerous black veterans as well as Hopkins' own grandparents.

"Various families in Lancaster can trace their ancestry to this burial ground," Hopkins said. "This is hallowed ground. ... Our history is buried here."

Many of the graves are unmarked, however, and local historian Randy Harris hopes volunteers will come forward to help research and identify the remains.

Support for the events was provided in part by the state Office of Tourism's Grand Review of U.S. Colored Troops, in preparation for the upcoming 150th anniversary of the Civil War in 2011.