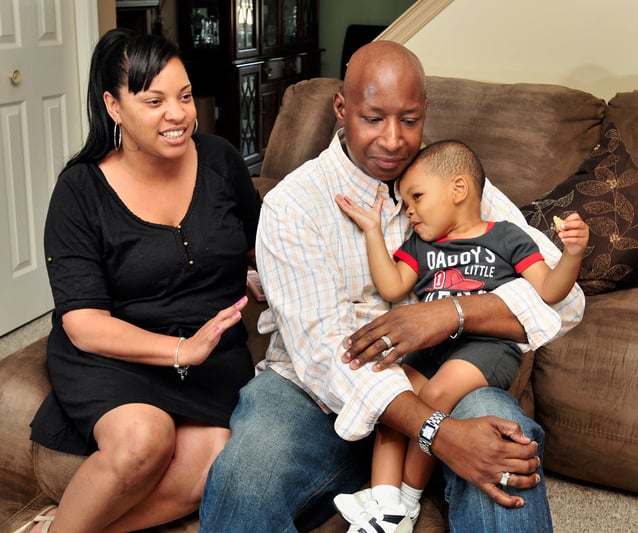 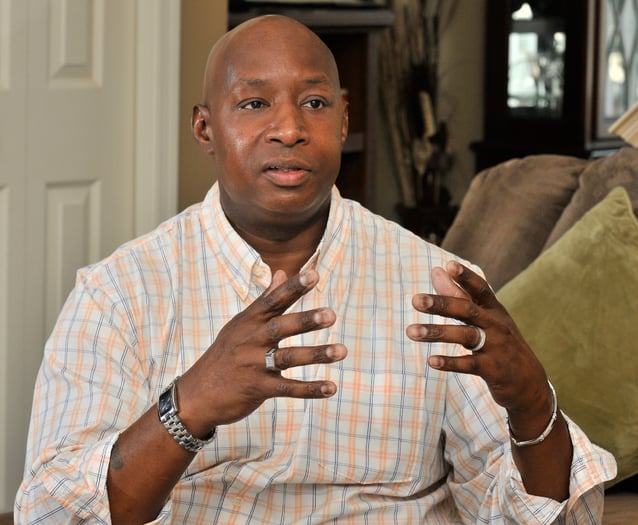 Darryl Gibbs lost his 8-month-old daughter, Cynthia, to shaken baby syndrome in 2000. The Ephrata man now makes it his mission to educate caregivers and parents about the syndrome. (Suzette Wenger / Staff photos) 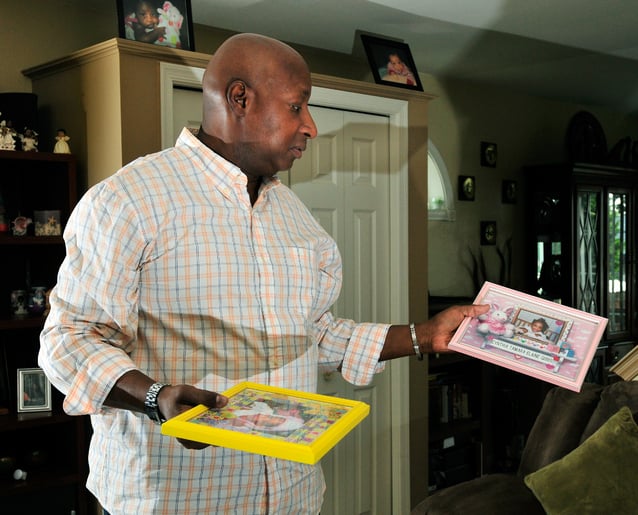 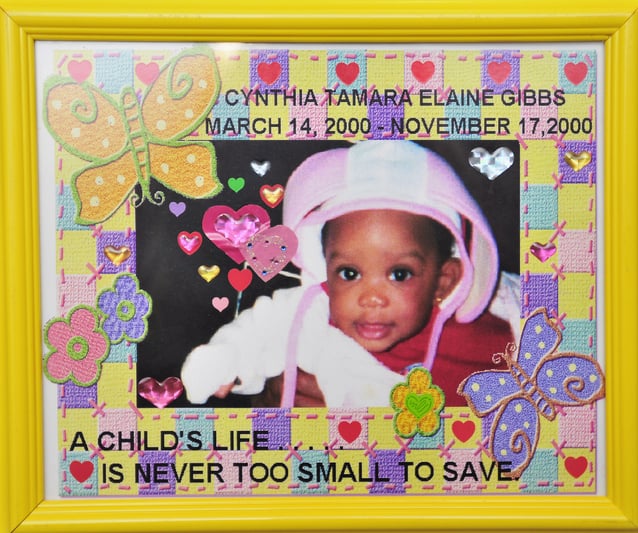 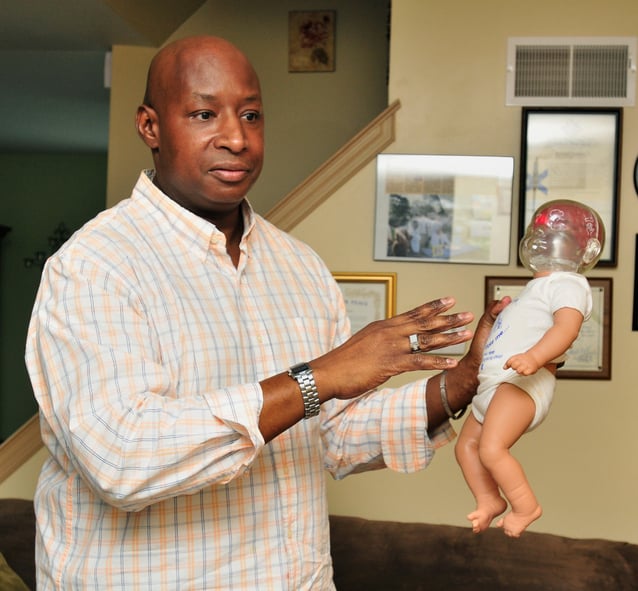 Darryl Gibbs lost his 8-month-old daughter, Cynthia, to shaken baby syndrome in 2000. The Ephrata man now makes it his mission to educate caregivers and parents about the syndrome. (Suzette Wenger / Staff photos)

A state-certified child-care provider lived around the corner from their home in Yonkers, N.Y. She also happened to be Mrs. Gibbs' best friend.

"She had no criminal history," Gibbs says. "She went to church every Sunday. She was on the PTA with my wife. She had five children of her own...

"Anybody would have left their child with her."

On the morning of Nov. 17, 2000, the Gibbses left 8-month-old Cynthia at Little Beginnings Daycare, just as they had every weekday for the previous two months.

But by the end of the day, Cynthia, the happy, brown-eyed baby named for her late grandmother, was dead.

Darryl Gibbs had never heard of shaken baby syndrome before that day. But his tiny daughter's death unraveled and ultimately redefined him, sparking a crusade that became his life's work.

Gibbs, a nationally known activist who recently moved to a quiet Ephrata neighborhood, marks this Father's Day with a reinvigorated mission: to protect babies in Pennsylvania, just as he did in New York.

Gibbs, 48, has told the story of his daughter's death hundreds, maybe thousands, of times, to everyone from sleep-deprived new parents to readers of national magazines, including People, which called him a "Hero Among Us."

Inconsolable crying unhinges some caregivers, Gibbs says, and they are unable to cope. Babies are incredibly fragile, and just a few seconds of frustration-fueled shaking can cause death or permanent injury, including brain damage and blindness.

"People don't want to believe that people would do this to a baby," he says.

Lancaster County is fertile ground for Gibbs' message. At least six county babies and toddlers have died - and others have been seriously injured - from shaking or other physical abuse since 2007, newspaper records show.

"Every one is one too many, obviously," District Attorney Craig Stedman says. "Preventing one child death is monumental."

Shaken baby syndrome stole many things from Gibbs, even a once-happy marriage to his college sweetheart. His advocacy led him to a new family, which now includes a toddler son.

Twelve years - and an unexpected new challenge - haven't dimmed his determination to remember Cynthia and prevent other families from suffering the same pain.

"It's the worst feeling you could feel, to have your child ripped out of your life," Gibbs says. "We sent her to day care. We didn't send her to war."

The day that changed his life

Barbara Gibbs returned to work at an investment firm in September 2000. Over the next several weeks, the Gibbses and their three daughters settled into a comfortable daily routine.

On Nov. 17, baby Cynthia - named for Gibbs' beloved mother, who had died in her sleep two years earlier - woke up happy and ready to be held, as usual. Gibbs, then a corrections officer, dressed her in a pink-and-lavender outfit.

But that evening, Mrs. Gibbs arrived at her friend's home day care to find Cynthia lying on the couch. She picked up the baby, who slumped in her mother's arms.

Certain that something was terribly wrong, Mrs. Gibbs raced Cynthia to a nearby emergency room.

"They tried everything medically possible," Gibbs says. "Nothing more could be done."

Cynthia's body showed no obvious signs of trauma. She looked no less perfect than she had first thing that morning, Gibbs says.

The caregiver, Barbara Barron, first told police that Cynthia had rolled off the couch, then claimed the baby had fallen down the stairs, Gibbs says.

At her trial, he says, Barron claimed Cynthia arrived that morning already gravely injured, an attempt to pin blame on Gibbs, a solidly built 6-foot-4.

The jury didn't buy Barron's story. She was convicted of manslaughter and sentenced to five to 15 years in prison.

When Barron left the courtroom in handcuffs, Gibbs wondered, What now?

"There were many nights when I asked God to please not wake me up," he says. "Wherever Cynthia was going, I had to be there. I was her father.

"But God woke me up each morning."

After Cynthia's death, Gibbs struggled with post-traumatic stress disorder and depression. Crying babies filled his nightmares. If he saw someone pushing a stroller in his direction, he had to cross the street.

Gibbs believes that Cynthia would be alive if someone had educated him, because he would have then made sure his child-care provider knew the dangers of shaking a baby.

Gibbs began speaking to parents, nurses, child-care providers, social-service agencies and even prisoners. He also supports and counsels parents who have lost a baby.

"That's your front line of prevention," he says. "Mothers and fathers are a captive audience. They're in the hospital. They're not going anywhere."

In 2006, Cynthia's Law made it a felony in New York to injure a child under age 5 by shaking, slamming or throwing. (Prosecutors previously had to prove intent to injure.) Perpetrators face up to seven years in prison.

"If you had shaken a baby (who survived) before Cynthia's Law, it was like getting a speeding ticket," Gibbs says. "It was a slap on the wrist."

Increased education and tougher laws have led to a sharp drop in shaken baby cases in New York, he says.

But even as Gibbs' advocacy geared up, Cynthia's death took its toll on his marriage, leading to a 2003 divorce. His ex-wife now lives in North Carolina with their daughters, Vanessa, 21, and Danielle, 18.

Barron, the former best friend, served a decade in prison. Gibbs says she has never explained exactly what happened to Cynthia, or why.

Gibbs met social worker Michelle Caballero at one of his shaken baby syndrome trainings. They became friends and eventually went on a date.

The couple, who recently married, moved to Ephrata to help care for Caballero-Gibbs' elderly father, Jesus M. Caballero, who died in April 2012.

Encountering Barron on a New York street further motivated them to move.

Gibbs hopes to duplicate his New York successes in Pennsylvania. He is also working for stronger federal laws.

The only existing shaken baby law in Pennsylvania requires education for new parents, he says.

As a family spokesman for the Pennsylvania Shaken Baby Syndrome Prevention and Awareness Program at Penn State Hershey Medical Center, Gibbs appears in an educational video shown in hospitals statewide.

"Every parent of every baby born in Pennsylvania should be hearing Darryl's story," says Kelly Cappos, one of the program's nurse coordinators. "His story is so powerful and moving."

"The girls are often struggling as moms, and they do find themselves in frustrating situations," she says. "This (shows) them where you don't want to go with those emotions."

But Gibbs now faces another struggle of his own.

Last September, he saw a doctor for back pain. He was shocked to learn that he has multiple myeloma, or cancer of the plasma cells.

Gibbs had a stem cell transplant in April and takes chemotherapy every Friday. He has lost weight and sometimes gets so tired that he has to crawl up the stairs in his home.

But Gibbs insists that he feels fine and he's not giving up - on anything.

"He's a fighter," Caballero-Gibbs says. "He's not going to let this take him down."

After he lost Cynthia, Gibbs didn't think he'd ever hold another baby. He now has many powerful reasons to keep fighting, including a 21-month-old son, born just two hours shy of his own birthday.

"He's God's way of healing me a little more," Gibbs says. "He's the child I needed."

The little boy's first name is Darryl, like his father. His middle name is Justice.