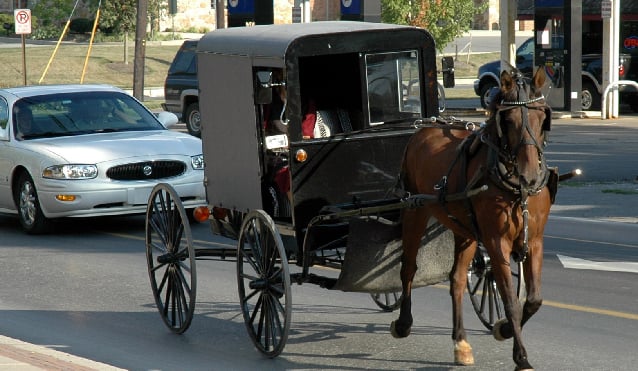 A horse and buggy passes by a gas station in Intercourse in this file photo. (Lancaster Newspapers)

A horse and buggy passes by a gas station in Intercourse in this file photo. (Lancaster Newspapers)

That's what some drivers might think they should do as they pay $4.10 or more for a gallon of gas.

But maybe they should think again.

It's true that a new car costs nearly three times as much as a typical Lancaster County Old Order Amish horse-and-buggy rig.

And it's true that it costs about twice as much to keep a car on the road each year as it does to run a horse and buggy.

But - and this is a huge but - the average car travels about 10 times farther each year than the average buggy. So it costs a horse and buggy about five times as much as a car to go a mile down the road.

It's the horse, of course. It's the care and feeding of the horse.

"You turn that car key off, it's all over," observes Christian Z. Stoltzfus, a horse auctioneer in Honey Brook, Chester County. "But you have to feed that horse 365 days a year."

To determine who is getting the better deal on county roads busy with both buggies and cars, the New Era conducted an informal survey of costs associated with two radically different modes of transportation.

That's about what you would have to remove from your wallet to purchase a Saturn Aura XR with a sun roof and all the interior trimmings, according to Connie Weidman, a sales rep for Saturn of Lancaster.

Hardly a negligible amount, Weidman acknowledges, but worth it. She wouldn't think of trading her Saturn for less expensive horse-drawn transportation.

"I couldn't do without the air conditioning," she says, "or the recirculator for the manure smell as I drive through the country."

These are all local estimates. Of course, there are variations, all without motors.

Country Lane Coach Shop at Paradise sells a new fiberglass buggy for $6,000 to $8,000, depending on various amenities.

Five oil changes a year cost about $110, according to Christine Bear, office manager at Roberts Automotive on Columbia Pike.

But veterinary expenses for a healthy horse run at least $250 a year.

Dr. Willard Stoltzfus, of Black Horse Animal Hospital, Kinzers, breaks that down: $100 for vaccines, $75 for four dewormings, $75 for a tooth floating.

When it comes to replacement parts, costs can be radically different. Let's just compare tires and horseshoes.

You can figure on buying a new set of tires every three or four years, according to Bear. Cost per year: $100.

But Petersheim says five or six sets of new horseshoes each year will set you back about $300.

Now we come to fuel.

The cost of a gallon of regular gas this week is about $4.11. The EPA says the Saturn Aura gets an average of 20 miles per gallon. The average driver travels 15,000 miles a year. So the annual fuel cost for the car is $3,083.

The annual fuel cost for a horse is a bit harder to figure. The New Era has obtained three wildly varied estimates for a day's feeding: $1.25, $4 and $6.

Petersheim, the middle estimator, observes that horse feed "almost doubled in the last two years. That price went up because gas went up. Hay, feed, everything - it costs more to truck this stuff around."

Now let's add everything (recognizing that we've ignored the costs of stable cleaning, car washing and other small stuff).

(The New Era did not attempt to add up all possible costs associated with cars and buggies. The costs of insurance, licensing, annual auto tune-ups and regular buggy wheel maintenance, for example, are not reflected in these comparisons.)

So let's divide the sticker prices by 10 to get an annual cost figure. Call it depreciation, if you want. That would be $2,880 a year for the car; $1,050 for the buggy and whatever's left in the horse.

Now, add to that the annual maintenance, tire and horseshoe, and fuel costs.

A horse and buggy costs a comparatively trifling $3,060 annually.

But - but - when you figure that the average car travels 15,000 miles a year and the average buggy an estimated 1,500 - only one-tenth as far - you get a very different set of numbers.

It costs about 41 cents a mile to operate the Saturn.

"Buying a horse and buggy is a little cheaper," concludes Sam Stoltzfus, a Gordonville businessman and historian, "but then you have to figure you don't go nearly as far."

"I'm not convinced the Amish are traveling any cheaper than we are," notes Willard Stoltzfus at the Black Horse Animal Hospital.

When asked which is cheaper to drive, car or buggy, the owner of Country Lane Coach Shop makes an observation about business today.

"It would be cheaper to run a buggy, but in today's world time is more valuable to me than the gasoline money," he says. "We're not going to hitch up a horse and go up to Intercourse to get parts when we need them."

So his driver's car is burning gas on the highway while his horse eats hay in the barn.