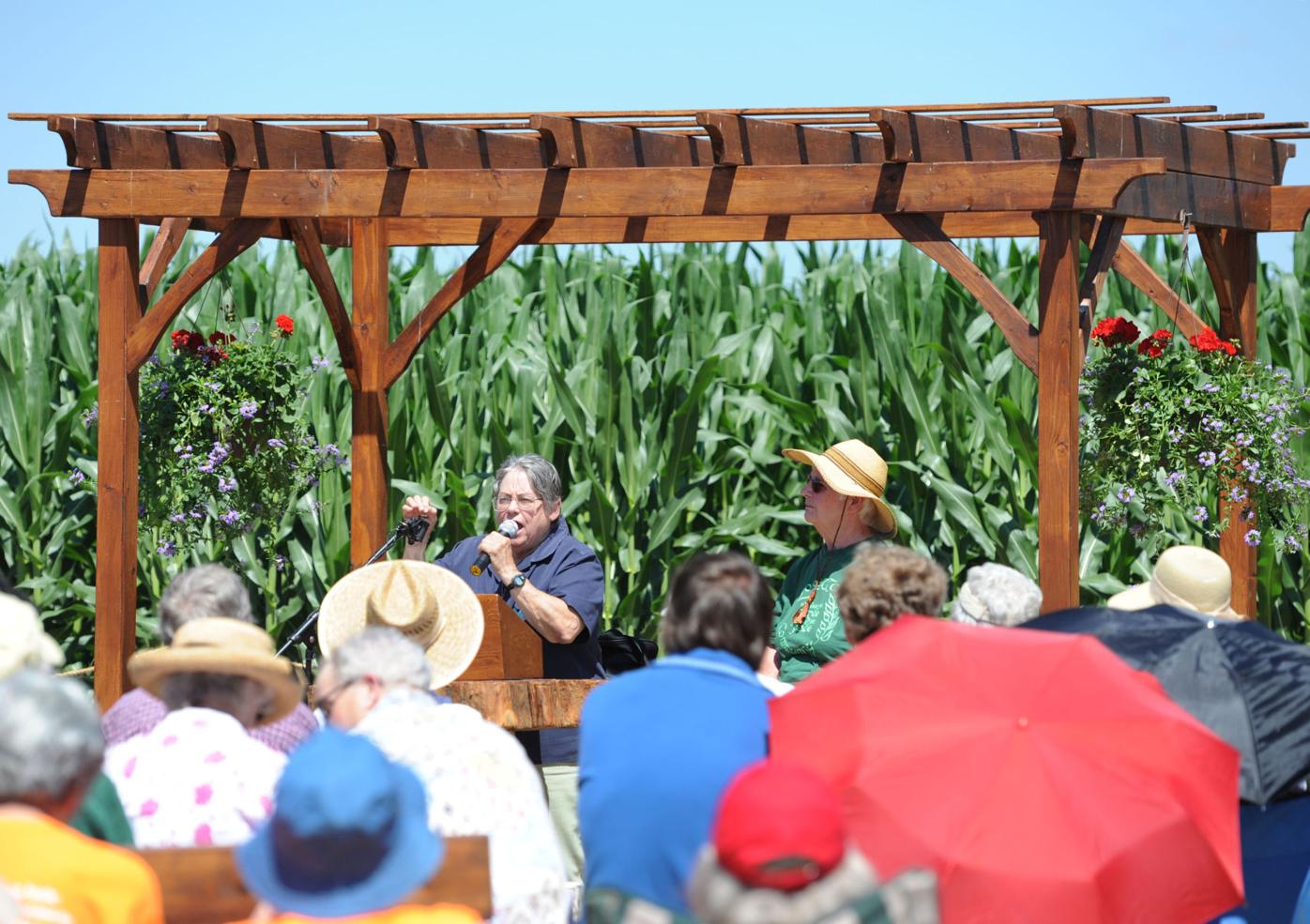 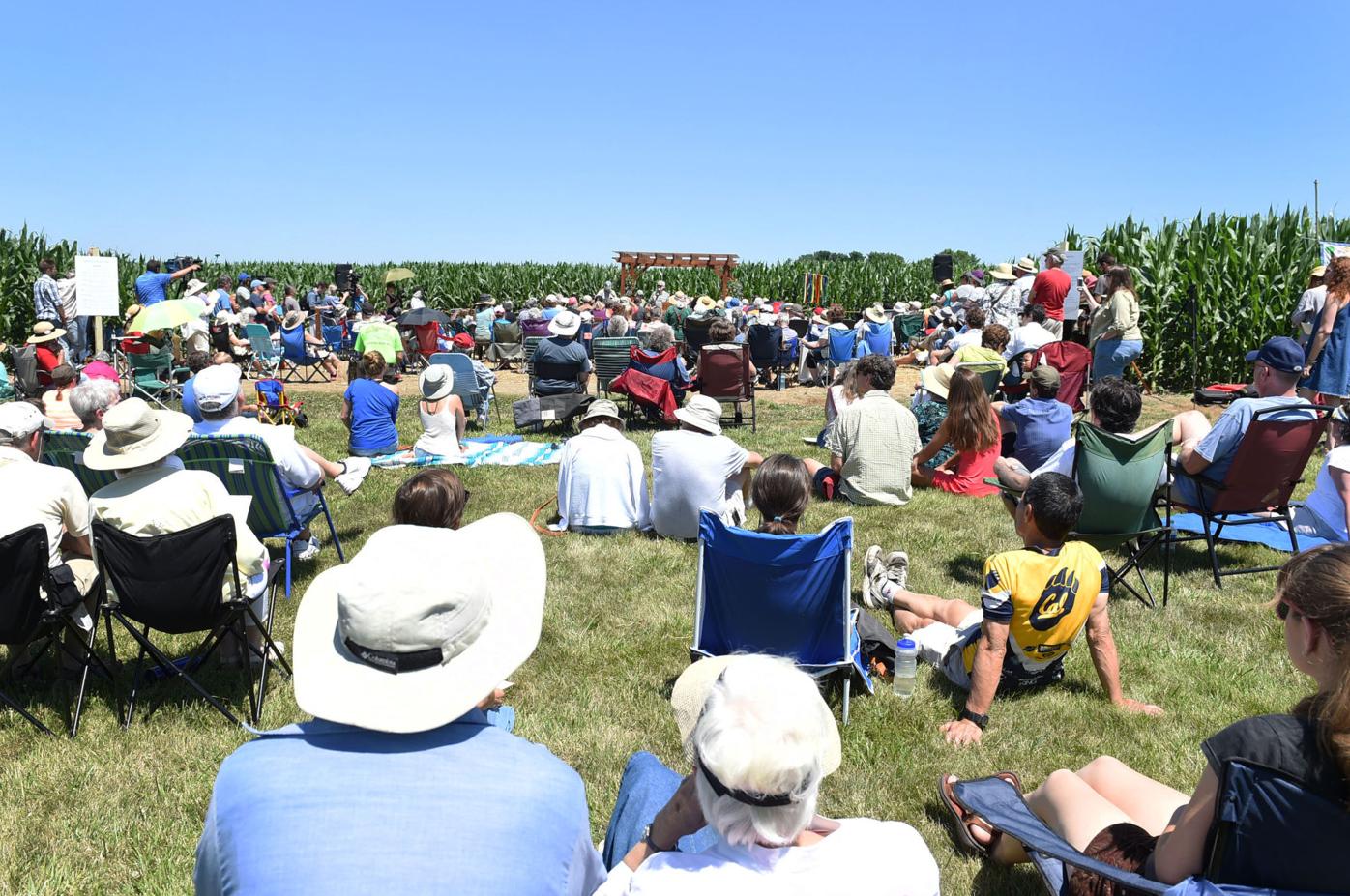 A n overall shot of the chapel dedication ceremony in West Hempfield Township on Sunday, July 9, 2017. 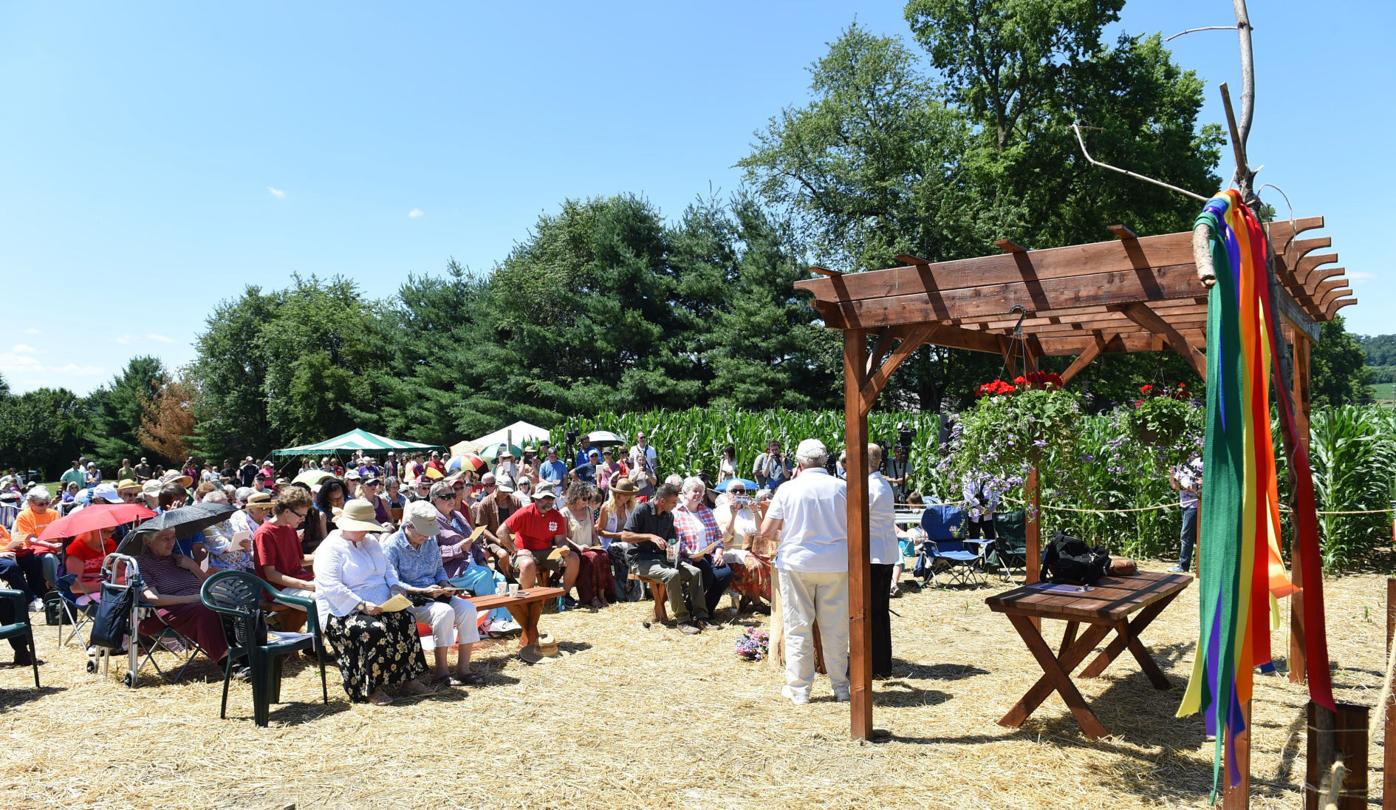 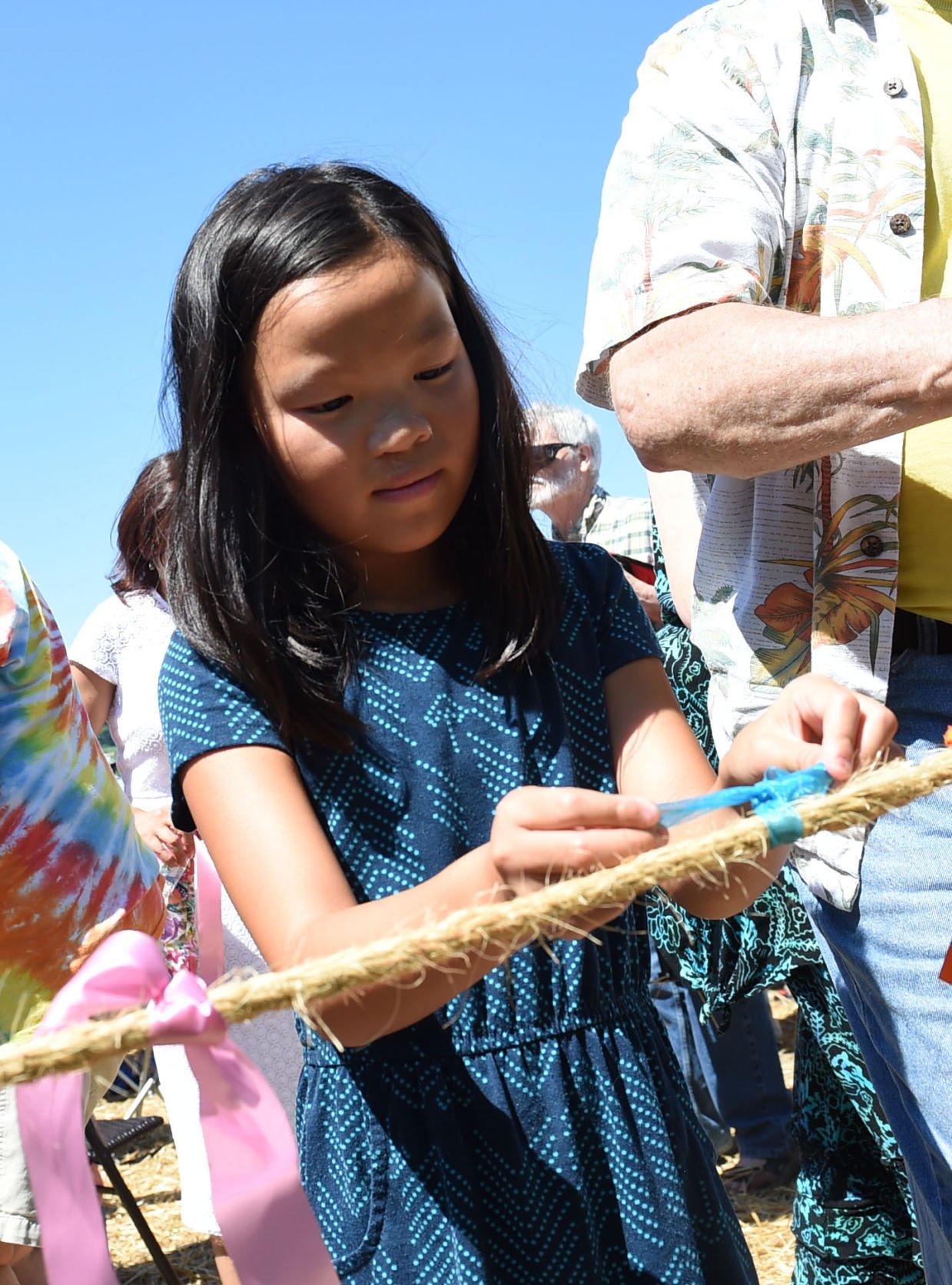 8-year-old Meiryn Brady, of Lititz ties a prayer ribbon on a rope during the chapel dedication in West Hempfield Township on Sunday, July 9, 2017.

“This is a holy cornfield,” Mark Clatterbuck, founder of Lancaster Against Pipelines, told a crowd of approximately 300 people Sunday afternoon.

They had gathered for a dedication ceremony for a modest, open-air prayer chapel in a West Hempfield Township cornfield. “We dedicate this land, this arbor as a place of holy resistance.”

The chapel is — at least for now — in the path of the Atlantic Sunrise Pipeline.

The property is owned by the nuns of the Adorers of the Blood of Christ religious order, which has been there since the 1920s and also runs St. Anne’s Retirement Community.

The nuns have refused to sell an easement for the pipeline to builder Williams, which is planning to start construction later this year. It violates their beliefs in regards to land and the environment.

The nuns gave Lancaster Against Pipelines permission to build the chapel — a pergola-type structure — in June.

At the time, Christopher Stockton, a spokesman for Williams, called the chapel a “blatant attempt to impede pipeline construction.”

On Thursday, a U.S. district judge refused to grant Williams immediate possession of the land.

Transcontinental Gas Pipe Line Co., a Williams subsidiary, is taking the nuns to court July 17 for an injunction, which would give the company the right to seize the land by eminent domain.

The 197-mile, $3 billion project was approved by the Federal Energy Regulatory Commission, though two state environmental permits are still needed.

It will run through 37 miles of Lancaster County.

On Sunday, there were high hopes that the nuns might just beat the pipeline.

Tim Spiese, board president of Lancaster Against Pipelines, said it is not wise to pick fights with nuns.

“It doesn’t look good,” he said. “When you’ve got a lot of people showing up to protest and support the nuns, it makes investors nervous.”

“It almost sounds to me like Williams is a little scared, and they should be,” Clatterbuck told the crowd, referring to the attempt for immediate possession. “This land is not for sale, and Williams understands this is not some sort of symbolic (act). This is real and sacred.”

For many, Williams’ quest to seize the property by eminent domain was what drew them to the dedication ceremony.

“I read the Constitution, and eminent domain must be for the public good,” said Nancy Blechschmidt, who lives nearby. “I am not reading the same Constitution as the judge who is allowing the taking of private property for private business.”

“This new route they are proposing is ugly — it’s about somebody’s profits,” said John Herr, who has mixed feelings about the pipeline. He added, “We are all complicit because we all use the fossil fuels that cause the pipelines to be lucrative.”

“You can’t stand by and do nothing,” said Judy Perilstein, who was volunteering at the food tent.

She noted how much she loves sitting in her back yard and watching the wild life around her.

“They think they can just go through and then plant over it. But it will lower quality of life, ” she said, adding she worried about safety issues, since the pipeline will be carrying natural gas.

Sisters George Ann Biscan and Sister Helene Truett, both of the Adorers of the Blood of Christ, read from the Land Ethic, which was approved by the order in October 2005.

“We treasure land as a gift of beauty and sustenance, we see it as a legacy for future generations,” was the final part of the reading.

The project was ultimately canceled in 2014, after an appeals court upheld an earlier ruling that eminent domain could not be used.

“Losing fights with feisty nuns is nothing new for Williams,” Clatterbuck said.

“We work for ethical justice to protect the future and the present generations,” said Sister Sara Dwyer, who came from the order of Adorers of the Blood of Christ in Washington D.C. “May this chapel be blessed and continue to bless this land.”

Clatterbuck told the crowd that Sunday’s dedication ceremony was just the beginning.

“Keep coming to this place,” he told the crowd. “Sit in silence, keep a continuous vigil.”

And, he said, “When the bulldozers come, we will be here to physically prevent the destruction from taking place.

He told the crowd they will need hundreds of people to defend the land.

Lancaster Against Pipelines announced it will sponsor a public prayer vigil Sunday evening in support of local Adorers of the Blood of Christ,…

Landowners on Atlantic Sunrise pipeline route testify against project: 'Myself and my entire family are deathly afraid'