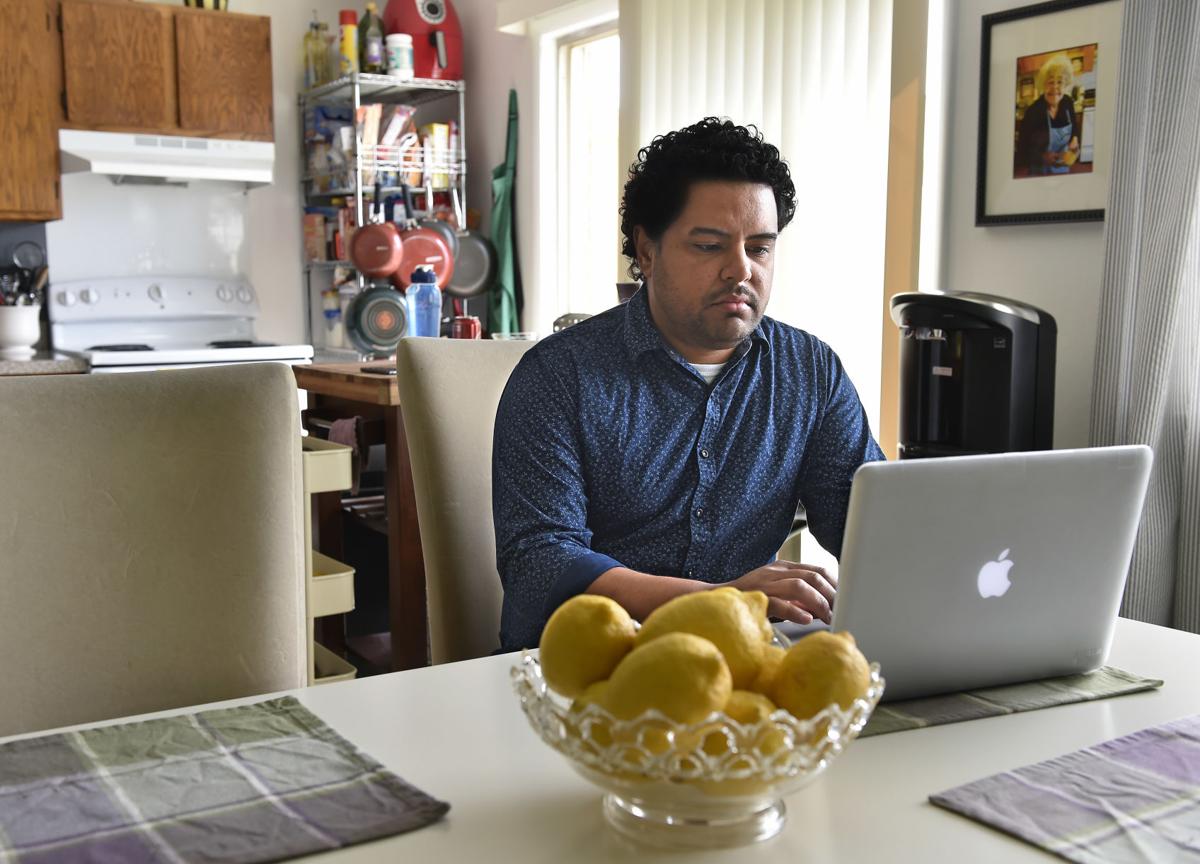 Eliud Diaz, who was laid off by WSP USA in Ephrata on March 19, continues to wait for the state Department of Labor & Industry to respond to his unemployment claim. He's shown here at his home in Lancaster city on Tuesday April 14, 2020. 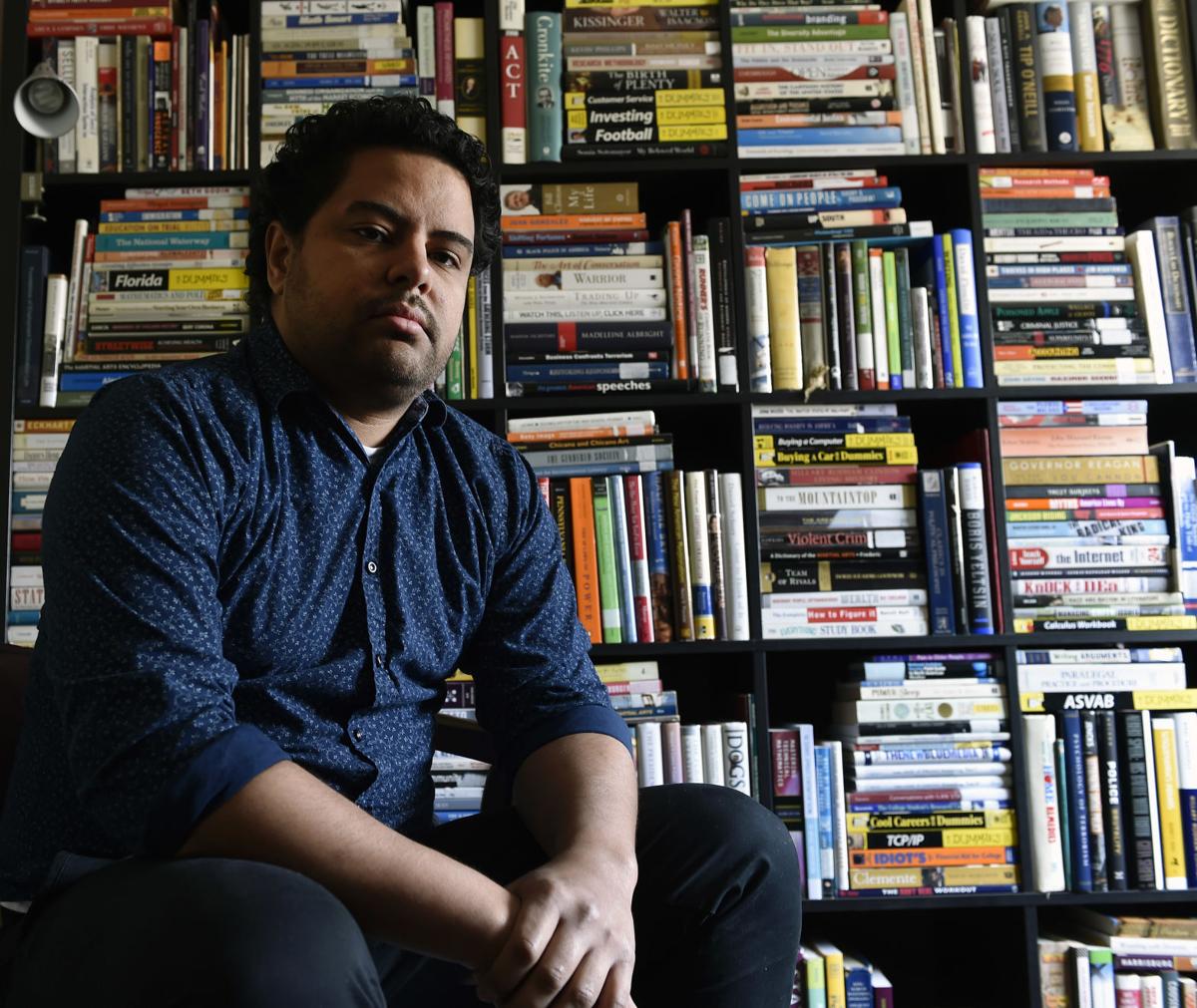 Eliud Diaz, was laid off by WSP USA in Ephrata, now waiting for a response to his unemployment claim, at his home in Lancaster Tuesday April 14, 2020.

Eliud Diaz, who was laid off by WSP USA in Ephrata on March 19, continues to wait for the state Department of Labor & Industry to respond to his unemployment claim. He's shown here at his home in Lancaster city on Tuesday April 14, 2020.

Eliud Diaz, was laid off by WSP USA in Ephrata, now waiting for a response to his unemployment claim, at his home in Lancaster Tuesday April 14, 2020.

Eliud Diaz still awakens to the sound of his alarm clock every weekday morning.

But he no longer goes to work at a civil engineering firm in Ephrata. He got laid off March 19 -- one of 1.3 million Pennsylvanians to lose their jobs due to business closures ordered by Gov. Tom Wolf to slow the spread of COVID-19.

His new job, as it were, is calling the state Department of Labor & Industry in an effort to check on the status of his unemployment claim.

Diaz opened a claim for unemployment benefits via the department’s website the same day he got idled. After two weeks of waiting for a response, he sent an email to L&I, but that didn’t generate a reply either.

After a couple more days of waiting in vain, Diaz began phoning L&I roughly 400 times a day, starting promptly when the office opens at 8 a.m. His calls have generated the same result as his email: nothing.

“I get a constant busy signal,” said the frustrated Diaz on Tuesday, following a ninth straight day of futile calling. “It’s been 26 days and counting” since he filed his claim.

In the meantime, he has connected with his former co-workers at WSP USA. While they were laid off and opened claims the same day as Diaz, they’ve already received their first unemployment benefits, said Diaz, 37, a Lancaster city resident.

But Diaz’s plight soon will be a thing of the past, L&I officials indicated during a press briefing Monday, disclosing an array of steps they’ve taken to handle the record number of new claims for unemployment benefits since the pandemic hit.

Those include 15,600 new claims from Lancaster County residents the past two weeks alone, according to L&I officials. New claims from local residents at the start of the pandemic were not immediately available.

L&I officials said they’ve added nearly 200 staffers in recent days to the 600 employees in L&I’s claim service centers. The goal of the hirings is to pare down the backlog of initial claims awaiting processing plus related phone calls and emails.

“It is frustrating. It frustrates us. It’s simply a matter of volume. That’s why we’ve brought on the extra people …,” said L&I Secretary Jerry Oleksiak.

“We are doing all we can. We want to get back to these people. We want to get them their benefits. It is certainly not for any lack of effort on the part of staff Labor & Industry. … I know that doesn’t satisfy people who are having that kind of difficulty but we’re as frustrated as you are.”

Oleksiak noted that the historic four-week volume of 1.3 million claims compared to 40,000 initial claims being filed during the preceding three weeks. Exacerbating matters is the fact that the L&I computer system is “old,” he said; it’s so old that it’s scheduled to be replaced in October.

To help deal with the deluge, L&I is bringing back 70 recent L&I retirees. They’re getting updates on what’s changed since they left the department, then are expected to be back at work by the end of the week.

In addition, the department is hiring 100 more staff plus getting employees transferred over from other state government departments.

But there’s more to the solution than putting additional warm bodies in seats.

“Unemployment is a complicated program. It’s not something that someone can just walk into and be able to do proficiently, not even within six months,” said Susan Dickinson, director of the Office of Unemployment Compensation Benefits Policy.

“So we’re trying to triage it as best as we can, to have those helpers take care of some of the simple things while those of us who are more well trained and have been here a while can take care of the more complex issues,” she said.

Another issue is the sheer volume of claims, phone calls and emails.

One backlog it has eliminated, according to Dickinson, is the number of initial claims awaiting processing. Normally, L&I needs five to seven days to respond by mailing the claimant a confirmation letter and a personal identification number, which claimants need to take the next step, known as filing a biweekly claim.

With the flood of initial claims, it was taking L&I up to three weeks to get letters and PINs in the mail, Dickinson said. The backlog was eliminated by L&I’s mailroom staffing putting in more than two extra shifts over the weekend, she indicated.

“As of this morning,” she said Monday, “due to this weekend’s work, we were all caught up with PINs and from this point forward, there shouldn’t be an issue.”

Claimants idled by the COVID-19 pandemic will get benefits for all the time since their layoff, she said, even if their letter and PIN arrive late; an April 10 cutoff date posted on the L&I website for entering a PIN for a claim started the week of March 15 was eliminated, she indicated.

While Diaz hopes his PIN is in the mail, the marketing editor worries about juggling his debts. He owes $2,400, mostly rent and a car payment, which he can cover – “I’ve never been late on any of my bills” -- but would require wiping out his savings.

“I’ve ran the gamut of emotions, sometimes all in one day. There are days when my anxiety over the uncertainty has me in a bad place,” said Diaz.

“I understand the enormous pressure L&I (is under). However, I’m frustrated because I haven’t received ANY information in almost four weeks’ time and I’m angry because the delay is making me look bad to my landlord and creditors awaiting payment.

“Financial independence is something I always had because I’ve worked since I was 16,” Diaz continued in an email, “and to experience the feeling of asking for a rent extension was very new to me.”

Lancaster County jobless rate hits record high: How does that compare to past years? [timeline]

The jobless rate in Lancaster County has hit a high that eclipses all previous peaks seen for nearly 50 years.

Mick Owens has 120 reasons to like the new Paycheck Protection Program, a federal economic-stimulus initiative for small businesses that’s par…

A month and a half after the federal coronavirus aid bill extended unemployment benefits for 13 weeks, Pennsylvania still hasn’t set up a prog…