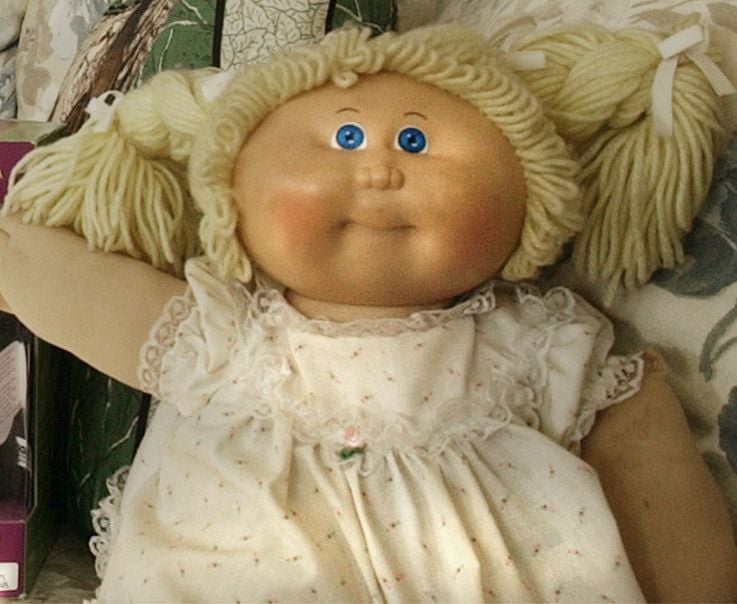 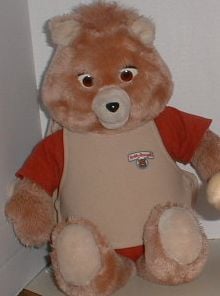 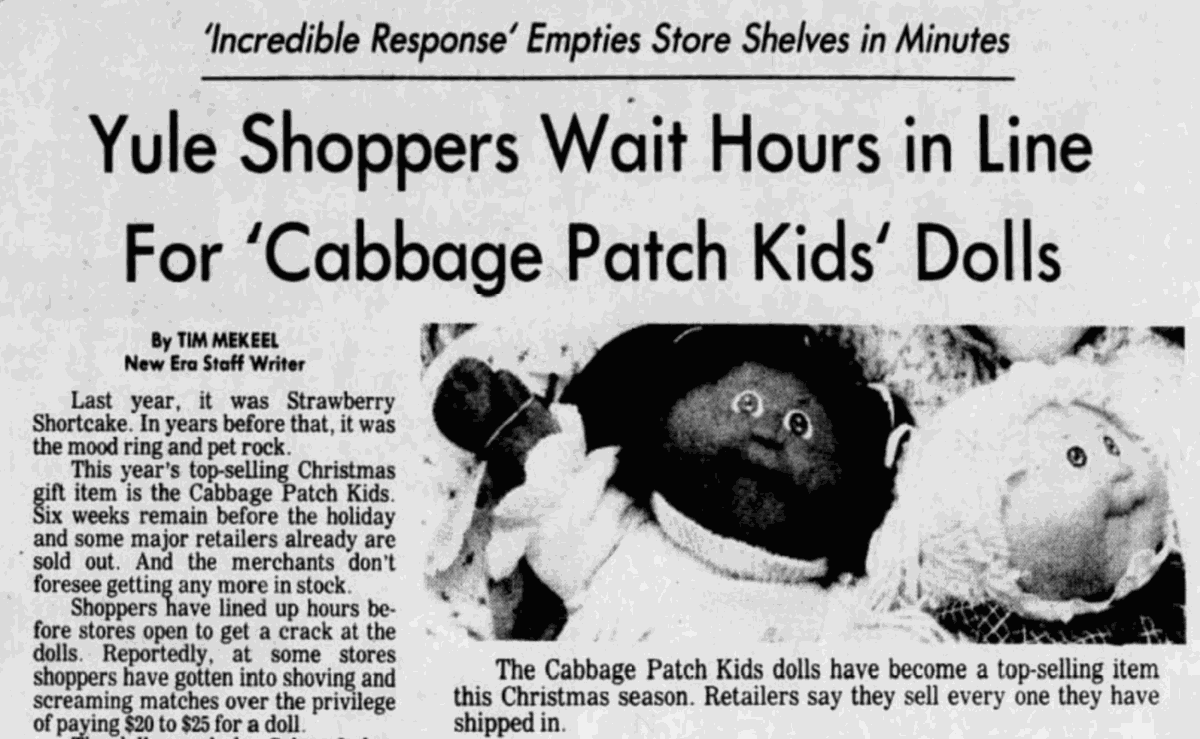 These photos of Transformers appeared in the Nov. 25, 1984, Sunday News. 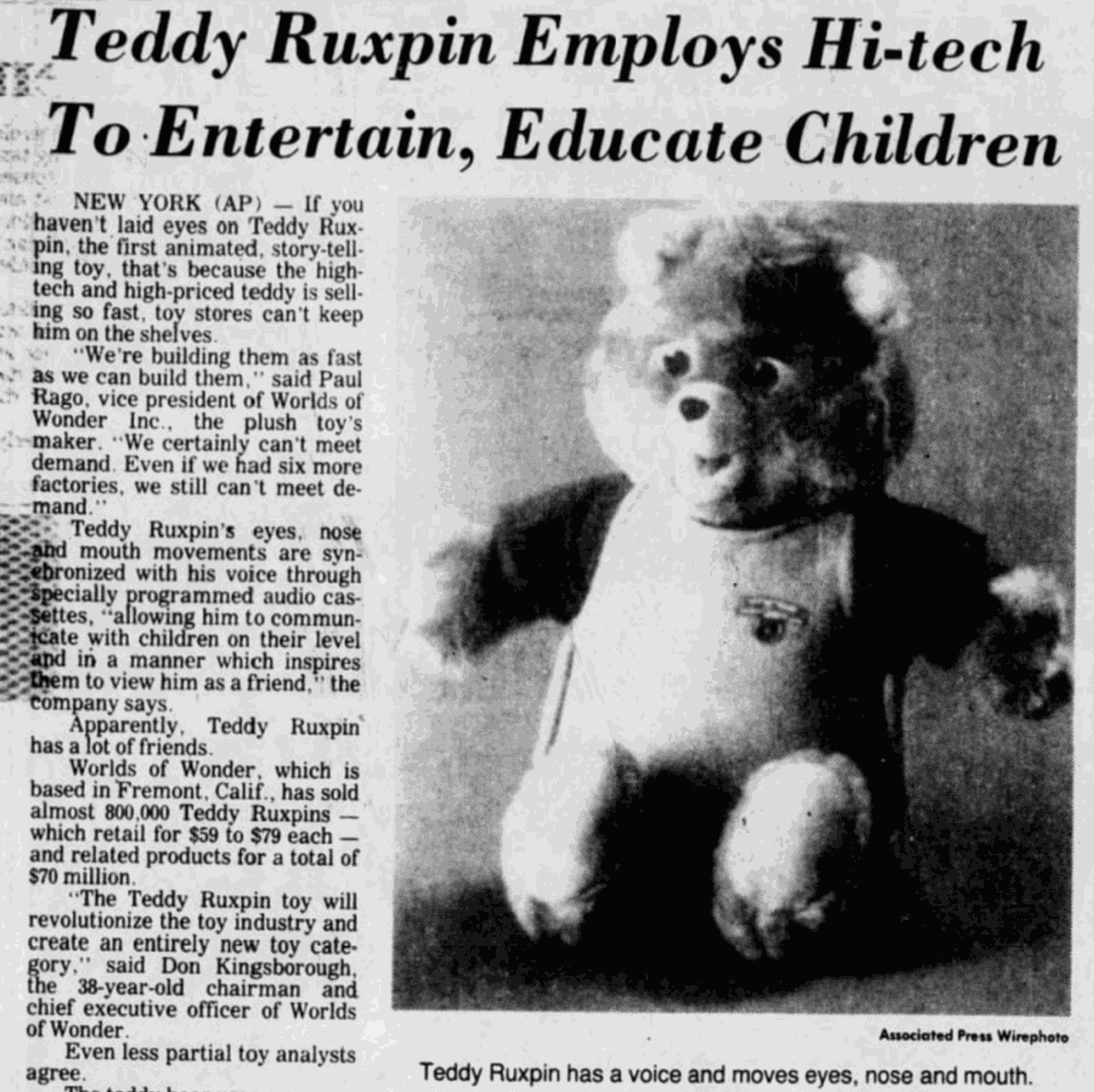 This article appeared in the Nov. 28, 1985, Intelligencer Journal. 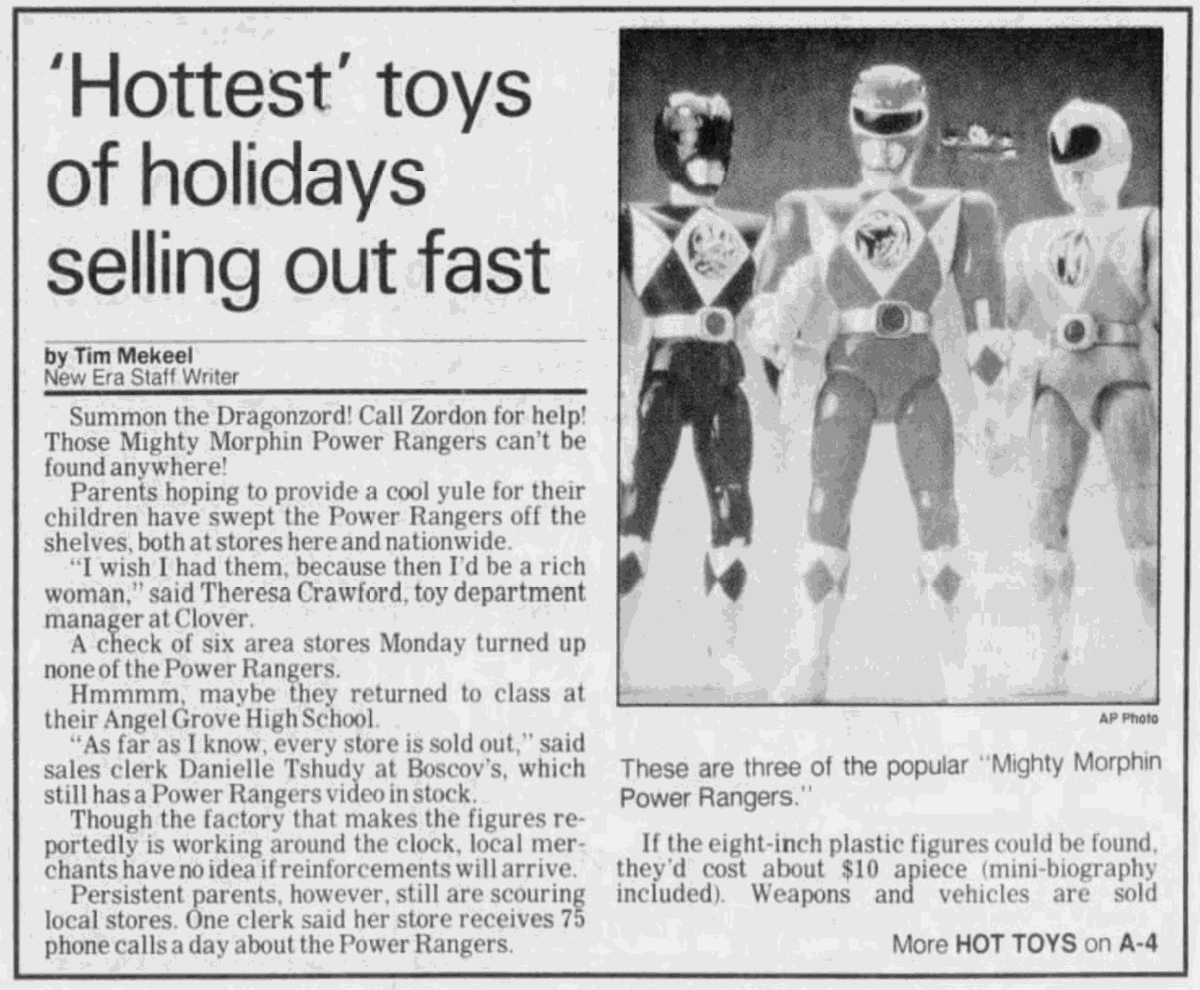 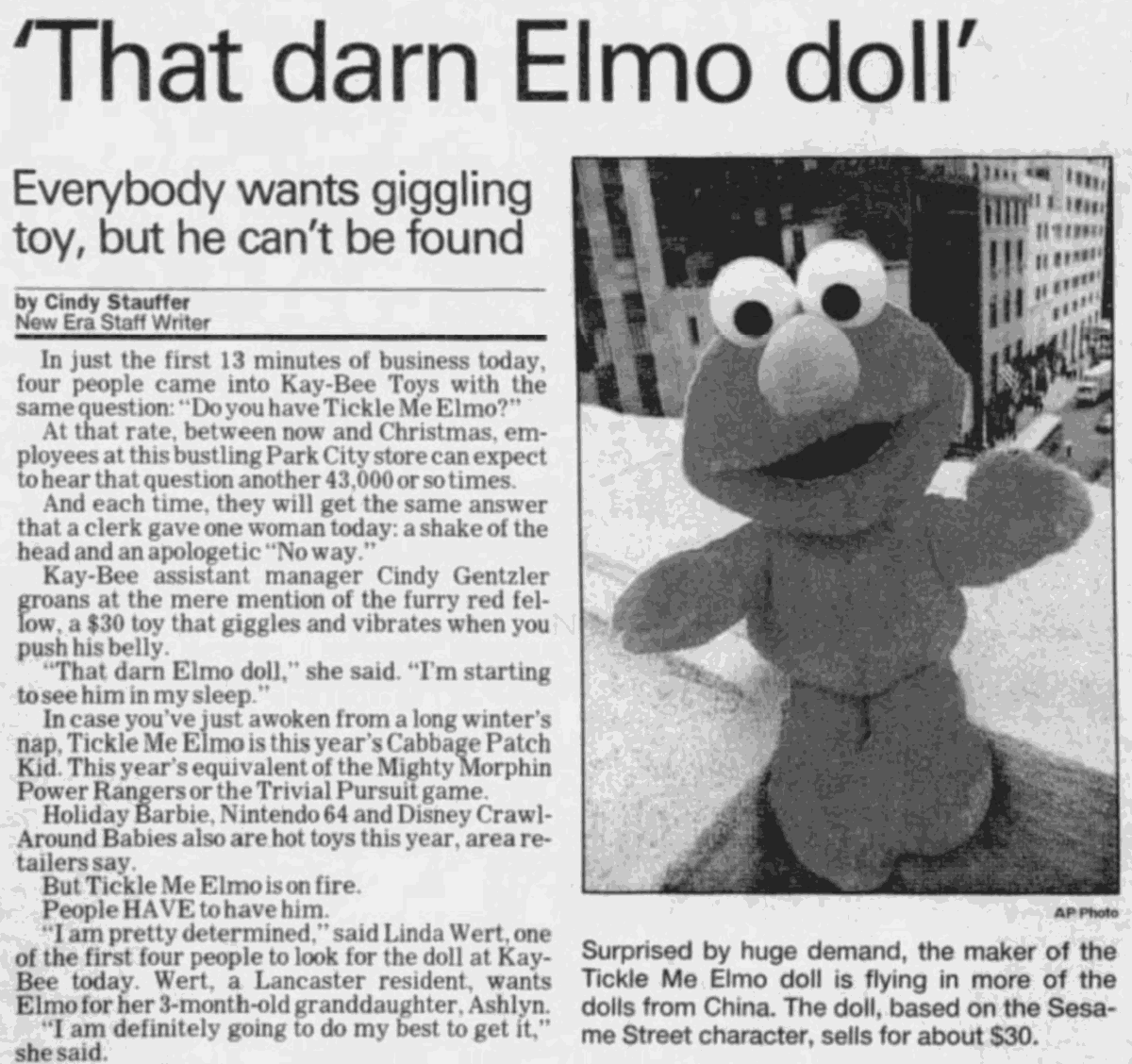 This headline, from the Sept. 7, 1997, Sunday News, summed up the media's initial reaction to Tamagotchi. 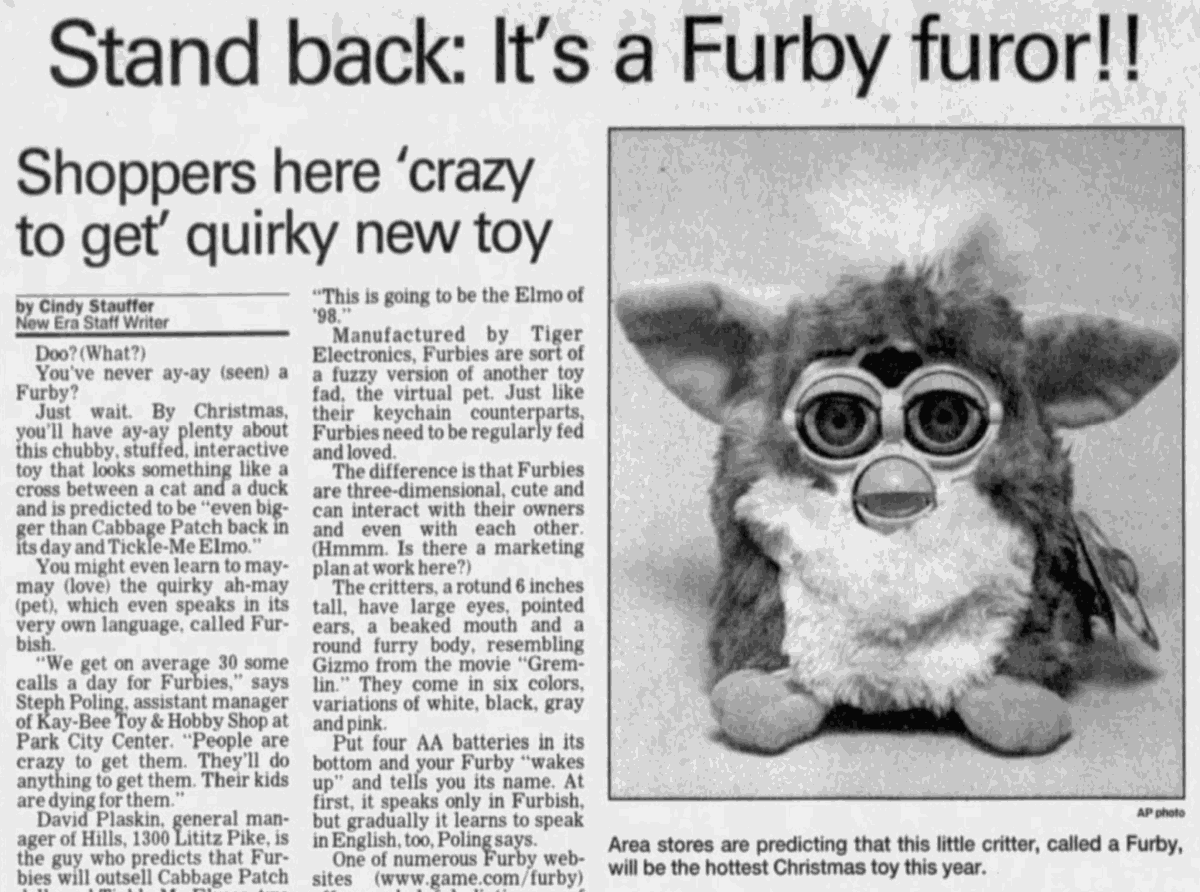 This whole phenomenon may have started with the humble Mr. Potato Head, who made history in 1952 as the first children's toy to be advertised on television. (Back then, you had to supply your own potato. No, really.)

Over the past decade or so, there have been Hatchimals, LOLs, talking Doc McStuffins, Xbox, Nintendo Switch and more. And over the years and the generations the level of demand seemed to increase dramatically.

Digging through the LNP | LancasterOnline archives, we found that holiday toy-shopping madness had a sweet spot - if you can call it that - in the '80s and '90s. This is the era when kid-targeted advertising had fully ramped up, but online shopping hadn't completely taken off, and parents flocked to stores to try to grab one of the year's top toys.

You might recall these toys first-hand - perhaps you were a '90s kid, and just had to have a Tickle Me Elmo.

Or maybe you were a parent of an '80s kid, and survived the great Cabbage Patch Riots of '83.

Regardless, see how many of these toys you remember owning or buying.

Throughout the '50s, '60s and '70s, there were countless toy trends - from G.I. Joe to Pet Rocks to Star Wars action figures - but nothing had prepared the world for the madness that surrounded the chubby little dolls known as Cabbage Patch Kids.

Perhaps it was the fact that each unique doll came with a birth certificate and adoption papers, or perhaps it was simply mass hysteria, but the Cabbage Patch frenzy led to tramplings and fist fights in stores around the country, as parents struggled to get their hands on the perfect toy for the 1983 holiday season.

In Lancaster County, there were no reports of Cabbage Patch-related violence, but as this article explains, local retailers deliberately took steps to avoid such scenes - including JC Penney at Park City Center, where a crowd of a thousand people lined up before the store opened to get a crack at one of the 120 dolls that had been shipped in. To prevent possible bloodshed, the customers were led into the back storeroom one at a time to pick out their dolls - which never even made it to the sales floor.

Cabbage Patch fever hadn't even fully died down before the next toy trend took over the holiday shopping season in 1984. Transformers, the "robots in disguise," arrived on U.S. shores from Japan.

This article about the top toys in Lancaster County for the '84 holiday season features Transformers prominently - even though Optimus Prime is misnamed "Optimist Prime." Sigh.

Teddy bears have been popular gifts for generations, but in 1985, a new wrinkle was added - this teddy could actually talk. Thanks to cassettes that were inserted into the bear's back, Teddy Ruxpin could tell stories about the fantasy land of Grundo, complete with synchronized eye and mouth movements.

High-tech for the time, Teddy Ruxpins were selling faster than manufacturer Worlds of Wonder could produce them, as this article indicates. (It also explains the origins of the name - apparently, Worlds of Wonder thought the name Ruxpin would be a challenge for kids to say, resulting in adorable mispronunciations. Turns, out kids could say "Teddy Ruxpin" just fine - especially while sitting on Santa's lap.)

The next Japanese import to swamp Christmas lists were the Power Rangers.

Spawned, once again, from a kids TV show, these heroes were an unexpected success in the U.S. Critics panned the show, and even toymaker Bandai didn't expect the resulting action figures to be a hit.

But, to quote this New Era article, "why should kids care what adults think, when a show has good stuff like dinosaurs, monsters, karate, special effects and attitude?"

Fair enough. The massive popularity of the Power Rangers meant yet another toy in short supply come shopping season.

Like the Cabbage Patch Kids, but 13 years later, this fuzzy friend was the one gift for which parents were ready to go to the ends of the Earth.

Sesame Street's lovable Elmo has been the top toy for several holiday seasons over the last three decades, but this is the first and best-remembered version of a gotta-have-it Elmo.

"That darn Elmo doll" is the quote that serves as the headline to this New Era article, and it perfectly encapsulates the frustration and resignation shared by shoppers and store clerks alike when facing the looming Elmo shortage.

While this item didn't suffer any shortages or cause any riots, its sheer, overwhelming popularity meant we just had to add it to the list.

Tamagotchi were keychain-sized plastic eggs with small screens through which you could "interact" with a virtual pet. This Associated Press article displays the typically bemused reaction the American media had to the notion of paying for a toy that provided all the hassle and responsibilities of taking care of a pet with none of the tangible rewards.

Once again, the media had it wrong, as Tamagotchi were tremendously popular, not only with kids - who had to turn them over to teachers so as not to be minding their virtual pets while in class - but also with adults, some of whom collected them by the dozens.

Arguably the next logical evolution from the Tamagotchi, the Furby was another sort of virtual pet - it still required attention and care, but this time it came in a three-dimensional form that looked like something between a duck and a kitten.

The main fascination with Furbies was their ability to learn - when you first unpacked your Furby, it spoke a nonsense language (Furbish) but learned English words over time.

Furbies could also interact with one another, sensing each other's presence in a truly uncanny feat of '90s tech. They could also wiggle, sing songs and play simple games with their owners.

This article discusses the newly released toy in detail, and also warns holiday shoppers that the Furby is likely to join the ranks of the Cabbage Patch Kids and Tickle Me Elmo as a toy with high demand and short supply.