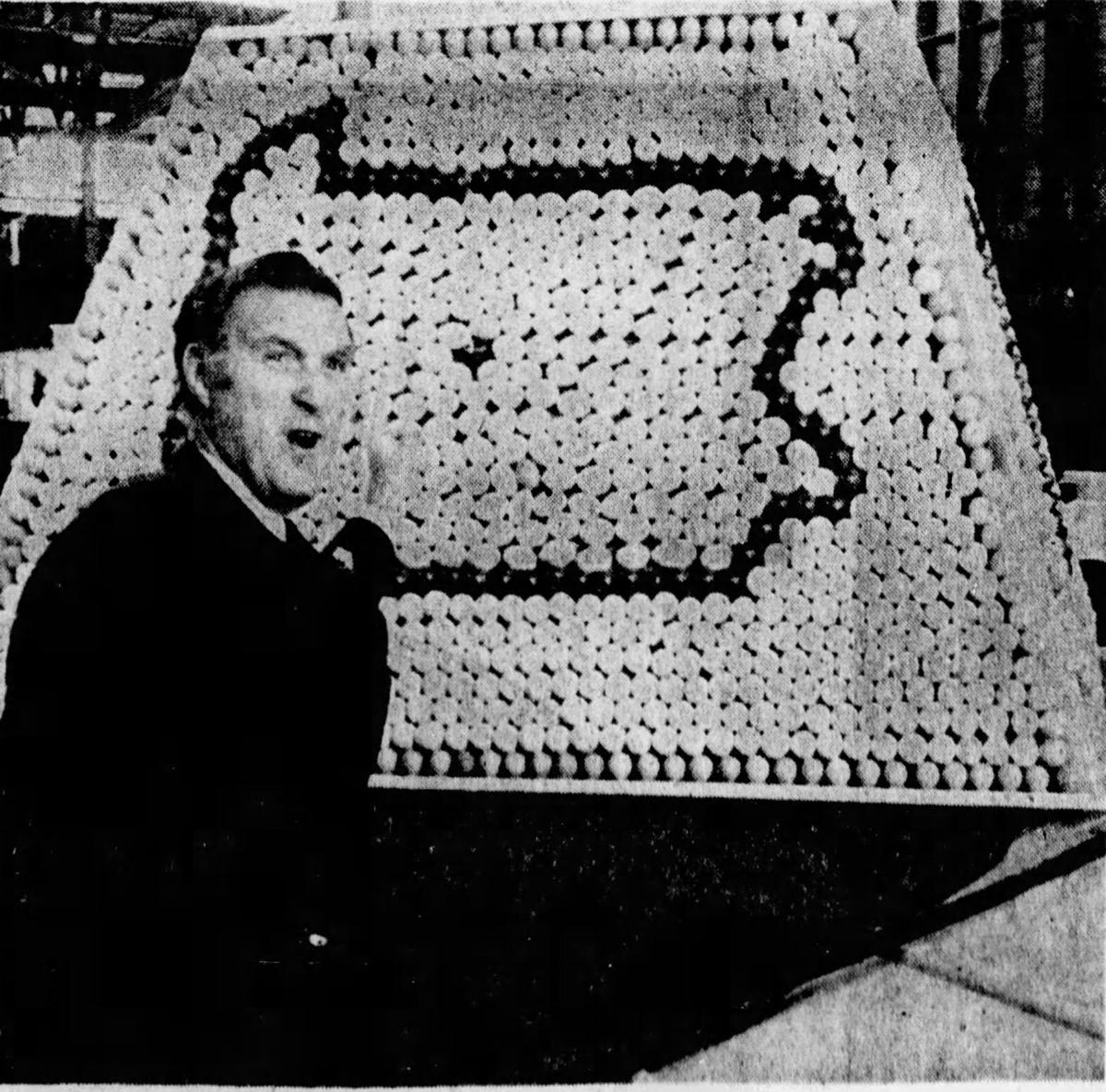 Still insisting Penn State is Number One, Governor Raymond P. Shafer points to an egg painted blue with a white number one, in the center of a Pennsylvania map made of eggs at the Farm Show in Harrisburg in 1970. 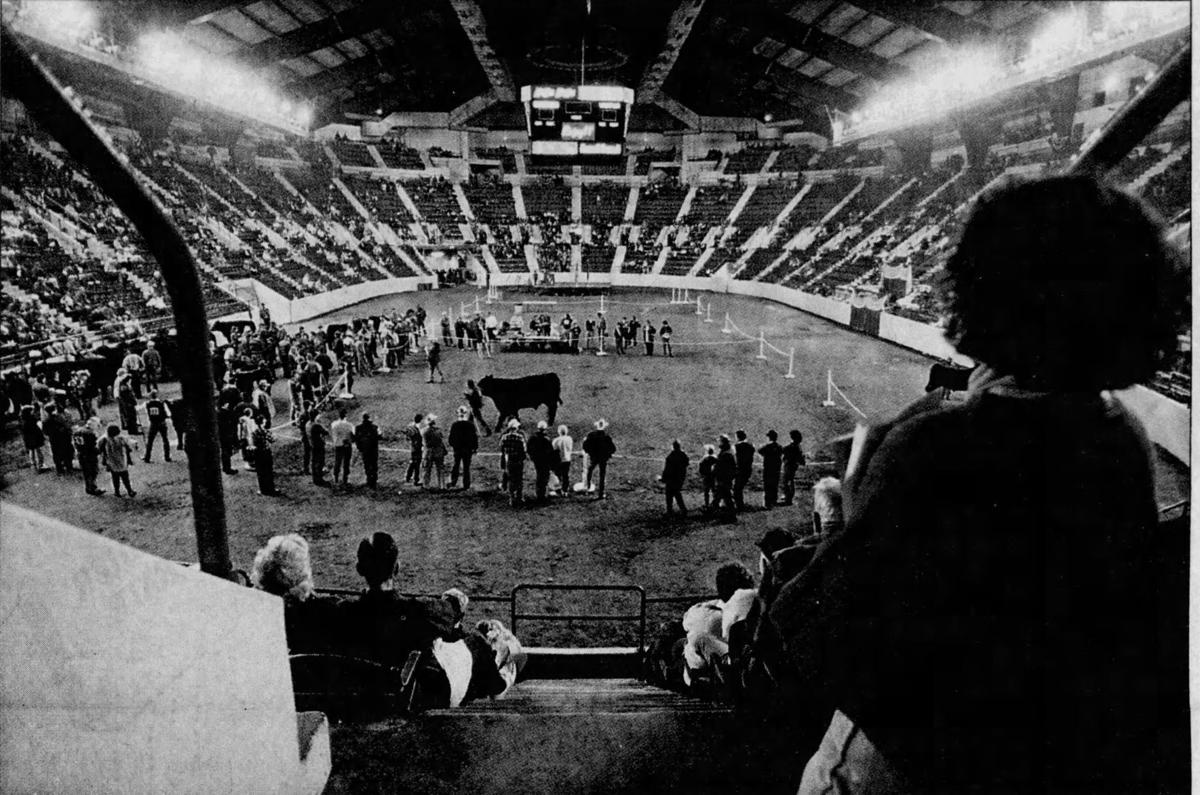 Beef cattle strut their stuff before the judges on the dirt floor of the large arena during the 1995 PA Farm Show. 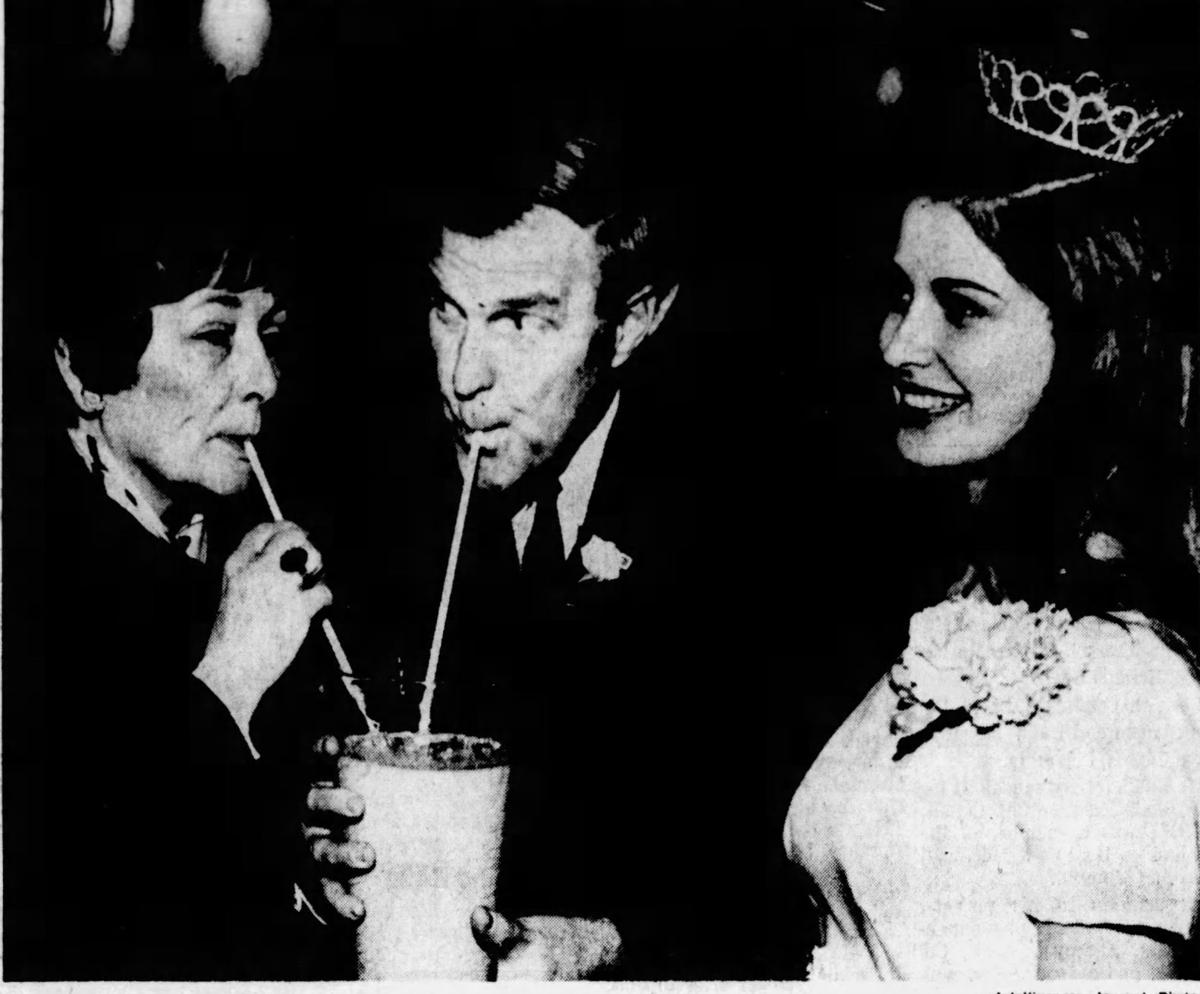 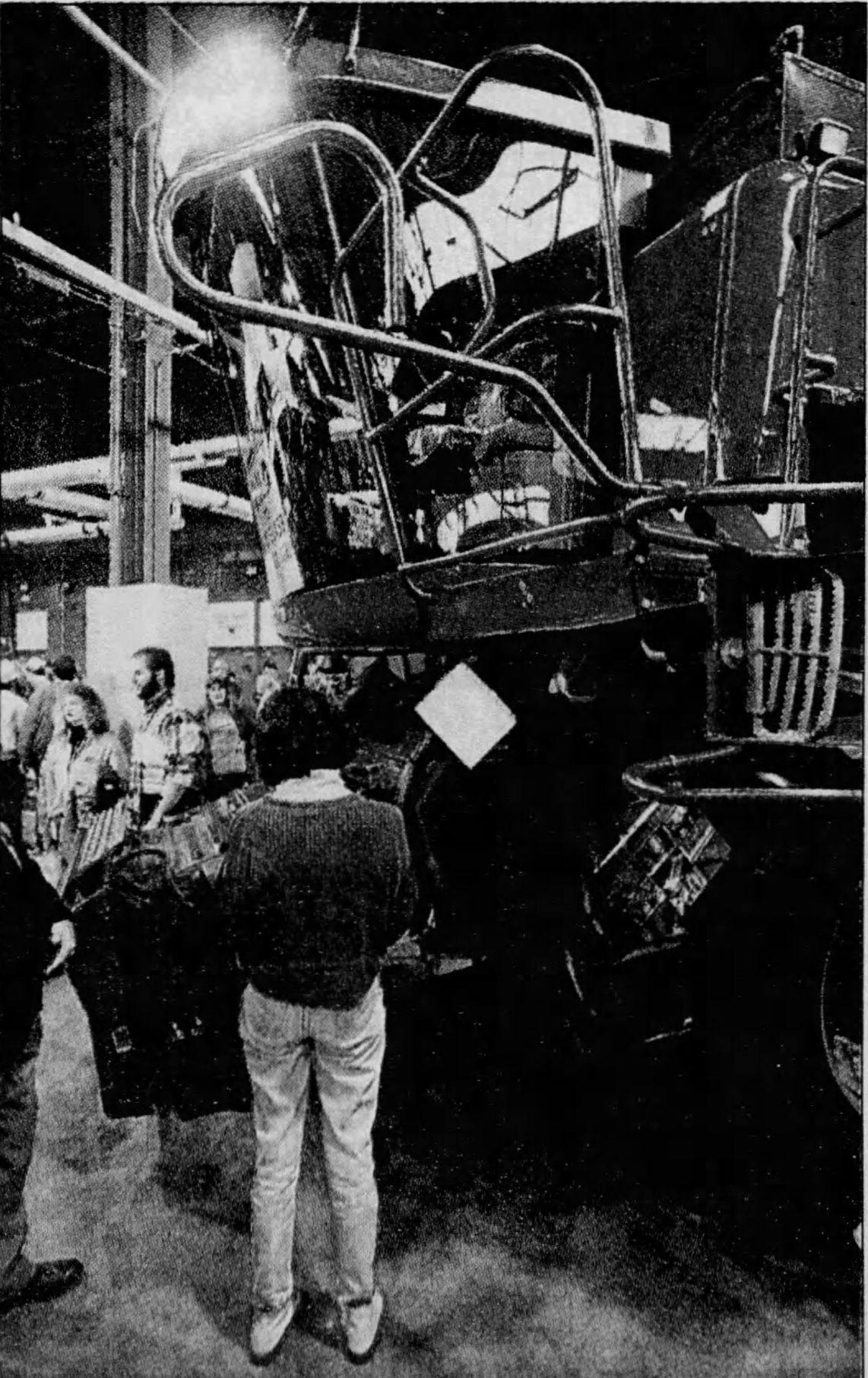 The Axial Flow Combine looms over passers-by at the 1995 PA Farm Show in Harrisburg.

Pennsylvania Farm Show visitor Margaret Gates was in the Food Court, hungry and feeling reckless. The Farm Show Food Court offerings did not disappoint: sliced emu with wasabi noodles was just the thing.

Why was New Era reporter Margaret Gates feeling reckless? Having let slip that she had never been to the Farm Show, Gates was promptly elected to do a first-person “first-timer” story. She had one visit to experience as much as possible of the storied Pennsylvania Farm Show.

Gates walked the reader through the show, starting with picking up a map and guidebook and choosing exhibits to see.

As she navigated the crowds, Gates had several up-close encounters with farm animals being moved around the huge complex, something that happens very frequently during the week. (It’s a Farm Show. Farm animals are just part of the crowd.)

At one point Gates came across two young girls taking a rest – inside the giant tires of a piece of humongous farm machinery. Venturing closer to check out the information card, Gates learned that she was staring up at an Axial Flow Combine with “air suspension seat, air conditioning, base instrumentation, tinted windshield, and AM/FM radio with weather band.” Impressive!

Of course she visited the giant butter sculpture. It’s a must-view, after all. In 1995 the subjects were World War II soldiers.

Gates described the next leg of the journey by following her nose. She caught hints of Christmas at an evergreen display, sweet honey in the apiary and the crisp scent of apples. The gorgeous fruit display kick-started her appetite.

Just in time, Gates found herself in the Food Market, surrounded by tasty samples of Pennsylvania products. Blue corn chips, pretzels and microwavable stew (she passed on that one) were available.

After all that, real hunger pangs set in. Finally it was Farm Show Canteen time.

Fortified, she moved on to watch the cattle judging before her Farm Show day ended. Realizing how much there was to see, Gates vowed to return in the future – and she did.

The PA Farm Show wasn’t just the purview of intrigued journalists. A custom called The Governor’s Review was observed at the venue.

In 1970, the privilege fell to Governor Raymond P. Shafer.

Governor and Mrs. Shafer started off their review with a whirlwind tour led by the Pennsylvania Dairy Princess, Susan Custead, and other Farm Show royalty.

The Governor then had a look at the myriad products of his state – at least those products that made it through the heavy snow to get there. He had to forgo the traditional Amish buggy ride because of the weather.

More Farm Show royalty representing every agricultural product in the state offered samples to the Governor, who dutifully tried each and every one.

While they wouldn’t get such royal treatment, 450,000-700,000 people would pass through the Farm Show in the next week. They would undoubtedly sample the same fare, and many would meet the Dairy Princess and her entourage. Buggy rides? Only time and temperature would tell.

We uncovered a forgotten vault in the depths of the LNP building. Here's what was inside

There were days in the 1940s when minor mishaps far outpaced local news stories in the newspaper.

Of course, the mishaps were local news stories. Countians must have looked forward to seeing these informative little briefs. Who would need to be visited in the hospital? Who might want a comforting meal? Who would be the victim of good-natured jokes over the next week at work? These seemingly inconsequential blurbs must have been eagerly read daily.

In one day’s paper:

George Myers bruised his foot when a piece of iron fell on it. He was treated at St. Joseph’s Hospital.

Richard Frailich, 33, lacerated his thumb on a meat slicer, according to staff at St. Joseph’s Hospital.

And in ladies’ mishaps:

Twenty-eight-year-old Mary Kasarda cut her fingers on a can opener, reported staff at Lancaster General Hospital.

Thirteen-year-old Nancy Ann Walter cut her forehead in a fall and was treated at Lancaster General Hospital.

Darine Irvin, just 4, was treated at St. Joseph’s Hospital for cuts received when she walked into a hook on a door.

Daylight Saving Time was getting a lot of attention in Lancaster in 1920.

The county had enacted daylight saving hours during World War I in order to save on electricity when resources were scarce.

Apparently, the adjusted hours were popular with Lancaster residents and businesses. Many did not want to give up the practice when the war ended and Congress repealed the Standard Time Act.

Lancaster City Council was prepared to take up an ordinance of its own, and many people came forward to voice their opinions.

George W. Leonard Jr. was expected to present the Daylight Saving resolution to City Council at the next meeting.

The 2020 Pennsylvania Farm Show came to a close on Saturday. As farmers and young people showed off their best livestock and crops, federal an…