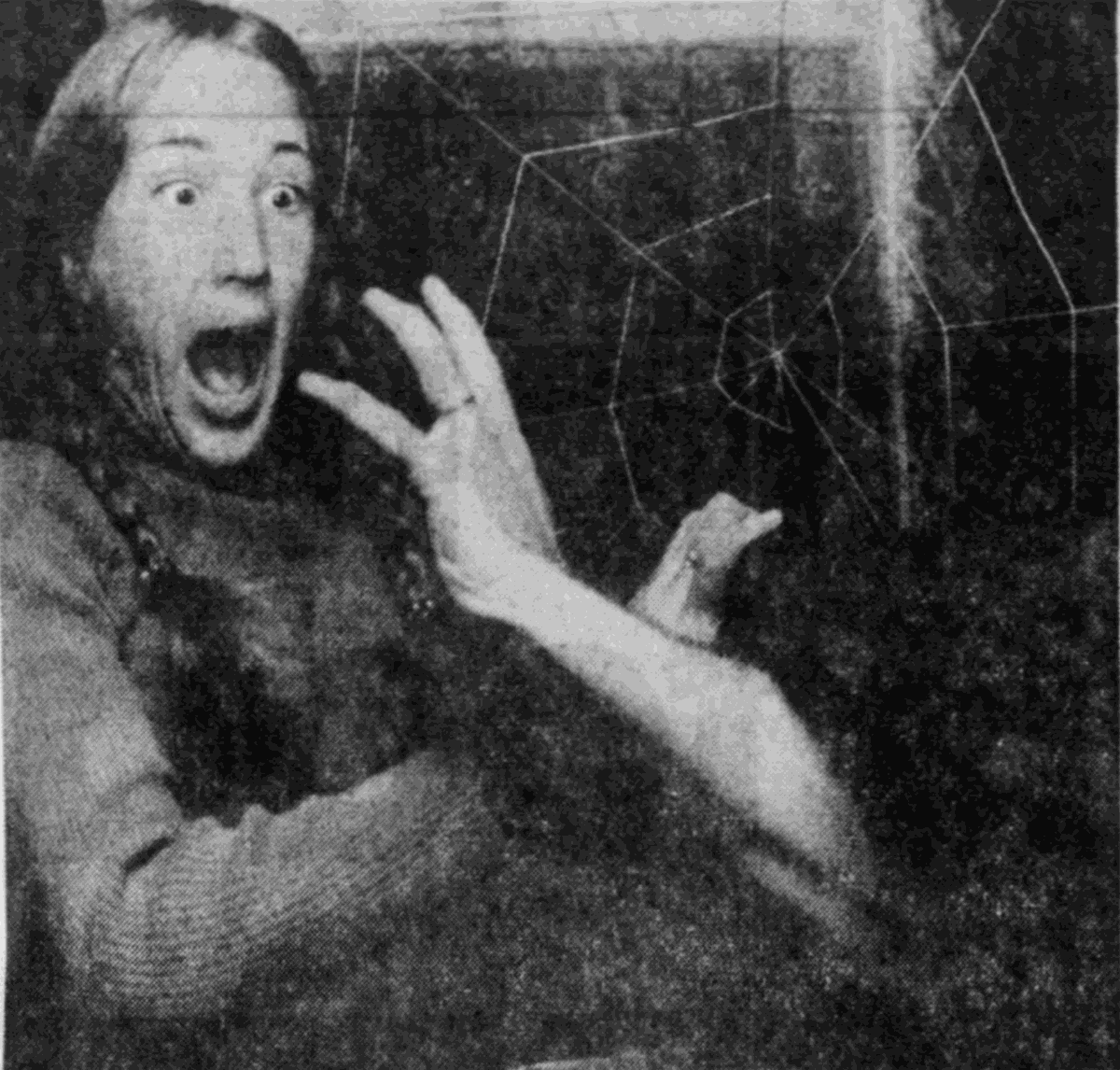 Donna Miller screams in the dark, as she realizes a supposed cadaver in the "morgue" is a real live person. 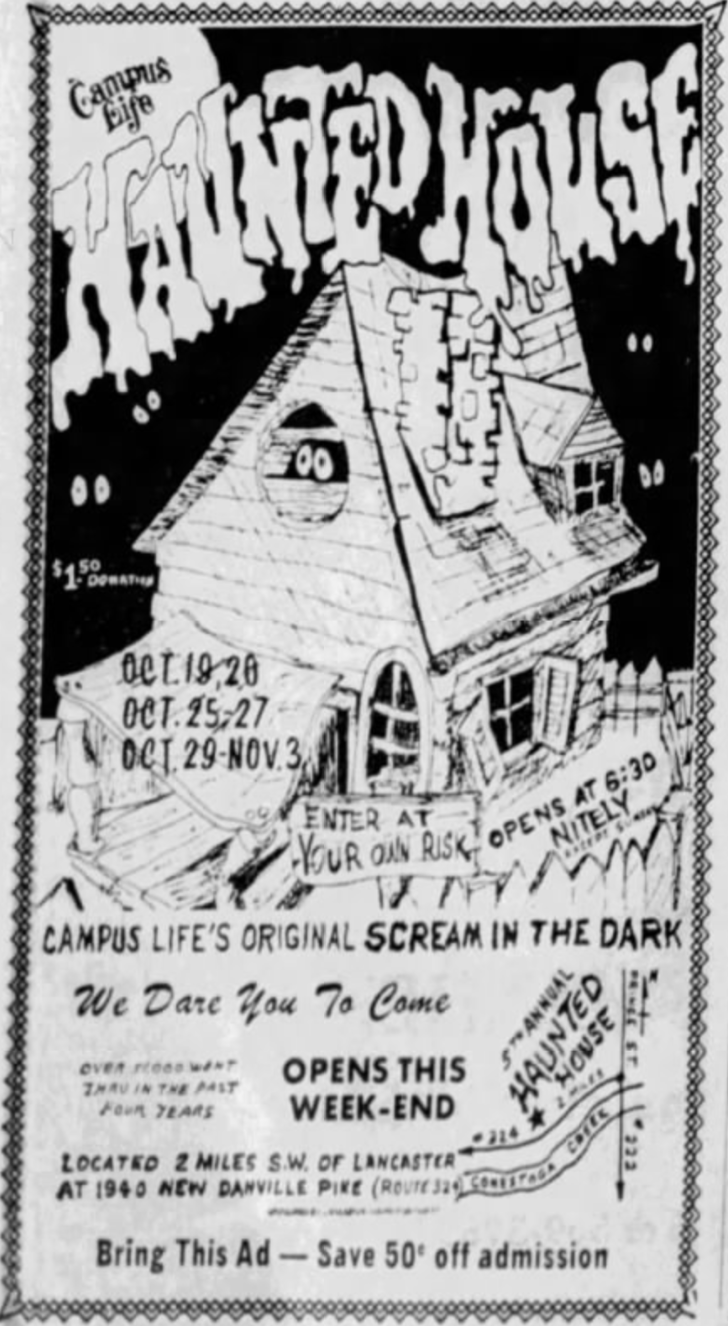 This ad for Scream in the Dark appeared in local newspapers on Oct. 19, 1973. 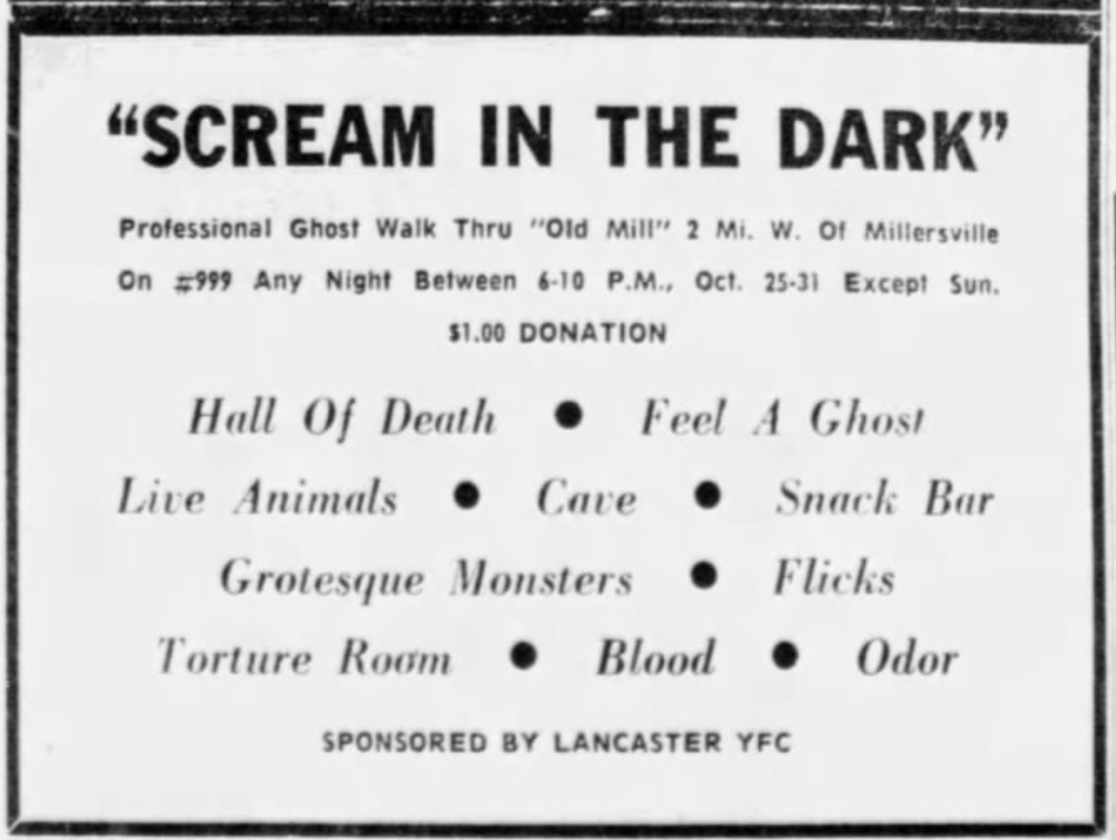 This ad, for the first year of Scream in the Dark, appeared in local newspapers on Oct. 24, 1969. 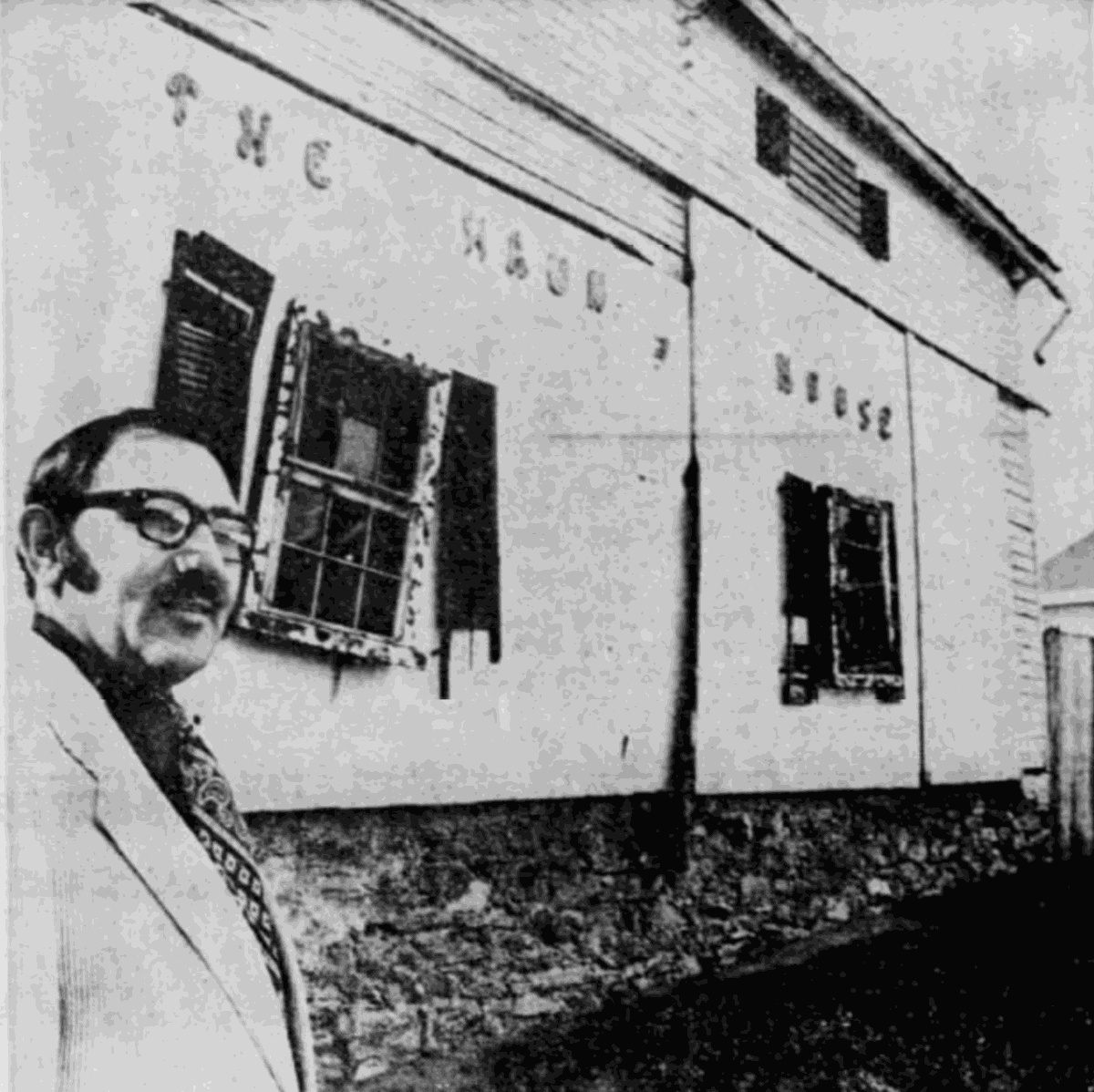 Lancaster Youth for Christ's Amos Esh was closely involved with Scream in the Dark, from its inception through its rise to regional fame. 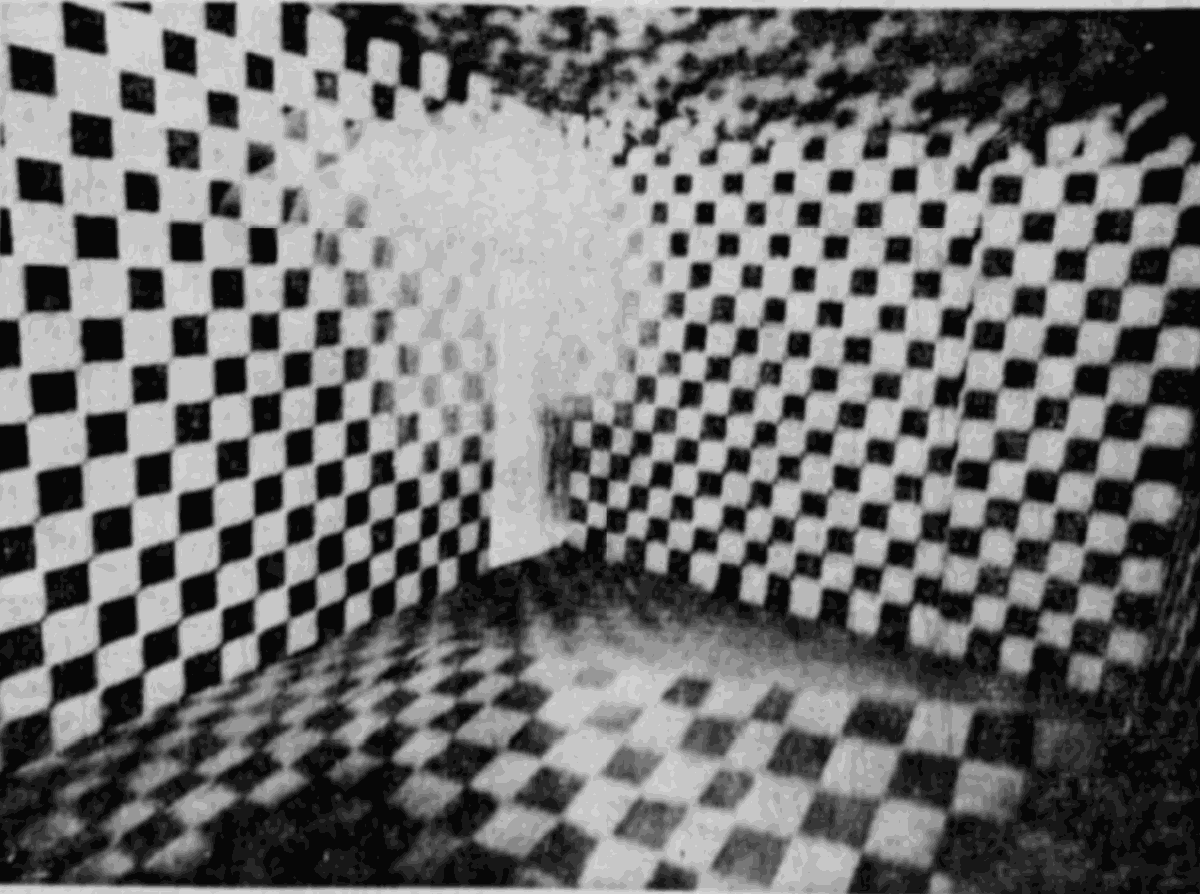 The "black and white room" was designed to disorient visitors. 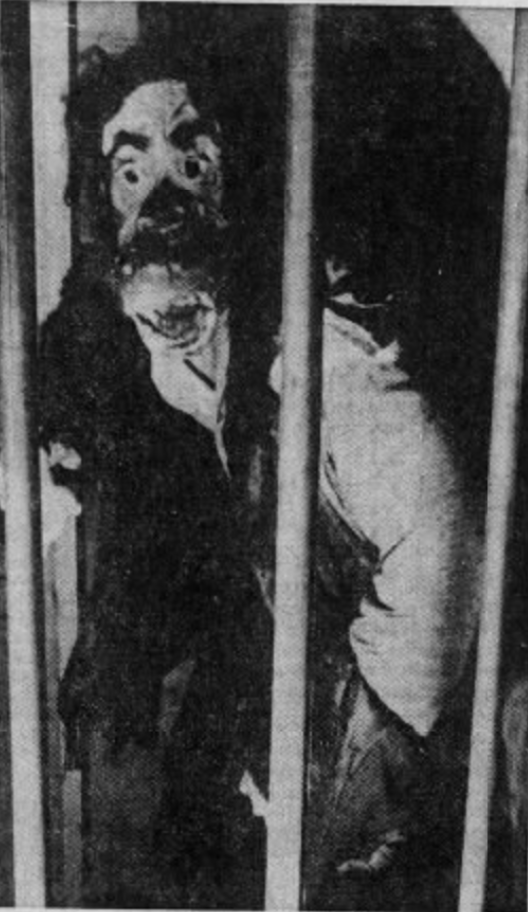 The "maniac" from the early years of Scream in the Dark. 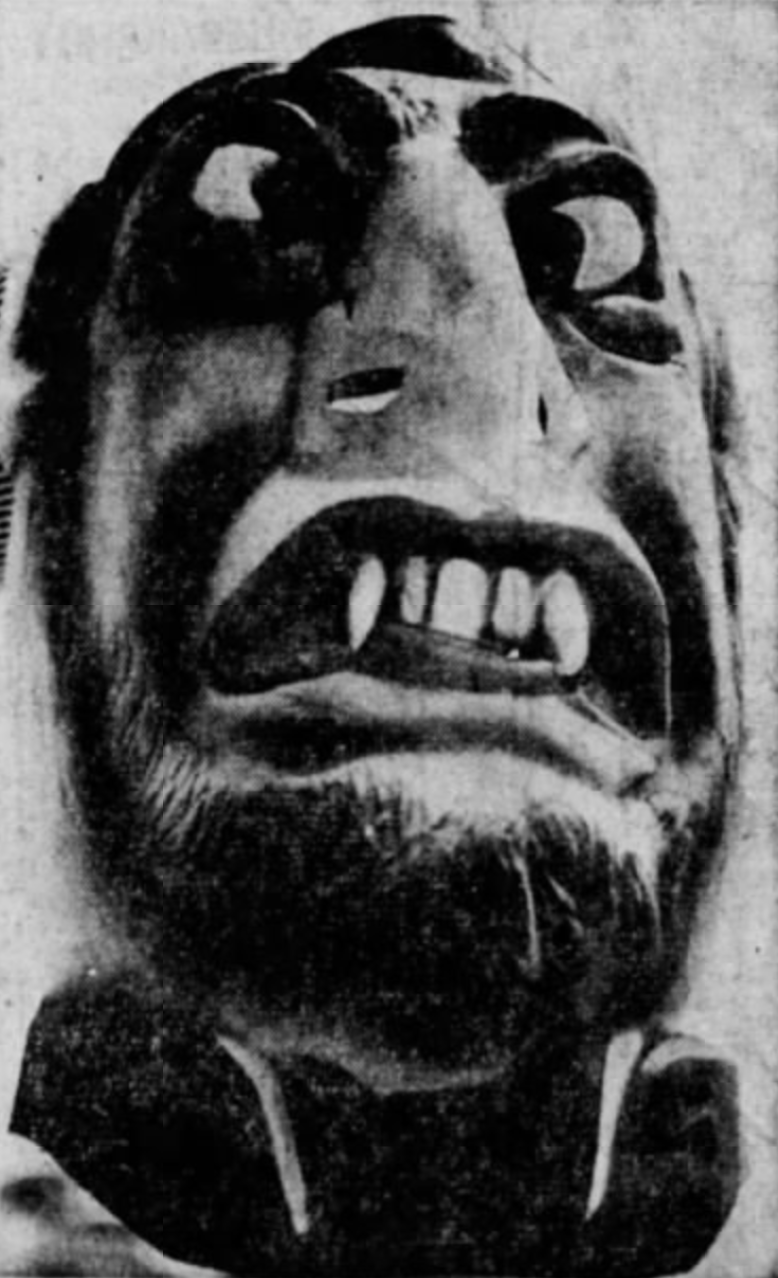 A scary mask used in the early years of Scream in the Dark. 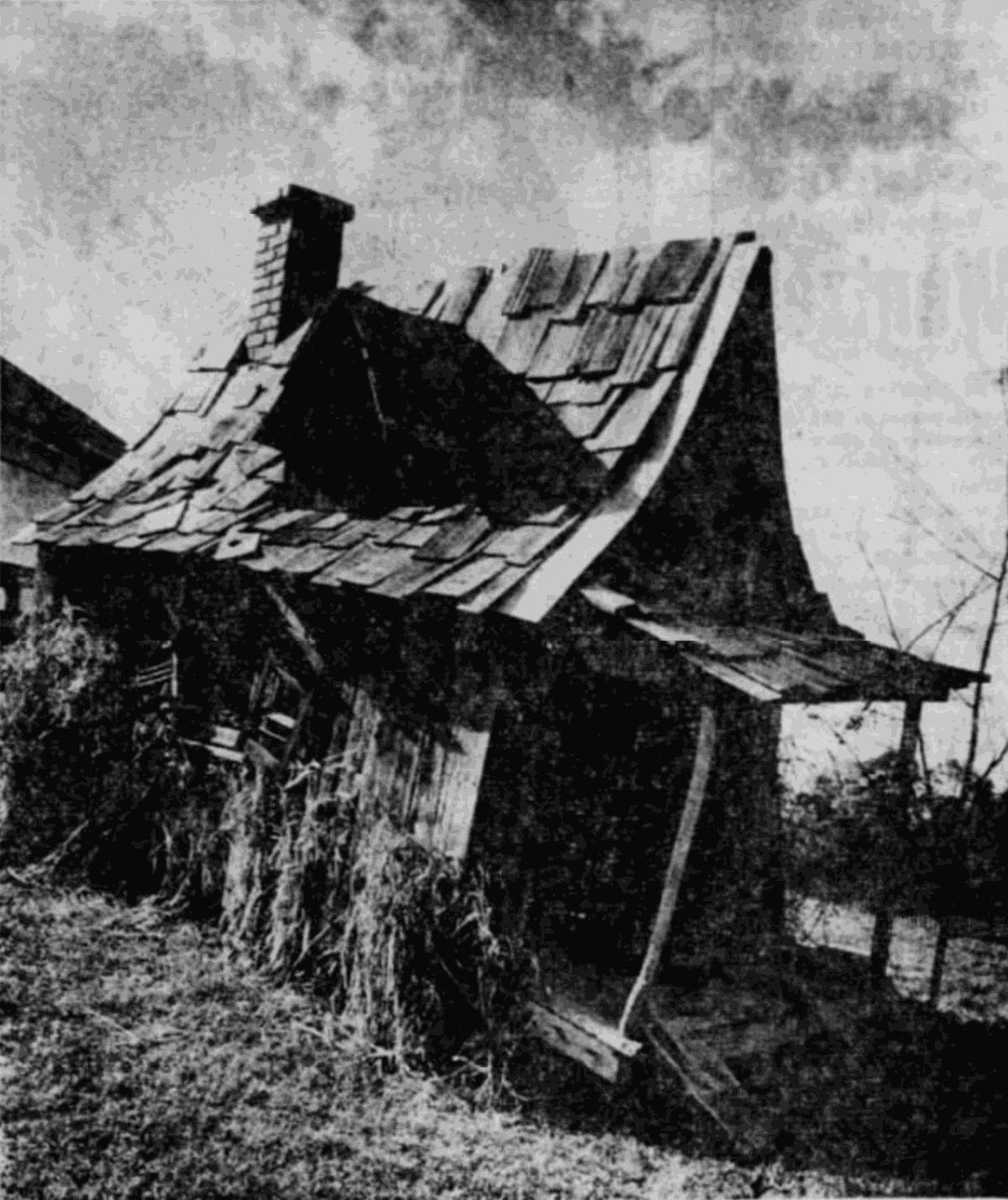 This miniature haunted house was used to promote Scream in the Dark in parades and at other events. 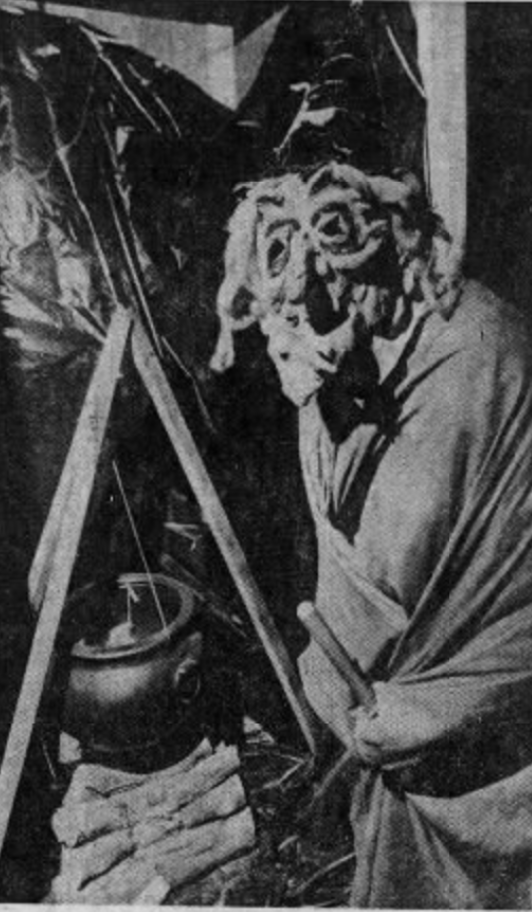 This witch was a character in the early years of Scream in the Dark.

The leaves are turning pretty colors. There's a crispness in the air that becomes a pleasant chill in the evenings. Everything tastes of pumpkin spice.

And thousands of screams echo from haunted attractions around Lancaster County.

Locals love their Halloween attractions, from historic ghost tours to massive horror attractions such as Jason's Woods and Field of Screams.

The granddaddy of Lancaster County Halloween attractions has gone the way of all things - into the hereafter - but the founders of both Jason's Woods and Field of Screams cite it as a formative influence on their own forays into scary entertainment.

We're talking about Scream in the Dark, a former haunted house on New Danville Pike that many locals still recall fondly this time of year.

Here are nine things you might not know - or might have forgotten - about Scream in the Dark.

Despite the ghouls, ghosts and other grim scenes, Scream in the Dark was owned, operated and served as a fund-raiser for Lancaster Youth for Christ, a non-denominational group that aimed to provide a "wholesome atmosphere for kids," according to YFC's Amos Esh.

A slideshow (later, a film) illustrating a Biblical message was played in the waiting area, but no religious message or imagery was presented within the attraction itself.

Though most locals who went to Scream in the Dark are quick to recall its location in a former barn at 1940 New Danville Pike, it began its life in an old mill on Route 999 just outside of Millersville. The attraction debuted in 1969, with a no-frills ad in the New Era touting a "hall of death," the chance to "feel a ghost," some "grotesque monsters," a "torture room" and, vaguely, "odor."

The New Danville Pike location consisted of farmland purchased in 1971 from Clayton Shenk. The farmhouse was used as an office for Youth for Christ, and the barn was used for the annual haunted attraction.

3. The attraction drew big crowds from the outset.

Even in its first year, as an unknown quantity in the days before viral marketing, Scream in the Dark drew 6,000 people for its initial six-day run. In year two, that figure more than doubled to 13,000. In the fifth year, 25,000 people were scared by the good-natured ghouls of Scream in the Dark.

4. The Scream in the Dark team built a tiny haunted house.

Perhaps in a grim foreshadowing of the tiny house trend, the Youth for Christ volunteer builders constructed a 6-by-10-foot miniature haunted house that was used to promote the attraction in county farm show parades and at other events.

5. Scream in the Dark wasn't just for locals.

Though the majority of visitors to this "professional ghost walk" (as it was billed in newspaper advertisements) were undoubtedly Lancaster County residents, groups traveled to Scream in the Dark from York, Lebanon and Chester counties, and Maryland, even in the attraction's early years. Later, the haunted house was publicized in Philadelphia newspapers, drawing crowds from that city, as well as New Jersey and even farther afield. 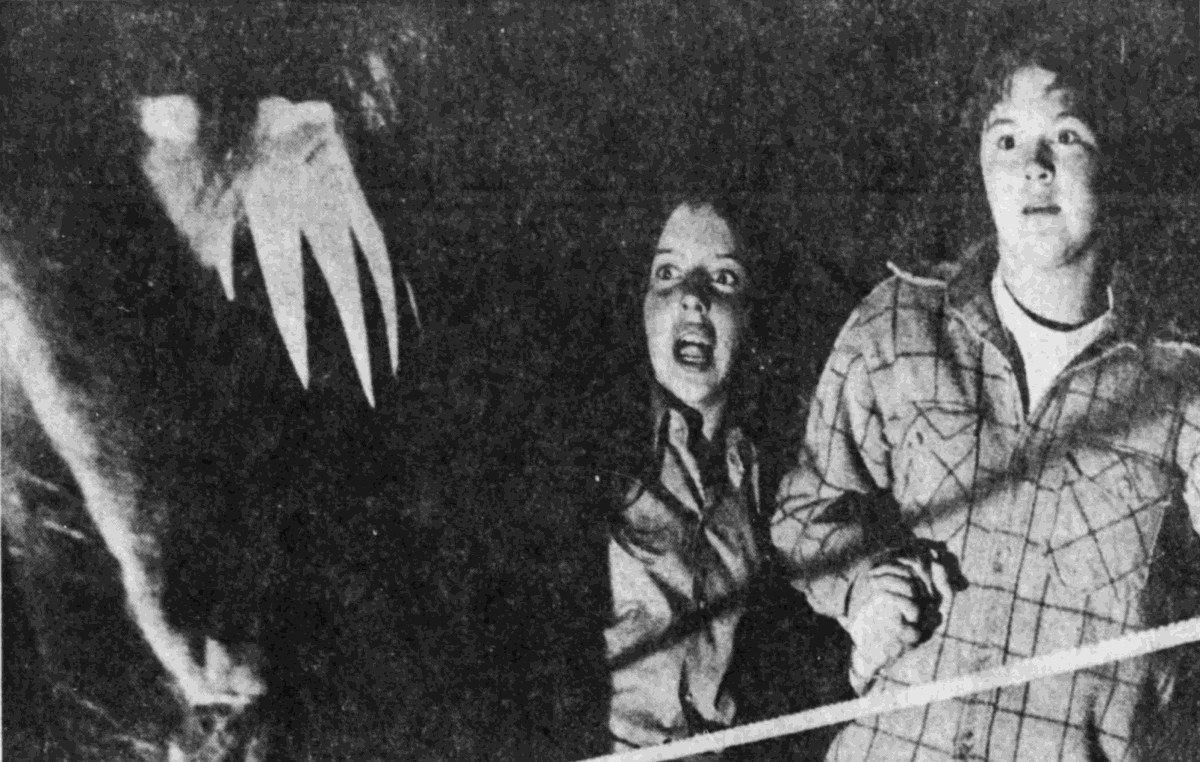 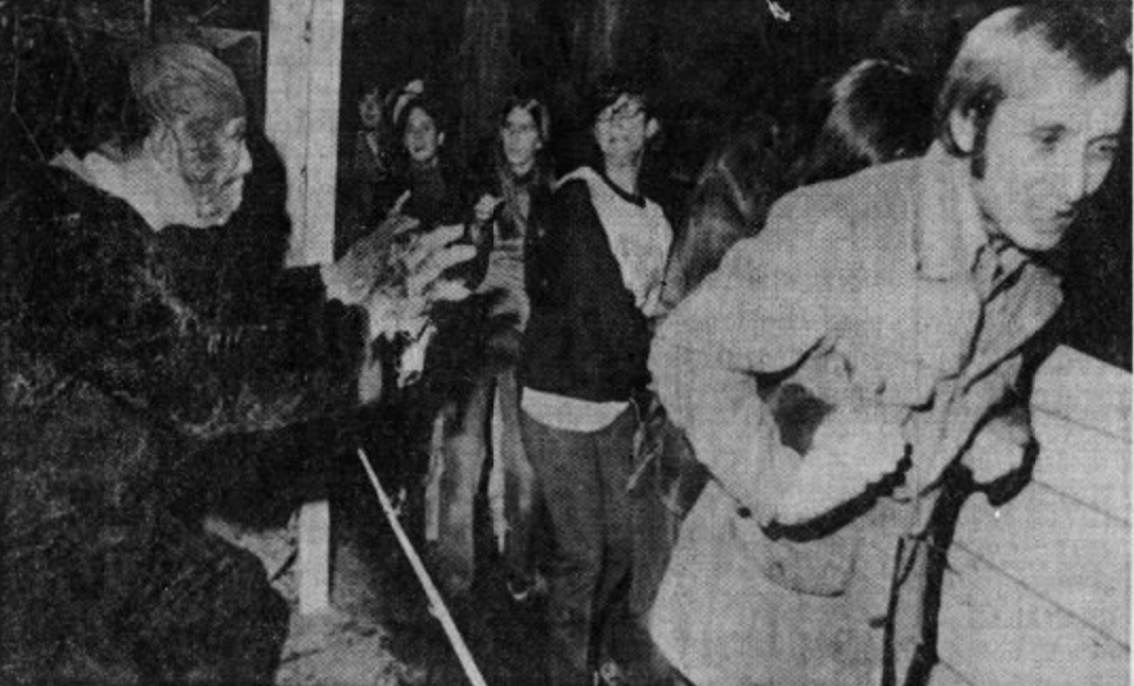 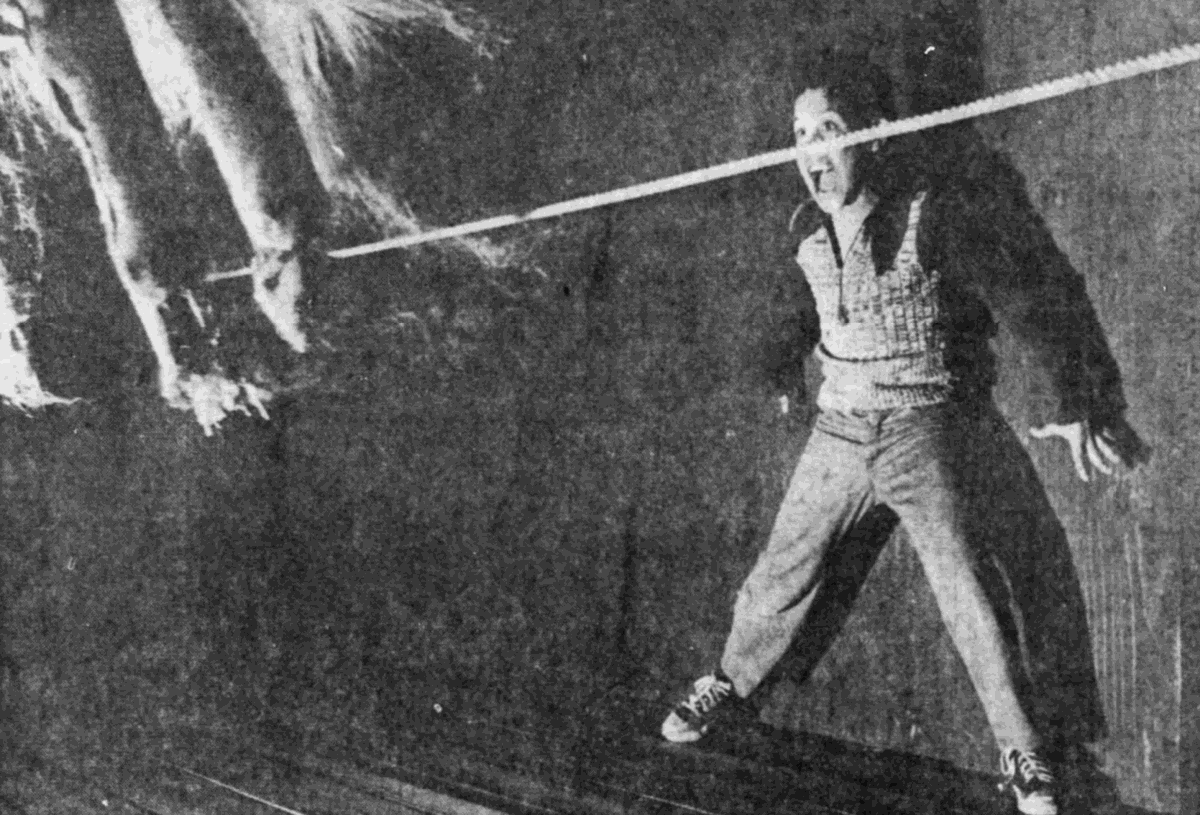 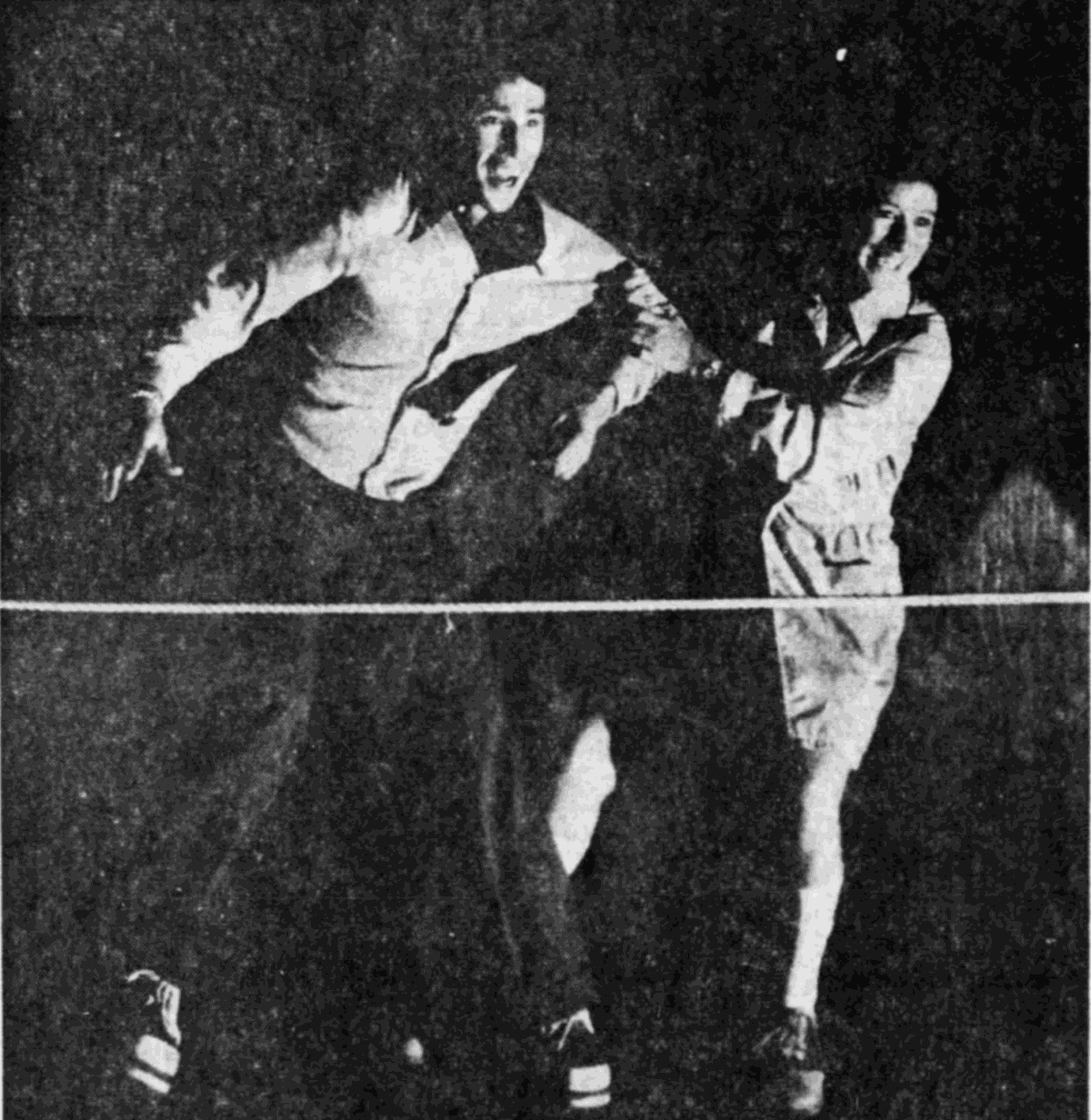 Victims of Scream in the Dark

6. A few people had their pictures taken while being terrified.

Years before such practices were commonplace at amusement parks around the world, newspaper photographers staked out spots inside Scream in the Dark to snap photos of unsuspecting guests. See the results in the above slideshow.

7. The layout of the house changed from year to year.

Though certain elements were perennial favorites - the black-and-white room, painted with patterns designed to disorient; Mr. ManyLegs the giant spider, designed for the perfect jump-scare - the overall layout and theming of the attraction varied over the years. With more than 20 rooms in the attraction, Scream in the Dark generally took visitors about an hour to experience - that's before the attraction expanded in 1975 to include smaller outbuildings in addition to the main barn.

Fears over the risk of fire (given that the attraction was hosted in an old barn and at least partially lit by kerosene lamp, perhaps a reasonable concern) led to letters to the editor and an inspection by fire officials during the 1974 season. The kerosene lighting was removed, but the attraction otherwise continued to operate.

After well over a decade of scaring locals and visitors alike, the attraction was closed for good in 1983. Over the previous years, an increasing number of problems with guests who were drunk and/or disorderly caused Youth for Christ officials to shut down Scream in the Dark, citing fears that visitors or volunteer staff might get hurt.

The Field of Screams hayride is creepier than ever.

What’s it take to become a cast member at Field of Screams haunted attraction? We found out [photos]

They do things a little differently in Mountville, PA, when the sun goes down.

What time is trick or treat night 2019 in Lancaster County?

Trick-or-treat night 2019 throughout Lancaster County will be on Halloween.

Expert says fear-inducing scares can be good for you

The season of goblins, ghouls and ghosts is upon us. And that means pop-up zombies in the neighbor’s yard, haunted corn mazes and horror film …

Lancaster County magician — former 'Mr. Halloween' — about to retire, but not quite disappear [column]

Where does a magician go when he disappears?