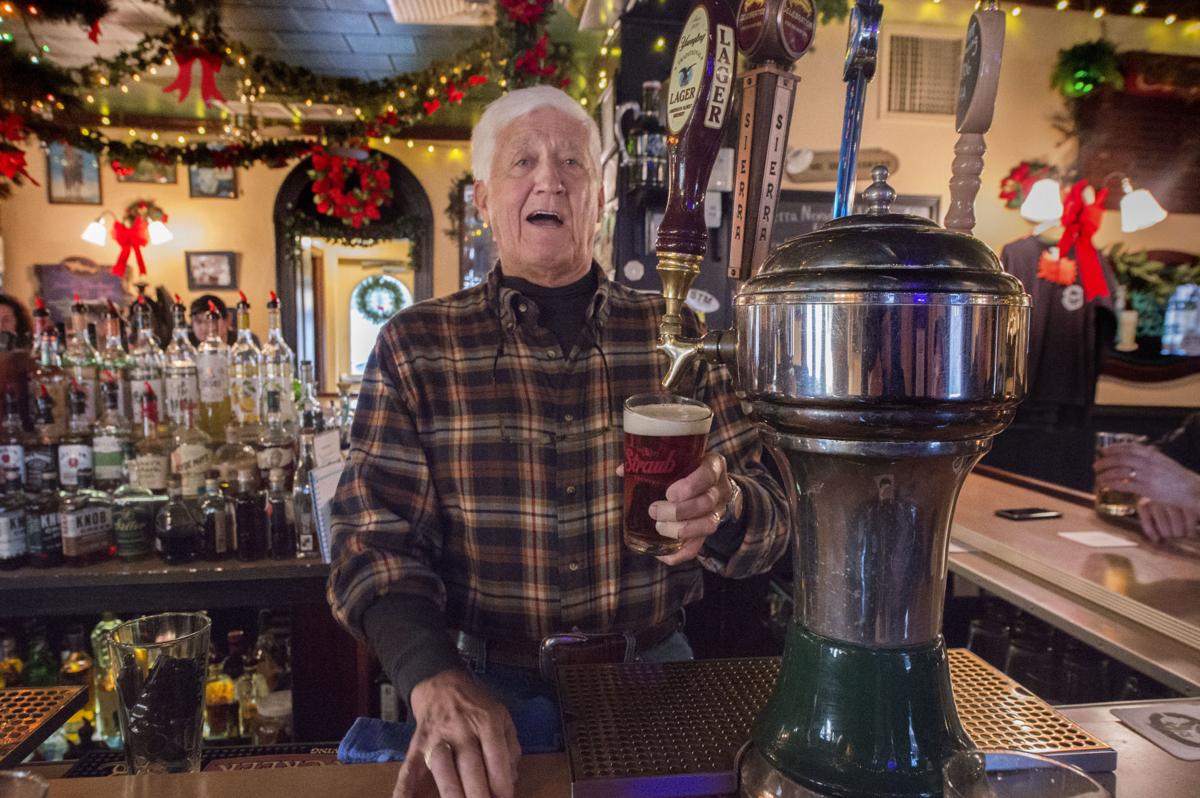 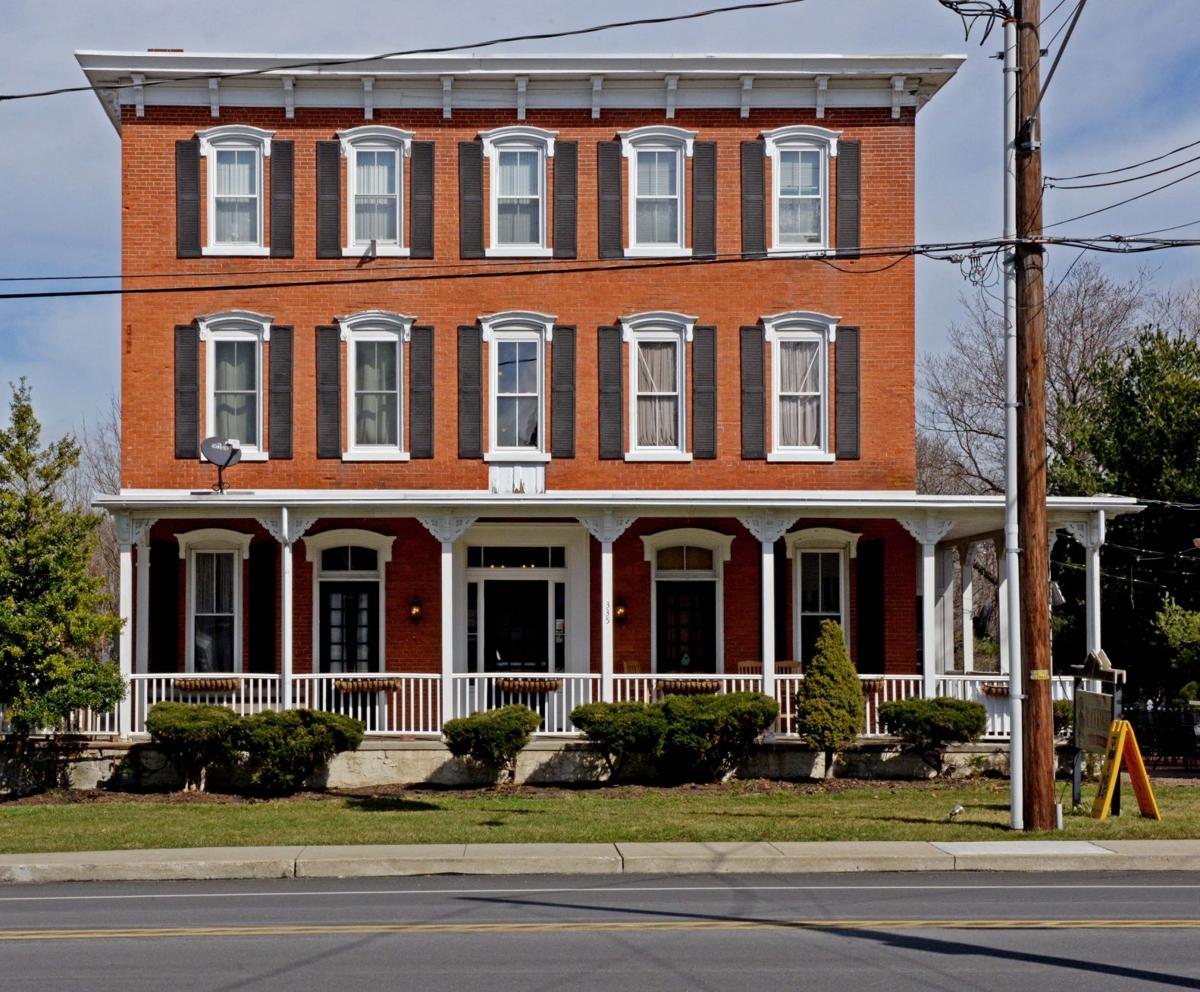 The Black Knights Tavern & Grill at 335 Main St. in Landisville is among the town's many stately buildings. 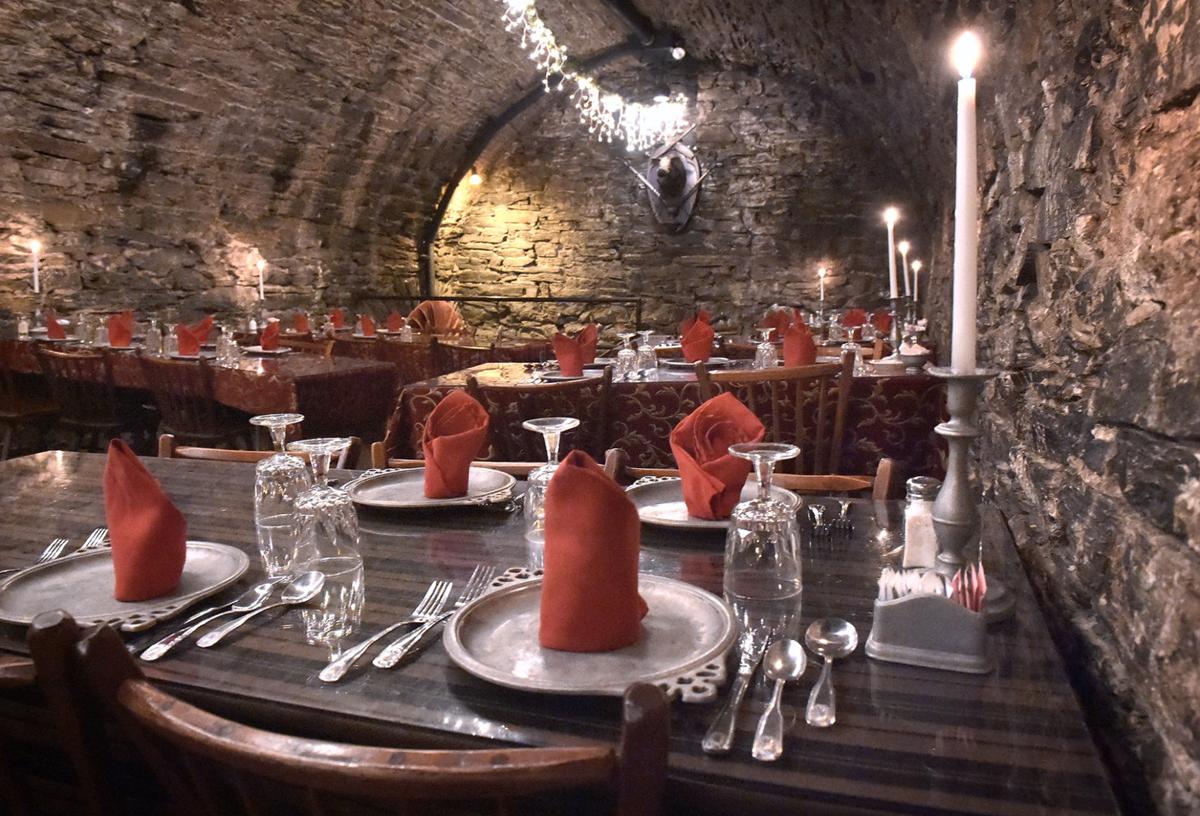 Dining area in the catacombs at Bube's. 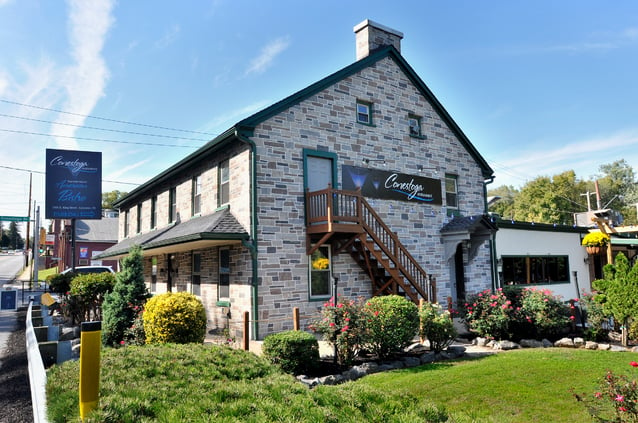 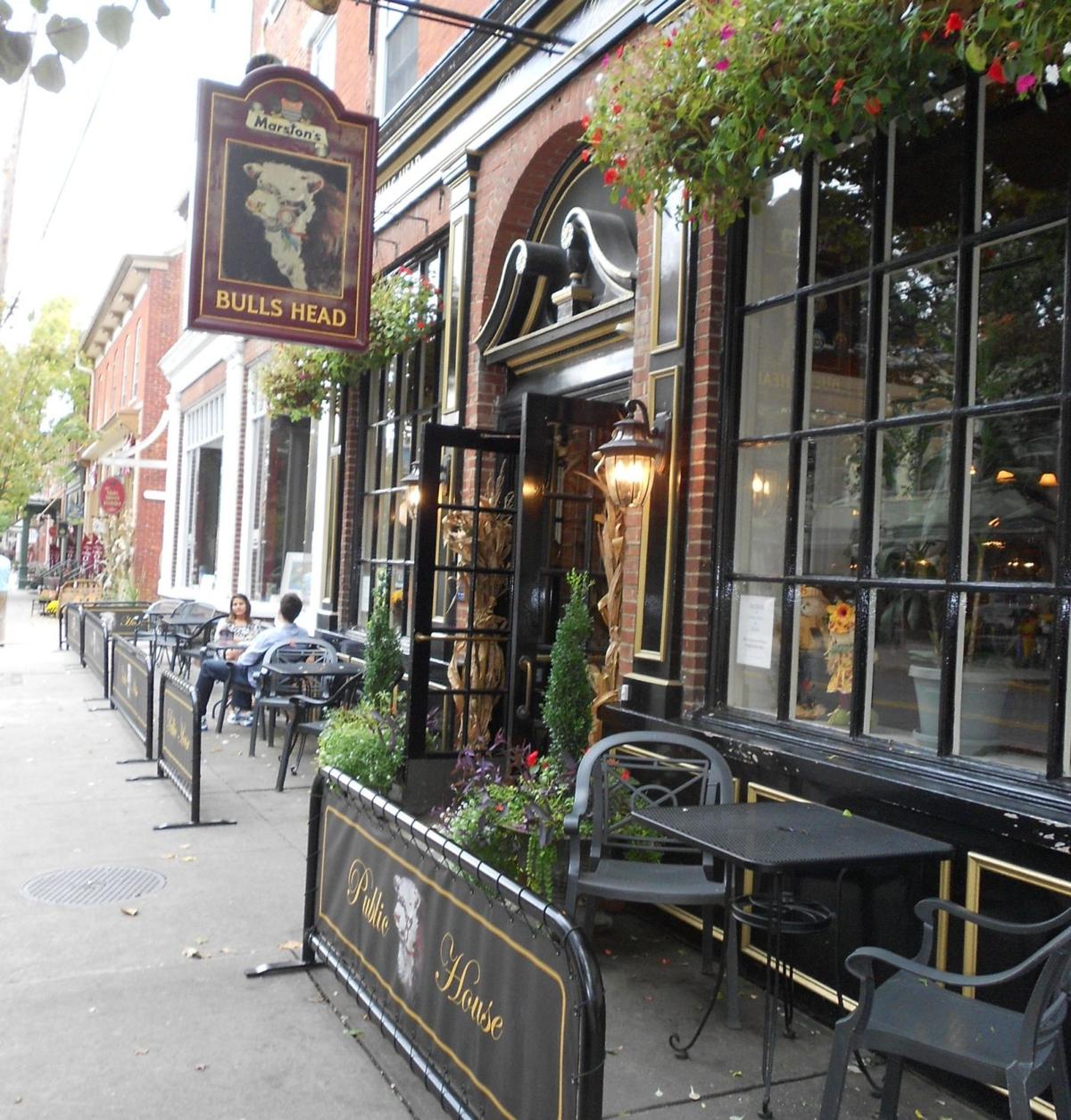 A shingle out front identifies the Bulls Head Public House, a British-style pub that is part of the General Sutter Inn in Lititz. 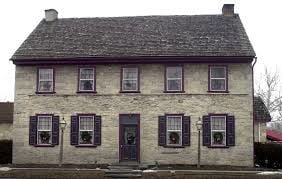 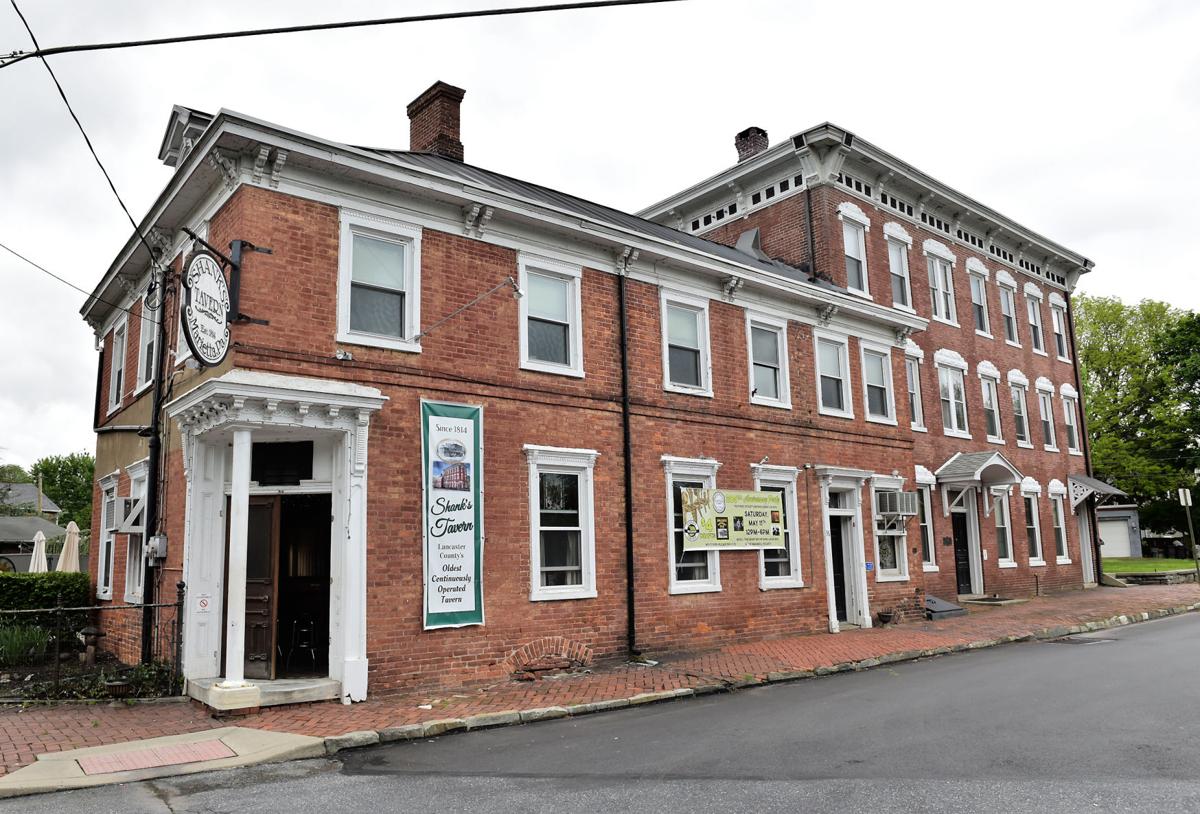 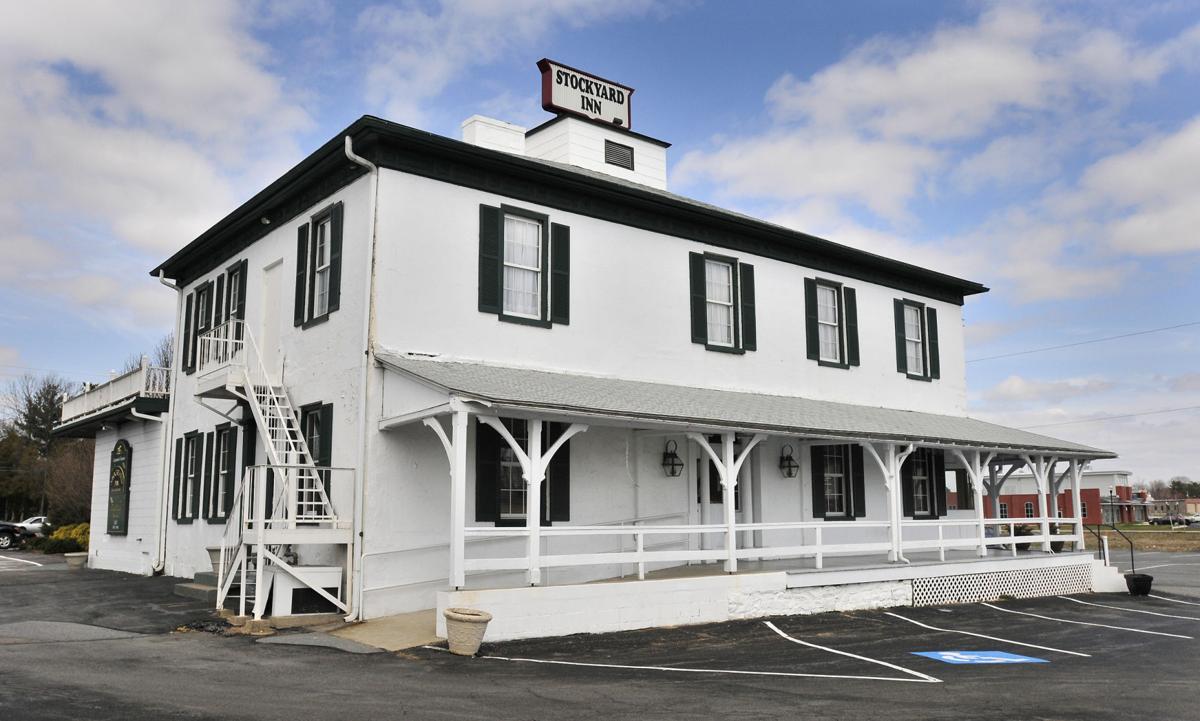 It's no secret that, in its earlier days, Lancaster County was a place where people liked to drink.

Indeed, like in most Colonial-era communities, alcohol was a part of everyday life for nearly everyone in Lancaster. At the time, many people considered water fit only for barnyard animals, while the fermentation process made alcohol "safe" to drink.

Taverns in that era were less like mere bars and more like community centers. And at the time of the American Revolution, there was one licensed tavern for every 90 men, women and children living in Lancaster city.

Sadly, today all of the 18th-century taverns in downtown Lancaster are gone. But venturing a bit further afield, you can find several local taverns (or, at least, restaurants that also serve alcohol) that have been in business in one form or another for more than 100 years.

We dug through the LNP archives to see how many we could identify. If you're looking to have a drink in a spot with plenty of local history, check out the list below - and if you know of any we've missed, let us know in the comments!

Building originally was: A hotel, located along the then-busy Old Harrisburg Turnpike.

Historical notes: For many years, this was the site of Gatsby's on Main, before becoming the Black Knights in 2005.

One thing you should know: As is the case with many old buildings, local lore has it that the Black Knights is haunted. There are at least two ghosts that have purportedly been spotted on the premises.

Historical notes: Between the brewery, the catacombs beneath it (which are the site of various themed feasts throughout the year), the adjoining hotel and the beer garden, there's enough history here to fill several books. Be sure to check out the ornate Victorian decor of the Alois room, featuring the hotel's original oak bar.

One thing you should know: The Central Hotel at Bube's had the first flush toilet in Mount Joy (!).

Circa-1725 Witmer Tavern in East Lampeter Twp. is under renovation after years of neglect

Building originally was: An inn.

Historical notes: Historically known as the Conestoga Inn, the current name was adopted upon reopening after a flood and subsequent fire shuttered the business for more than a year in 2011-2012.

One thing you should know: The patio, which seats more than 150 and overlooks the Conestoga River, is a popular spot on summer evenings.

Building originally was: An inn, called the Zum Anker (sign of the anchor).

Historical notes: The Zum Anker eventually became the Lititz Springs Hotel, then in 1930 it was renamed The General Sutter Inn after John Augustus Sutter, a California gold rush pioneer who lived his final years in Lititz and is buried in the Moravian Cemetery.

One thing you should know: If you're a beer fan, the attached Bulls Head Pub is a must-visit spot - it's even been named the best beer bar in America.

Building originally was: A "stage tavern," or inn catering to stagecoach travelers along the turnpike connecting Lancaster with Philadelphia.

Historical notes: The building was at one time owned by Lancaster's own President James Buchanan.

One thing you should know: The building became a parsonage for Buchanan's brother, the Rev. Edward Buchanan. the Rev. Buchanan's wife, Eliza Foster Buchanan, was sister to musician Stephen Foster, who wrote some of his immortal songs - including "Oh, Susannah!", at the property on the banks of Pequea Creek.

Building originally was: The Square and Compass Tavern.

Historical notes: Shank's is the oldest continuously operating tavern in Lancaster County. Even during Prohibition, its then-owners operated the bar as a speakeasy. And while many aspects of the bar's interior are unchanged over the centuries - the wainscoting, tile floor and fireplace are all original - one concession to the modern era was made: A wall separating the "ladies area" from the main bar was knocked down in 1954.

One thing you should know: Bob Shank, whose family has owned the bar since 1933, is proud to have been at the forefront of at least two culinary trends: Shank's was the unlikely starting point for Taco Night and sushi in Lancaster County. The former began in 1968, when Shank returned from California with a desire to bring Mexican food with him; and the latter started in the '80s, inspired by Shank's frequent trips to the Fell's Point neighborhood in Baltimore.

Building originally was: A farmhouse. It's also the second venue on this list to have been owned by President James Buchanan.

Historical notes: In 1895, with the adjacent farmland having become the largest stockyards east of Chicago, the massive, stately farmhouse was converted to an inn that served the visiting cattlemen.

One thing you should know: In 1952, the Stockyard inn was bought by James Fournaris, whose family still owns it today. Fournaris worked to reinvent the venue as an upscale steakhouse.

19 can't miss summer food festivals in and near Lancaster County

(Editor’s note: This story was updated to include comments from Comcast)

Lancaster That Was: In 1994, newsman Nelson Sears retires after 45 years with WGAL

Here's a look at the most-read stories on LancasterOnline.com between June 24 and June 30.

If the book title “Bosom Friends: The Intimate World of James Buchanan and William Rufus King” makes you think you’ll get a definitive ruling …

In a little patch of Gap designated as the Rising Sun Historic District, a steady breeze sent waves through a field of weedy blossoms alive wi…

Lancaster That Was: Campers celebrated YMCA's Camp Shand purchase in 1994