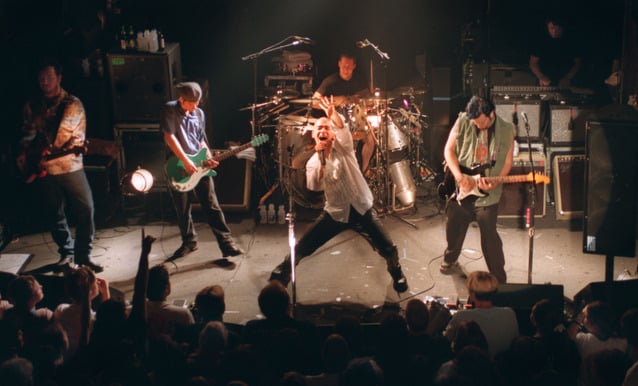 Live performs during the opening of a three-night run at the Chameleon Club in this 1998 file photo. 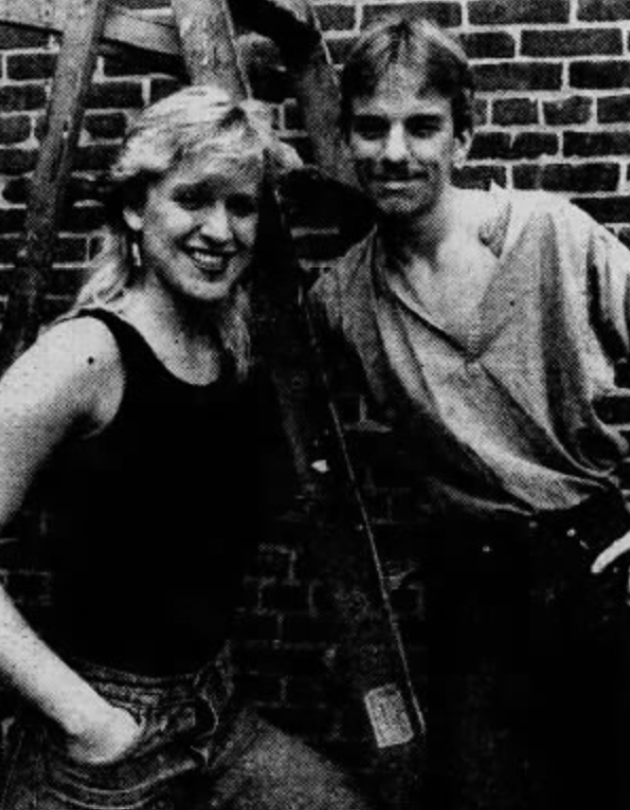 Rich Ruoff and Alexandra Brown opened the Chameleon Club in 1985 in the back room of Tom Paine's restaurant in downtown Lancaster. 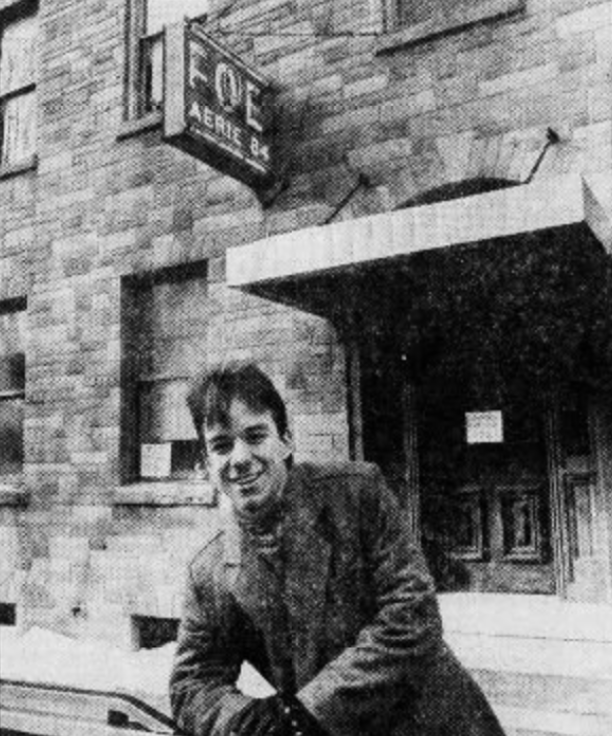 Rich Ruoff poses outside the Fraternal Order of Eagles headquarters, which would soon become the new home of the Chameleon, in January 1988. 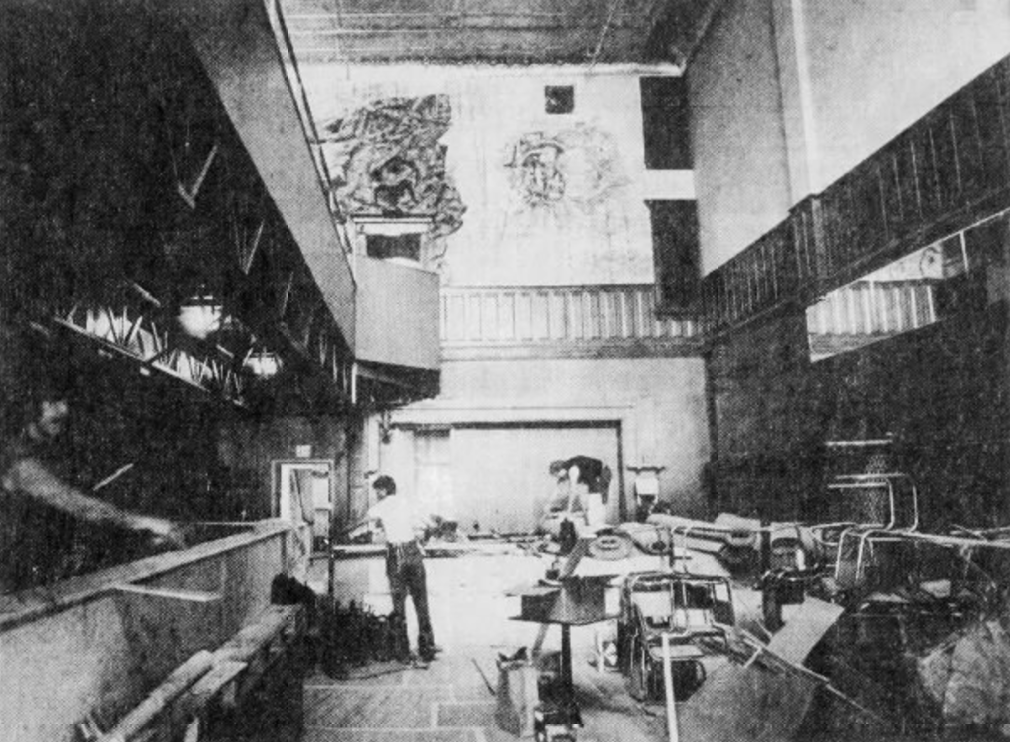 The Chameleon Club's main room in seen under construction in this 1988 photo. 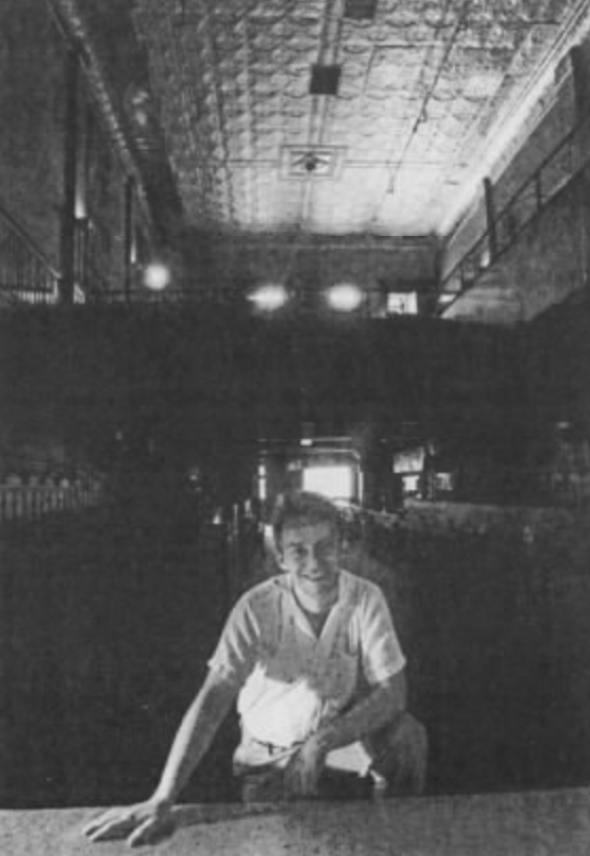 Rich Ruoff poses inside the Chameleon Club in June 1989, at the time of the Water Street venue's one-year anniversary. 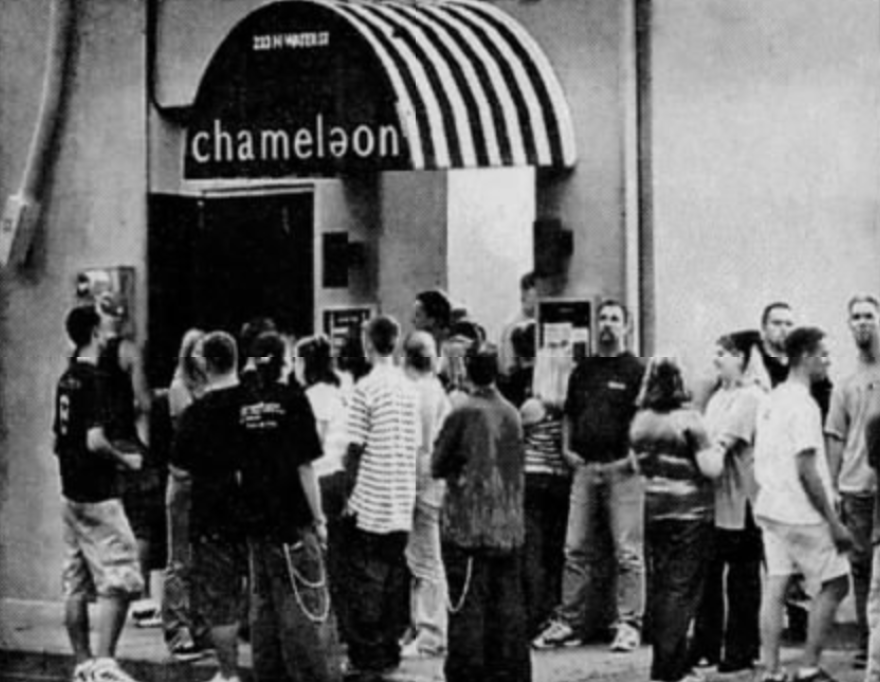 A crowd waits to get into the Chameleon's Water Street entrance, circa early 2000s. 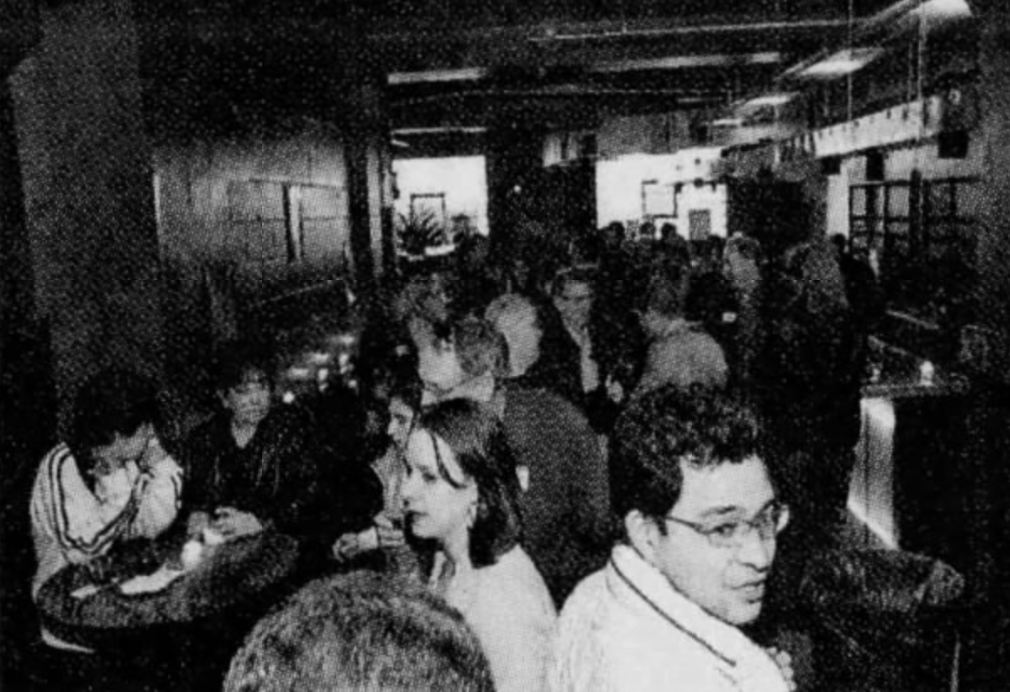 The crowd at the Chameleon Club's re-opening in March 2008, after an extensive $2 million renovation and expansion. 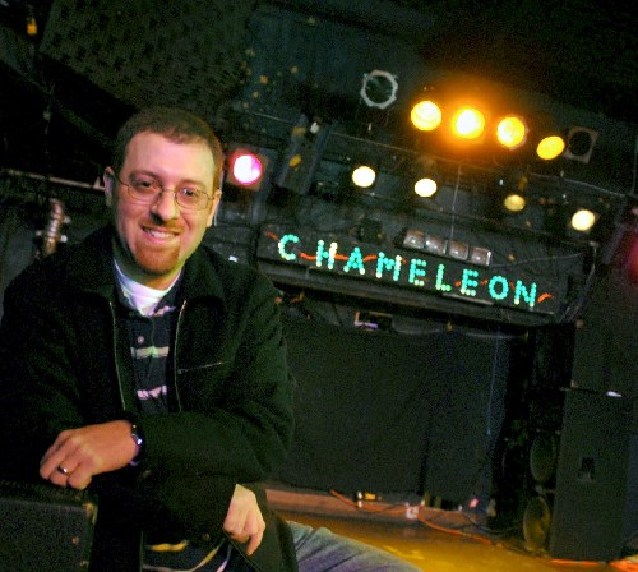 Chameleon Club owner Nick Skiadas is shown on the stage of the North Water Street concert venue in 2007. 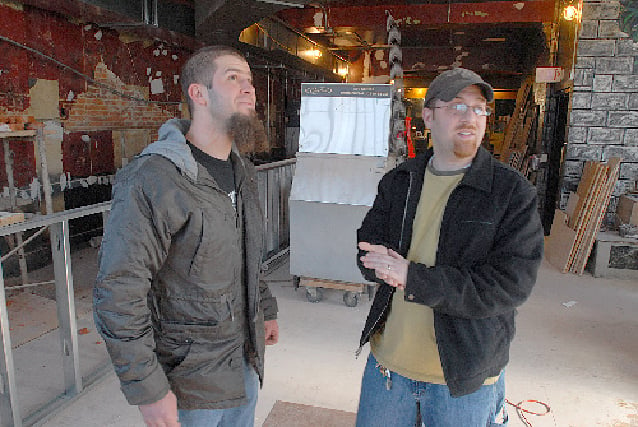 Manager Gregg Barley, left, and owner Nick Skiadas check on the progress of remodeling work at the Chameleon Club in February 2008. 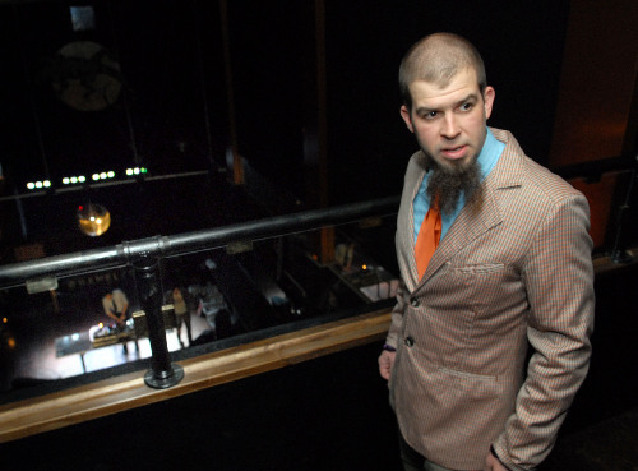 For decades, the Chameleon Club has been at the heart of the music scene in Lancaster and throughout Central Pennsylvania.

With the news that the longstanding nightclub on Water Street would be closing its doors - forever at that location, but with the hope of opening somewhere else, sometime in the future - we thought we'd take a look at the history of the Chameleon through the lens of the LNP | LancasterOnline archives.

What are your favorite Chameleon Club memories? Let us know [survey]

Years before moving into the Water Street address which it has occupied ever since, the Chameleon was tucked into the back room of the former Tom Paine's restaurant, with an alleyway entrance off Christian Street.

The first newspaper story about the club appeared on the back page of the Intelligencer Journal on June 3, 1985.

The story described a young entrepreneur, 23-year-old Rich Ruoff, who had set his eyes on the space behind the popular eatery as a potential live-music hotspot. (The room had operated as a nightclub before - Club 317 - but had been vacant for several months.)

Ruoff, along with his then-girlfriend Alexandra Brown, 18, had approached Tom Paine's owner Ben King about running a club in the restaurant's back room. King was on board with the idea, and the Chameleon was born.

The first show was set for June 15 and featured AWOL, a local band that included two former members of the much-loved Speedboys. The official grand opening event, however, would take place about a week later, when the Memphis Motown Review, a 10-piece band from Philadelphia, would play there on June 21.

At the time of its debut, the Chameleon was planning to be open Wednesday through Saturday, with live music every night. Wednesday was designated as jazz night, with the rest of the week featuring blues, R&B and rock bands. At the outset, the club was aimed at an older audience: Brown said specifically that punk and heavy metal were not on the agenda.

Eventually, of course, the Chameleon became an epicenter of Lancaster County's all-ages shows, and featured a lengthy list of local and touring punk and metal bands.

It didn't take long to make that switch - to mark his club's one-year anniversary, Ruoff took out a large ad in local newspapers to thank the community for supporting the Chameleon and to tout the venue's remarkable first year. More than 85 bands performed there that year, and thrash and punk were both on the list of styles the club featured.

The diversity of musical styles at his club was a point of pride for Ruoff, as was a desire to set the Chameleon apart from the mainstream. Another early Chameleon ad featured a large maze, with explanatory text that read like an impassioned manifesto:

"Below is a maze of Top 40, disco and heavy metal, hotel lounge acts and boring clubs, elevator and dentist office music, and just plain bad bands. The goal of the game is to cut through the plastic, the glitz, the phoniness, the MTV and the teeny bopper pop and work your way to Chameleon. ..."

Eclecticism aside, blues was a genre close to Ruoff's heart from the outset. In February 1987, the Chameleon hosted its first Blues Festival, featuring a bill of four blues bands: Blue Falcons, Steamin' Jimmies, Moses Rascoe, and the Middleton Brothers.

The Blues Festival became a long-running annual tradition at Chameleon, and eventually morphed into the massive, multi-venue Lancaster Roots and Blues Festival.

By this time, the Chameleon had gotten too big for the back room at Tom Paine's restaurant. And on Jan. 15, 1988, local newspapers announced the future home of the Chameleon.

Ruoff, with investment backing from his parents, Ed and Ingrid Ruoff, would be moving the nightclub to a spot that had served as the Fraternal Order of Eagles social club for 85 years. (The Chameleon's original home would soon become the Uptown Comedy Club.)

Though the FOE club used 224 N. Prince St. as its address and main entrance, the Chameleon would turn that around, using the Water Street side of the property for the public, while loading bands and equipment from the Prince Street side.

The new venue was a massive upgrade in terms of space, with a capacity of about 400 spectators, a large parquet dance floor and a wrap-around mezzanine/balcony overlooking the stage.

Chameleon Club, a mainstay in Lancaster city for nearly 30 years, to close its doors and relocate

Wednesday, Friday and Saturday were to be the club's typical nights open, with occasional all-ages shows on Sunday and touring bands on other days of the week as tour schedules required.

The $350,000 interior renovation kept some original elements of the building - such as the pressed-tin ceiling, which was exposed and polished up, and the oak wainscoting around the main room - and also made some drastic changes, such as cutting away a large chunk of the second floor to create that distinctive balcony and adding raised seating on the main floor and multiple bars throughout the space.

A 70-seat restaurant area in the basement was also expected to be open to patrons during shows, though it wouldn't be serving full meals - yet.

Before the end of 1988, however, that restaurant space would be up and running as the Chameleon Cafe, managed by Ingrid Ruoff. Featuring a menu of appetizers, sandwiches and and snacks with music-themed names, the restaurant was featured in the Sunday News food section shortly after opening. (The concept didn't last: The Chameleon Cafe closed its doors after about six months.)

As the Chameleon's first year in its Water Street home wore on, the club's future role in the city's nightlife scene grew ever more firmly established.

In April, legendary punk band The Ramones played a legendary show there.

And by June, the Chameleon had been on Water Street for a year - it was time for another first anniversary to be marked in the local papers.

This time, it wasn't in the form of a letter from Ruoff run as an ad - it was a Sunday News entertainment section centerpiece, in which he spoke at length about the successes and difficulties of his first year running the new club.

The next year, another significant change came to the Chameleon, as the basement space which had briefly been the Chameleon Cafe - and then subsequently a quieter hangout spot during upstairs shows - was reinvented as a "second stage" for the Chameleon called the Lizard Lounge.

As the '80s turned to the '90s, the Chameleon had truly become one of the centerpieces of Central Pennsylvania's live music scene. Touring bands that ordinarily wouldn't play in a city the size of Lancaster would make the Chameleon a stop, usually between dates in New York, Philadelphia or Baltimore.

In May 1993, though, Ruoff first publicly expressed interest in selling the club.

He had landed on the asking price of $950,000 for the complete package, which included the building, the sound and lighting systems and the liquor license. However, he said, he was in no hurry to sell, asserting that he was prepared to stay for several more years if a sale was not imminent.

Two years later, Ruoff was still running the Chameleon, and the club was celebrating its 10-year anniversary.

The entire month of June 1995 was essentially one big celebration, with live shows nearly every night. Performers included club regulars like Burning Bus, Brave Combo and Tommy Conwell, as well as national acts such as Joan Osbourne and Richard Thompson.

There were also, of course, local bands that went on to national acclaim, with The Ocean Blue, The Innocence Mission and Suddenly, Tammy! each headlining a night.

Perhaps unsurprisingly, the whole thing kicked off with a blues show featuring Queen Bee and the Blue Hornets.

The Chameleon kept chugging along into the new millennium, until - nearly 10 years after he first put it up for sale - Ruoff sold the club to a group of local investors.

Jim Albright, owner of Albright Opticians, and Adam and Gretchen Clark, owners of web design firm Trick Digital, were to be co-owners of the nightclub. Ruoff said he had agreed to stay on as a consultant for up to a year in order to ease the transition process.

But in a little more than a year, in September 2003, the club was sold again - at least in part.

Nick Skiadas, former owner of the Blue Star Hotel, and his wife Holly, music director and co-host at WLAN FM-97, purchased the majority ownership of the club from the Clarks. Albright continued to hold a minority stake in the business, as did an unnamed silent partner.

In 2008, Skiadas and the club's manager, Gregg Barley, undertook the first top-to-bottom renovation the Chameleon had seen in its 20 years at Water Street.

The $2 million project was intended to attract more nationally popular performers to the Chameleon stage - "to get artists with radio hits," as Skiadas said.

The mezzanine/balcony was rebuilt into two levels, the stage was enlarged, all new sound and lighting systems were installed, the main floor was reconfigured to allow larger crowds and the club's entrance was expanded to include a new lobby area.

The remodeling effort, Barley and Skiadas said, was meant to keep the feel of the old Chameleon Club - which had by that point hosted more than 4,000 bands - while bringing the technology and audience experience "to the next level."

The club's grand re-opening show on March 6, 2008, featured one of those national acts with radio hits that Skiadas spoke of - Illinois hard-rock group Chevelle, whose second album, "Wonder What's Next," spawned a couple of radio-friendly tracks in 2002 and 2003.

With that 2008 renovation, the Chameleon's Water Street location had reached its final form.

The club continued to be a vital part of Lancaster's nightlife scene right up until the COVID-19 pandemic forced it into a temporary closure, along with most of the rest of the nation's live music venues.

That temporary closure became permanent when, on Sept. 5, Brandon Gepfer, who has been the club's talent buyer and production manager since 2016, announced that the Chameleon was closing its doors at Water Street permanently.

Gepfer also said that Skiadas is looking for a new location for the club, with tentative hopes of opening in 2021.

Where that location will be - or, indeed, if it will be in Lancaster city at all - remains to be seen.