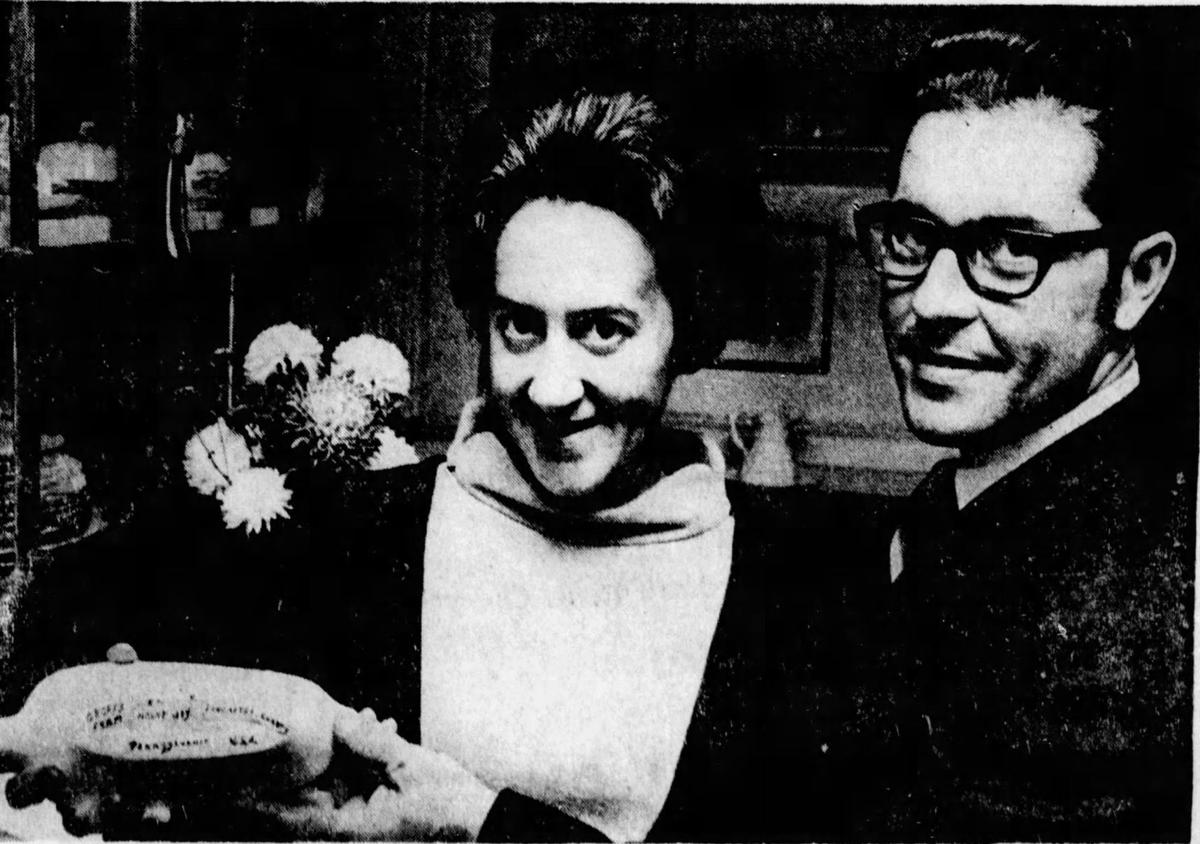 Mr. and Mrs. Abram Groff show one of 20 ceramic plates intended as gifts for visiting Russian cosmonauts at a planned dinner in November 1969. The dinner was canceled at the last minute. 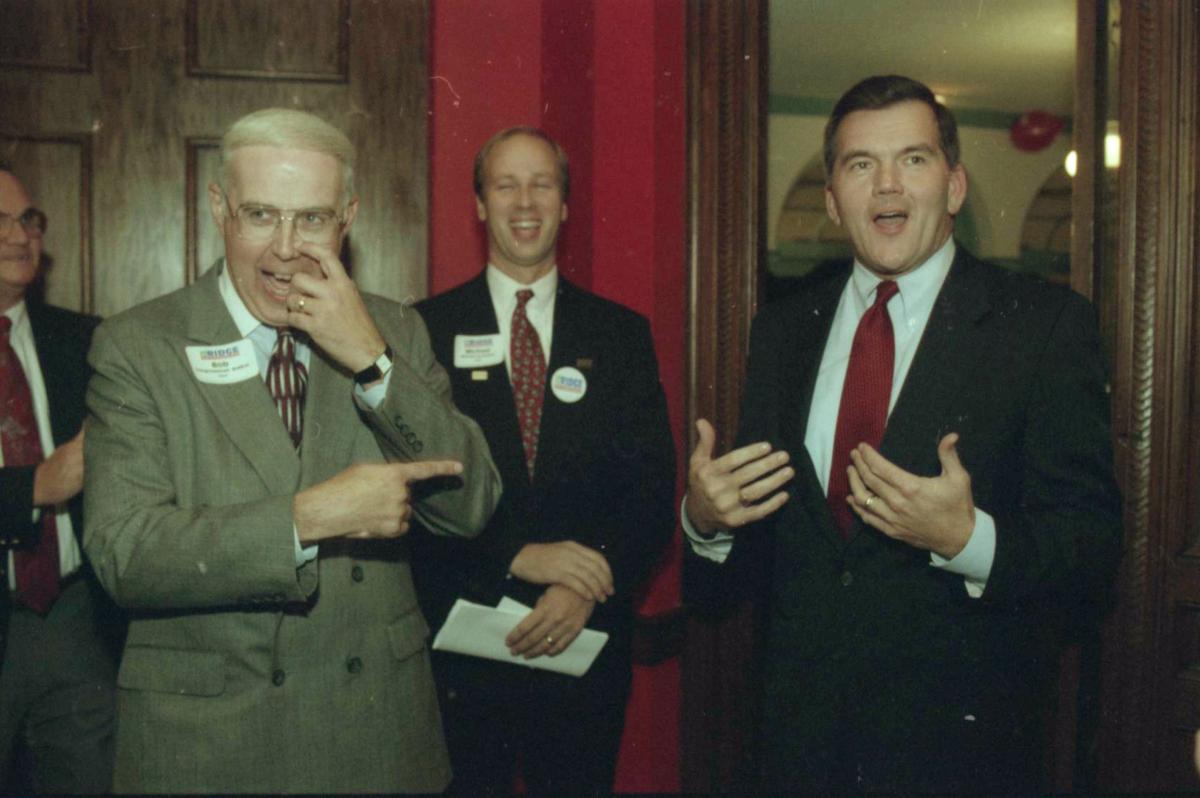 Congressman Tom Ridge, left, and fellow Republican Congressman Bob Walker share a joke. At rear is Michael Brubaker, a host for the Nov. 3, 1994, fundraiser for Ridge in Lancaster County.

Mr. and Mrs. Abram Groff show one of 20 ceramic plates intended as gifts for visiting Russian cosmonauts at a planned dinner in November 1969. The dinner was canceled at the last minute.

Congressman Tom Ridge, left, and fellow Republican Congressman Bob Walker share a joke. At rear is Michael Brubaker, a host for the Nov. 3, 1994, fundraiser for Ridge in Lancaster County.

25 Years Ago: Polls had Congressman Tom Ridge “surging ahead” against Mark Singel in the race for Governor of Pennsylvania. Ridge was not slowing down, outlining the work yet to be done in a fundraiser with Republican supporters. He stood tough on crime and focused on work as a part of welfare. He also called for removing barriers to energy development. The Nov. 3, 1994, New Era covered Ridge’s campaign stop in Lancaster County.

The same edition included a feature on Eileen France, who served on the Lancaster Day Care Board – but her service didn’t stop after the meetings. France’s living room was stuffed with items collected for the Day Care Board's seventh annual Night on the Town Silent and Live Auction. In addition to housing a huge number of contributions, France made several items herself. Among her creations: a painting, floral items and wreaths.

50 Years Ago: The Nov. 3, 1969, Intelligencer Journal reported on developments with Armstrong Cork Co. and the Kerr Glass Factory. About 2,700 workers from both industrial plants were set to go back to work with new contracts. Employees would make an average of 17 cents per hour more, among other improvements. The two-year contract was not without opposition. Votes were close, with a “cliffhanger” at Armstrong.

In the same edition, Mrs. Abram Groff of Groff’s Farms had planned a wonderful dinner party, but the guests of honor would not be coming. Mrs. Groff planned the dinner for returning Russian cosmonauts George Beregovoy and Kanstatine Feokotistov. The men were slated to arrive after a visit to Hershey. That visit was cancelled.

National Headline: Green Acres Arnold may get his own show

Check out the Intelligencer Journal front page from Nov. 3, 1969.

75 Years Ago: Firefighters from three companies converged on a large frame garage in owned by Edwin Roth in Fivepointville. Flames were fed by stores of gasoline and farm equipment in the garage itself. The garage and its contents were a total loss, but firefighters were able to save the attached home and other structures. The cause of the blaze was thought to be faulty wiring in the garage. The Nov. 3, 1944, Intelligencer Journal had the story.

The same edition reported that a new store was opening downtown. Bernard’s would take the former Walgreen’s space at the southeast corner of Green and Orange streets. Renovations were nearly completed and Herman Kline was named manager. The store carried women’s “dress goods,” curtains, linens, domestics and some home furnishings.

Check out the Intelligencer Journal front page from Nov. 3, 1944.

Check out these Avon perfume bottles and learn what they're worth in this week's episode of 'What's It Worth? with Dr. Lori'

100 Years Ago: The Storb-Snader Company greatly expanded the New Holland Silk Mill. The company added new buildings and a shipment of forty looms was received on the property. Sixty more looms would arrive when the new buildings were completed. Storb-Snader anticipated the need to hire a large number of workers for the expanded operations. The Nov. 3, 1919, New Era had the story.

Also in that edition: Fourteen people were killed in a grade-crossing accident in New Jersey. A Pennsylvania Railroad train struck an auto truck loaded with 32 “masqueraders.” John J. Sandoe, former Lancastrian and soldier, was among the dead. Thirteen people were seriously injured, and it was feared that as many as 10 would not survive. The 32 were returning home from a Halloween party in Billingsport.