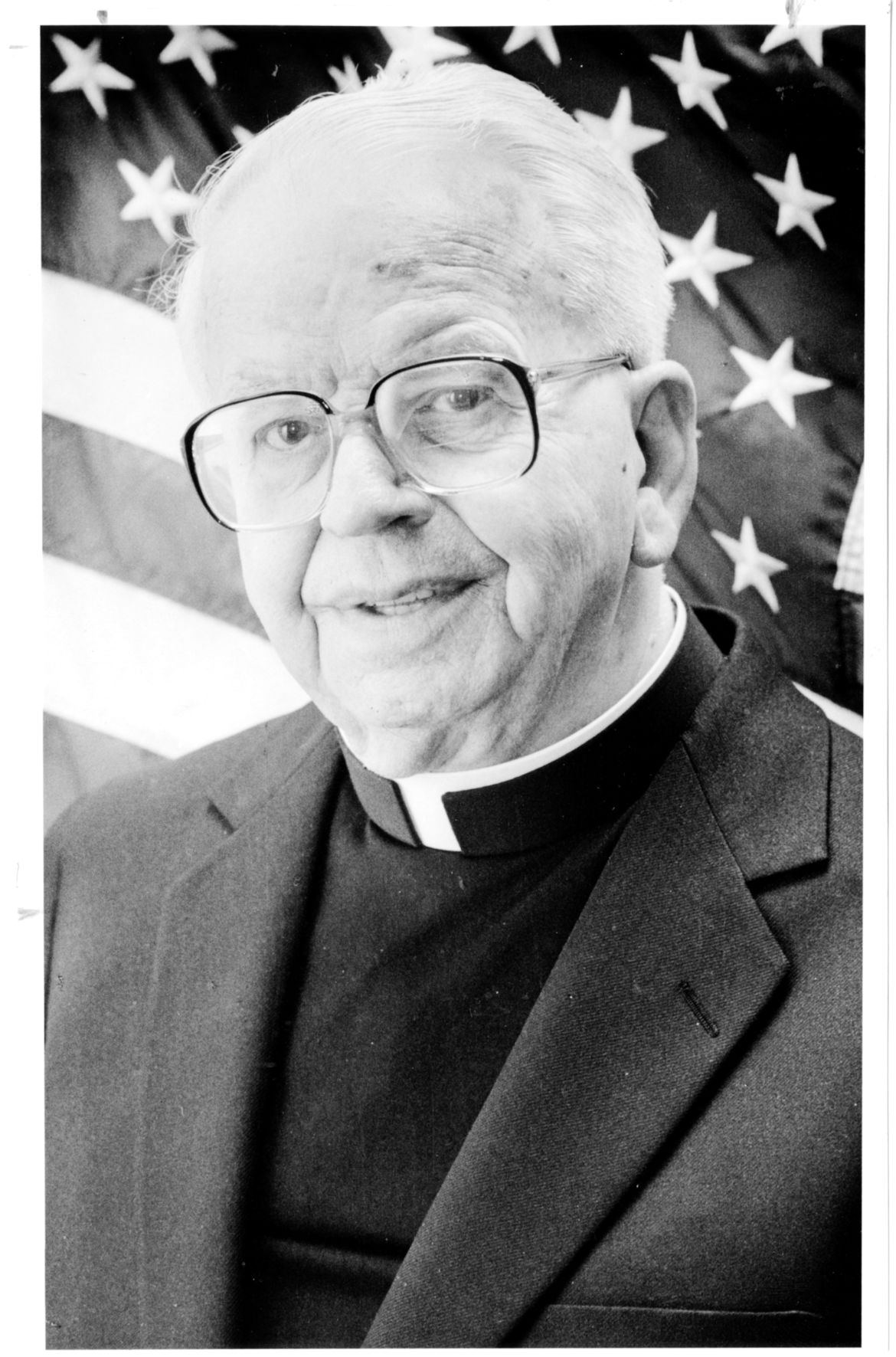 The Rev. Rudolf Fuhr, circa 1969. Rev. Fuhr offered a reward for information leading to the capture of the vandals who damaged 100 tombstones in the Holy Trinity Cemetery. 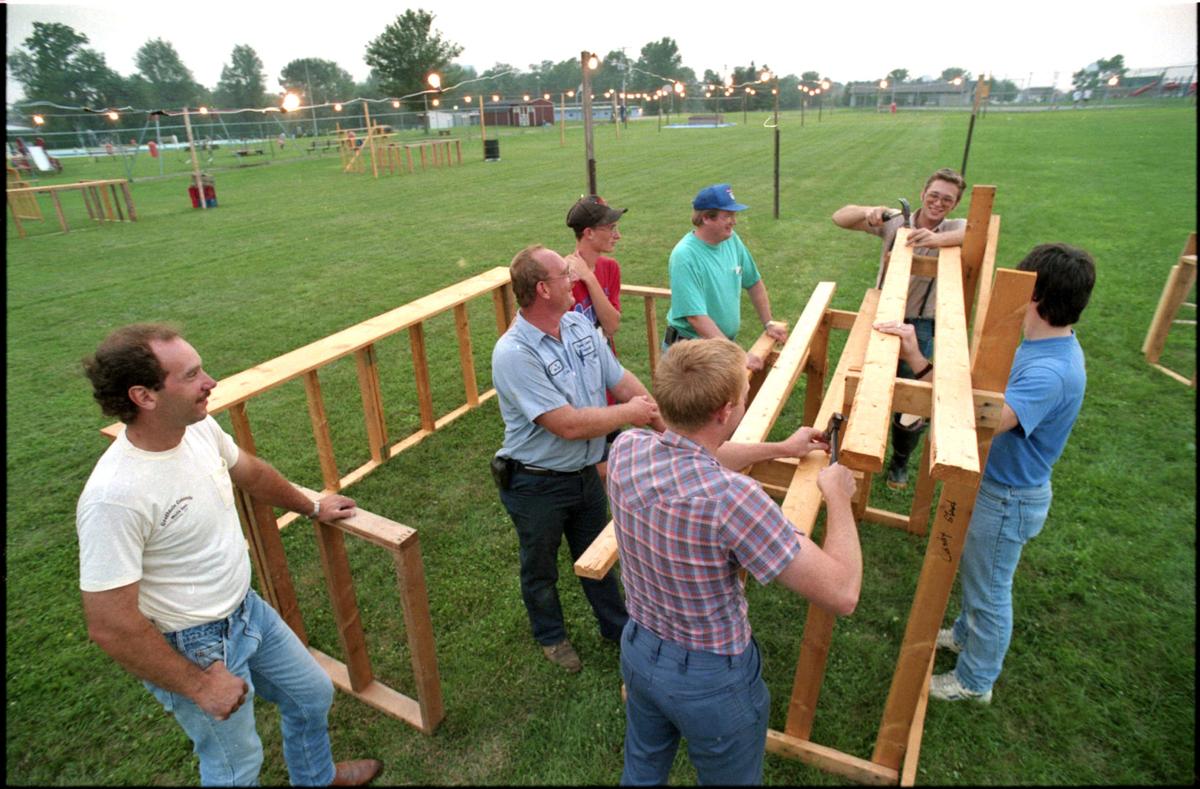 Bareville and Upper Leacock fire company volunteer firemen hammer together a carnival booth in preparation for the Leola Area Fireman’s Carnival on July 28, 1994.

The Rev. Rudolf Fuhr, circa 1969. Rev. Fuhr offered a reward for information leading to the capture of the vandals who damaged 100 tombstones in the Holy Trinity Cemetery.

Bareville and Upper Leacock fire company volunteer firemen hammer together a carnival booth in preparation for the Leola Area Fireman’s Carnival on July 28, 1994.

25 Years Ago: The July 28, 1994, New Era reported on preparation efforts for the Leola Area Fireman’s Carnival. Committee members worked to string lights, assemble booths and prepare Leola Community Park for carnival-goers. More than a fundraiser for the volunteer fire companies in the area, it was a chance to make the all-volunteer companies more visible. The goal was to build connections to the communities that supported them.

Also in that edition, the newspaper covered a report outlining pipeline safety. It stated that the two main causes of pipeline accidents were diggers and corrosion. Digging breaks happened when developers, construction workers, homeowners and others dug foundations or trenches or sunk poles without checking pipeline locations first. Most accidents were due to digging with one in five being caused by corrosion. Corrosion was said to affect mainly older pipes.

Antique Toolbox: Do you have any idea how July's 'mystery' objects were used?

50 Years Ago: More than 100 tombstones were damaged in one weekend of vandalism at the Holy Trinity Cemetery in Columbia. Tombstones and monuments were overturned throughout the cemetery. One monument was “disfigured with mud.” Father Rudolf Fuhr offered a $300 reward from the cemetery association for information leading to the arrest of the culprit. Columbia Borough Police were investigating, the July 28, 1969, Intelligencer Journal reported.

What is this Lehnware piece worth? Find out in this week's episode of 'What's It Worth? with Dr. Lori'

75 Years Ago: The July 28, 1944, Intelligencer Journal reported that Lancaster continued to “outclass” all other counties in the Central Pennsylvania District when it came to industrial scrap collection. For the second time, the county set a collection record: more than 7,367,880 pounds of scrap were tallied in the last drive. Lancaster also salvaged the most paper, collecting 471,516 pounds.

Also in that edition, it was reported that Japanese American citizens described the people of Lancaster County as “unusually friendly.” Kay Kinoshita and her niece Chyoko Maedo came to live in Bird-In-Hand after being released from a relocation center in Poston, Arizona. Kinoshita made her remarks while speaking at a meeting of the Lancaster Inter-Racial Council.

100 Years Ago: The county treasurer passed along an announcement from the Pennsylvania Game Commission: It was blackbird season. Despite the fact that licenses would not be sent out until Aug. 4, hunters who shot blackbirds would not be prosecuted. Protections were also lifted from the pine or red squirrel. The July 28, 1919, New Era had the story.

The same edition reported that 1,000 play-center children were taking part in a city-wide sing. Created by the Recreation and Playground Association, the event would showcase its summer programs. Children would be moved from their regular playgrounds to Lemon Street for the sing. It was hoped that parents would come to the event and take their children home afterward.

National Headline: Centennial event of Odd Fellows planned for Sept. // Baltimore to be scene of great gathering in the week of September 14th // They expect 50,000 visitors