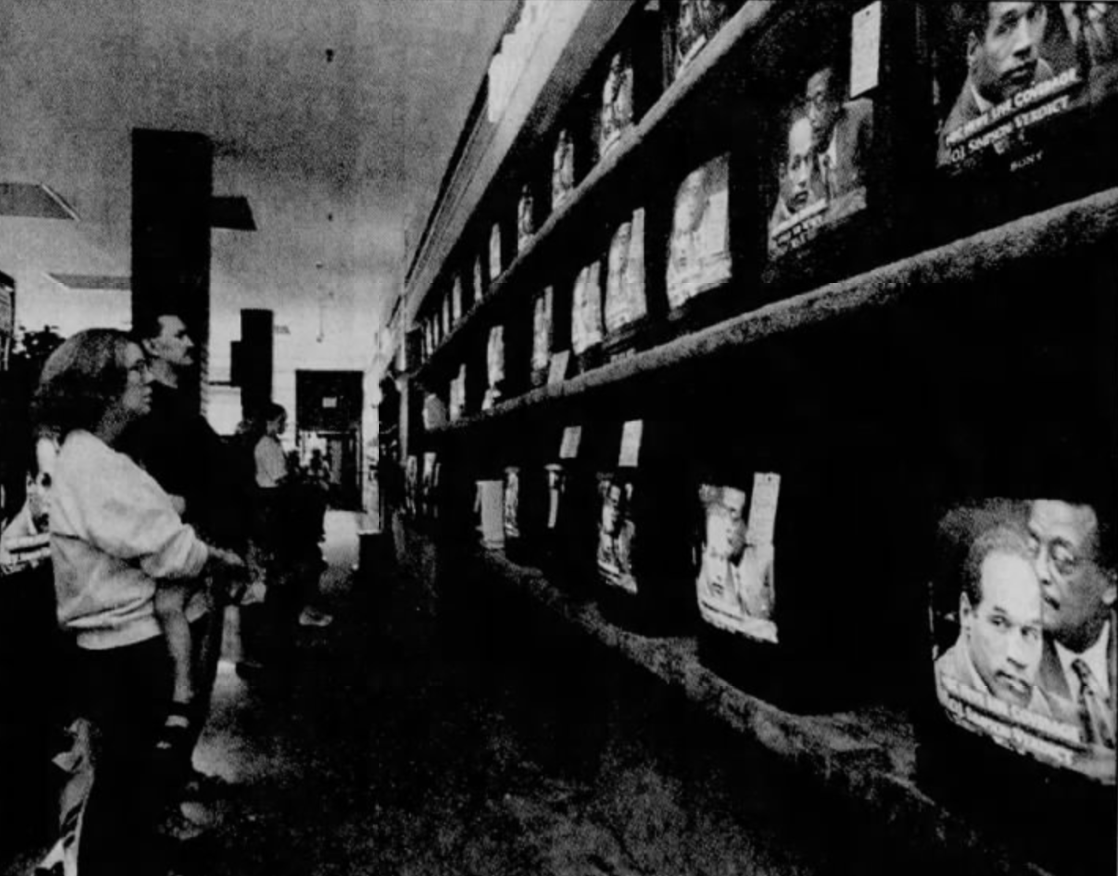 A crowd of people gathered in the electronics department of Boscov's at Park City Center to watch the verdict in the O.J. Simpson trial on Oct. 3, 1995.

This architectural sketch of the proposed railroad museum in Strasburg was revealed in October 1970.

Throughout most of 1995, many Americans were entranced by the trial of O.J. Simpson, who was accused of killing his ex-wife, Nicole Brown, and her friend Ron Goldman.

In the days before widespread internet access, television, radio and newspapers were the methods by which people followed the day-to-day drama of this high-profile case - Court TV and other cable networks showed the trial on a daily basis, from its beginning in January to the announcement of the verdict on Oct. 3.

That verdict - in which Simpson was found not guilty - was massive news. The next morning's Intelligencer Journal included four stories on the front page, plus several pages worth of additional stories about the case inside the paper.

Two of the front-page stories were local: One brief blurb about Lancaster city police fielding calls from a public unhappy with the verdict, and a longer piece about how Lancaster County residents followed the news and reacted to the verdict.

"Lunch hours were lengthened. Office bets were settled. And a murder trial watched like none other this century ended abruptly, launching frenzied debates over DNA evidence, the nation's legal system, a bloody glove and racism.

"Minutes before the verdict, more than 80 people gathered around the 50-plus televisions in Boscov's electronics department at Park City Center."

When the verdict was finally announced, the article states, most people in the crowd at Boscov's expressed discontent with the result, with a few appearing to be pleased.

The trial that enthralled a nation was over - but discussions and debates in the aftermath had barely begun.

Simpson is found not guilty, goes home a free man

Railroad attractions have long been a part of Strasburg, but in 1970, one of the biggest ones was just being announced.

What would eventually become the Railroad Museum of Pennsylvania was revealed by way of an architectural sketch, showing the "ultra-modern" building that was to be constructed right across the road from the Strasburg Rail Road.

The state had allocated more than $1.7 million for construction of the museum building and its associated exhibit spaces.

Construction was not scheduled to begin until a water supply study was completed.

A story of a house fire made the front page of the Intelligencer Journal on Oct. 4, 1945, at least in part because of the age of the person who set it.

A 7-year-old boy admitted to walking through the unlocked back door of an Atkins Avenue home while its owners were away, then lighting a match and dropping it into a pasteboard wastebasket.

The basket caught fire, and the flames quickly engulfed the wooden kitchen cabinets nearby.

A neighbor spotted smoke pouring from the house (and another neighbor saw the boy go in and out the back door), so firefighters were able to quickly respond and get the fire under control before the house was completely destroyed.

In 1920, before television - and indeed, even before radio broadcasting - how did baseball fans follow the World Series?

In many cases, fans gathered around mechanical scoreboards that were set up in public places, and manually updated by people who were receiving play-by-play information via telegraph.

Just such a "player board" was set up at the offices of the Lancaster Intelligencer so local fans could gather and share in the excitement of the "world's series" between the Cleveland Indians and the Brooklyn Dodgers.

Special telegraph service was set up for the series, ensuring that each play was reported in Lancaster within a matter of seconds. The board was set up outside the Intelligencer building, "at a height which will enable all to see with clarity each play."

Union of Austria and Germany will not be permitted

Strasburg: One of the most ‘remote-friendly’ towns in the USA [The Scribbler]

As we all know, more people are working at home during the pandemic. Often they are finding their homes inadequate to serve as both living spa…

The Million Man March, a terrible traffic incident, and the trouble with movies [Lancaster That Was]