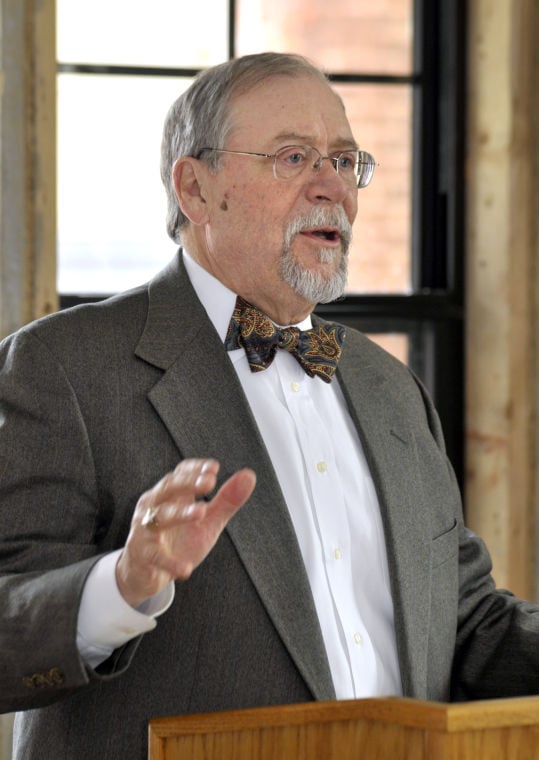 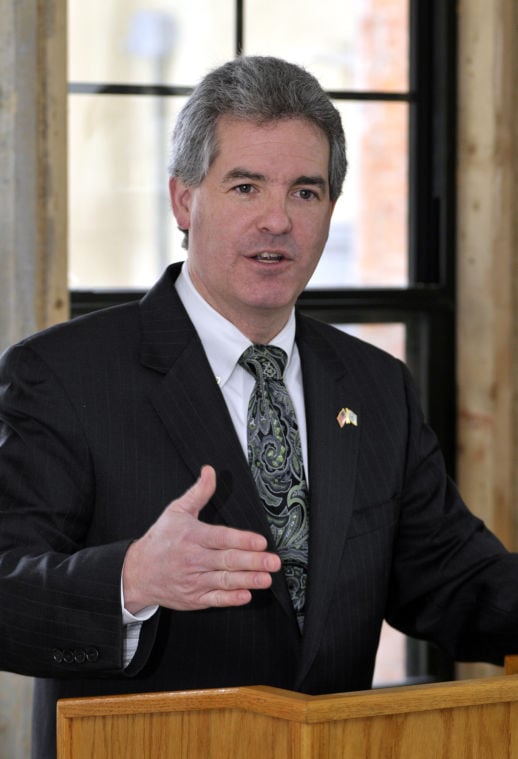 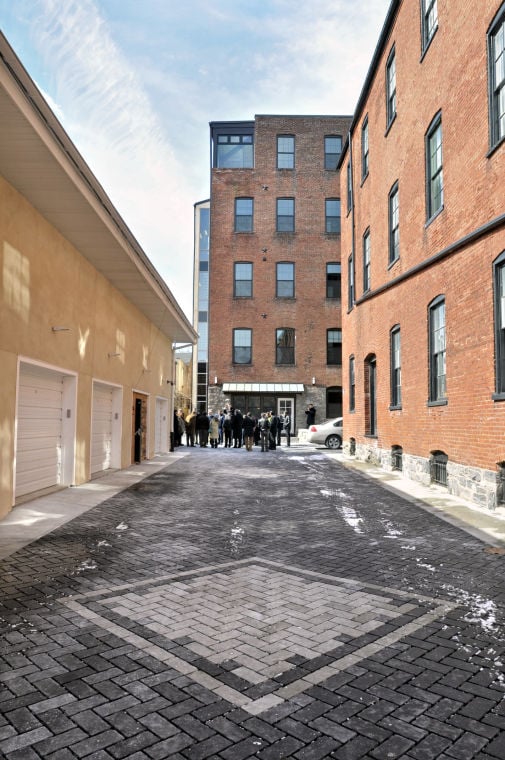 Tour of the green alley behind 317 North Mulberry Street in Lancaster. 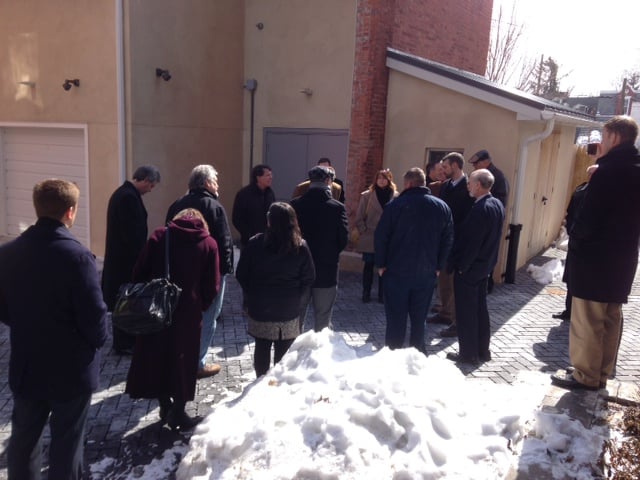 Lancaster city officials and representatives of the federal Environmental Protections Agency and other guests visited a new "green" alley at 317 N. Mulberry St. on Tuesday morning. 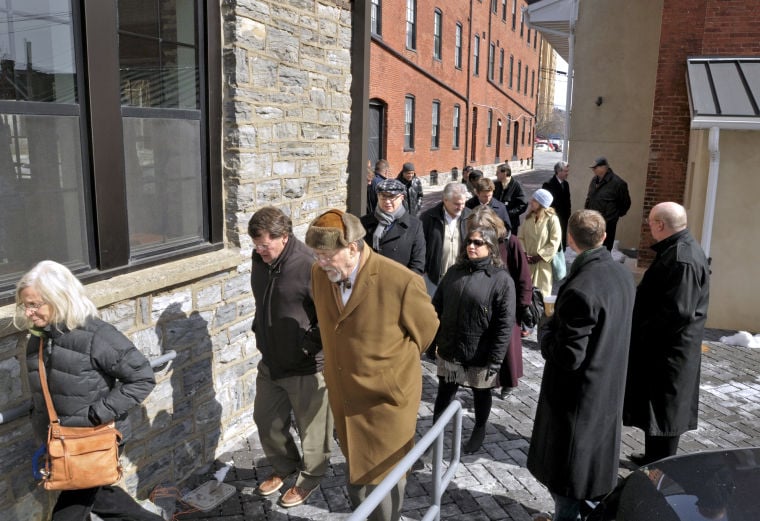 Mayor Rick Gray and others return from a tour of the green alley behind 317 North Mulberry Street in Lancaster.

Tour of the green alley behind 317 North Mulberry Street in Lancaster.

Lancaster city officials and representatives of the federal Environmental Protections Agency and other guests visited a new "green" alley at 317 N. Mulberry St. on Tuesday morning.

Mayor Rick Gray and others return from a tour of the green alley behind 317 North Mulberry Street in Lancaster.

The pavers did more than just look nice and provide a foundation for cars and trucks to drive upon. They also allow 408,000 gallons of rainwater per year to soak into the ground.

The project, part of a 25-year, $140 million plan, will help Lancaster deal with its stormwater pollution problem at the same time it benefits the quality of life in the city, Garvin said.

At the event, the EPA unveiled the results of a case study showing the economic benefits of the city’s “green infrastructure” plan.

The study will be used as a model for cities across the country dealing with the same issues, Garvin said.

In Lancaster’s case, the city is polluting the Conestoga River with nearly 1 billion gallons of stormwater mixed with raw sewage that annually overflows from the city’s wastewater treatment plant during heavy storms.

The city was facing an EPA fine of $37,500 per day for failing to correct the problem.

Instead of building large storage tanks that would hold the overflow until it could be treated, the city chose to plant trees, install rain gardens and vegetative “green” roofs, and porous pavement, such as the alley, to catch stormwater.

Doing so is expected to save the city $121.7 million over the 25 years compared to building the storage tanks, Garvin noted, and $661,000 annually in the cost of treating the rainwater.

And it comes with the added benefit of beautifying and investing in the city, he said.

“We’re not just talking about water pollution when we talk about green infrastructure, we’re really talking about quality of life for our residents,” Garvin said.

The alleyway would have been rebuilt anyway as part of the $2.4 million renovation of the former tobacco warehouse into 10 residential condominiums, said developer Robert Redcay.

The city offered to pay 90 percent of the cost of the $75,000 alley as a demonstration project. Otherwise it would have been covered in asphalt, said Redcay, of Redcay Industrial Development company.

“It saved us money,” said Redcay, “but aesthetically, it looks better and everybody here feels good about the project. We feel that we’re doing our part.”

Garvin praised city Public Works Director Charlotte Katzenmoyer for taking the opportunity to make the alley a rainwater collector for the condo building and surrounding properties.

Similarly, he praised the city for incorporating stormwater management into the reconfiguration of the Plum and Walnut streets intersection.

“Basically, whenever we do anything in the city, concerning our infrastructure, we look at the green aspects of it and how we can do things better,” the mayor said.

Incorporating the stormwater improvements as part of other projects was anticipated to cost $51.6 million, the study found. That compared to the $94.5 million cost of doing green infrastructure as stand-alone projects.

Katzenmoyer said the city has completed 30 green infrastructure projects and has another 20 ready to begin this spring. Those are being funded through a $7 million low-interest loan the city received from the Pennsylvania Infrastructure Investment Authority.

The 50 initial green infrastructure projects include both public and private projects, Katzenmoyer said.

Many of the private projects include installing green roofs on buildings, such as one going on the Stevens House apartment building, and adding rain gardens to parking lots, such as the lot at the City Crossings building, she said.

Some places, such as St. James Episcopal Church, have undertaken green infrastructure improvements as part of their projects without receiving public money.

Katzenmoyer hopes those will become the norm. The city needs about half of the projects to be undertaken by private property owners to meet its goals.

There is not enough public land in the city to allow green infrastructure to succeed without the cooperation of property owners, she said.

Redcay said the alley has actually helped in the marketing of the condos. Seven of the 10 have already been sold. The remainder range in price from $295,000-$325,000, he said.

“I think it shows that when government and business work together we can solve problems and make progress,” said Redcay.