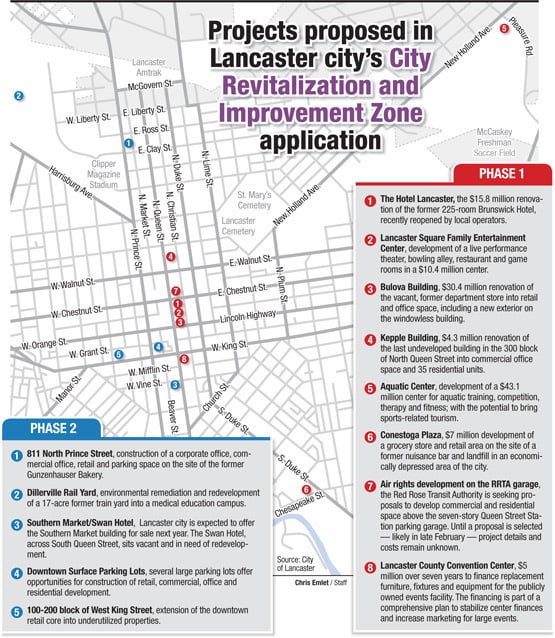 There are eight projects listed in the first phase of the city's CRIZ application. Total investment from those projects is expected to top $210 million. (Lancaster Newspapers) 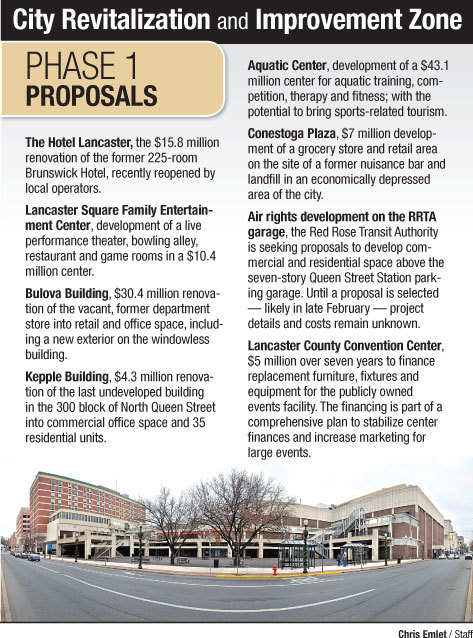 Earlier this month, city officials said they intended to pursue more than $10 million in redevelopment plans for Lancaster Square under the program. (Lancaster Newspapers file photo)

There are eight projects listed in the first phase of the city's CRIZ application. Total investment from those projects is expected to top $210 million. (Lancaster Newspapers)

Earlier this month, city officials said they intended to pursue more than $10 million in redevelopment plans for Lancaster Square under the program. (Lancaster Newspapers file photo)

Within a year, Lancaster city could see the first funding available under a new state program expected to spur economic development.

Lancaster's application to be in the CRIZ, submitted late last month, promised the program could stimulate $210 million in new investment during its first phase.

"With First Fridays, the burgeoning arts district, new shops and restaurants, there is a success here on which we can build," state Sen. Lloyd Smucker said Monday at a hastily arranged press conference.

"Even with all this new growth and investment, however, there are areas in Lancaster that cannot be developed without incurring a lot of additional cost."

He was referring to so-called "brownfield" sites, such as the condemned Lancaster Square building and the adjacent Bulova building, which have sat vacant for years.

"Brownfield" sites, where demolition is required and environmental remediation might be needed, are more costly to redevelop than "greenfields," such as rural farmland.

"This CRIZ program will allow us to overcome this hurdle, and in so doing, the full potential of this wonderful city can be unleashed," said Smucker, who introduced the CRIZ legislation and championed its passage.

The CRIZ effort began after Lancaster Mayor Rick Gray asked Smucker if he was aware of the strides Allentown was making with it's Neighborhood Improvement Zone program.

Staff members from Smucker's and Gray's offices crafted the CRIZ legislation based on that program.

The new CRIZ law was signed by Corbett in July.

Gray on Monday called it a "team effort."

Financial incentives to encourage private-sector developers to go ahead with projects will come from increases in state tax revenue from CRIZ areas.

New revenue from state corporate, sales, personal and earned income, liquor, amusement and other state taxes generated by projects will be used to repay bonds or conventional loans to finance the projects.

In that way, the program is intended to be "revenue neutral." It does not take existing state tax revenue or existing revenue from the city or School District of Lancaster.

"It does not raise taxes. It grows the tax base," Gray said.

He predicted the CRIZ program will raise property values and help create jobs.

"It's a win-win all around," the mayor said.

Since the legislation was drafted with Lancaster in mind, it had been expected that Lancaster would be one of the first cities named to the program.

Other cities were eligible. In addition to Lancaster and Bethlehem, Erie, Reading and York also applied.

With the designation, city officials will begin preparing tax information to be submitted to the state by June. They must establish the amount of 2013 state taxes being paid by businesses in the CRIZ zones.

That information will serve as a baseline. Future increases in state tax revenue over that amount will be used for debt repayment.

Next month, an appointed seven-member CRIZ authority board will begin meeting monthly. Board members will review projects for funding.

The first funding will likely be available in late 2014, said Randy Patterson, director of city economic development and neighborhood revitalization.

"That allows us to go so much further," developer John Meeder said of the CRIZ. "It's a huge help."

Meeder is leading a development group with two projects listed in the city application.

One would renovate all 225 rooms of the former Brunswick Hotel, now called Hotel Lancaster. Meeder reopened 66 rooms in October.

That project is expected to cost $15.8 million.

The second project is the creation of an entertainment center, with a boutique bowling alley, bocce courts and a theater adjacent to the hotel along Lancaster Square.

That project is expected to cost $10.4 million.

Smucker, a West Lampeter Township Republican, said the 30-year program to redevelop the urban core "fits hand in glove" with efforts to preserve farmland in the outlying county.

Encouraging reuse of urban spaces relieves the pressure to build on open spaces, he said.

"Our local communities are the foundation of Pennsylvania's economy. We developed the CRIZ program to spark local economic growth, create jobs and improve the lives of city residents and visitors," Corbett said in a prepared statement.