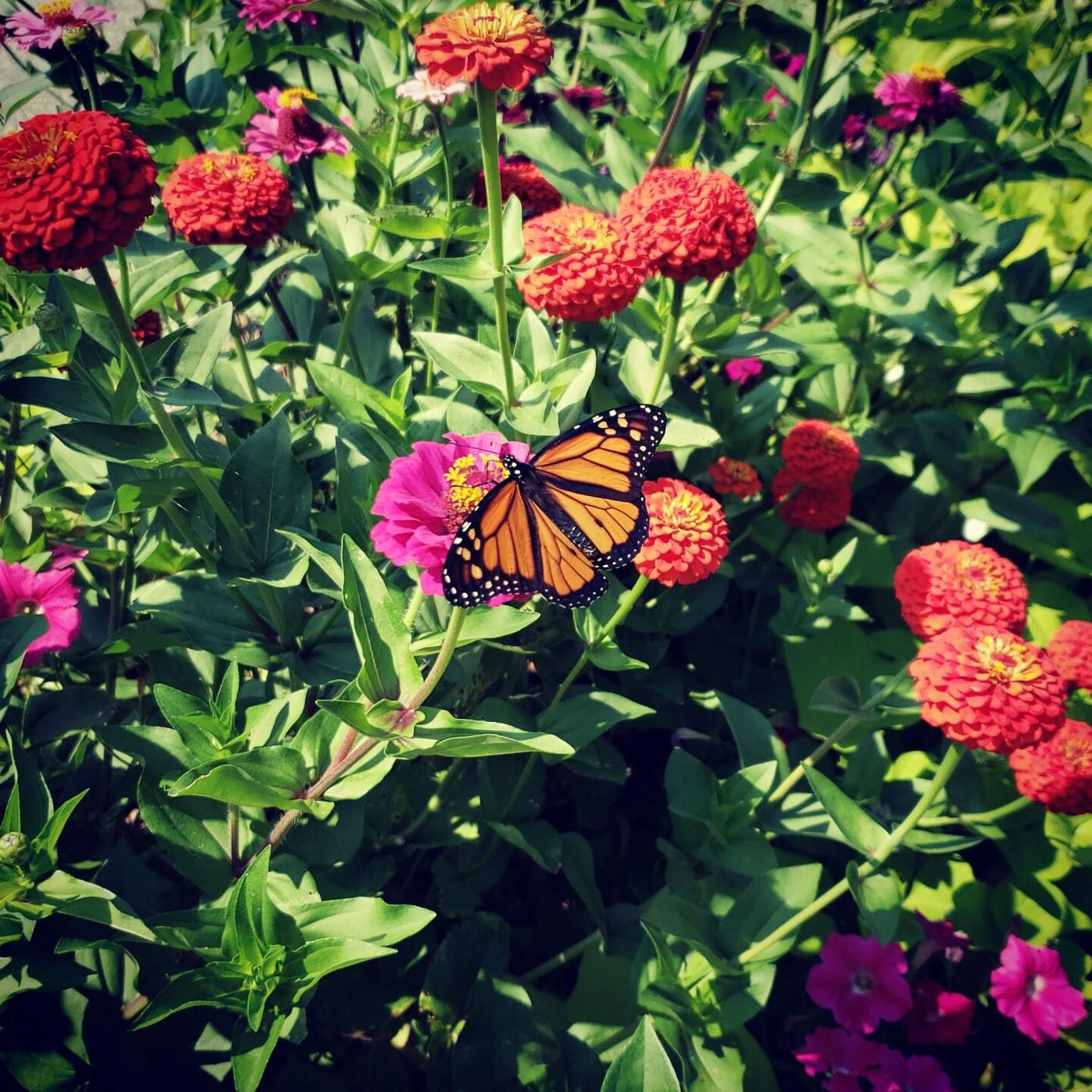 Zinnias are easy to grow; they bloom for months and they’re butterfly magnets. 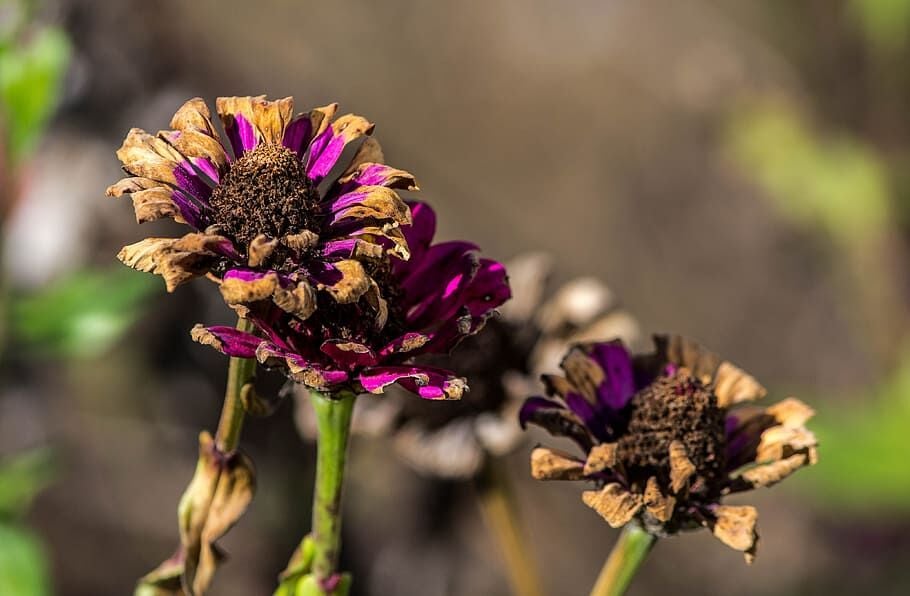 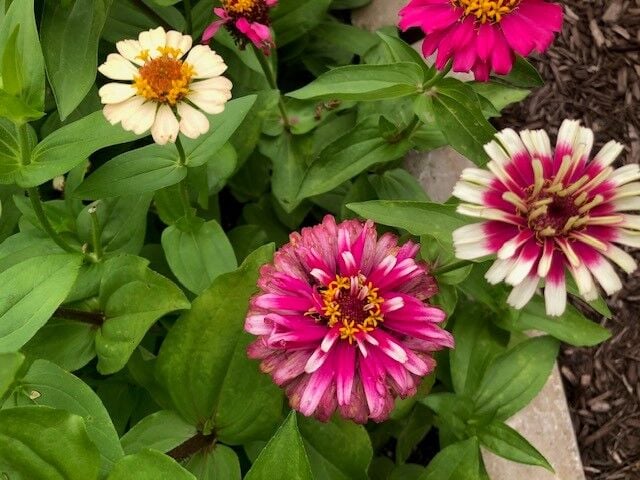 Perhaps zinnias are the flower we need most in 2020.

One word comes up over and over for gardeners who grow this classic annual.

Zinnias come in a rainbow of colors. They’re easy to grow, bloom for months and they’re butterfly magnets. They’ve been flowering for a few weeks in Lancaster County and will continue shining for months.

From the south to space

Zinnias grow well in Lancaster County and don’t mind the hot, humid days of summer. That’s because they’re native to an area stretching from the southwest to South America. Zinnias came to Europe in the 18th century. While the name might remind locals of a Pennsylvania Dutch diner, zinnias were named after Johann Gottfried Zinn, a German botanist.

This plant became popular in the 20th century as a cheerful, colorful, easy-to-grow plant. A local garden writer in 1911 suggested planting a hedge with zinnias in the back, yellow coreopsis in front and a border white phlox.

A century later, zinnias bloomed in space. Astronauts grew zinnias in the International Space Station to learn how to grow plants in microgravity. The experiment also explored how gardening improves loneliness and stress. The zinnias had a few issues not uncommon to Earth gardeners. The plants had too much water and then developed mold. A few died but astronaut Scott Kelly nursed one back to health and the space flower bloomed.

The space zinnia and the ones we grow on Earth are part of the asteraceae family, along with plants like asters and daisies. They are annual plants so they need to be planted every spring for a new round of blooms.

They don’t like the cold, so zinnias should be planted after the threat of frost.

Stover likes to sprinkle zinnia seeds in pots outdoors in early May. A few weeks later, she’ll plant more to stagger flowering. When the sprouts reach about 3 or 4 inches tall, she transplants them into a garden bed behind her East Hempfield Township home.

Where to find sunflower fields in Lancaster County for photos, yoga, a concert and more

Stover waters her zinnias frequently and usually worries about them during summer vacations. This year, the pandemic stopped travel. The bright side of staying home was the chance to plant even more zinnias in the front yard along a walkway.

“I’m constantly cutting bouquets for myself or for someone else,” she says. “The more you cut, they more they grow.”

Beverly Erb gets an early start on planting in the fall. When her zinnias have faded, she’ll crunch the seed heads left behind and sprinkle them onto the ground below. Around Mother’s Day, she’ll pick up a few extra packets at a dollar store and plant the seeds in the garden of her Upper Leacock Township home.

“They’re so simple and a beautiful splash of color at the time of year when other things are fading out,” Erb says. “And also because I love bringing cut flowers into the house.”

The blooms keep coming through September and even October.

Falan McMillen saved seeds last year from her first zinnia garden. She and her mother planted some seeds in a space where grass didn’t grow. The zinnias popped up quickly with blooms in a wide range of colors all summer long.

In the fall, McMillen and her daughter, Harper, 8, cut off the zinnia heads and placed them in a cardboard box to dry. In the spring, they planted them in the same spot and watched them thrive.

McMillen cuts zinnias to bring color into her East Hempfield Township home. She filled jelly jars with bouquets for coworkers too.

Years ago, the language of flowers carried meaning with each stem. A coral rose shows desire. Sweet peas mean “goodbye.” Spider flowers mean “elope with me.” For zinnias, there were meanings for specific colors. In general, zinnias meant “thinking of an absent friend.” How appropriate for this summer.

A flash flood watch has been issued for Lancaster County Thursday morning, beginning at 11 a.m. and ending at midnight, according to the Natio…

You’re invited to join the Volunteer Center and United Way of Lancaster County for a virtual volunteering information session.

Pandemic or not, dogs will still have their day at a few pools in Lancaster County in September.

Next year, the Bryce Jordan Center at Penn State won't be filled with its usual mid-February cacophony of dancers, live-music performances and…

The Friends of the Lancaster Public Library's Big Book Sale took in a big sum last week to help the library — nearly $11,000 more than during …

Many gardeners began the summer resolved to plant more edibles.

Lancaster County’s fairs may be canceled but there are still a few activities open to the public.

In-person gardening classes return to Lancaster County; plus where to find 30+ virtual garden classes in September

After a break, garden classes are returning throughout Lancaster County.