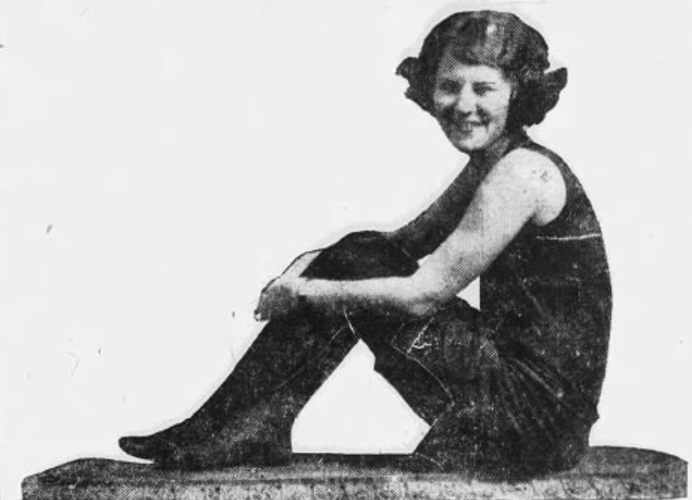 Elsie Mae Blumenstock, 19, was voted Miss Lancaster 1922. This photo, printed on the front page of the Lancaster Intelligencer, shows her in her bathing suit.

McCaskey High School students Jennifer Benson, left, and Jessica Shepps were happy to learn they were in the same journalism class in this photo from their first day at the new McCaskey High School, Aug. 27, 1997.
This story contains links that will take you to our archives site on newspapers.com. This content is free for LancasterOnline subscribers who are logged in. Click here for more information about how to subscribe.

A new school year began at McCaskey High School on Aug. 27, 1997, after a massive renovation and expansion project that cost $18.5 million.

But it wasn't just new classrooms and infrastructure that students were exploring - they also got their first taste of a few new concepts in education.

Perhaps the most wide-reaching change was the idea of bringing the internet to education. Each classroom had four computers - three for students and one for the teacher. Previously, computers at McCaskey existed only in the writing center and computer lab.

The "restructuring" also saw students of different ages grouped together to study certain topics, and teachers working in teams instead of alone.

Espy is charged with taking gifts as ag secretary

North Korea calls off talks with US

The program would involved training five people to be job placement interviewers, and encouraging both employers and prospective employees to use the Bureau of Employment Security as a shared resource.

Something like a pre-internet LinkedIn or Monster, the Bureau allowed job-seekers to register their names and a list of their skills. Bureau employees could then alert local companies of potential employees with skills matching posted job requirements.

The Lancaster program was part of a larger initiative to set up systems that could then be established in other cities nationwide.

In August 1947, food prices were on the rise, and the New Era surveyed local homemakers for a front-page story about how they were trimming the cost of putting food on the table for their families.

Among the solutions city women had found:

Military training for able-bodied youths is urged by Dewey

$2 billion a year urged for US scientific research

A week after the final call for entries, the Miss Lancaster competition sponsored by the Lancaster Intelligencer, had selected its winner.

Elsie Mae Blumenstock, 19, of Poplar Street, took the prize and would soon be departing by train for Atlantic City, where she would compete for the title of Miss America.

Blumenstock and her chaperone would travel by parlor car to Philadelphia, where she would join other beauties from around the country for a film session with "moving picture men" before departing later in the day for the shore.

In Atlantic City, Blumenstock would be staying at The Breakers, a lavish boardwalk hotel. The next two days would be a whirlwind of appearances, entertainment and gifts, culminating in the final pageant.

Rail board receives demand of 400,000 trackmen

Eels in a Lancaster fountain in 1972; a circus monkey on the loose in 1922 [Lancaster That Was]

A covered bridge on the move in 1972; YWCA campers find a liquor still in 1922 [Lancaster That Was]

From windmill to shoe and castle to caboose, 'mimetic' structures were built to imitate [architecture column]

Pat Boone at Long's Park in 1972; remembering Princess Diana in 1997 [Lancaster That Was]

Woolly bears and weather forecasts in '72; 'Beloved' filmed here in '97 [Lancaster That Was]