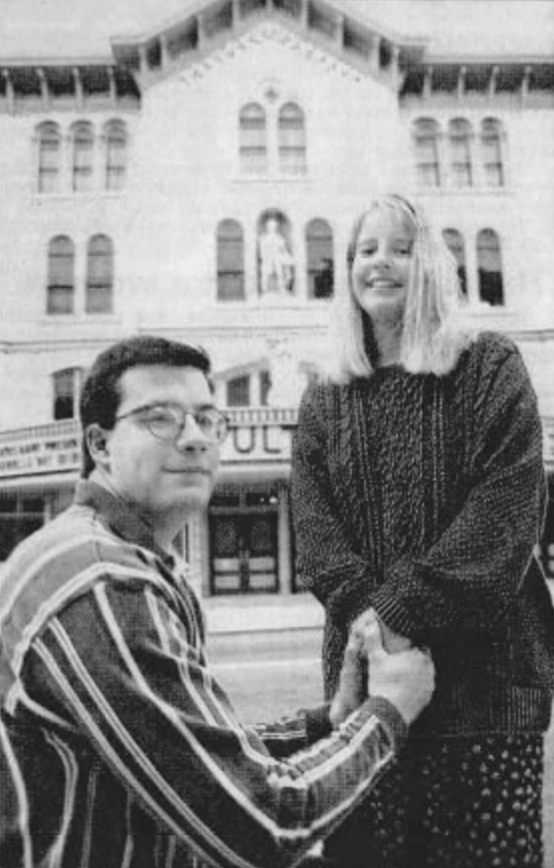 Jeff Taylor and Tanya Neidermyer pose outside the Fulton Opera House in December 1996, the day after Taylor surprised Neidermyer with an onstage marriage proposal after the curtain call of "Cinderella."

Santa Claus pulls on a pair of ice skates to be the first to try out the new ice rink in Lancaster Square on Dec. 18, 1971.

The Fulton Opera House has been known to produce some magical moments in local theater, and the December 1996 production of "Cinderella" was no exception.

And one night, the magic got a little bit more real for a local couple - as well as for the audience, who got to witness a surprise marriage proposal onstage.

The 500 theatergoers at the Fulton on Dec. 17 watched the show's wedding finale, then cheered the cast through two standing-ovation curtain calls. But the night wasn't over then - a young man in a dark suit hopped up onto the stage and dropped to one knee just as a spotlight zeroed in on a woman in a mezzanine box seat.

After he proposed marriage and she said yes, the crowd erupted into a pandemonium of cheers.

The suitor, Jeff Taylor of Lititz, arranged the public proposal with the help of the Fulton's executive director, Deirdre Simmons. His girlfriend, Tanya Neidermyer, suspected nothing when her boyfriend got up to dash to the rest room as soon as the show ended.

She said the proposal took her entirely by surprise - though she did find it odd that, during the first curtain call, Cinderella and the prince seemed to glance up and briefly focus on her.

TV sex and violence ratings to begin early next year

A long-awaited public ice rink was opened in 1971, with a special white-bearded guest skater the first to take to the ice.

Santa Claus himself took a break from his holiday tasks to pull on his skates and try out the brand-new ice rink in Lancaster Square, in the downtown Lancaster space that is now Ewell Plaza.

The ice rink was one of many pieces of the massive urban renewal project that reshaped an entire city block in the late 1960s and early 1970s.

The opening of the ice rink was delayed by more than a week due to equipment problems, and Santa finally took his test run on the ice on Dec. 18. However, the children who turned out to watch wouldn't be allowed to try out the rink themselves - the public opening wasn't until two days later.

Cable TV still in its infancy

In a "miraculous" stroke of luck, in 1946 three teenagers escaped uninjured from a car crash that involved their vehicle plunging off a bridge onto railroad tracks.

On Dec. 18, Daniel Miller, 18, was driving a brand-new car along South Colebrook Road when he lost control on a curve, smashed through the wooden guard rails and plunged off a bridge, dropping 26 feet onto the Pennsylvania Railroad tracks.

Amazingly, neither Miller nor either of his two teenage passengers was hurt.

A similar crash occurred in January 1946 at the same spot, but in that instance two county youths were killed in the wreck.

(The site where Colebrook Road crossed the railroad - about five miles northwest of Lancaster city - no longer exists, having been demolished as part of the construction of Route 283.)

A heavy storm of torrential rain and high winds left a "trail of ruin" across northern Lancaster County in December 1921.

Trees were uprooted, barns demolished, roofs blown off of barns and houses, chimneys toppled and billboard flattened. No deaths or serious injuries were reported.

Estimated to be the most destructive storm in 10 years, the damage was centered around Lititz, with several buildings near the center of town sustaining damage, and significant destruction seen in Lititz Springs Park.

As World War II began, swiftly encompassing nations throughout Europe and beyond, the United…

Here are the top 11 Christmas movies of all time, according to Rotten Tomatoes

Which Christmas movie is your favorite?

Many of us have Christmas memories. My wife and I always remembered a certain Christmas Eve. It occurred in the early 1970s, a few years into …

When the sing-along version of the musical "Annie Live!" is rebroadcast on the E! network Friday night, Dec. 24, viewers will see a familiar f…

With the holidays approaching, what better time to share some of my favorite Christmas memories from my childhood in the early 1950s?

The Village is up for sale.

Learning about the internet in 1997; inaugurating a new mayor in 1922 [Lancaster That Was]