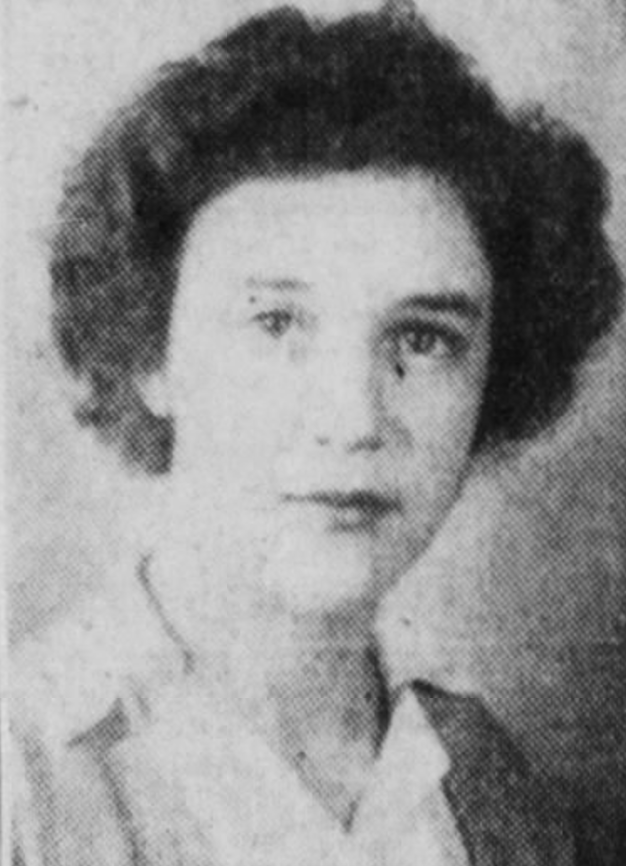 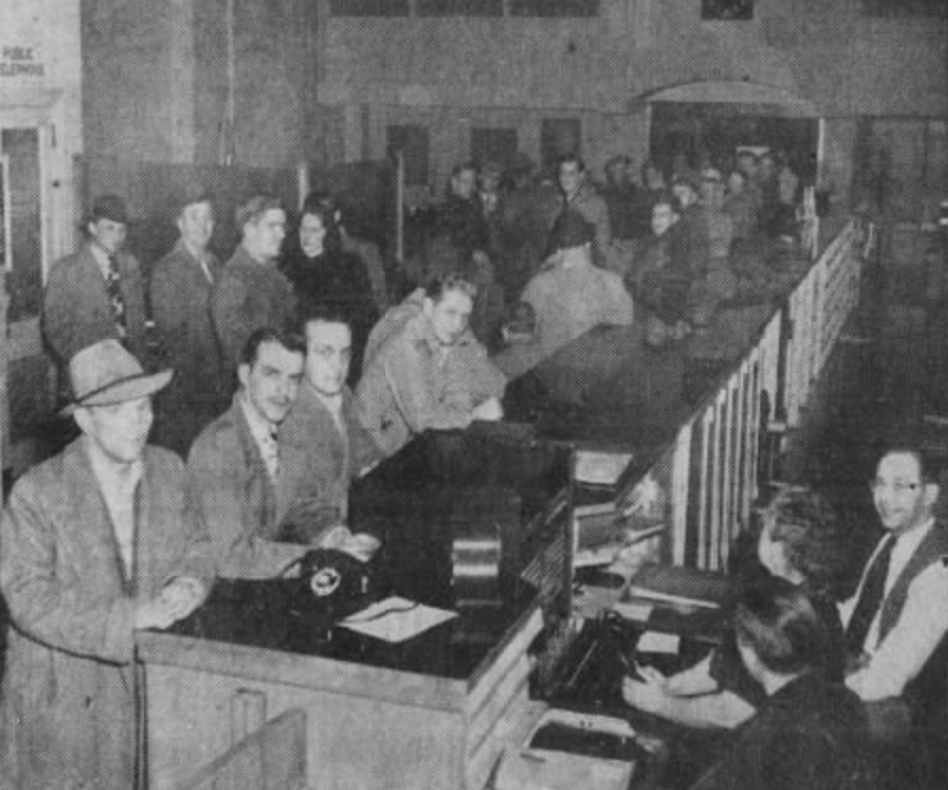 During the investigation of the murder of Marian Baker in 1950, members of the public lined up at the offices of Lancaster Newspapers on West King Street to await each new edition of the newspaper. 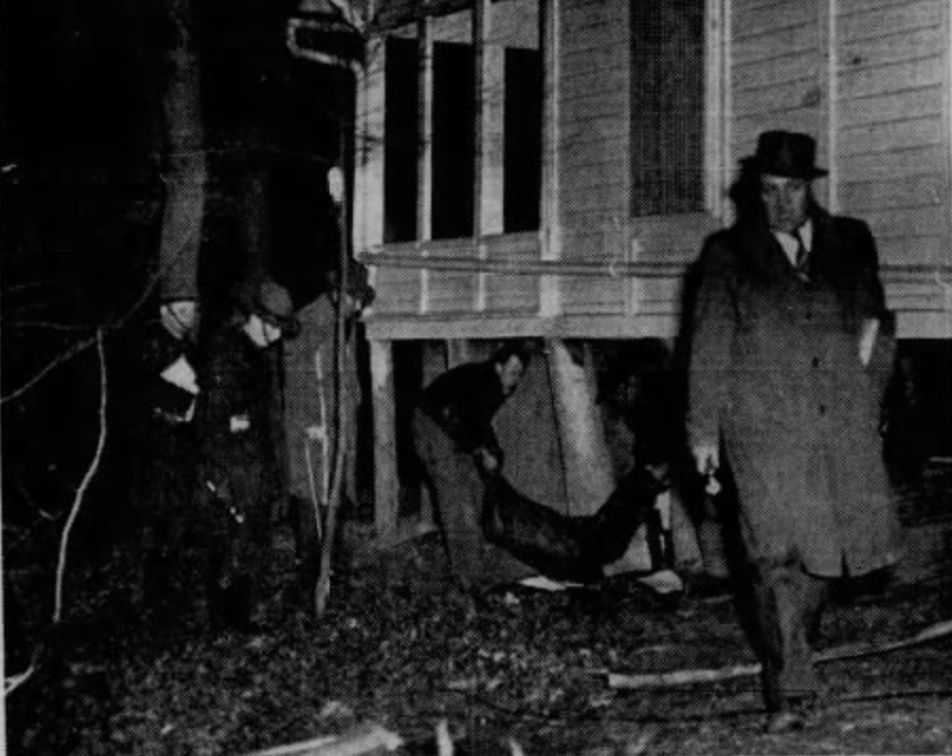 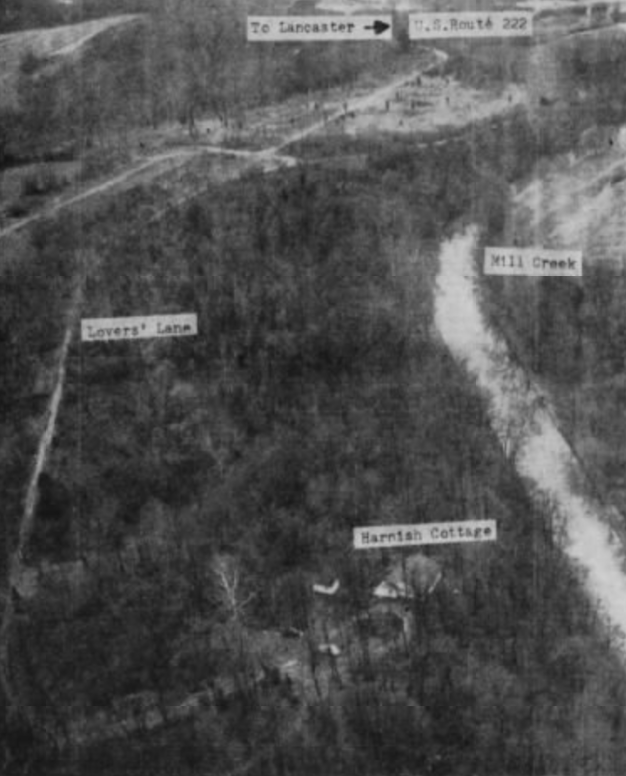 This newspaper photo illustration shows an aerial view of the Harnish cottage, where the body of Marian Baker was found in 1950. 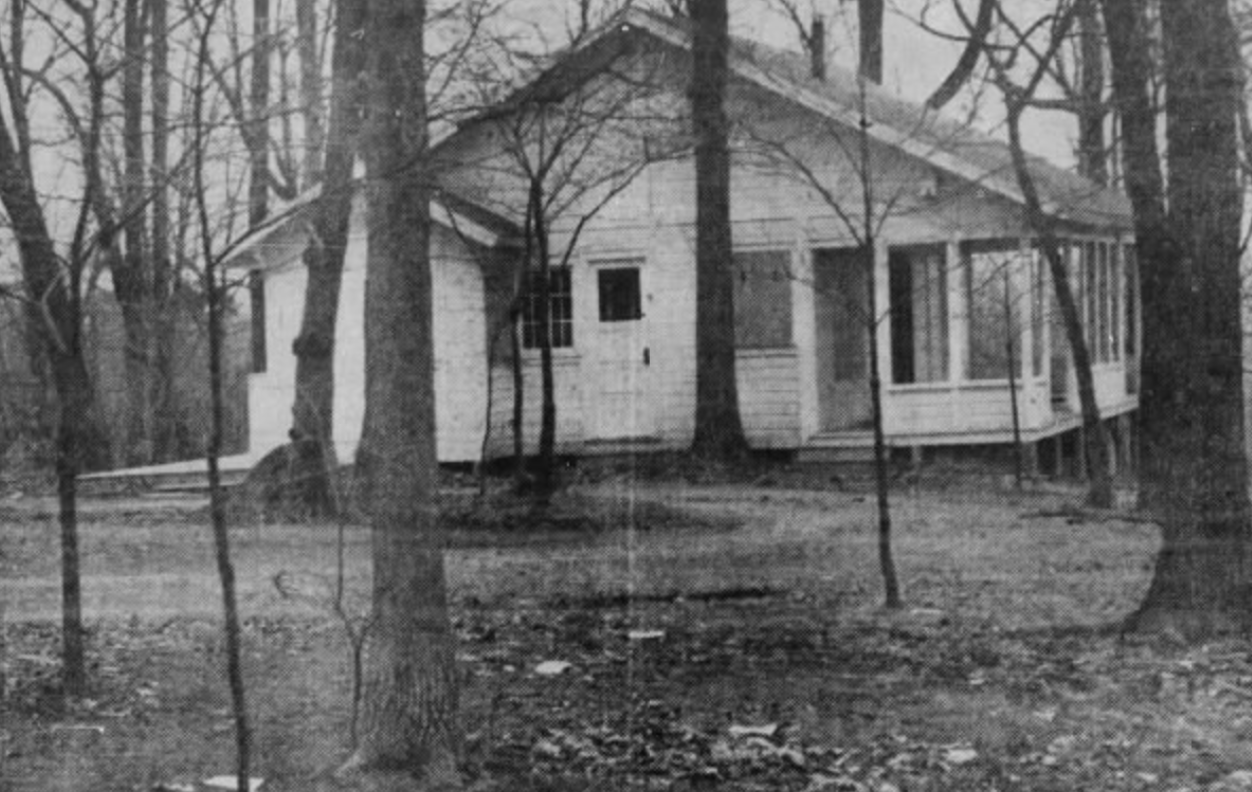 This vacant cottage along the Conestoga River about two miles south of Lancaster city was where Marian Baker's body was found in 1950. 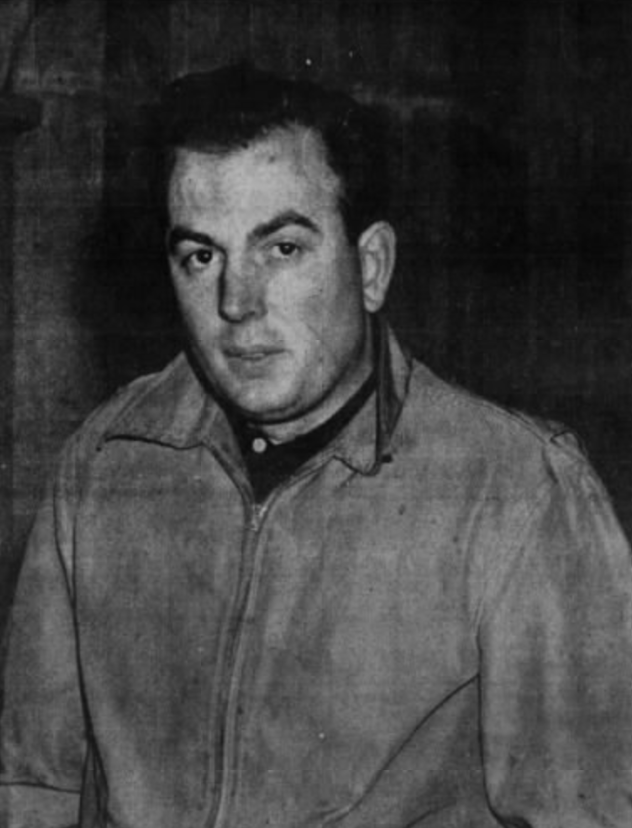 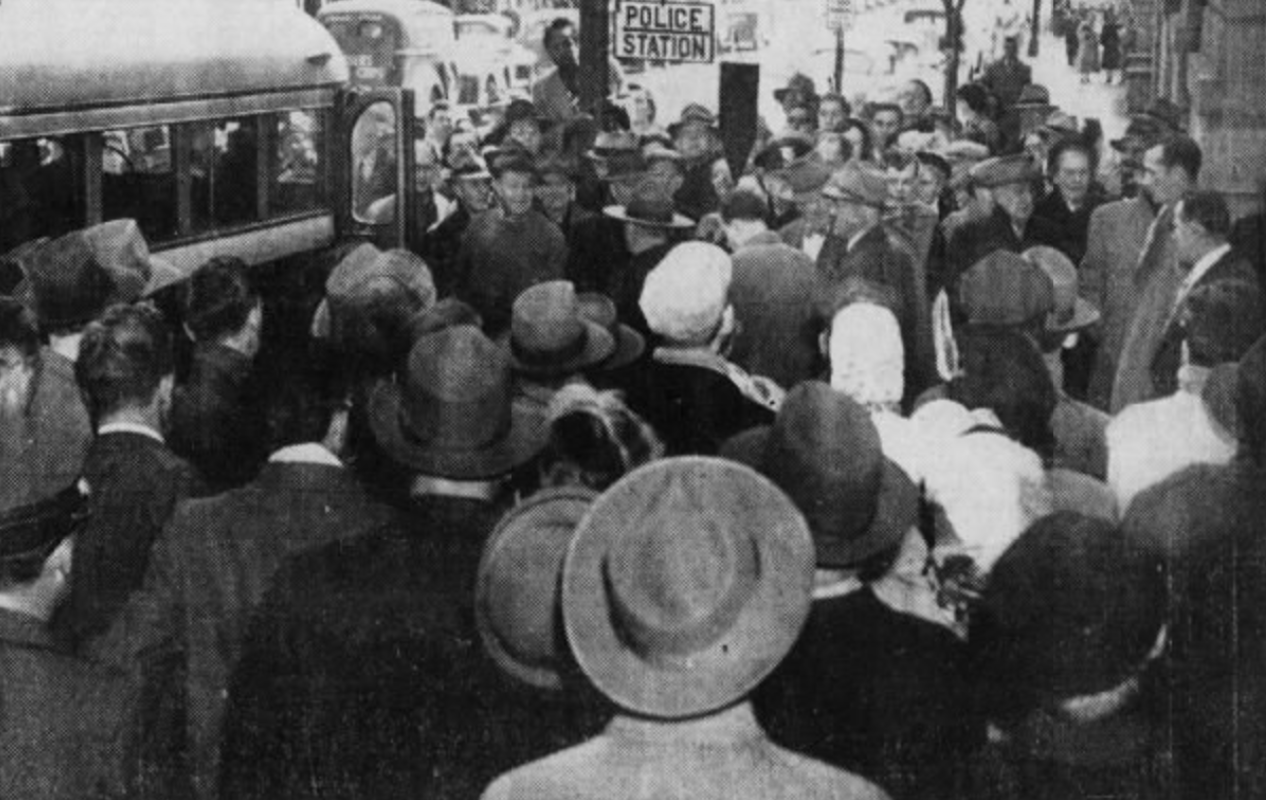 A crowd of about 300 people gathered outside Lancaster County Courthouse on March 14, 1950, to try and catch a glimpse of accused murderer Edward Gibbs.

During the investigation of the murder of Marian Baker in 1950, members of the public lined up at the offices of Lancaster Newspapers on West King Street to await each new edition of the newspaper.

This newspaper photo illustration shows an aerial view of the Harnish cottage, where the body of Marian Baker was found in 1950.

This vacant cottage along the Conestoga River about two miles south of Lancaster city was where Marian Baker's body was found in 1950.

A crowd of about 300 people gathered outside Lancaster County Courthouse on March 14, 1950, to try and catch a glimpse of accused murderer Edward Gibbs.

Baker, a 21-year-old city resident who worked as a secretary at Franklin & Marshall College, disappeared on Jan. 10, 1950. Two days later, she was front-page news.

City police were searching for the "attractive girl," who had been missing for two days from the rooming house where she lived. A police alert about the missing young woman had gone out to 13 states, to no avail.

Her clothing and some money were still in her room, suggesting she had not planned to leave the area. Family members said they were beginning to suspect foul play.

The evening paper on Jan. 12 reported that police were conducting a "block-by-block search" of the city, focusing on vacant lots, empty buildings and out-of-the way alleys.

By the morning of Jan. 13, a "slender clue" turned the attention of hopeful investigators to west Philadelphia, where a sandwich shop proprietor said she was certain the missing woman had been in her shop on Jan. 11 - when she dropped a bus token on the floor after paying for her food.

This sighting was reported as a possible break in the case, which the Intelligencer Journal called "Lancaster's most baffling mystery in years."

The following day, Jan. 14, Philadelphia police were "certain" that the mysterious "token girl" was indeed Marian Baker, and Baker's uncle, Leroy O'Donel of Conestoga, said he believed the dropped token was a deliberate signal for attention, and his niece was perhaps fetching food for her captor, who was waiting outside the shop.

But the same day, a witness reported seeing Baker at the train station in Harrisburg two days earlier, on Jan. 12, boarding a bus in the company of a "red-headed girl."

Amid all of the rumors of sightings of Marian Baker, Lancaster police continued the investigation here, questioning Baker's fiancé, Edgar Rankin, and even stopping cars on out-of-the-way roads to search them.

The out-of-town rumors turned out to be fruitless. On Jan. 15, the Sunday News reported that Baker had been found slain just outside Lancaster city:

Her body was found under a vacant summer cottage along Mill Creek, about two miles south of the city. The property was owned by local attorney Martin Harnish, whose wife discovered the corpse.

On Jan. 16, the newspapers ran aerial photos of the area around the cottage, illustrating its proximity to a popular "lover's lane" and showing the path along which Baker's body had been dragged from the site of her killing to where her body was hidden.

Still, police were no closer to identifying the killer.

As Baker's funeral was held under the eye of media attention, State Police lab reports revealed that she was killed just a half hour after she disappeared, and a reward was posted for information leading to the arrest of her killer.

On the morning of Jan. 19 - exactly a week after Baker's case first appeared in local newspapers - a massive headline atop the Intell's front page read "F&M senior confesses!"

New Jersey native Edward Lester Gibbs, 25, a former G.I. who lived with his wife in college housing while attending F&M, walked into the office of the college president and confessed to the murder, offering no motive.

(Later, it was revealed that the impetus for his confession was the fact that he spotted police officers examining his car.)

"I did it on an impulse," Gibbs claimed of the murder, though he admitted he also stole money from Baker's purse and spent it.

Gibbs described in a four-page statement the details of the crime: He had been wandering downtown Lancaster the afternoon of Jan. 10 when he met Baker, whom he knew from F&M. He offered to give her a ride back to campus. They drove around a bit, and when they reached the secluded area where her body was later found, he killed her - first by attempting to choke her, then by striking her repeatedly with a lug wrench, which he then threw into the nearby creek.

Hours later, he returned to the scene and relocated the body, moving it from the underbrush to a hidden spot beneath the vacant cottage.

Over the next days, a shocked campus reacted to the news that Gibbs was the killer.

"It can't be Ed," his friends said, as they related stories of discussing the murder with him while playing cards or socializing. Meanwhile, the murder weapon was found in the Little Conestoga Creek, exactly where Gibbs said he left it.

City residents lined up outside the newspaper offices, waiting for each new edition of the paper to see how the case unfolded.

Every detail of the case was doled out to an eager public:

Gibbs, on a visit to his hometown of Pittman, N.J., over the weekend after the killing, told friends "They will never get the guy who did that."

Gibbs' father, who had a heart attack upon learning the news that his son had confessed to murder, recovered enough to travel to Lancaster and visit him in prison.

On Jan. 28, a crowd of hundreds gathered outside the office of Alderman J. Edward Wetzel, as a preliminary hearing for Gibbs was being held inside.

Gibbs was headed to trial for murder.

His attorneys, perhaps preparing for an insanity plea, had him examined by one of the nation's foremost psychiatrists, Dr. Edward Strecker, a professor at the University of Pennsylvania.

Later, Gibbs was taken to Philadelphia to undergo scans using a brand-new piece of technology - the electro-encephalogram, or EEG, which had only been in use for a couple of years.

Gibbs was set to go on trial March 14, and as that date loomed the media coverage switched from crime-scene reporting to courtroom drama.

On March 11, the Intelligencer Journal announced that the state would seek the death penalty for Gibbs, and the prosecution conducted its own psychiatric evaluations of the accused man, who entered a plea of not guilty.

Day by day, as the trial unfolded, every emotional or informational moment was reported in the newspapers.

The prosecution worked to show Gibbs' efforts to conceal his crime and build up an alibi for the time of the murder.

The defense focused on Gibbs' mental state - on the witness stand, Gibbs described wartime horrors that haunted him, and claimed his mind went blank when he killed Marian Baker, and his memory of the event "is not clear".

Dr. Strecker, the noted psychiatrist, testified that his examinations indicated that Gibbs was schizophrenic.

On March 17, after five hours of deliberations, the jury returned a verdict. Gibbs was found guilty, and would be executed in the electric chair. It was the first time in Lancaster County history that a jury had decreed the death penalty; previous death penalty cases - the last one in 1922 - had been decided by a judge.

Gibbs' attorneys appealed the verdict unsuccessfully, both locally and at the state level, over the course of the next several months.

On April 23, 1951, all appeals had been exhausted and Gibbs was electrocuted.

He remains the last person from Lancaster County to be executed.

The 1939 murder of Lucille Smith of Lititz didn't involve a months-long manhunt, or a myster…

Infamous crimes of Lancaster County: A southern-end 'house of horror' in 1935 [LNP archives]

In the spring of 1935, a missing person report turned into one of the most shocking and grue…