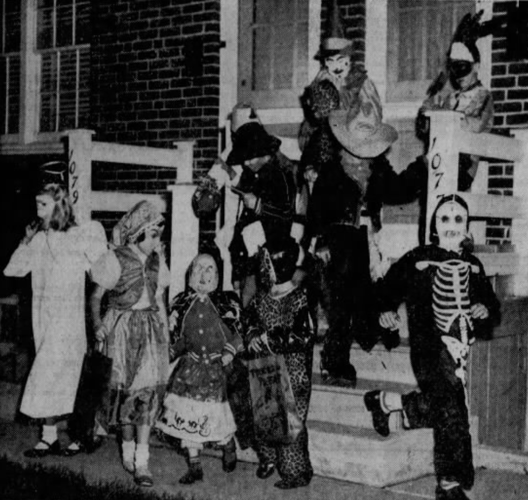 Costumed children head out for trick-or-treat night in this photo from Halloween 1955.

Before trick-or-treating was a common practice, Halloween candy was marketed differently.

Trick-or-treating has been an American tradition since sometime in the 1930s (though, according to National Geographic, it likely came to the U.S. from Canada). But what were the treats of choice for Lancaster County residents over the last hundred years?

To find out, we engaged in the deeply scientific practice of poring over old newspaper advertisements to see which types of candy appeared most frequently. We started with 1922, 100 years ago, and checked every 10 years thereafter, up until 1982.

Trick-or-treating wasn't done in Lancaster county at this time, but children and adults gathered for Halloween costume parties where candy was served.

Local merchants advertised "Hallowe'en candies" for sale, but didn't get specific about varieties. However, an article in the Lancaster Intelligencer about seasonal candy sales mentioned the most popular offering for that year: Chocolate-covered nuts.

Ten years later, there was still no trick-or-treating here, but the perennially beloved (or hated) candy corn was being advertised.

The phrase "trick-or-treat" first appeared in local newspaper ads in 1943; 1946 saw the term's first appearance in an article in a Lancaster newspaper.

Thus, 1942's candy ads still were not geared toward treats to hand out to neighbor kids at the front door. And some of the advertising around Halloween candy aimed to convince men to buy Halloween chocolates for their sweethearts.

But there were still lists of candies being promoted by merchants - this year's list was largely similar to that of 1932, with the addition of chocolate bon-bons and the mysterious "hoodoo mix," which appears to have been a mix of candy corn and pumpkins.

By this time, the phrase "trick-or-treat" was prominently featured in ads from local grocers and department stores.

This year wasn't too different from 1952 in terms of candy options - though the New Era's food page suggested making your own treats to hand out on Halloween.

If you still wanted to go the store-bought route, popular choices included:

By the 1970s, the name-brand chocolate candies we know today had begun to dominate local advertising.

Another annual tradition also had arrived by this time: The fear of drugs or poisons being added to trick-or-treat candy. Here's Ann Landers recommending kids avoid trick-or-treating altogether and opt for Halloween parties with friends and neighbors instead.

And here's what was popular in terms of candy:

In 1982, the discovery of cyanide-poisoned Tylenol raised fears of tainted Halloween candy to a fever pitch, and some cities and towns - including Harrisburg - banned trick-or-treating completely, while others discouraged the tradition.

There seemed to be fewer ads for Halloween candy in 1982's newspapers, but here's what was on offer:

Peach Bottom power plant expanded in 1972; Motley Crue controversy in 1997 [Lancaster That Was]

Lancaster man was Broadway animal wrangler in 1972; 'eggless Thursdays' in 1947 [Lancaster That Was]

Pennsylvania's first Black judge was a Strasburg native who spoke Pa. Dutch [Lancaster That Was]

A lunch-counter wedding in 1972; federally protected turtles in 1997 [Lancaster That Was]

Lancaster County has its share of local legends and ghost stories, from the Walking Statue of Lancaster Cemetery to the werewolves of the Hans…