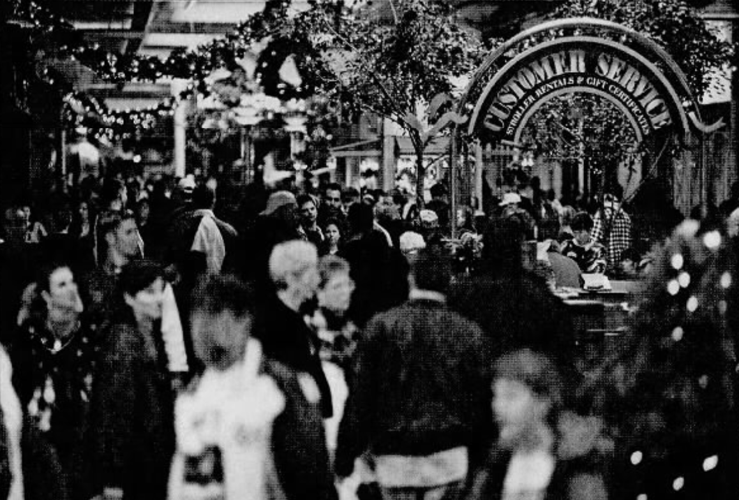 A heavily damaged small plane is seen in this photo from Dec. 24, 1997. A Lancaster County couple was returning home from North Carolina for Christmas when their aircraft skidded off the Lancaster Airport runway into a field.
This story contains links that will take you to our archives site on newspapers.com. This content is free for LancasterOnline subscribers who are logged in. Click here for more information about how to subscribe.

Hordes of Christmas Eve "power shoppers" (mostly men) packed Park City Center in 1997 - and they made the front page of the Christmas Day newspaper, too.

"Hundreds of fathers, husbands, boyfriends and brothers roamed the shops," according to the article, seeking that perfect gift to finish their shopping. Some were attempting to start AND finish shopping the day before Christmas, like Bob Hollister Jr. of Boyertown, who was rushing through Bon-Ton with his father, bob Hollister Sr. of Lancaster.

Though plenty of women joined the fray of last-minute shopping, the percentage of male shoppers was noticably higher than usual, especially in places like the women's clothing and lingerie departments.

But the busiest spots by far were jewelry counters. One jewelry shopper who was looking at diamond rings declined to give his name, as he was planning a Christmas morning marriage proposal.

Despite the looming deadline - the mall closed at 6 p.m. - early afternoon shoppers seemed "overwhelmingly cheerful" - especially the children lining up for a final chat with Santa Claus.

A Lititz couple, flying into Lancaster Airport on Christmas Eve 1997, escaped serious injury when their small plane slid off the runway.

Robert and Ellen Huber were flying home from North Carolina for Christmas when an apparent landing gear malfunction caused their aircraft to skid off the runway into an adjoining field, an airport official said.

Ellen Huber was flying the plane, which was mangled in the crash and likely would be a total loss. She suffered minor injuries, while her husband avoided injury completely.

A string of unusual charity donations - gold coins - continued in 1997.

As of the previous week, four gold coins had been dropped into Salvation Army collection kettles at local retailers. A fifth coin was dropped off at the Water Street Rescue Mission on Christmas Eve.

This coin was presented in person by a woman who declined to give her name, but said she was donating it on behalf of a man who wished to remain anonymous, but who hoped his golden gifts would inspire others to charity at the holidays.

"This glimmer of gold is not what I try to focus on," said Dick McMillen, president and executive director of the mission, "but I must admit my day was greatly brightened by this special gift."

Editor's note: This week's Lancaster that Was includes no items from 50, 75 or 100 years ago, as no newspapers were published on Christmas Day those years.

Collectors like to rotate collections with frequency and display their stuff in various parts of their homes. Some collectible items only make…

A massive Christmas party for kids in 1947; James Buchanan enthusiasm in 1922 [Lancaster That Was]

How a cult TV show led to the discovery of a rare coat once owned by C. Emlen Urban

A tailcoat once owned by C. Emlen Urban was found in a Denver-based thrift store.

Ringing in 1998 at Lancaster Square; a focus on bachelors for Leap Year in 1948 [Lancaster That Was]

A local first-grader met the President in 1998; odd lights in the sky in 1923 [Lancaster That Was]