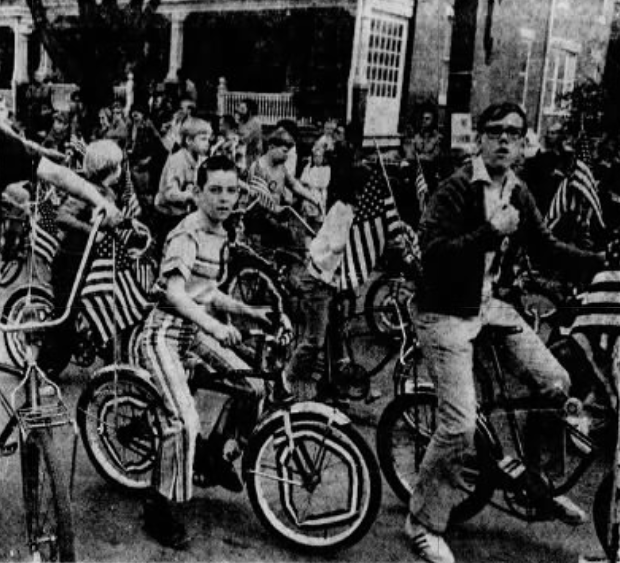 Young cyclists riding through the Loyalty Day Parade route in Lancaster city in 1971. 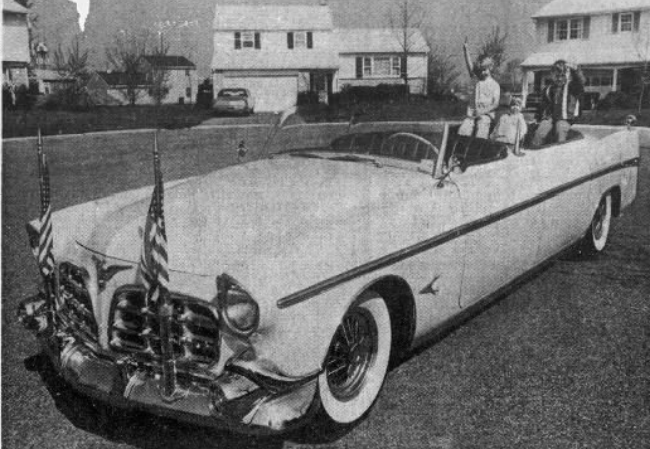 One of the three Chrysler Imperials built for President Eisenhower in 1952 was owned by a Manheim resident. It was used in the 1971 Loyalty Day Parade in Lancaster city. 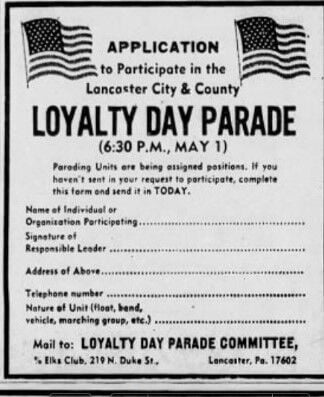 An application to participate in the Loyalty Day Parade in Lancaster city in 1971. 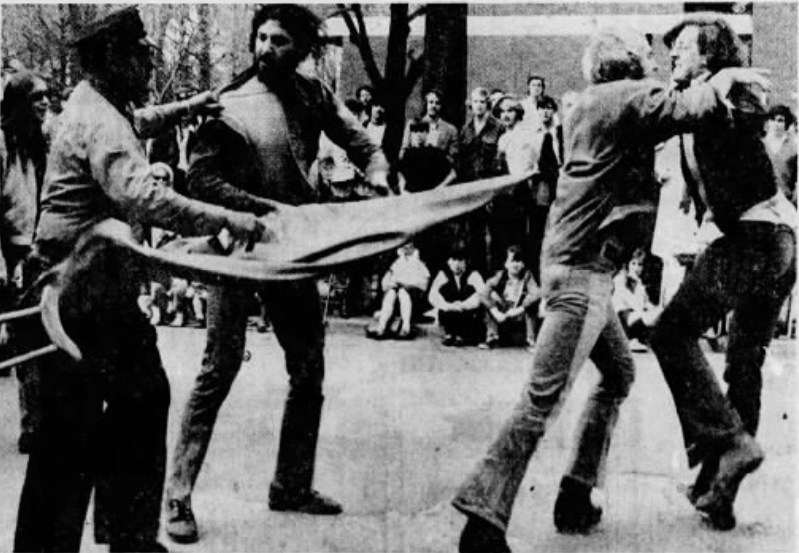 An image of a street fight that broke out during the 1971 Loyalty Day Parade in Lancaster city. The confrontation began when one parade viewer ran into the parade to take a Viet Cong flag away from a Vietnam War protester.

Young cyclists riding through the Loyalty Day Parade route in Lancaster city in 1971.

One of the three Chrysler Imperials built for President Eisenhower in 1952 was owned by a Manheim resident. It was used in the 1971 Loyalty Day Parade in Lancaster city.

The first observed Loyalty Day, originally called "Americanization Day," occurred on May 1, 1921, during the First Red Scare -- a period in the early 20th-century of U.S. history in which widespread fear of far-left extremism riveted the country.

During the Second Red Scare in the mid-1950s, President Dwight D. Eisenhower proclaimed May 1, 1955 the first observed Loyalty Day in the United States. In 1958, it was made an official recurring holiday by the U.S. Congress.

More than 30,000 Chicago workers took to the streets to protest exploitive hours and unfair wages. During the third day of protests, Chicago police fired upon strikers outside a local plant, killing at least two. Once the protesters began their demonstration in Haymarket Square, an altercation between workers and police broke out, leaving dead and injured on both sides.

Analyzing why Loyalty Day rose in popularity over International Workers' Day, Jordan Grant of the National Museum of American History writes, "For many Americans at the time, the ‘Haymarket incident’ and the contentious public trials that followed sullied May 1, forever tying the day to anarchists, socialists, and other ‘radical’ groups that stood outside the mainstream of American society."

The exact purpose of the Loyalty Day holiday is as follows: "Loyalty Day is a special day for the reaffirmation of loyalty to the United States and for the recognition of the heritage of American freedom," according to Legal Information Institute at Cornell University Law School.

In an excerpt from LNP's reporting on Loyalty Day festivities in 2004, the holiday was described as a "response to the Communist day called May Day."

The public fear of communism, coupled with the narrative surrounding the purpose of International Workers' Day, gave way to Loyalty Day becoming to prominent national holiday on May 1.

As the national holiday grew in popularity, communities across the nation began holding celebrations to commemorate veterans of the U.S. armed forces, mostly through parades that marched through town squares.

The first official Loyalty Day Parade in Lancaster County was held in Manheim on April 29, 1967. Following the parade, a speakers' program was held at Manheim Central's Memorial Field. The program featured a speech from one Manheim resident who was a naturalized citizen of the U.S. and a native of England.

To read our original reporting from the first Loyalty Day Parade, click here.

The turnout for the first Loyalty Day Parade in Lancaster County wasn't as great as some expected. Approximately 200 to 250 people attended the program at Memorial Field.

The small crowds didn't last, though.

The following year, more than 2,000 residents marched along the streets of Manheim, while several more thousand applauded and cheered as they marched by. It was at least "twice as large" as the first annual Loyalty Day Parade, according to LNP's reporting at the time.

The second annual parade was capped off at Memorial Park, where a youthful Army lieutenant, who had just returned home from the Vietnam War, spoke to a crowd of about 500 residents. "Vietnam, while it is a large, costly, and difficult problem, is a just cause and a job which America must see through because it's vital to world peace," the young Army lieutenant stated.

In 1969, Lancaster city held their own Loyalty Day Parade, with over 20,000 spectators and 60 units marching. An excerpt from LNP's reporting of the event reads, "The parade got its message across too -- loyalty to the nation in which we live, and to the ideals which keep us free."

The same nationalism sentiment wasn't as widespread in the 1970 Loyalty Day Parade.

Pockets of residents who opposed the Vietnam War were spread across the parade route, occasionally chanting "peace now" and throwing up the peace sign as units marched by. One resident stated, "I think it's the biggest mistake [President] Nixon ever made," referring to the President's declaration to send more American troops to attack North Vietnamese supply centers in Cambodia just days before the parade. "We should let the guys come back. We shouldn't be there in the first place."

To read the original reporting from the 1970 Loyalty Day Parade in Lancaster, click here.

Tensions among the crowd grew at the following year's Loyalty Day Parade in Lancaster city.

A group of war protestors, most of whom identifying as Franklin & Marshall College students, caused disruptions during the annual parade in 1971. "Standing on the sidewalk in front of North Museum, the group read from the little red book of 'The Thoughts of Chariman Mao,' waved a pair of Viet Cong flags, and even shouted a few obscenities as the parade began. One young man read, in a loud voice, 'Patriotism is the last resort of the scoundrel,'" an excerpt from LNP's reporting of the event reads.

As the parade continued, four of the war protestors, two of them carrying Viet Cong flags, fell in behind the marchers. They chanted "Mao Tse Dong" as they marched alongside Boy Scouts, according to LNP's original report of the incident.

This didn't sit well with most of the parade viewers. One young man, identified as Joseph J. Ellenberger, became so enraged by the protestors actions that he ran into the parade route and tried to take the flags away from them.

Another F&M student entered the fray to defend the flag bearers from Ellenberger. While the two flag carriers disappeared into the crowd, the F&M student who defended them and Ellenberger were both arrested and charged with disorderly conduct.

To read the original reporting from the 1971 Loyalty Day Parade in Lancaster city, click here.

Despite the protestors capturing most of the attention during the 1971 parade, the following year saw "upwards of 50,000 persons" in attendance, according to LNP's reporting of the 1972 festivities.

The 1972 Loyalty Day Parade was dubbed "the best we've ever had" by Herbert C. (Bud) Mearig, the event's general chairman. Some of the city's police called it the "largest parade Lancaster has had in recent years."

Although the Vietnam War was still being fought, there were no disruptions from war protestors during the parade in '72.

To read the original reporting from the 1972 Loyalty Day Parade, click here.

Through the 1980s and into the 90s, Loyalty Day Parades became a fixture in Lancaster city. They grew in size and garnered more attention from the public with each passing year.

With the increasing size came an increasingly big financial burden for the city. Some believed the longstanding tradition would not see it's 29th anniversary in 1995 due to a lack of sponsors.

LNP's editorial board at the time urged to keep the tradition going, writing, "While it can be argued that not all traditions are worth preserving, the Loyalty Day Parade is one that deserves to be saved. It brings people together, it raises spirits and creates a sense of community that is often lacking in today's world."

With community support and financial contributions from Lancaster residents, the 29th annual Loyalty Parade went on as planned.

Loyalty Day celebrations continued into the early 2000s, but financial restraints continued to hinder the annual tradition. Despite the country being swept up in nationalism following the 9/11 attacks on the World Trade Center, Eugene Rutherford, the Loyalty Day Parade committee chairman, announced there would be no celebration in May, 2002.

"We didn't cancel the parade," Rutherford said when announcing the tradition's cancellation. "The parade canceled itself. We wanted to retire it with dignity."

Organizers for the parade cited cost, falling attendance, and difficulty attracting performers and volunteers as the main reasons for the parade's cancellation.

It was the first time in 34 years that Lancaster city did not host a Loyalty Day Parade.

To read the original reporting from the Loyalty Day Parade's cancellation, click here.

With the help of public funding and an abundance of volunteers, the Loyalty Day Parade was reborn as the American Spirit Parade and took place on April 30 of 2005.

Lancaster County twin sisters Kay Knight and Kathy Hummel approached Lancaster city Mayor Charlie Smithgall in 2004, urging the mayor to consider holding the Loyalty Day festivities again. With their enthusiasm and passion to bring the parade back, Mayor Smithgall agreed to jump-start the revival, placing both of the sisters in charge of organizing the celebration.

Floats, high school marching bands, and antique cars rode along the 2.2-mile route throughout Lancaster city. Despite the rainy weather, residents sheltered in their porches or under awnings as the parade participants marched past.

Click here to read the original reporting from the inaugural American Spirit Parade.

Since then, there haven't been any American Spirit or Loyalty Day Parades held in Lancaster city.

The parade took on many different shapes and forms over the decades. And it represented a different purpose for nearly everyone who attended and marched in the parade.

Learning the etiquette do's and don'ts for a business lunch, circa 1996 [Lancaster That Was]

Elva Stauffer, owner of the Cloister Restaurant in Ephrata from 1973 to 2019, passed away on…

7 stories about the Titanic that sank 109 years ago today, including the story of a local notable passenger

One hundred and nine years ago this month, an allegedly unsinkable ship - the largest, most …

In the early 1990s, Lancaster County was shaken and captivated by two murders that took plac…

Four veteran brothers reunited in 1946; the Grateful Dead played F&M in 1971 [Lancaster That Was]