This architect's drawing from 1953 shows the Monastery of the Immaculate Heart of Mary along Lititz Pike. 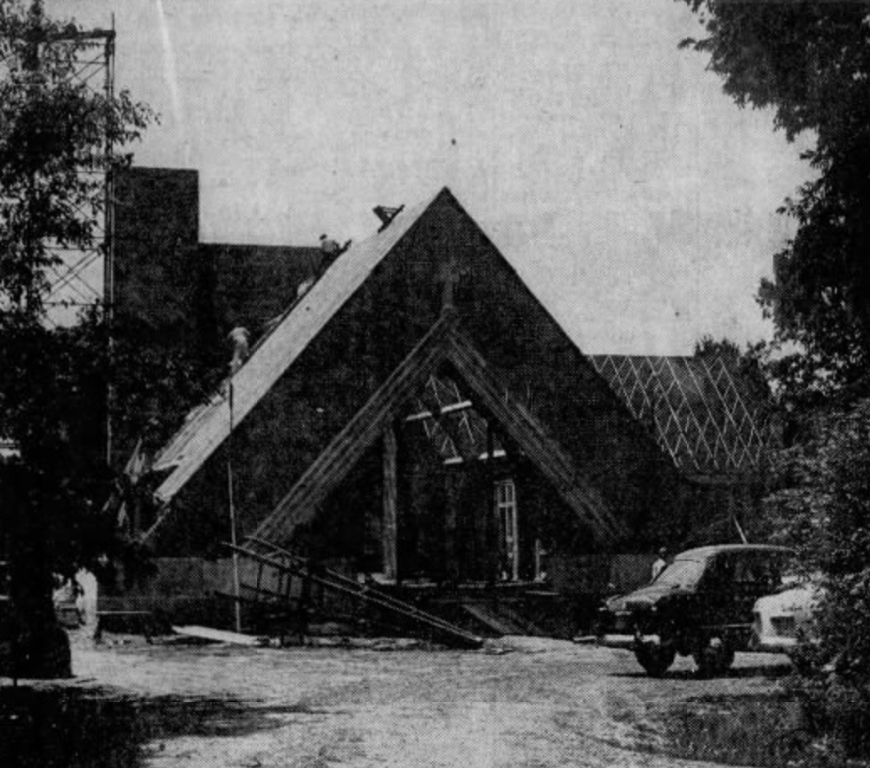 This photo from July 1954 shows the Monastery of the Immaculate Heart of Mary under construction. The project was about two-thirds complete. 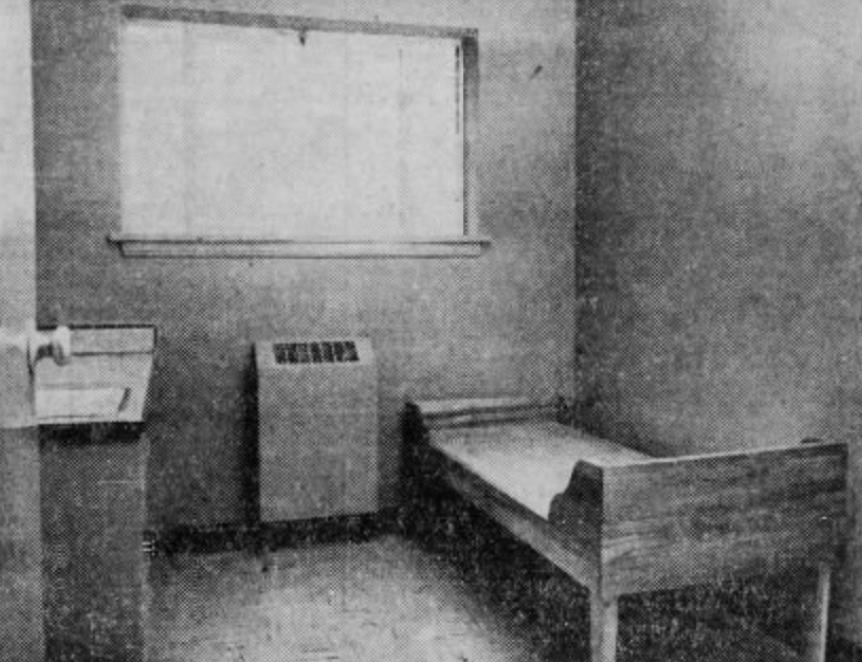 Prior to the monastery's opening in 1955, newspaper photographers were allowed in. This photo of a nun's chamber or "cell" was accompanied by a caption indicating that, because the enclosure ceremony was imminent, the room would never again be photographed. That prediction held true for decades - though in more recent years, such strictures loosened slightly. 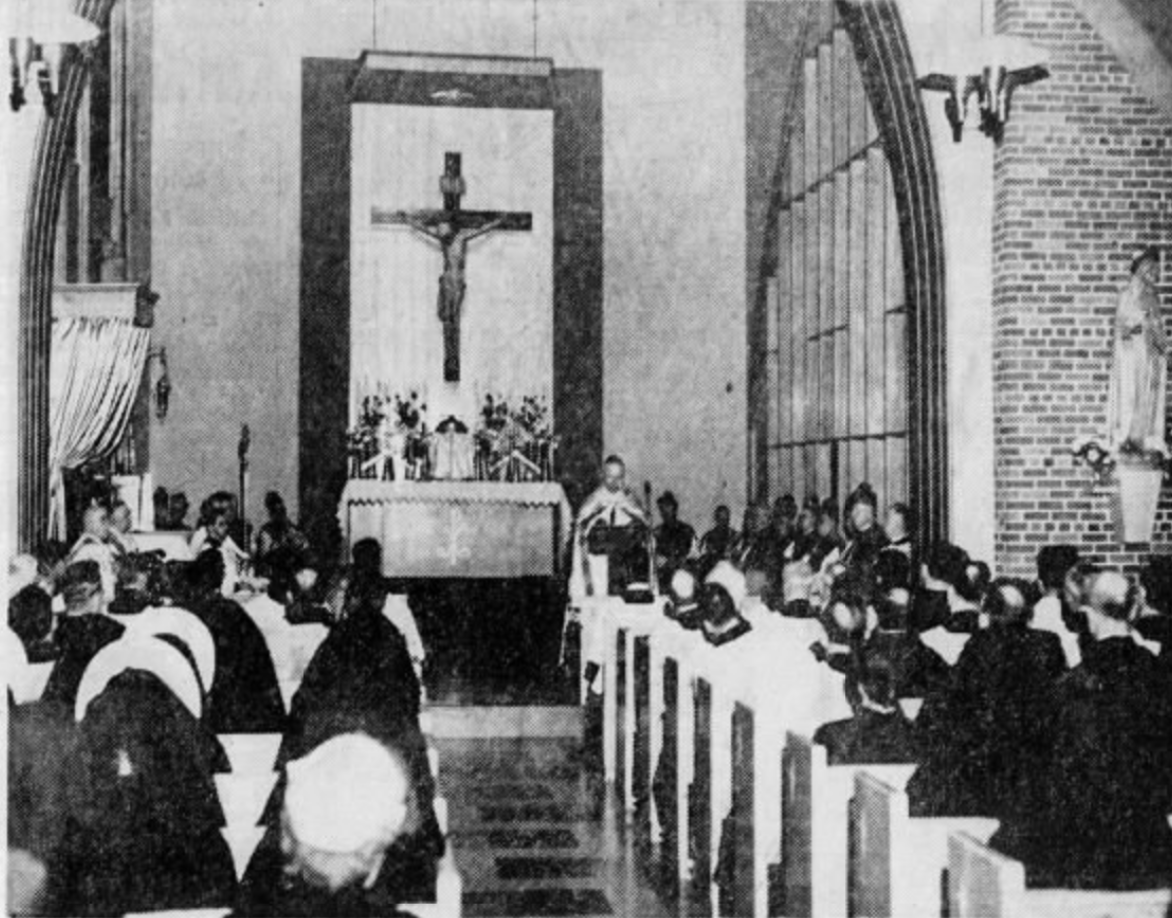 On May 22, 1955,  the new monastery building was formally dedicated and the ceremony of Solemn Blessing and Official Enclosure was conducted by the Most Rev. Amleto G. Cicognani in the building's public chapel. 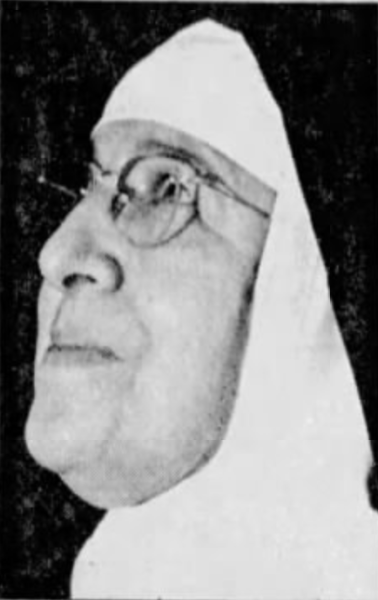 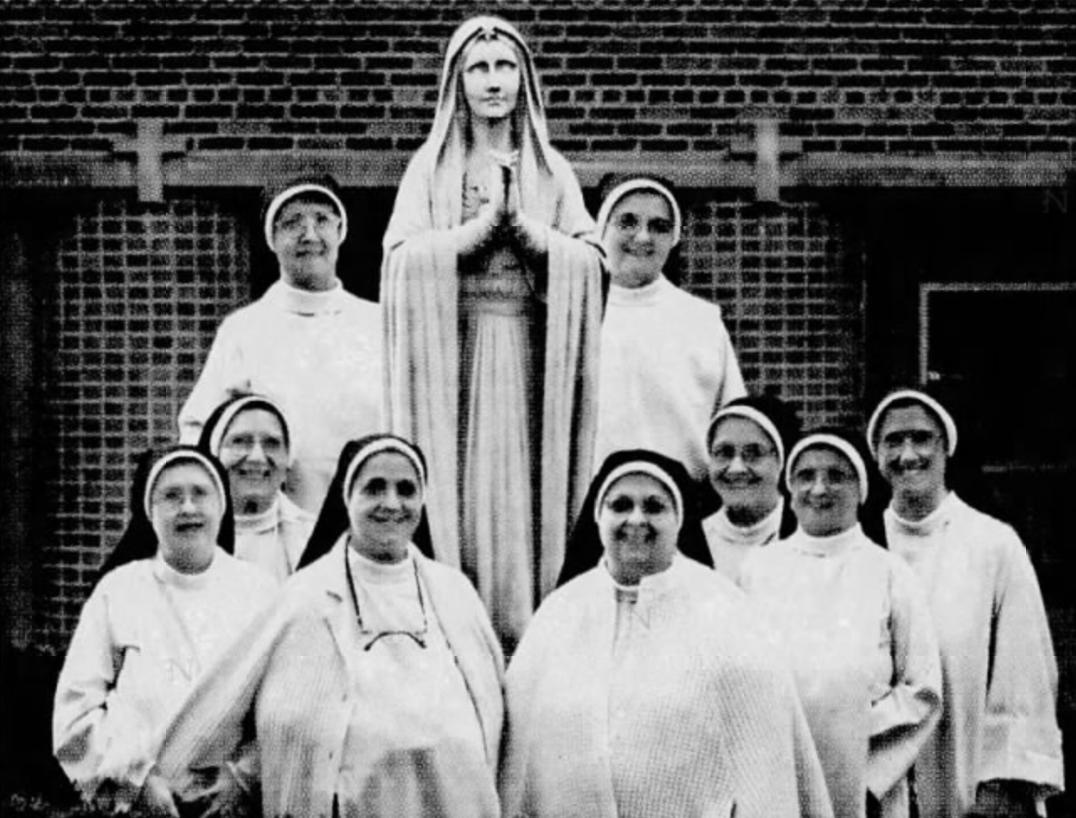 Dominican nuns of the Monastery of the Immaculate Heart of Mary pose for a photo in the monastery garden in 2003.

If you're a longtime Lancaster County resident, you've likely driven past it many times.

It's a tree-lined property along Lititz Pike, with a mid-century modern building visible from the road. The sign out front, though, is what may have piqued your curiosity.

"Monastery of the Immaculate Heart of Mary, Dominican Nuns of the Perpetual Rosary," it reads. Perhaps you wondered about the story behind this monastery and the order of nuns it houses.

With the recent news that the monastery will be closing, we took a look through the LNP | LancasterOnline archives to revisit the history of the property and the cloistered nuns who lived there.

Domincan nuns - also known as nuns of the Order of Preachers - trace their origins to 13th-century France. The Sisters of the Perpetual Rosary, a group of Dominican nuns who are dedicated to unceasingly praying the rosary, were founded in 1880, also in France. In 1891, the order established its first monastery in the United States, in Union City, New Jersey.

The monastery along Lititz Pike was originally located in South Enola, near Harrisburg, where it was established in 1925, eventually moving to the Lititz Pike location in 1953. It was the 13th monastery of its order in the United States.

The newspapers and the public were quite interested in the arrival of these nuns, who were the only cloistered order in the 15-county Diocese of Harrisburg.

On Jan. 22, 1953, the nuns moved into a home on the former Elmer Eshleman property along Lititz Pike, which the Church had purchased in the fall of 1952.

The home had been remodeled to include not only living quarters for the nuns but also small public and private chapels. However, it was intended only to be a temporary home, with a proper monastery to be constructed as soon as possible.

At the time of their arrival, there were 18 Sisters in the monastery. Upon leaving their South Enola home, they first traveled to St. Patrick's Cathedral in Harrisburg for a service, then went on to Lancaster, visiting the St. Joseph's cemetery - where the remains of deceased Sisters of their order had been moved from South Enola - before finally settling in at their new home along Lititz Pike.

By the end of the next year, contracts had been awarded for construction of the new Monastery of the Immaculate Heart of Mary. The contemporary design was done by Starr and Long architects of Harrisburg, with assistance from Fred Krug of Lancaster.

Days later, on Jan. 5, 1954, a groundbreaking ceremony was held, with the Rev. George Leech, Bishop of the Harrisburg Diocese, blessing the site and turning the first spade of soil. The new monastery was expected to cost about $450,000.

Progress on the building project was covered in the newspapers - here's a photo and brief construction update from July 1954, with the monastery about two-thirds finished.

As work neared completion in April 1955, newspaper photographers were allowed in, and articles like this one fed the public's curiosity about the monastery.

A month later, just before the enclosing ceremony which would shut the monastery off from the outside world, the public was invited in for a series of three open house days, and hundreds of people - the faithful and the curious - turned out to see the new building.

They were able to personally inspect not only the chapel and courtyard areas, but also the tiny bedrooms, or "cells," in which the Sisters would reside. After the enclosing ceremony, all areas except the public chapel and the visiting parlors would be off-limits to outsiders.

On May 22, 1955, the new monastery building was formally dedicated and the ceremony of Solemn Blessing and Official Enclosure was conducted by the Most Rev. Amleto G. Cicognani, Apostolic Delegate to the United States of America.

More than 100 nuns, 50 priests and 11 monsignors from the Harrisburg Diocese participated in the rites. The Dominican Sisters observed the ceremony from their own private chapel, located at right angles to the public chapel and separated from it by a metal grillwork symbolic of their cloistered lives.

Once the enclosing ceremony was complete, the nuns of the Perpetual Rosary began life in their new home, entirely out of the public eye - except for two of their number, who were tasked with interacting with the world in necessary ways, such as dealing with construction contractors or repairmen.

For the most part, the monastery disappeared from the pages of the local newspapers as well - except for annual promotion of the Christmas sales, in which the nuns raised money to support themselves by sending handcrafted items out for sale. Needlework and sewing were the primary means of support for the Monastery of the Immaculate Heart of Mary, though over the years other arts and crafts were created by the Sisters as well.

(This 1958 article mentions another religious job undertaken by the Sisters, aside from their primary task of ceaseless prayer: They baked all of the thousands of Communion wafers used each week in all of Lancaster County's Catholic churches.)

There was also a Dominican Monastery Auxiliary, a charity organization of Catholic women who, over the course of the 1960s, hosted a wide variety of fundraisers for the nuns, ranging from pinochle parties to canned food drives to full-on summer fashion shows.

Despite the intention at the enclosing ceremony that no public eyes would again see the inside of the monastery (indeed, one of the 1955 newspaper photos of a nun's chamber bears a caption indicating that the room would never again be photographed), as the decades went on the strictures loosened slightly.

In 1975, the first newspaper story about life in the monastery appeared in the Lancaster New Era.

The prioress and sub-prioress spoke - through a metal grill, of course - with a reporter about their day-to-day lives: How the need for incessant prayer was met by the 19 Sisters taking hourlong shifts around the clock. How their order encouraged whatever artistic aptitude a Sister might have, but in the service of God. How a short recreation period each day allowed the Sisters to break their accustomed silence with conversation and laughter. How, on especially rare days of recreation, the Sisters would enjoy bicycling, roller skating or playing ball.

(The 1975 article, like similar future stories, couldn't help but address the charming humor and wit of Mother Mary Thomas Aquinas and Mother Mary of the Immaculate Heart, the public faces of the order, whose tendency to make puns and jokes seemingly disarmed everyone who interviewed them.)

Even then, though, a topic was present that would increasingly become the focus of newspaper stories about the order: The dwindling number of applicants.

According to sub-prioress Mother Mary of the Immaculate Heart, in the wake of Vatican II - which from 1962 to 1965 served to significantly modernize and fundamentally alter the Catholic Church - interest in cloistered orders dropped dramatically. Before Vatican II, the Monastery of the Immaculate Heart of Mary had about one applicant a year. From 1965 to 1974, there were no applicants at all. One woman applied in 1975.

Two years later, a similar article ran in the Intelligencer Journal - this time, with a photo of the nuns at worship in their private chapel (the photograph was taken from the public chapel, however).

In 1983, the Dominican nuns were featured yet again as part of a larger New Era feature about the dwindling numbers of nuns throughout the Catholic faith. The private cemetery for the Sisters of the Perpetual Rosary held ever greater numbers of what the nuns called their "Silent Sisters."

Over time, obituaries for the Sisters became more frequent in Lancaster newspapers, and in 1991 the original prioress and founder of the Lititz Pike monastery, Mother Mary of the Immaculate Heart Ricco, died at the age of 91. Born in Nyack, New York, she was one of 17 siblings, and joined the Dominican Sisters in 1916.

By 2003, the sisters numbered just 11, but the strictures around the media had loosened once again - for that year's "slice of cloistered life" article, most of the remaining sisters posed for a photo in the monastery's garden.

In 2009, the Sisters sent their faith out into the world in a new way - via "Now and at the Hour," a CD of their sacred music, recorded by Cass Jendzurski, a member of the Fraternities of St. Dominic who organized the recordings and played accompaniment on the CD.

After 60 years of cloistered life confined to the five-acre grounds of their monastery, in 2013 the nuns of the Perpetual Rosary first spoke publicly about the possibility of closing the monastery. Membership had fallen into the single digits, and the nine remaining nuns hadn't welcomed a new member since 2002. Their average age was 70.

The Sisters had begun discussing what would happen if their numbers continued to fall - a likely event, they said,  given modern life's focus on secular things. Perhaps they would join another monastery.

But still, they were happy in their lives of prayer and quiet contemplation, and hoped to delay that eventuality for as long as possible.

Since 1960, Sister Mary Veronica has dedicated herself to a life of prayer strictly centered…

A few Sundays a year, worshippers at Donegal Presbyterian Church sing “Blest be the tie that binds,” a hymn about the fellowship found in faith.

What aircraft flies at 70 mph and uses a lawn chair for a pilot's seat? [Lancaster That Was]