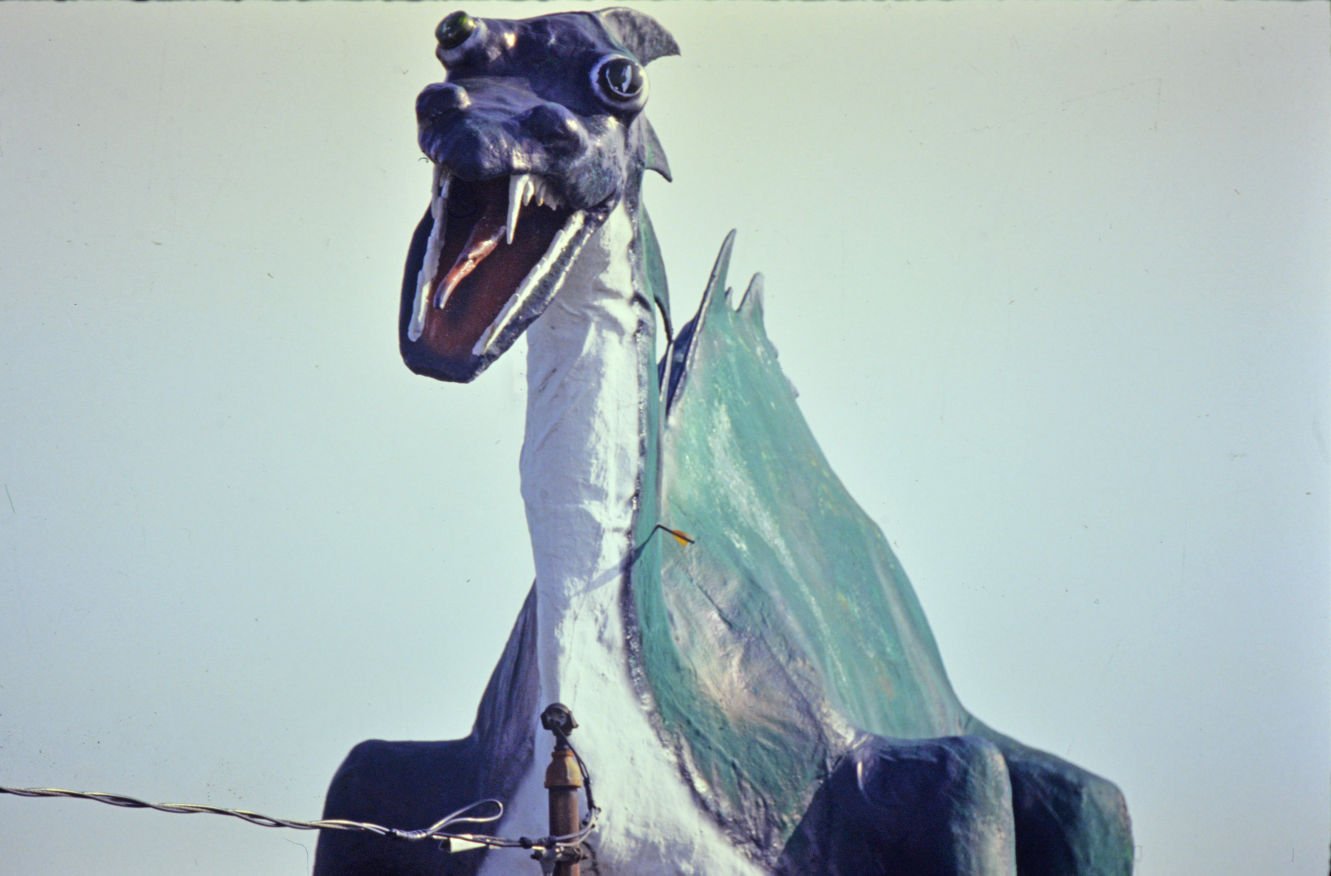 This is a file photo from November 10, 1988, of the dragon on the sign at the Green Dragon. 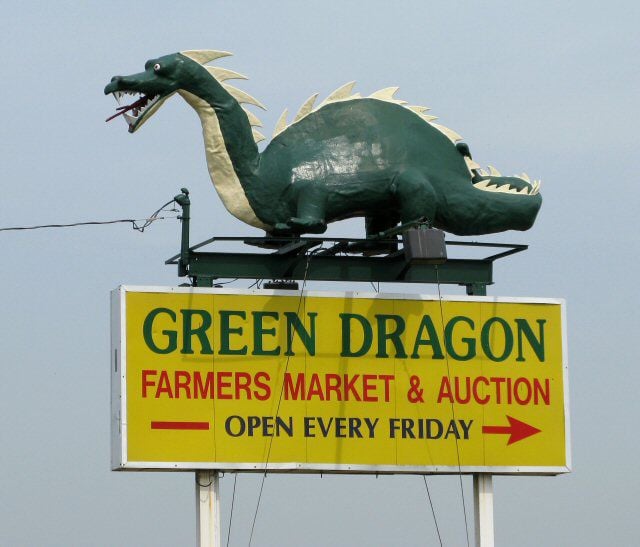 The Green Dragon sign has been an Ephrata-area landmark since 1964.

The famed Green Dragon sign was removed in 1993 to be repaired, refurbished and coated with protective fiberglass. 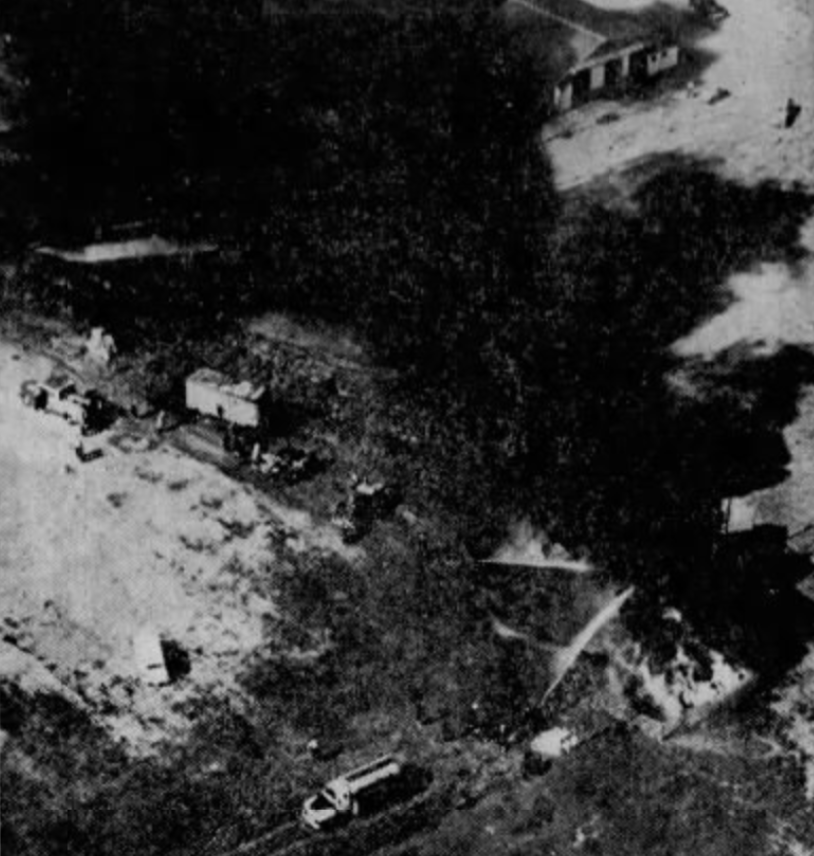 Thick black smoke rises from the Green Dragon in this 1961 photo, taken during a firefighters training exercise. 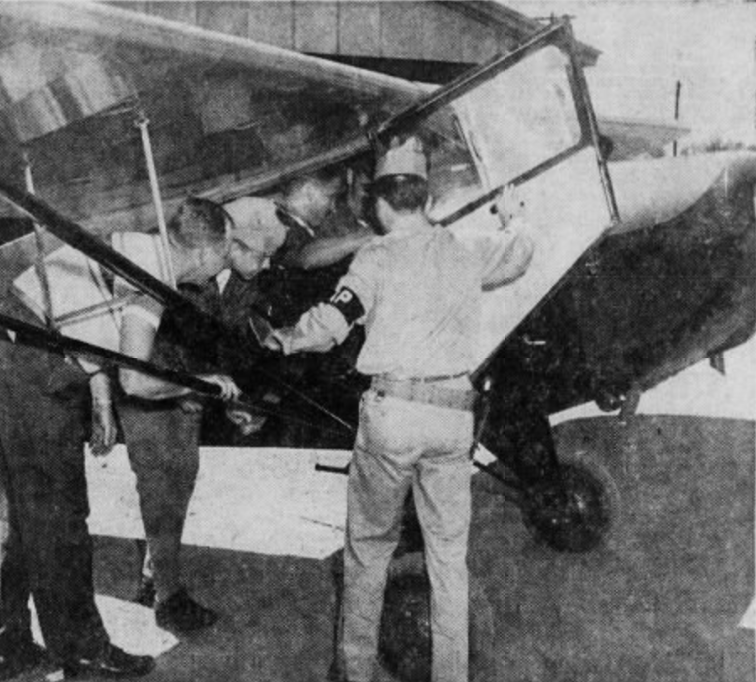 In 1951, during the Cold War, the Green Dragon was the site of an elaborate disaster simulation, including bombers dropping flour-filled "ordinance" on the market. Here, a "wounded" volunteer is preparing to be evacuated by airplane.

This is a file photo from November 10, 1988, of the dragon on the sign at the Green Dragon.

The Green Dragon sign has been an Ephrata-area landmark since 1964.

Thick black smoke rises from the Green Dragon in this 1961 photo, taken during a firefighters training exercise.

Love it or hate it, the Green Dragon Farmers Market and Auction near Ephrata has long been a Lancaster County landmark.

And plenty of people do love it - the market was recently voted the second-best farmers' market in the country by readers of USA Today.

While the market itself is more than 80 years old, the history of the location - and the name - stretches back nearly a full century.

We decided to take a look into the LNP | LancasterOnline archives (and the Journal of the Lancaster County Historical Society) to see what interesting nuggets of Green Dragon history we could unearth.

1. The first business there was an auto repair shop

The first owner of the Green Dragon - or the Ephrata Farmer's Market and Auction, as it was originally known - was Noah Burkholder, who opened the market in the spring of 1932. However, his involvement with the property stretches back to "sometime in the 1920s," according to a 1994 essay in the Journal of the Lancaster County Historical Society, when he opened an auto repair shop along Route 272 about a mile north of Ephrata.

That shop was the first known business to operate on the site of what is now the Green Dragon.

Burkholder gave up on his auto repair business after three years. He rented a portion of his property to Lottie Hess, who unsuccessfully attempted to run a restaurant there. Sometime in the late 1920s, he sold the property to John Schreck, who came up with a new use - and a new name - for the building.

2. The name was first used for a speakeasy

Once John Schreck had the property, he promptly turned the building into a roadhouse called the Green Dragon - a business which also served as a speakeasy during Prohibition.

The roadhouse was filled with Asian decor, and legend has it that Schreck borrowed the name and the look of the Green Dragon from a Chinese restaurant he visited in Atlantic City, New Jersey.

(There are also newspaper records of the Ephrata baseball team playing at a Green Dragon Field in the late 1920s; whether the field took its name from the roadhouse or vice versa isn't clear.)

Regardless of where the name came from, the speakeasy was well-known in northern Lancaster County, and was the site of a raid by Prohibition agents in March of 1930. About a pint of liquor and 814 bottles of beer were reportedly found on the premises. A year later, Schreck was sentenced in federal court to 60 days in prison.

When the Green Dragon roadhouse was shut down, original owner Noah Burkholder bought the property back, and in 1932 opened the Ephrata Farmers' Market and Auction on the site. But despite his desire for the market to be a fresh start for the troubled property, the Green Dragon name stuck colloquially - and eventually became official.

(John Schreck's story did continue, however. After both Prohibition and his prison sentence ended, he returned to Ephrata and opened a new tavern, simply called Schreck's, in 1937 - right across the street from the Green Dragon.)

3. A simulated bombing attack was staged there in 1951

In January 1945, Burkholder sold the property once again, this time to Paul Stoner, who quickly and dramatically increased the size and scope of the market.

No longer the realm simply of vegetables, livestock and farm equipment, now anything from appliances to construction tools to literally the kitchen sink could be bought there, and more entertainment was offered as well.

Also at this time, the market became the site of annual firefighter training. Large fires were deliberately and carefully set at the market so new equipment and techniques could be practiced by Lancaster County's fire companies. This practiced continued for decades.

In 1951, however, the Green Dragon hosted an even more dramatic Cold War exercise - a massive disaster training drill.

A formation of Civil Air Patrol planes flew over the area, and targeted the Green Dragon's spacious parking lot with their "bombs" - containers of harmless flour.

In the aftermath of the "airstrike," sirens wailed, emergency vehicles swarmed the roads of northern Lancaster County, and dozens of doctors, nurses and emergency personnel tended to hundreds of "wounded" volunteers, while controlled fires near the bomb sites filled the air with black smoke.

"If the thousands of spectators that saw Operation Disaster today realized that they would be the victims tomorrow, if we had an atomic attack, there would be more interest and activity shown by the public in our national defense program."

In 1961, the market was sold again, this time to John Hamaker, who turned management of the still-growing market over to Larry Loose and William Rohrbach.

The Green Dragon now encompasses more than 30 acres, with countless buildings housing food and merchandise of all types.

But if there's one image that represents it, it's the 7-foot-tall, 15-foot-long fire-breathing dragon that adorns the roadside sign.

The original dragon was built for a parade float in 1961, and was mounted atop the sign three years later. Since 1964, the green beast has overlooked Route 272 - though according to the Journal of the Lancaster County Historical Society, its original flashing red spotlight eyes were turned off thanks to a zoning violation.

The dragon was repaired and repainted many times over the years, but in 1993, the somewhat decrepit creature was taken down for a more thorough refurbishment, including being coated in a quarter-inch layer of durable fiberglass.

Like the market itself, the dragon was ready for at least several decades more history.

The building at 201 W. Orange St., at the corner of Orange and Water streets right in the he…