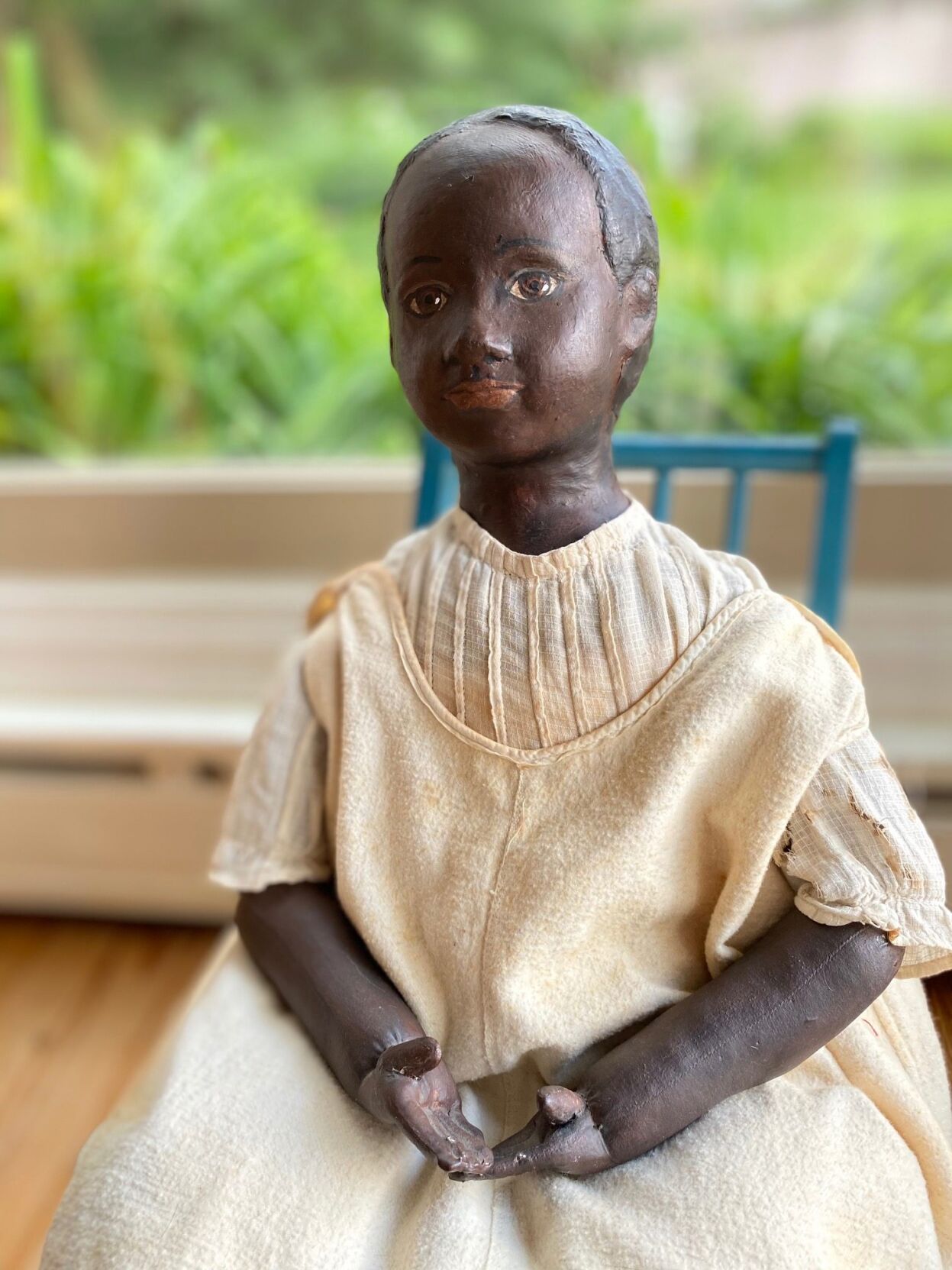 Mary Ellen commissioned this doll from Shari Lutz of Strasburg. It is Lutz’s interpretation of an Izannah Walker doll. “She just captures faces so nice—I just love her faces!” said Mary Ellen. 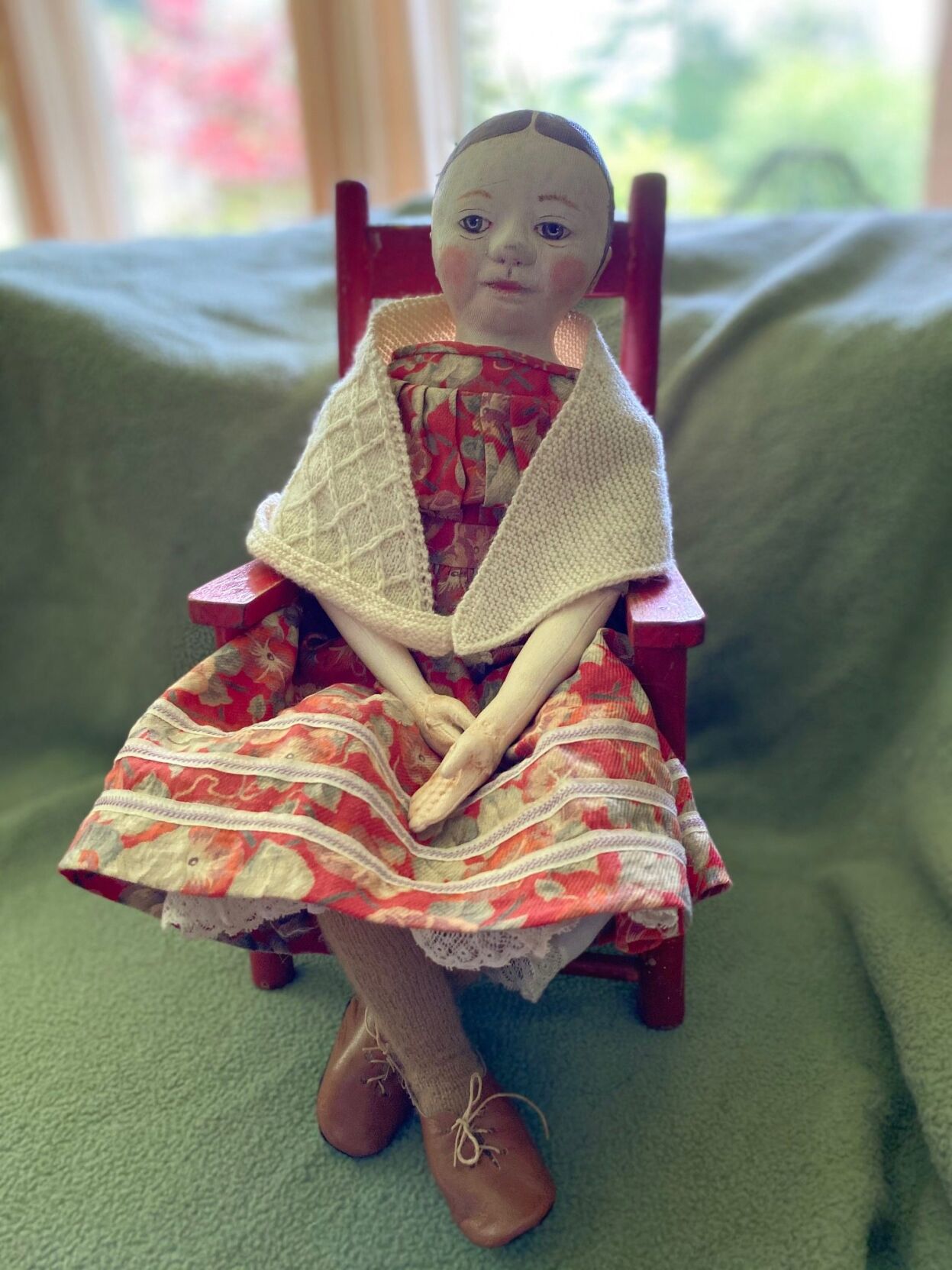 Mary Ellen Brubaker created this doll based on Izannah Walker’s work from the 1860s. It is stockinette (pressed mold) and oil painted. She made the clothes, including the shoes, even knitting the shawl and stockings. 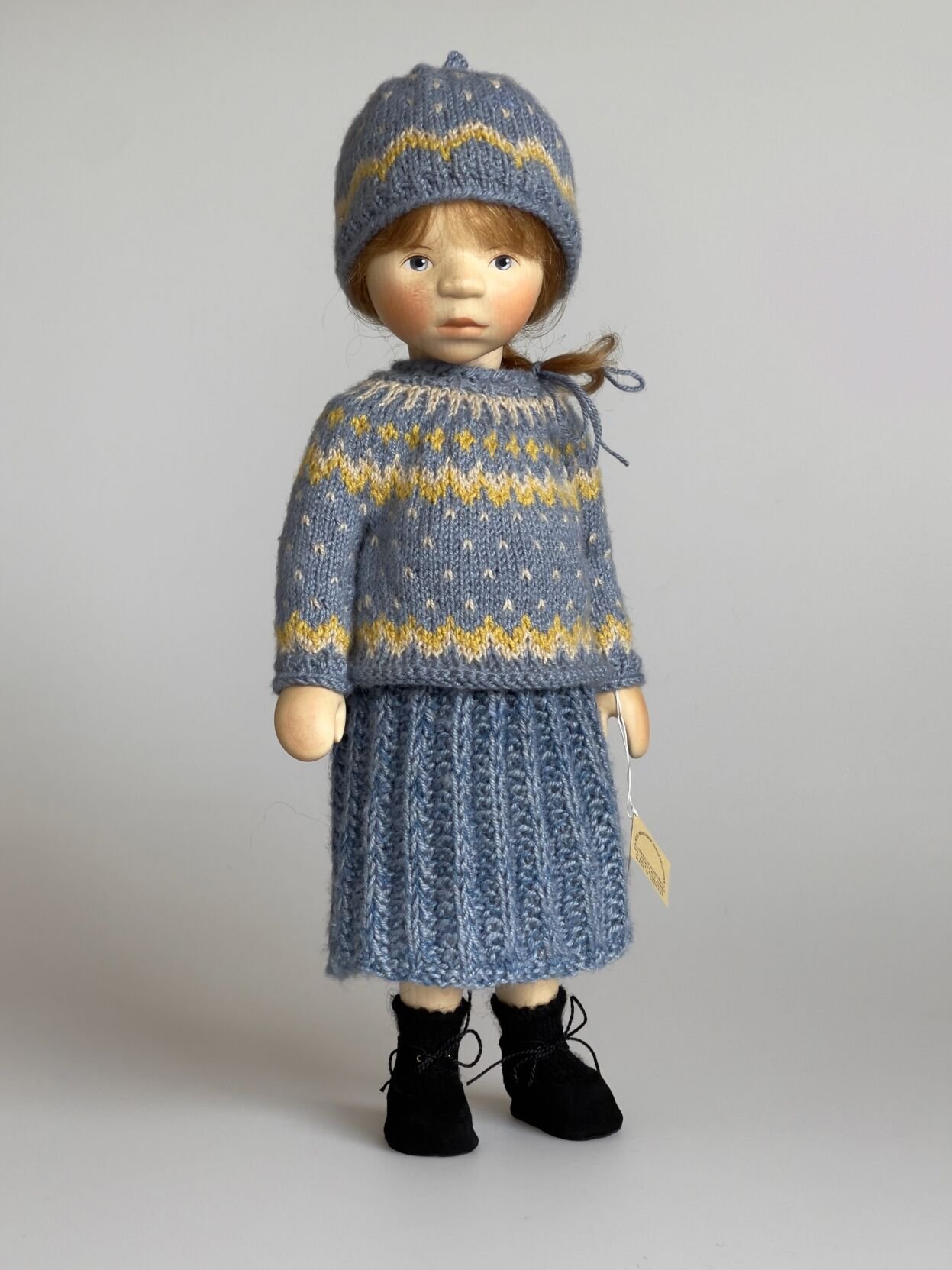 Mary Ellen commissioned this doll from Shari Lutz of Strasburg. It is Lutz’s interpretation of an Izannah Walker doll. “She just captures faces so nice—I just love her faces!” said Mary Ellen.

Mary Ellen Brubaker created this doll based on Izannah Walker’s work from the 1860s. It is stockinette (pressed mold) and oil painted. She made the clothes, including the shoes, even knitting the shawl and stockings.

Whether based on books, films, famous people, or practical homespun creativity, there’s no shortage of artistry behind collectible dolls. Children have used dolls for centuries for solace, imagination, and adventure. For collectors, dolls are often an appreciation leaning toward obsession.

“I had a play doll and the rest were on shelves,” explained Stephanie Carbaugh, a second-generation enthusiast who has passed her knowledge and passion for doll collecting onto her daughter, Mia. “Dolls are common around the world and date way back-they are pieces of art children played with.”

She said dolls show what the people are into. Back in the day, “‘Wizard of Oz,’ Shirley Temple, etc. were all inspiration for dolls.”

There are many different entry points to doll collecting: pursuit of personal nostalgia; a delightful yard sale find; an interest passed down through generations; an admired doll artist; and for others, getting their first Shirley Temple doll ignited a lifelong passion.

No matter what drew them in, doll collecting continues to bring joy, excitement, and a sense of community. And often a handy profit.

Doll collecting is not child’s play. According to the United Federation of Doll Clubs, there are nearly 400 clubs across the country, and 20 in Pennsylvania. Lancaster is home to the Red Rose Doll Club, with about 30 enthusiastic members, including mother-daughter duo Stephanie and Mia. While doll collecting is largely a female-dominated field, a handful of men also partake, like the outgoing president of Lancaster’s doll club, Herb Radlbeck.

Radlbeck and his husband Jim Ditzler are charter members of the 25-year old club and ardent collectors. Ditzler, 77, explained that they are in the process of “downsizing from around 4,000 collectible dolls to 200, as they are moving into a retirement home.” It made for a busy and profitable auction, but he did hang onto the doll he plans to be buried with when the time comes.

Ditzler said he has a particular passion for the German-made JDK all-wooden dolls with spring-loaded joints as well as “ragdolls made by artists” as opposed to corporations. He has at least 15 felt and cloth dolls made by local artisan Mary Ellen Brubaker, another longtime member of the doll club.

Mary Ellen is both collector and maker of dolls.

“I started out making bears, then I wanted a Goldilocks for the bears,” which catapulted her into doll making, she says.

Her skills as wood carver, mask maker, needle felter, seamstress, and painter combine to make her dolls charming and extraordinary, from their handmade, old fashioned clothing to their expressive, hand-painted faces. Many of her dolls are interpretations of doll makers she admires like Steiff, with its characteristic seam down the face and Izannah Walker, who was one of America’s earliest known female dollmakers. Many doll club members have purchased her creations.

Mary Ellen used darker felt for dolls to better resemble her rich-complexioned granddaughters and has several bisque (a type of antique unglazed tinted porcelain) and cloth Black dolls. She appreciates so-called character dolls, which have realistic, natural facial expressions. And she doesn’t collect “smooth-eyed” dolls where a decal is used, but goes for intaglio eyes, which are lightly carved.

“What I create and sell, I save to buy a doll,” she said. Mary Ellen mostly collects artist-made cloth dolls to support women’s cottage industry. “It’s what I love,” she said.

There are as many types, techniques, and variables to dolls – and their accessories – as there are collectors. Eyes, hair, mouth open or closed, age, gender, mobility, clothing, backstory, etc. all play into a collector’s preferences. Doll collecting has its own colorful lexicon – words like intaglio, bisque, lilliput, starfish hands, and countless other terms – that describe a doll’s style, creator, and era for those in the know.

Red Rose Doll Club members are eager to learn and share their knowledge. Stephanie said club meetings usually have an educational presentation. Past topics include how medicine was smuggled inside dolls during the Civil War, dolls from China, and the history of specific doll artists. Mia gave her talk on dolls in literature.

The youngest club member, Mia, 20, has been attending meetings with her mother since she was a toddler. She has well over 20 dolls in her collection, mostly European modern dolls-wood or vinyl. She said she has always enjoyed dolls, “as artwork, not so much playing with them.”

She also appreciates Pongratz dolls, which are made of wood with moveable arms, legs, and head and are clad in knitted outfits and have expressive hand-painted faces. They are pricey, and Mia explained how in some cultures, children get one single, high-quality doll for their childhood and “not the consumerism here with getting lots of dolls” for every occasion.

While some dolls are quite valuable – the world record for a doll sold at auction was $400,000 in 2014 – the true worth for collectors is a deep appreciation of the art form, and delight that a coveted doll-or doll collection-brings every day.

“I never got over liking dolls and antique toys,” said Eleanor Brubaker (no relation to Mary Ellen) at a recent doll club meeting. She enjoys her doll houses now, as she didn’t have one as a kid.

One collector, who didn’t want to be named, has been collecting since she got her first Shirley Temple doll at age 11. Soon, she wanted an older version. Now, several decades later, she buys and sells at flea markets “to make money to feed my collection,” she said laughing.

Doll collectors are enthusiastic about their preferences, and take pride in their careful acquisitions.

“After I’m gone, my kids will be well taken care of after selling my collection,” Mary Ellen said. “but until then, I want to enjoy them every day of my life.”

Over the years, I have appraised more than my fair share of collectibles, art and antiques t…

Antique toolbox: Can you guess what this implement was used for?

Do you know what this mystery tool, from the collection of the Landis Valley Village & F…

Want to join a doll club? Check out the United Federation of Doll Clubs' website at ufdc.org, or email Lancaster's Red Rose Doll Club at piefer@comcast.net

Upcoming Event: The 72nd Annual Doll Convention will be in Baltimore, Maryland July 19-23.