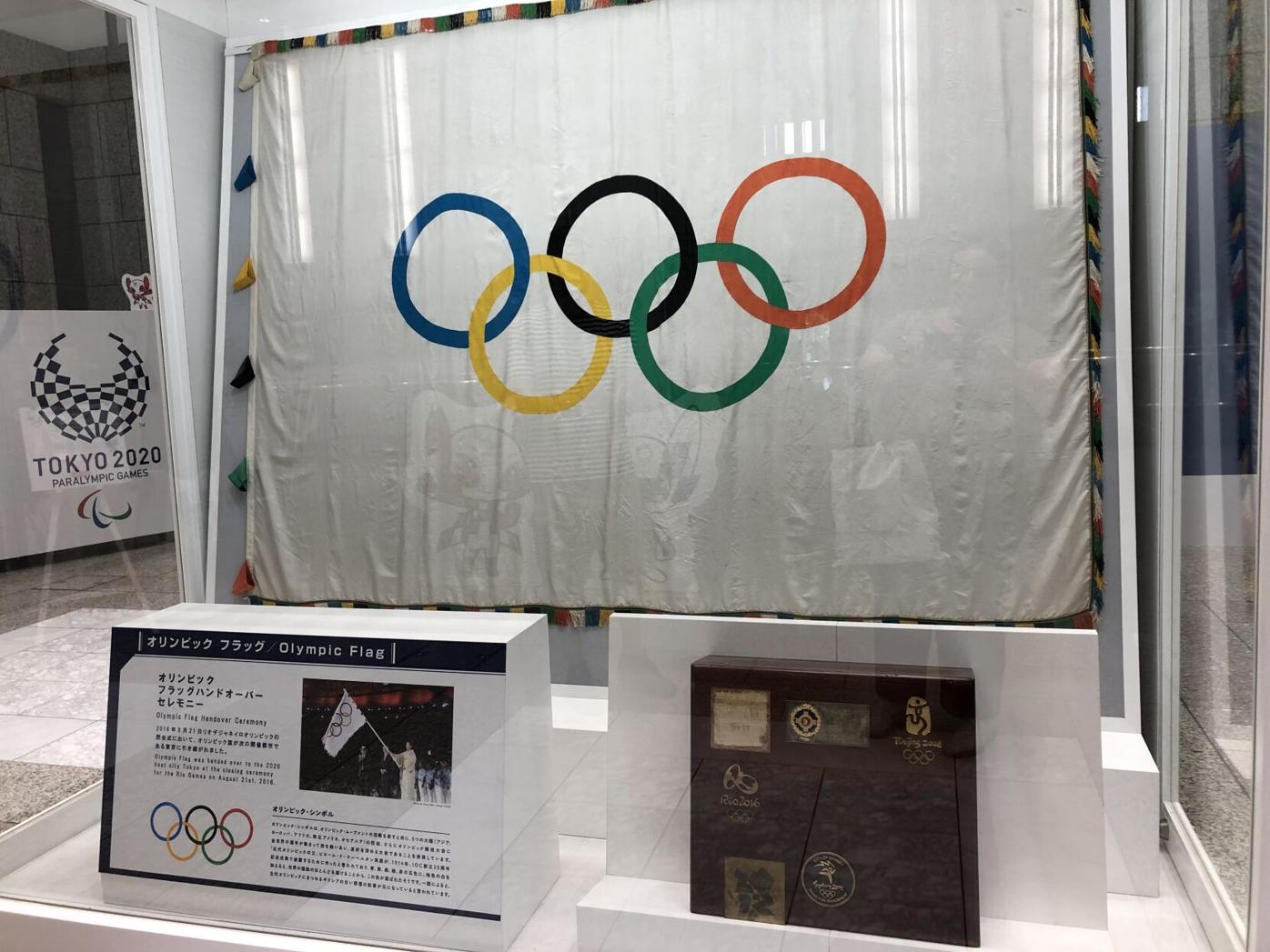 This Olympic flag was on display last year in the government building in Tokyo, Japan. 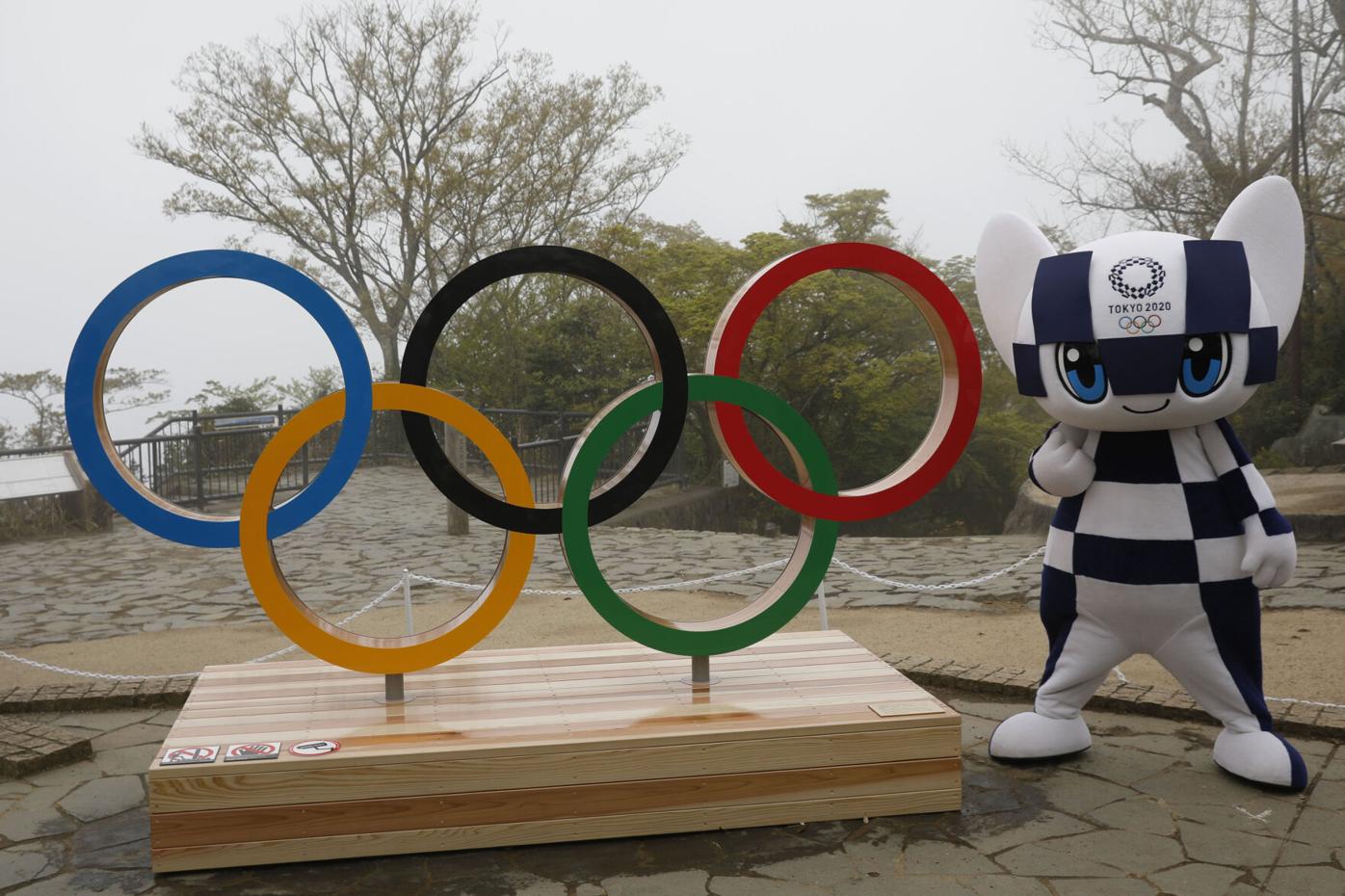 Tokyo 2020 Olympic Games mascot Miraitowa poses with a display of Olympic Symbol after unveiling ceremony of the symbol on Mt. Takao in Hachioji, west of Tokyo, Wednesday, April 14, 2021, to mark 100 days before the start of the Olympic Games. (Kim Kyung-Hoon/Pool)

This Olympic flag was on display last year in the government building in Tokyo, Japan.

Tokyo 2020 Olympic Games mascot Miraitowa poses with a display of Olympic Symbol after unveiling ceremony of the symbol on Mt. Takao in Hachioji, west of Tokyo, Wednesday, April 14, 2021, to mark 100 days before the start of the Olympic Games. (Kim Kyung-Hoon/Pool)

On a recent trip to Tokyo, my experience suggested the great Japanese city was quite prepared to host the world even in the aftermath of a global pandemic. Shops were brimming with Olympic items and in Tokyo’s main and impressive government building, there has been a fine exhibition about the history of the Olympic Games.

The exhibit, geared to the general public, features the Olympic Flag and the Tokyo 2021 mascots for the summer Olympic and Paralympic Games. The exhibit has helped visitors learn about the history of the Olympic Games through signage and other didactic displays.

Special items include the opening ceremony jackets worn by members of the Japanese Olympic team. These pieces of clothing were available at the exhibit and the jacket design was based on a traditional Asian kimono jacket, or haori, with an open front and large sleeves. Along with the haori jackets in blue and white, the exhibit featured life-size stuffed animal mascots for the Olympic and Paralympic games and photo areas for Olympic-themed selfies.

The highlight of the exhibition was the display of the beautiful and inspiring Olympic flag. The Olympic flag is raised at the opening ceremonies and waves throughout every Olympic Games. The flag was last handed over to Tokyo at the conclusion of the 2016 Rio Olympic Games. The flag features the colorful and highly recognizable Olympic rings design on a white panel with fringe of the ring colors surrounding the perimeter. The flag was displayed in a large museum-style see-through display case along with its wood storage/traveling case decorated with engraved gold-tone metal plaques from the previous Olympic Games held in Atlanta in 1996; Athens, 2000; Sydney, 2004; Beijing, 2008; London, 2012; and Rio, 2016. I expect that the interior of the case is lined to archival standards with an appropriate museum-quality material that will keep the textile flag protected from the wood case’s off-gassing.

More than 2,000 mascot designs were submitted to the Tokyo 2021 Olympic Committee from Japanese artists. Designs were narrowed down to three finalists and the winner’s design was chosen by Japanese elementary school children by a nationwide classroom vote. Ryo Taniguchi’s Miraitowa mascot design won with 109,041 votes.

When it comes to Olympic Games collectibles, the market is most active about two weeks prior to the current Olympic Games and continues throughout the Games. If you are considering liquidating your Olympic collection, start your marketing efforts online now. Online sales will be active since this is a major international event.

For sellers, continue your marketing efforts throughout the Games and end your Olympic collectibles sales about one week after the Games’ closing ceremonies have occurred.

This will give you time to benefit from the worldwide press coverage associated with the events of this year’s Tokyo Olympic Games. By continuing the sales of your Olympic collectibles after the Olympic Games have closed, this will give latecomers a chance to buy your items.

With events like the Olympics and the sale of Olympic collectibles, you can’t expect buyers — online or offline — to be interested in these items weeks after the end of the competitions. So, ride the promotional wave during the Games and then give an extra week for buyers to purchase the leftover Olympic items.

By September of this year, the Olympics collectibles market, including the Tokyo Olympics, will cool significantly. After that, you’ll have to wait another three years for the next best sales opportunity of any Olympic objects.

With a Ph. D. from Penn State University, Lori Verderame is an award-winning antiques appraiser on History channel’s hit show “The Curse of Oak Island” — highlighting the world’s oldest treasure hunt, For information about your antiques and collectibles, visit www.DrLoriV.com and www.YouTube.com/DrLoriV .

In the back of the old Huber’s West End Market, there’s a makeshift market with bowls of kal…

You don’t need to invest in expensive products in order to protect, clean or display your fi…

Humane Pennsylvania shelters rescued 17 dogs from Puerto Rico; here's how you can adopt one

Humane Pennsylvania shelters recently rescued 17 dogs from Puerto Rico, and some of the anim…

It's BLT season: Here's where to get fresh tomatoes, bread and more in Lancaster County

Attention tomato lovers, please report to the kitchen sink for a very important message: The…

On May 26, 1962, at least two Lancaster County music institutions were officially born.

How to watch, stream Sight & Sound Theaters' 'Ruth' this Friday

Over the years, I have appraised more than my fair share of collectibles, art and antiques t…

About a week ago, a friend called me in a panic. She realized that her sump pump failed and …

Rembrandt van Rijn’s paintings are famous for their luminosity. When considering works by th…

It’s easy to spot obvious damage on your art, antiques and collectibles when you are conside…

The Lancaster Science Factory is putting some of its programs on wheels.

Baking has been a popular pastime for years. Among Mom’s china or Grandma’s baking dishes, collectors find cooking collectibles to have good d…

A Lancaster kid was a soap box derby star in 1971; Phish came to Hershey in 1996 [Lancaster That Was]