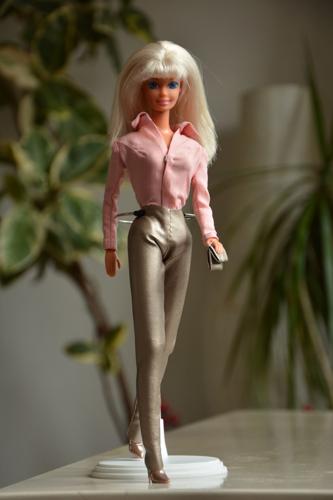 Mattel's Barbie doll is having a moment as a collectible, in part because of the upcoming "Barbie" movie. 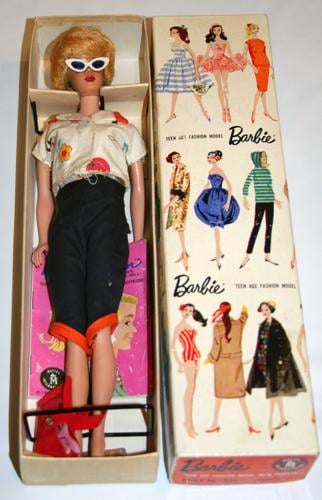 A Barbie doll is shown in its original box and with original clothing and accessories, adding to its value.

Barbie has been in the news lately ahead of the upcoming release of the “Barbie” movie.

Barbie, who was introduced in 1959 and skyrocketed in popularity in the 1960s, has made big strides in the collectibles market lately. The German Bild Lilli dolls, adult fashion dolls of the postwar era, first inspired Barbie to be born. These German dolls have skyrocketed in value in the auction market. Recently, a Bild Lilli doll sold for a whopping $5,000, making all the Barbie collectors sit up and take notice.

From where I sit, appraising 50,000 objects every year, this auction news about the German Bild Lilli doll predicts a big spike is on the horizon in the Barbie doll market ahead of the new Barbie movie.

The American Barbie doll market reacted with great interest in many early and vintage Barbie dolls made by Mattel Inc. Appraised values for vintage collectible Barbies are high, well into the thousands for just one doll.

The original 1959 Barbie No. 1, with her black-and-white striped bathing suit, still brings high values. Be sure to check the marks on a Barbie doll’s back or buttocks for information about the date your Barbie was made. Don’t disregard post 1990s Barbies, as they have value, too.

Barbie was a different type of doll, inspired by the Bild Lili adult fashion dolls that were popular in Germany. Teenage girls were not what traditional dolls typically looked like during the 1940s and 1950s. Prior to Barbie’s introduction, most dolls were baby dolls, china dolls or dolls geared to young children. Popular dolls did not depict teenagers and certainly not adults.

Barbie highlighted teen and young adult issues, an interest in contemporary clothing and the way young people thought about jobs and the future.

Barbie was different from other dolls of the era; she had her own character. She wasn’t a doll imitating other characters from literature or film. This is Barbie’s great appeal. Barbie was not following the pack; she was a leader and young girls and teens were attracted to this new doll concept.

The different Barbie concept made Barbie an unknown in the marketplace, and this gave market insiders pause. Such dolls were untested in the market but Barbie persevered. Quickly, it became obvious that the new doll concept put forth by Barbie was desirable. Buyers bought Barbie dolls. It was unexpected, but a great result for the new Barbie doll and its makers at Mattel Inc.

Barbie remains influential today because Barbie has adapted to changing times. The collectible toy market and major movies have kept Barbie in the front of people’s minds. Barbie has adapted to cultural and social changes of the decades from the 1960s to the early 2000s. She has had various careers and has even embraced new technology.

Mattel Inc. has done an excellent job of allowing Barbie to change with the times. Collectors or people hoping to sell a vintage Barbie doll should look for good condition, rarities and quality. Condition is most important when it comes to appraised value. Barbie dolls must have no stains, dirt or damage. Collectors like to collect dolls and also their accessories like clothing, shoes, sunglasses, etc.

With a Ph.D. from Penn State University, Lori Verderame is an antiques appraiser, author and award-winning TV personality who has appeared on the History channel’s hit show “The Curse of Oak Island.” She gives appraisal value information at DrLoriV.com and Youtube.com/DrLoriV or call 888-431-1010.

Art hanging 101: 9 things you should consider before hammering a nail

A room’s decor includes many components, from wall color and window treatments to furnishing…

A 'Godfather' fig and a numbing pepper tree: 5 unique edible plants you can grow in Lancaster County

Here are five unusual, edible plants you can actually grow in Lancaster County.

When is trick-or-treat night 2022 in Lancaster County?

Halloween draws near, which means it's time to mark on your calendar when you and your famil…

With enough plot twists and mysteries to satisfy most readers, the story of how The Lancaste…

8 events in Lancaster County to check out this weekend, from fall festivals to a film noir gala

Whether you're looking for some family friendly fun, or perhaps a night out on the town, Lan…

October First Friday: 26 exhibits, museums and events in Lancaster County to check out this weekend

Anytime is a good time to shop for vintage and antique objects, but if you are tired of the …

Antique toolbox: Do you know what this mystery tool was once used for?

Do you know what this mystery tool from the collection of Landis Valley Village and Farm Museum, was used for?

Since coffee is an age-old hot drink, coffee grinders date back to the 9th century A.D. As coffee served many people from diverse cultures wor…

Collectors like to rotate collections with frequency and display their stuff in various parts of their homes. Some collectible items only make…

Lancaster man was Broadway animal wrangler in 1972; 'eggless Thursdays' in 1947 [Lancaster That Was]