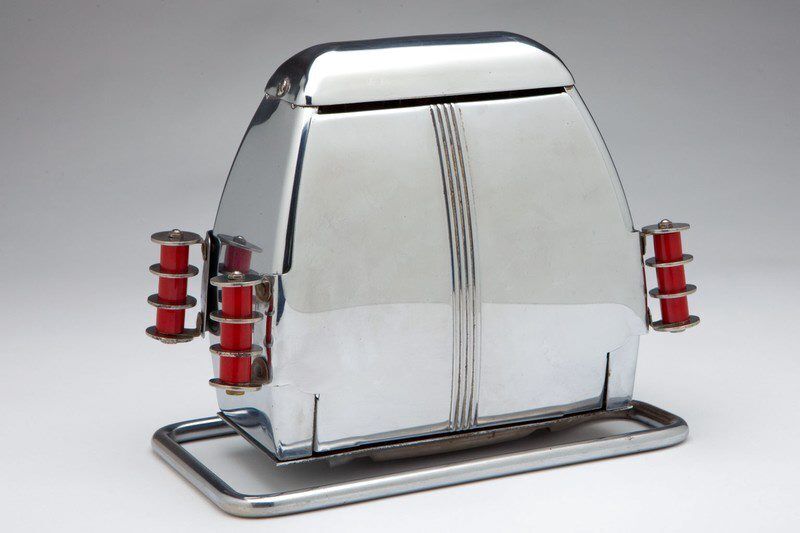 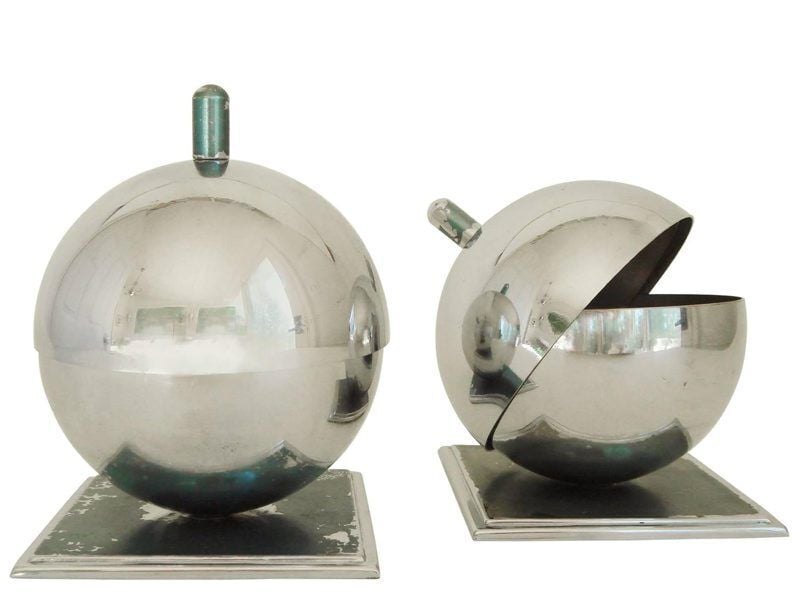 A pair of chrome globe ashtrays by Walter Von Nesen. 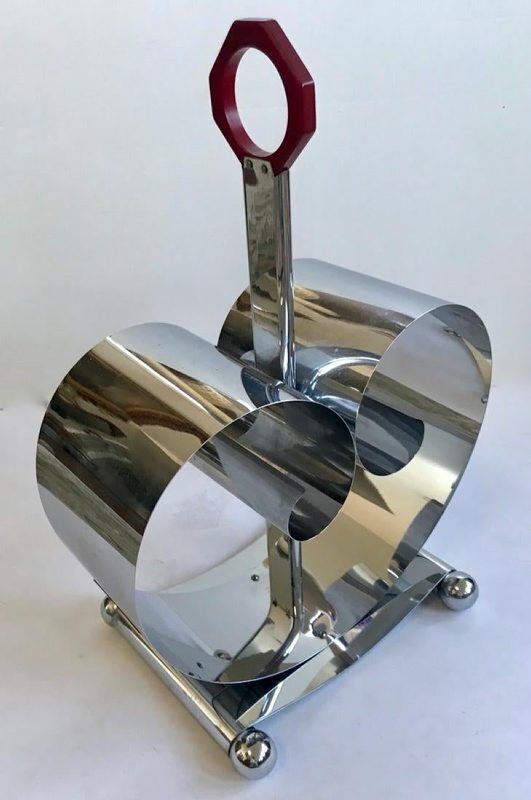 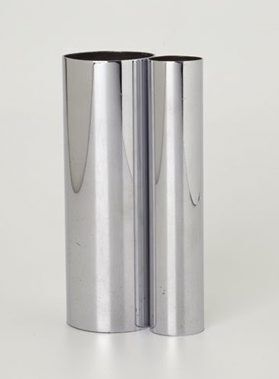 During the 1920s and 1930s, chrome items were referred to as “poor man’s silver.” Never mind that some of it was made in the art deco decades by some of the most important designers of the era.

From decorative accessories to everyday kitchen objects, it brightened the homes of young couples who couldn’t afford sterling silver and was a favorite wedding gift. In those days, most items cost only a few dollars. However, many pieces of decorative furniture, such as tables and light fixtures made by important designers, were pricey.

Historically, chrome was first made by the Chase Brass and Copper Co. in Waterbury, Connecticut. Authentic pieces are marked with a stamped figure of a centaur.

These chrome pieces entered the consumer market in the 1930s. They were first offered in the Chase specialty catalog in 1937. Not only did most pieces sell for $1 to $3, but they were designed by Russel Wright, Norman Bel Geddes and Rockwell Kent.

The famous “Manhattan serving set,” in the shape of a skyscraper, was designed by Bel Geddes. His cocktail shaker with eight cups and a tray originally was priced at $16.50. These days, it could sell at auction for over $3,000. Russel Wright’s double-tube vase is currently dealer-priced at $4,500.

Industrial designer Walter Von Nesen worked for Chase designing many figural items, such as elephant book ends. A humble ash tray designed by him can sell nowadays, dealer-priced, for $575.

Many pieces of decorative furniture combined chrome with glass. Gilbert Rohde designed many small pieces, such as side tables and consoles. Currently, a 1930s console table is dealer-priced at $3,999. Donald Deskey, another important designer, used chrome for a variety of objects, such as lighting fixtures. He is also famous as the designer of the interior of the Radio City Music Hall.

Ruth Gerth (1897-1952), a rare woman working for Chase with chrome, is known for her “glow lamp.” It is archived in the Cooper Hewitt Smithsonian Design Museum.

Popular these days, if you can find them, are pins, necklaces and bracelets that combine chrome and Bakelite.

By 1935, there were many makers of chrome items ranging from ice buckets to cocktail shakers. Most popular with collectors these days are the often whimsical shapes of cocktail shakers. Among them are a dumbbell, rooster and airplane. The airplane, by an anonymous maker, has sold for over $4,000.

Among other companies making chrome objects by the late 1930s were Revere, Kensington and Manning-Bowman. A popular item with collectors is the “Superlectric Toaster” made in the 1930s by Superior Electric Products in St. Louis. It combined chrome with red Bakelite handles and was a take-off of the streamlined locomotives of the 1930s.

What to look for

The art deco look can be recognized by stylized elements using geometrical forms, zigzags and chevrons. For its futuristic look, artists used vertical lines and geometric shapes, circles, squares and repetitive patterns. The Chrysler Building in Manhattan is a good example of using these elements. Bold colors were mixed with silver, black and chrome.

Beginning collectors should know there are many reproductions. They should also know the names of the many top designers, the types of pieces they designed, and the firms they worked for.

Judge a chrome piece by the quality of the design. Does it have the stylized look of the 1920s and 1930s? Is it rare? A good example of rarity would be any chrome objects designed by Rockwell Kent for Chase. He only designed three items. Condition is important since so many pieces are still around. If the object has plastic trim and handles, be sure it has no chips and cracks. If there are glass liners, they should be in mint condition.

A piece doesn’t have to be made by Chase to be worth collecting. Other firms hired name designers, too. Collectible chrome was also made in Sweden, England, France and other countries.

With the advent of World War II, when metals were needed, chrome was replaced by aluminum. It has made a comeback with new and interesting objects, as future collectibles.

Anne Gilbert answers readers’ questions on an antique pincushion, a scrimshaw and a cut glass bowl.

Autograph Books Were the Facebook of the Victorian Era

During the late 1800's it was considered fashionable for ladies to maintain autograph albums with inscriptions from one's circle of acquaintances.