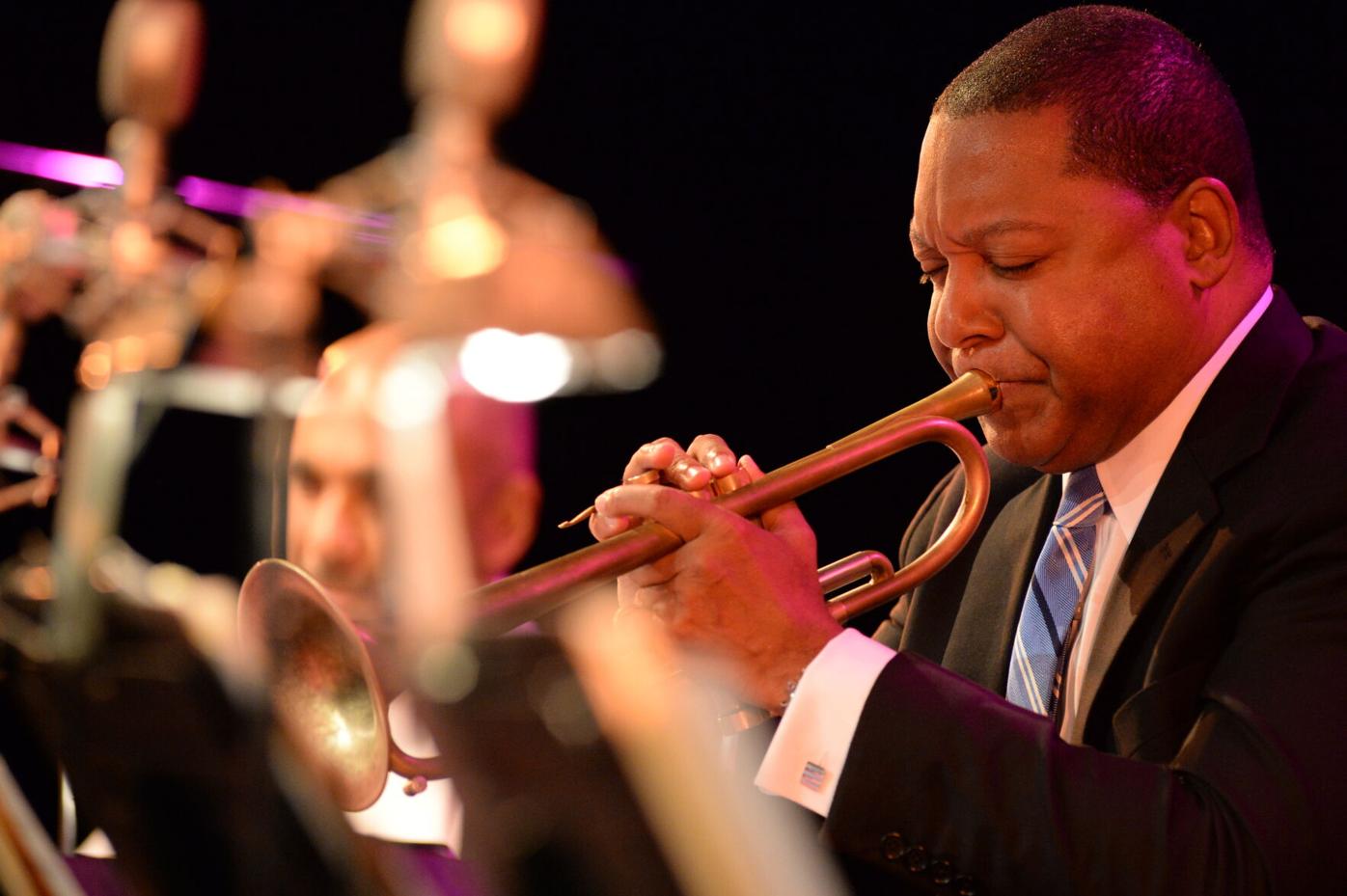 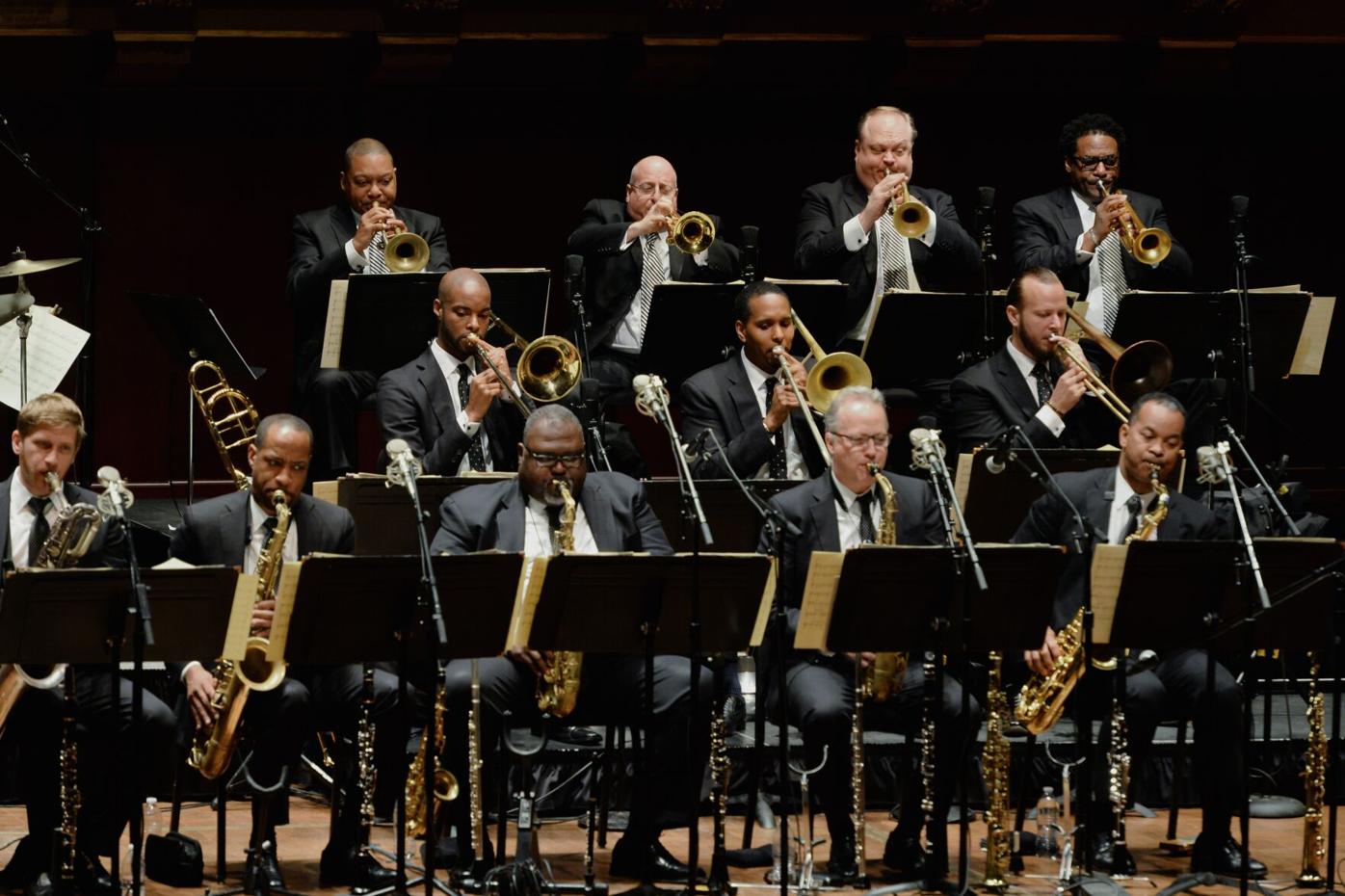 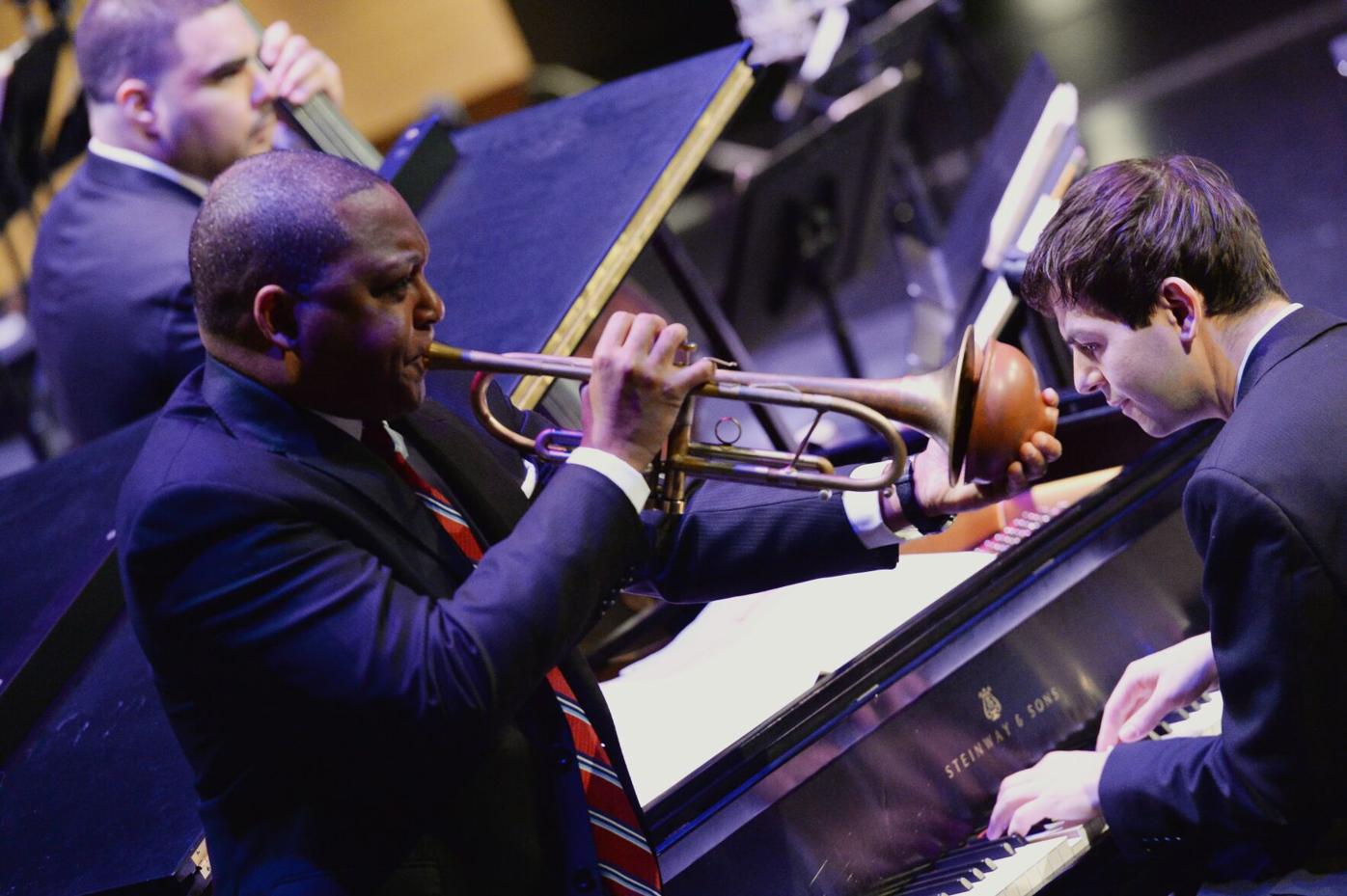 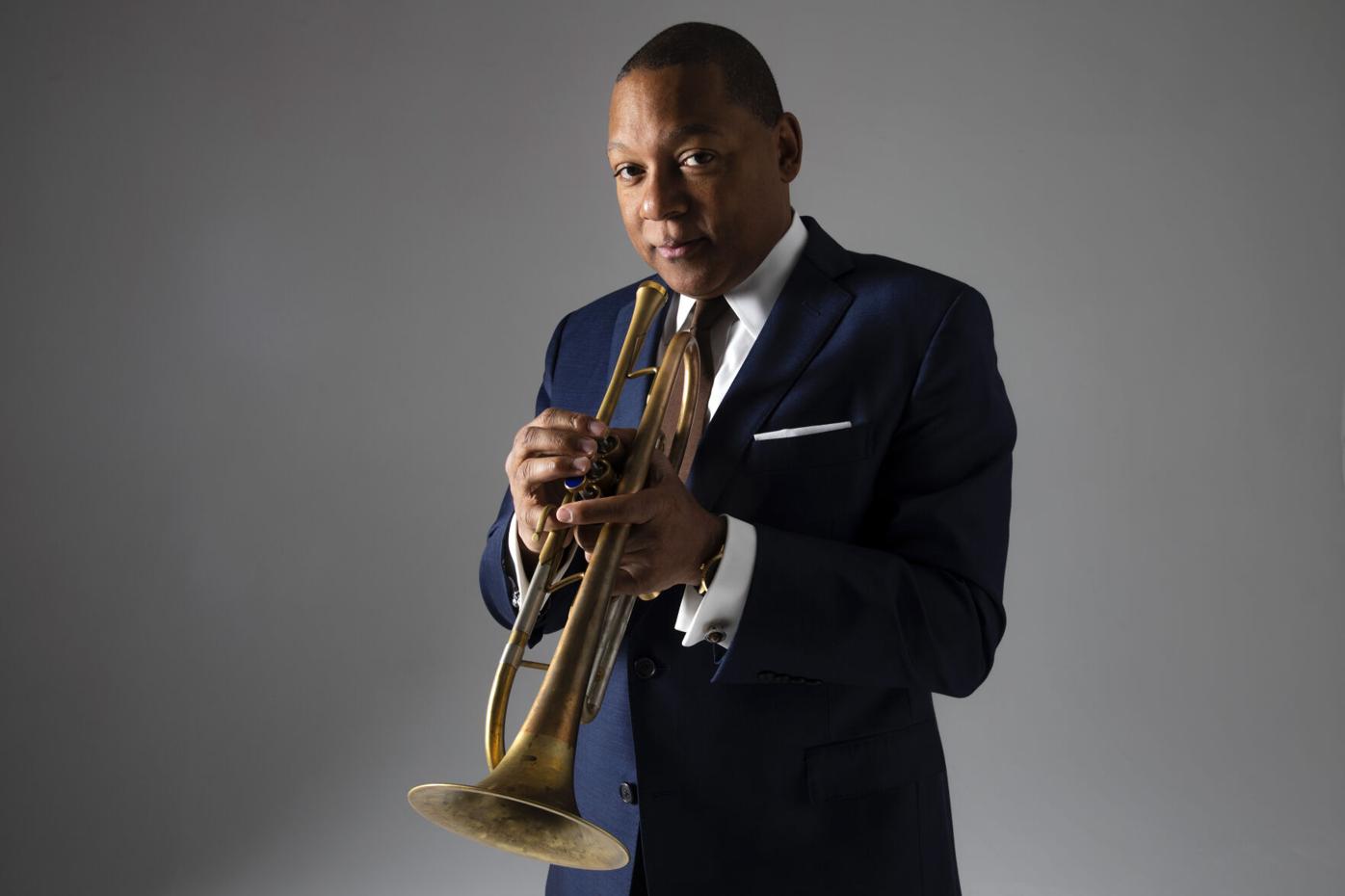 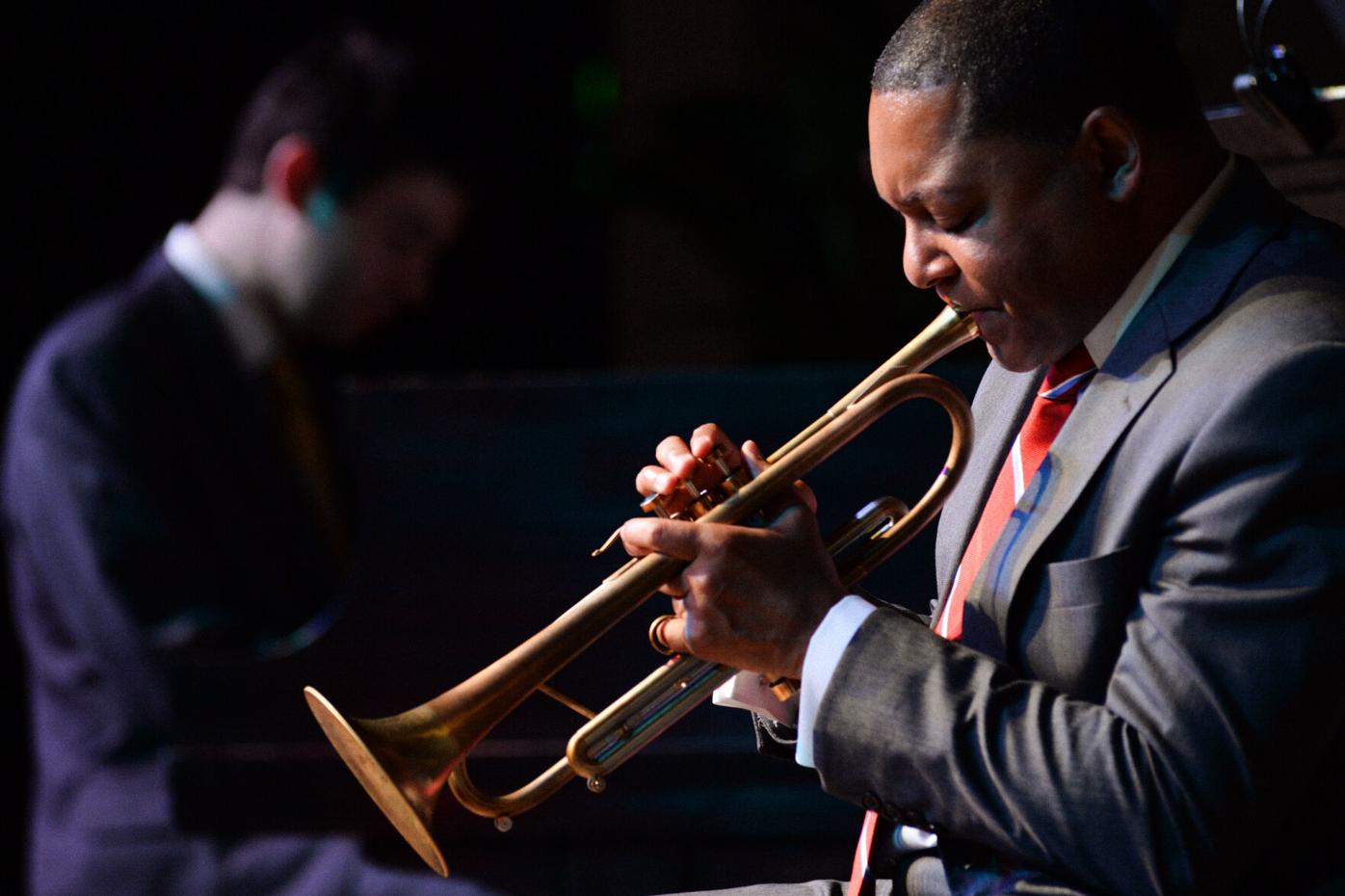 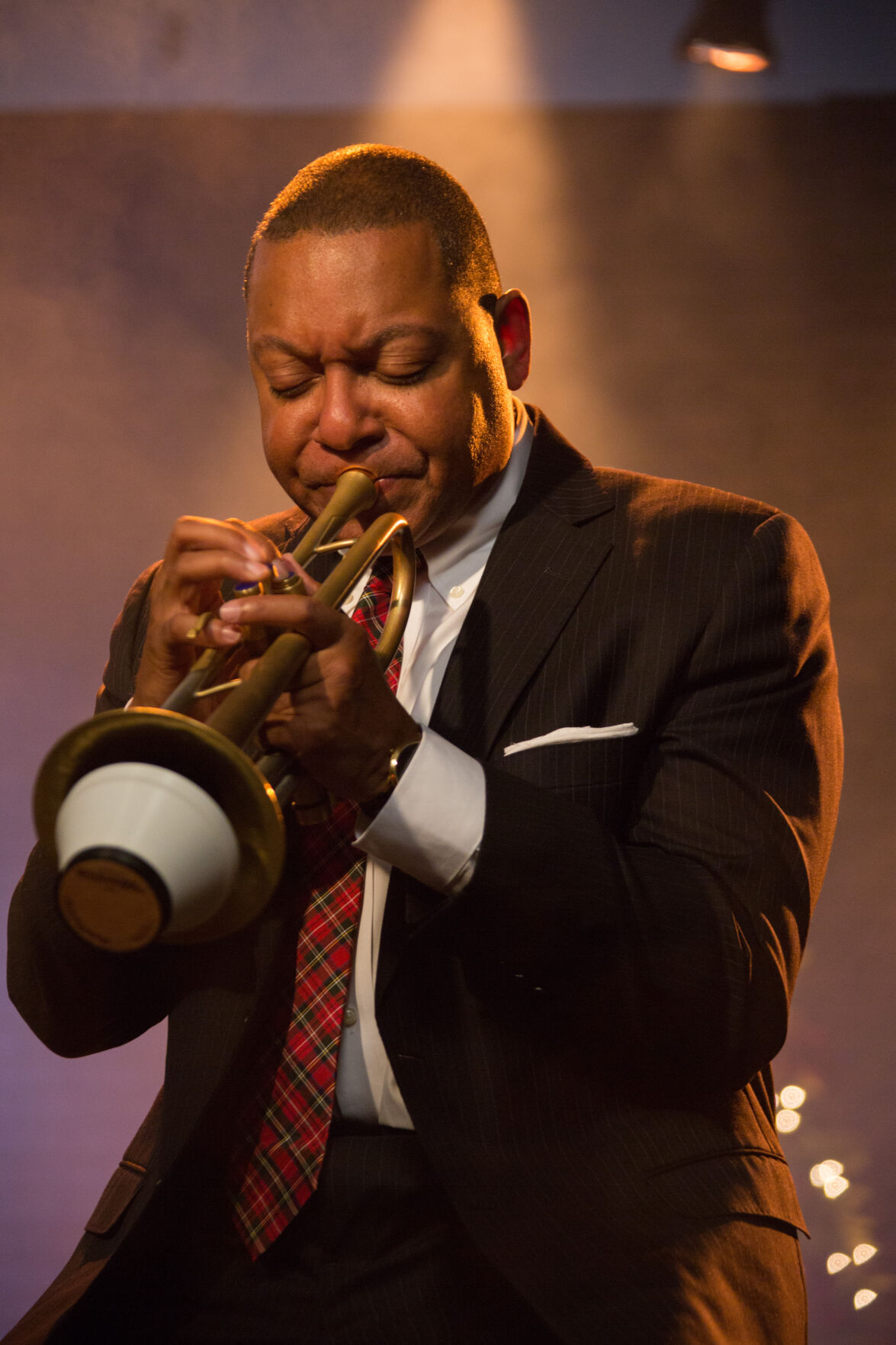 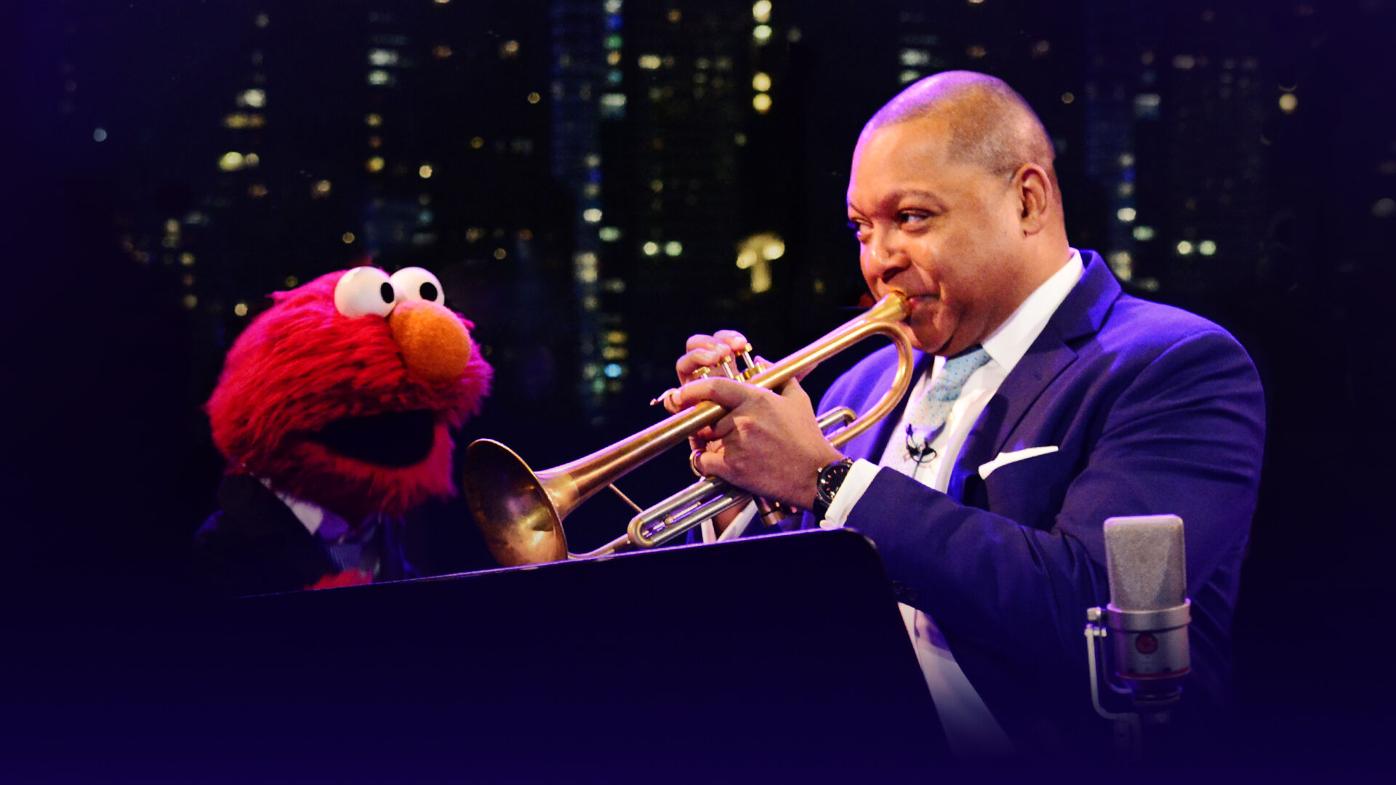 Wynton Marsalis and Elmo appear in "Jazz at Lincoln Center Presents: A Swingin' Sesame Street Celebration" that will air on PBS Friday, Oct. 30.

Despite the COVID-19 pandemic having shut down arts organizations across the country, jazz trumpeter Wynton Marsalis says he has been busier than ever these past few months.

Beyond his creativity as a performer, composer and educator, Marsalis says he also has had to be especially creative as artistic director of Jazz at Lincoln Center.

Its performance venues in New York have been closed and its live concerts and educational programs silenced.

Like so many other arts groups, Marsalis’ organization has had to pivot to online offerings of educational programs, livestreamed concerts and existing recordings.

And he has been filling his own website, wyntonmarsalis.org, with content including some of his new writings on current events, politics and culture in blog posts that include a monthly curated "top 10" lists of such things as "heroic cultural moments" and "compelling works on the subject of freedom."

It’s a new challenge for Marsalis, 58, who has been one of the most famous jazz musicians in the world for much of his 40-year performing and recording career that has included nine Grammy Awards and a Pulitzer Prize.

In a phone interview Monday, Marsalis says that, after months apart, he and the other members of the Jazz at Lincoln Center Orchestra Septet are raring to get back to touring in front of a live, if socially distanced, audience.

He and the septet will perform two sold-out concerts Saturday at Mount Gretna Playhouse, presented by Gretna Music in collaboration with Central Pennsylvania Friends of Jazz and Robin-Banks Entertainment. Only about a fifth of the seats in the open-air amphitheater could be made available to ensure proper social distancing.

This comes after the release of a concept album, both entertaining and polemical, called “The Ever Fonky Lowdown,” featuring big-band jazz, vocals and spoken word, and dealing with political malaise and cultural decay through topics from corruption to football to romance.

The group will perform a brand-new eight-piece Marsalis jazz composition called “Democracy! Suites,” which Marsalis says is inspired by the challenging times in which we find ourselves. The group just recorded the work on Sunday.

And a jazz collaboration with the Muppets, recorded last year, will air on PBS at the end of October.

This interview has been edited for length and clarity.

Tell us about the upcoming concert tour, and “Democracy! Suites.”

It’s a new suite of pieces inspired by this time. All of our music is swinging. We have a lot of good soloing. It does feature more group improvisation. This time has made us us understand the need to be more together. We’re not going to be doing much talking. We haven’t played in so long, we don’t want to talk. Let’s play.

We just recorded it (Sunday). It was quite grueling. We had to laugh, because we forgot what this was.

So we write the pieces, and then we just organize the work on when we go from grooves to swing, when we have other lines coming in, when this is going to take place. So, we know kind of what our road map is. And it gets involved.

I think it’s important for people to know that, even though we’re dealing with themes of democracy, and we’re serious about those, they’re not coming to the concert to hear a lecture or a thing about politics. We’re there to play jazz.

What’s the inspiration for the new work?

It’s about our times. But it’s not like “The Ever Fonky (Lowdown).” It’s music, so it’s not political. Our music is democratic.

One of (the pieces) is called "Out Amongst the People," and it's inspired by me seeing Jonathan Batiste playing in a crowd of people at a rally the piano and playing the melodica.

Another is called “The Dance That We Do.” And that’s about the different protests I saw in New York — the kind of music and grooves that people would be singing protest songs to. It’s always some kind of quasi-funky groove that they hear.

There’s another song, it’s called “Deeper Than Dreams.” That’s the slowest song. That’s the one the cats in the band, I think, like the most, and that one is for all of those who did lose loved ones, and it’s just there’s a loss that goes deeper than your dreams. But that it’s not necessarily a thing that’s just all negative and bad. There’s a wistfulness to it, and a bitter-sweetness to it, and it lets you value life even more.

When things are polarized, people have a tendency to feel that they have to defend their position. And that creates more polarization. So I tend to think that we are people who are reasonable. I think what we need to do is (say) I'm not going to recruit you to a position. I’m just going to say (that) whatever your position is, investigate is and get underneath it. And when you vote, and conduct your democratic business, do it with integrity — whatever side you happen to be on.

Your father died of complications of COVID-19. Were you nervous about going out on tour?

We have a lot of protocols we have to follow. We’re socially distanced on stage. If we’re all intelligent and disciplined and do what we’re supposed to do, following the rules set in place, we’ll be fine. No, I’m not afraid of it.

And I want to say that, even though my father contracted COVID, he was not afraid. He wasn’t angry. He accepted things with a great deal of grace. He did have a lot of underlying conditions. And he was also cognizant of other people’s loss. And he was very Eastern in his philosophy. So, I’m not afraid.

And also, we have to get out in space for our organization to survive. This is a very real time for all arts organizations. So we're relying on the kindness of friends and supporters, which forces us to access a humility that is important to have.

And to be honest, I embrace that. I embrace the opportunity to ask people to help us, to be in front of people, to have that type of humility. And to play. And we just have to make sure that we're intelligent and disciplined about following the rules that are set in place. And we'll be fine.

How have you been managing Jazz at Lincoln Center during the pandemic?

We’re working around the clock. We’ve put out over 500 pieces of content (online at jazzatlincolncenter.squarespace.com) since March, and we’re doing interviews, teaching, writing music, playing.

For us, just managing our organization is very creative — the changes we’ve had to make. We have expenses, we have rent. We’re trying to keep our staff largely intact and stay open, and it’s been a bear. So it's been more work than ever.

Now we’re getting ready to go out on the road and play, but we still have the business of raising money for our organization, getting things online, and thinking how we can be nimble and adjust to our circumstances and survive this time.

Tell me about the upcoming “Jazz at Lincoln Center Presents: A Swingin’ Sesame Street Celebration” (a PBS show that airs on WITF-TV at 9 p.m. Friday, Oct. 30)

I think our next recording (to be released) is going to be the “Sesame Street” show we did. We recorded it last year, in the hall (the Rose Theater at Lincoln Center).

It’s great. We’re working on the post-production on it right now. I love following something like “The Ever Fonky” with something with “Sesame Street.”

I love to have something really serious, that’s political and with social commentary, and I like to come right back with something that’s not about that at all. It’s about the kids, and it’s entertaining and fun. Because I feel like people don’t have to choose to be one way.

Will the Muppets be singing jazz?

Let me tell you this. They are unbelievable as performers. You listen to the takes of them singing. Like Elmo. The pitch and the consistency and the dedication and just the way they sing this music, it will bring tears to your eyes.

We’re doing classics like “Elmo’s Song,” and The Count comes out and he sings “The Ladybug’s Picnic,” and we’re doing “Sing a Song” and a lot of the classics on there.

As a music educator, what do you think will be the impact of the way kids are learning in this time of COVID-19?

I think kids are very flexible. I think we as adults have to remember when we were kids. And sometimes I look at kids in a war zone. And I’ll see them playing in bombed-out buildings, and what they make toys out of.

Kids are very resilient, and they roll with their circumstances. So I think there’s no way for me to know how kids would be impacted, except to say that in many instances, kids have a chance to be with their families. That’s going to be better for them from an emotional standpoint.

They will connect with their friends online, which they do anyway, much more than we do, somebody my age. And I feel that when they go back to school, and we finally get a handle on the pandemic ... kids could actually wind up being stronger.

The spoken-word parts of your new album, "The Ever Fonky Lowdown," is narration by a character called Mr. Game (the voice of actor Wendell Pierce).  Who is Mr. Game?

Mr. Game is not a political figure from today. Mr. Game is a combination of evangelical preacher who tells the congregation what they want to hear. He's a politician. He's a street hustler, a carnival barker, a con man. He's a street-corner prophet, a barbershop philosopher, but he's also a lawyer, and he spouts enticing rhetoric.

And he convinces you to sell out your integrity and to buy into a belief system that requires you to beat some group of others that Mr. Game identifies.

You recently lost a close friend in jazz critic Stanley Crouch. What can you tell me about your friendship?

Crouch was mentor before, like, a big brother. He was 15 years older than me. Everybody who knew him had a kind of back-and-forth (discussion or argument) with him, because he had that kind of personality. I literally spoke with him every day for 35 years.

When I met him I had just turned 18. We had a relationship that transitioned many times. Everything about him, how serious he was, the depth of his intellect, his level of engagement — talk about being present — that who he was. He was in your face. That was an indelible part of my life. I learned so much from him of what to do and of what not to do. As I’m sure he learned some of those things from me, too.

• For more information on Wynton Marsalis and the septet's tour, along with Marsalis' blog posts and more, visit wyntonmarsalis.org.