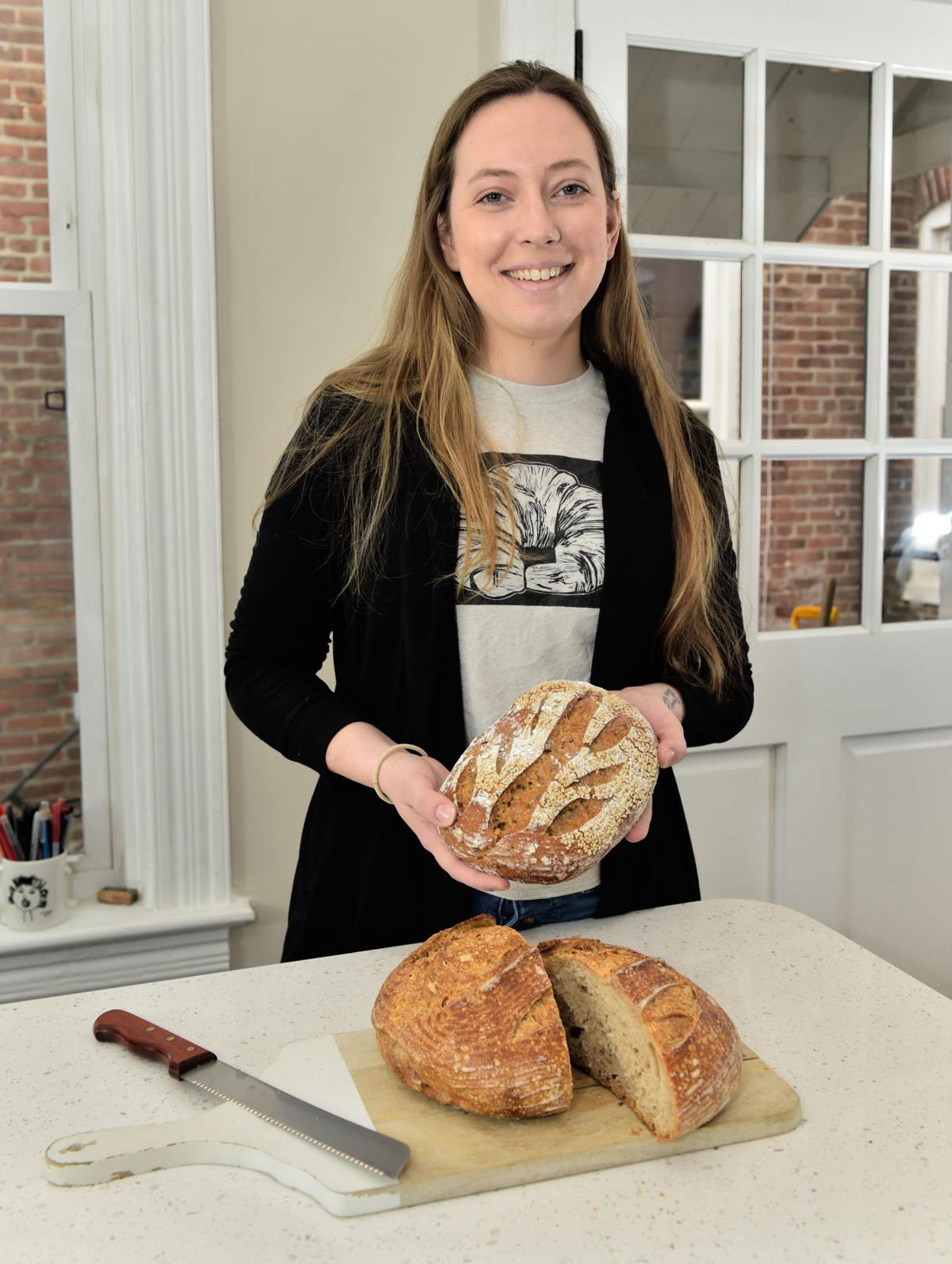 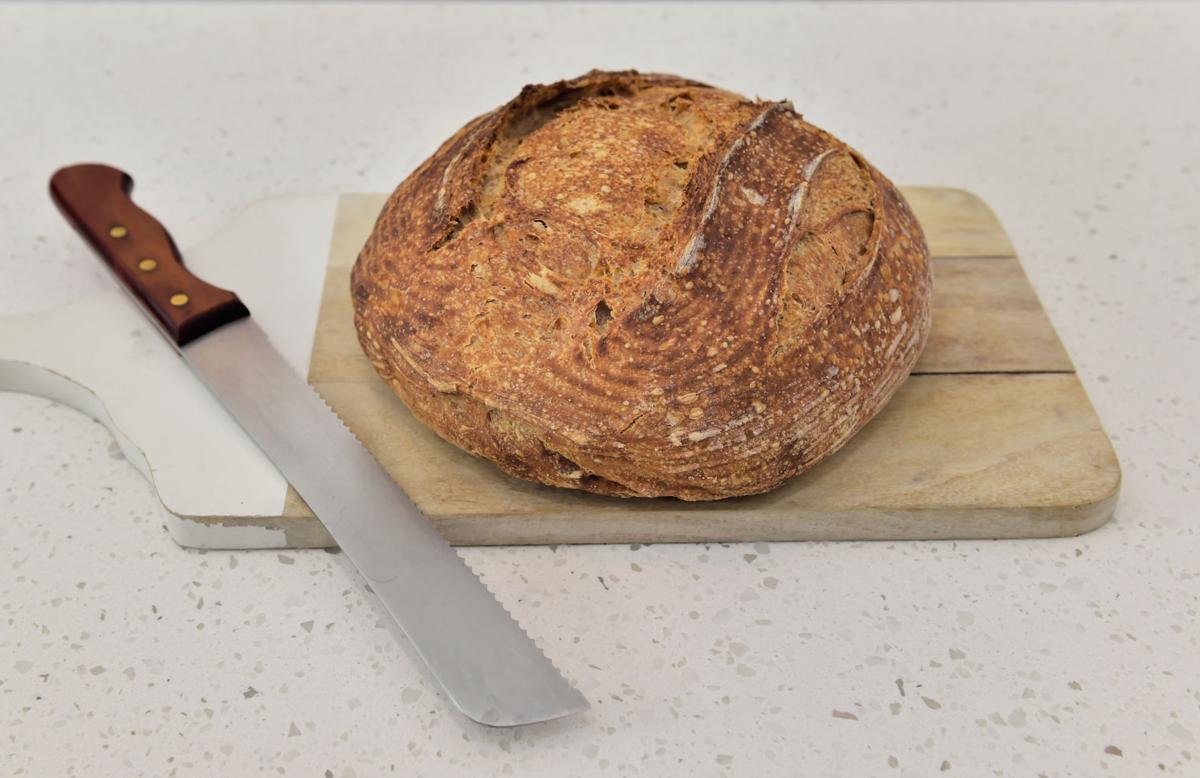 This is part of a series highlighting local women in the food industry. To read more profiles, visit LancasterOnline.com.

Kristen Richards has never really wanted to do anything else but bake. Her naturally leavened sourdough starter — a 5-year-old she calls Gertrude — is perhaps all the proof you need.

At 28, Richards is channeling her lifelong passion into a business. Her Front Porch Baking Co., which will specialize in naturally leavened breads and whole-grain pastries, is slated to open in May at Lancaster Marketplace off Fruitville Pike.

Richards, who’s lived in Lancaster since middle school, learned about feeding sourdough starters and other baking tricks from her late grandmother, who lived in Reading.

“My mom and my Nanny are from Germany,” she told me. “My Nanny baked bread almost every day — rye bread, cakes and stollen (a traditional German fruit and nut-studded cake), and she did it from memory, not from a written recipe. I was an only child, so I grew up baking with her. And I love baking because of her.”

As a high school senior, Richards was set on applying to culinary school, but her parents had other plans in mind.

“My father discouraged me at first from applying to culinary school because of the cost of tuition, and also it was different from what they wanted for me,” Richard said. “So I went to HACC for elementary education for one year, and it was not for me. I said, ‘You know what? I just want to bake.’ ”

Richards got her wish and enrolled in the one-year pastry arts program at The Pennsylvania School of Culinary Arts at YTI Career Institute, followed by a three-month internship at a woman-owned bakery in Brooklyn.

As a young baker, she hopped around restaurant kitchens, from Towson, Maryland, where she plated desserts, to Lancaster, where she landed at The Pressroom Restaurant in 2015. (The Pressroom is owned by Steinman Communications, which also owns LNP | Lancaster Online.)

At a time when the restaurant “had no bread program,” Richards started making dinner rolls and burger buns for both daily service as well as banquet events.

She describes the ramp-up to mid- to high-volume production as a “coming-of-age experience.” In December 2018, Richards helped open Bakehouse on King (also owned by Steinman Communications), taking her baking endurance to a whole new level.

“For the first three, four months, I worked from midnight to 10 or 11 a.m., Richards said. “It was exhausting to keep up with the constant pace, and I didn’t know how to handle it. The Pressroom gave me such a great platform, and I am grateful for the experience.”

But, Richards said, she knew she needed to pivot.

Last July, Richards attended the Kneading Conference, a well-known gathering of artisan bakers in Skowhegan, Maine. There, she met other female bakers, who inspired the next chapter of her career.

“I knew I wanted to do what they did, and in my community, and establish a local grain economy,” Richards said. “The conference totally changed my life.”

Richards’ newfound love for whole grains has changed the way she looks at baking.

“I’m now looking at flour as fresh produce,” she said. “Baking can be nutritional, and there is flavor in flour.”

For her new project, Richards said she is committed to sourcing her flour as locally as possible, and so far she’s found options for sustainably grown wheat, spelt and rye from Castle Valley Mill in Doylestown and Small Valley Milling in Halifax.

But she’s discovered that these mills, in an agricultural-rich state, are few and far between.

“(Pennsylvania) is known for farming, but how much is going toward human consumption? Not very much,” Richards said. “It really opened my eyes. Why can’t I have grain in my bread that’s grown in my state?”

While she builds a kitchen at Lancaster Marketplace, Richards said she is testing her recipes on friends and family with the hope of adding a subscription bread service once she’s open for business.

Her ovens will have the capacity to bake 12 loaves at a time — “48 loaves in four hours” — a small-scale operation that lets her educate the public on the benefits of whole grain, naturally leavened bread.

“I’m really excited,” Richards said of the new venture. “It feels good to realize what I want to do and go for it and build the life I’ve wanted. I love Lancaster so much now. I own my own home; it’s where I want to be, and I’m committed to inserting myself in the community and that’s through baking.”

You can follow the progress of Front Porch Baking Co. on Instagram. Earlier this week, Richards began offering how-to instructions on making your own sourdough starter. Email her at hello@frontporchbakingco.com.

“The thing I love most about granola is the way it can be customized to your liking,” Kristen Richards said. “Simply swap out the nuts/seeds you prefer. It’s a perfectly humble breakfast food or snack with a great shelf life that I eat almost every day.” Kristen likes the natural rolled oats from Small Valley Milling in Halifax, which are available for purchase at Lemon Street Market in Lancaster.

1/2 vanilla bean, split in half lengthwise

With a paring knife, scrape the seed paste from the inside of the vanilla pod and transfer to a saucepan. Add the brown sugar, honey and coconut oil and heat over low heat, stirring until completely melted.

Pour the liquid mixture over the dry, stirring until completely coated. Divide the granola onto prepared pans and place in the oven.

Bake until golden brown, 20 to 25 minutes, stirring every 5 to 7 minutes for even browning and to prevent clumping.

Let cool completely before storing. If granola is sticky when cool, return to the oven and bake for 5 additional minutes.

Enjoy with local plain yogurt and an extra drizzle of honey on top.

How to caramelize onions & other cooking tricks [Stay-Put Cooking]

Mayor: Officer who put knee on man's neck should be charged

'Bummed out': SpaceX launch scrubbed because of bad weather

Pa. House Democrats say they were in the dark for a week about Republican’s positive coronavirus test

How to spatchcock and roast a chicken [Stay-Put Cooking]

Stay-Put Cooking is a daily kitchen dispatch while you're stuck at home social distancing. Check out the archive for more tips and tricks.

The Pennsylvania Department of Agriculture, (866)-366-3723, uses a risk-based inspection reporting process for restaurants and, other food handlers.

From the spring 2020 edition of Balance magazine

Stay-Put Cooking is a daily kitchen dispatch while you're stuck at home social distancing. Check out the archive for more tips and tricks.

Women in Food: Michelle DeChesser shares her passion for pasta, cooking seasonally and a recipe for Italian cookies

In 2017, longtime restaurant chef Michelle DeChesser packed up her life in Portland, Oregon, landing in Lancaster with the hopes of starting o…

It's National Spinach Day: Here are recipes to help you celebrate [collection]

Today is National Spinach Day. We gathered a collection of recipes that celebrate spinach and its many tasty uses. Let us know your favorite w…