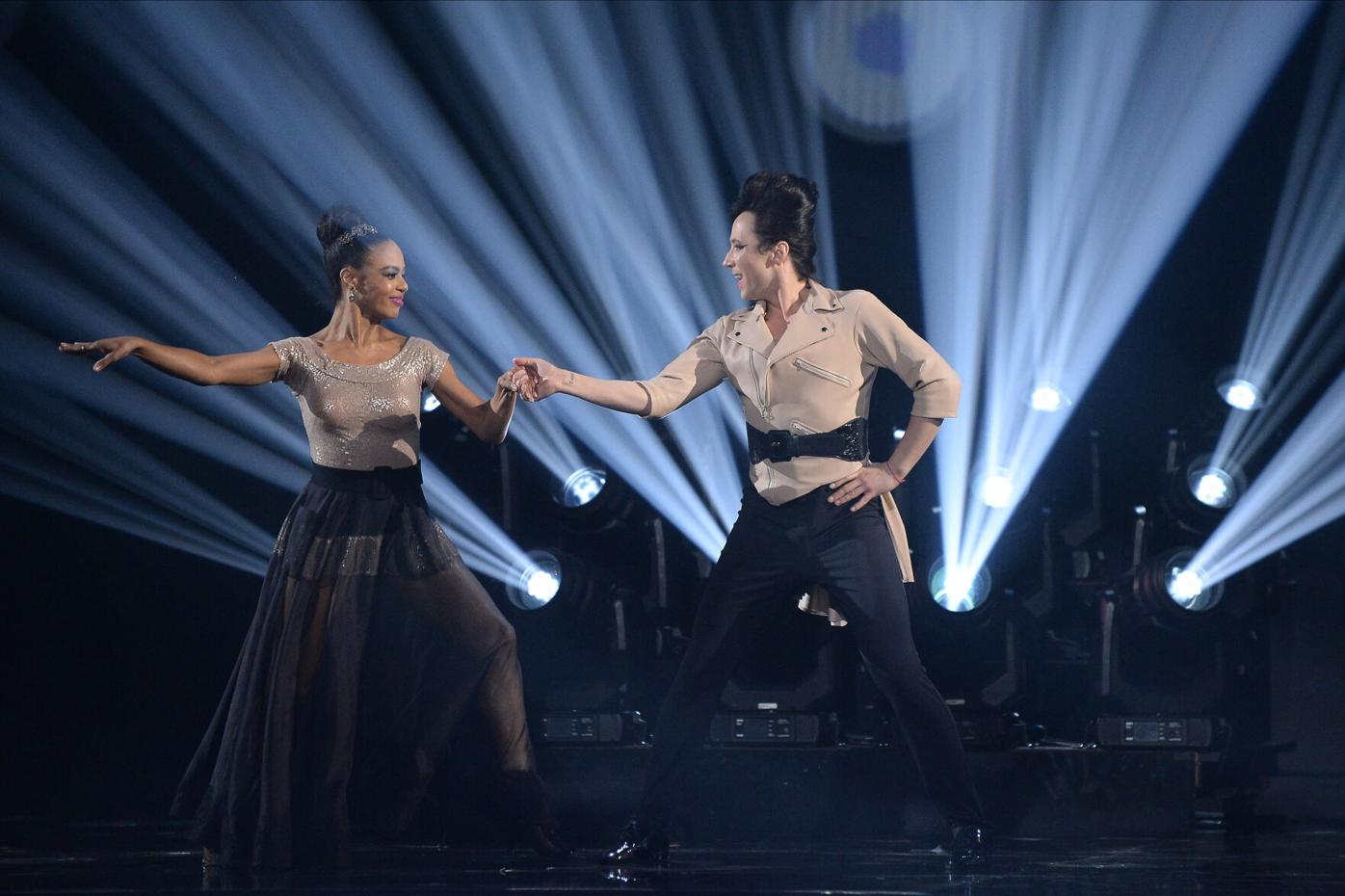 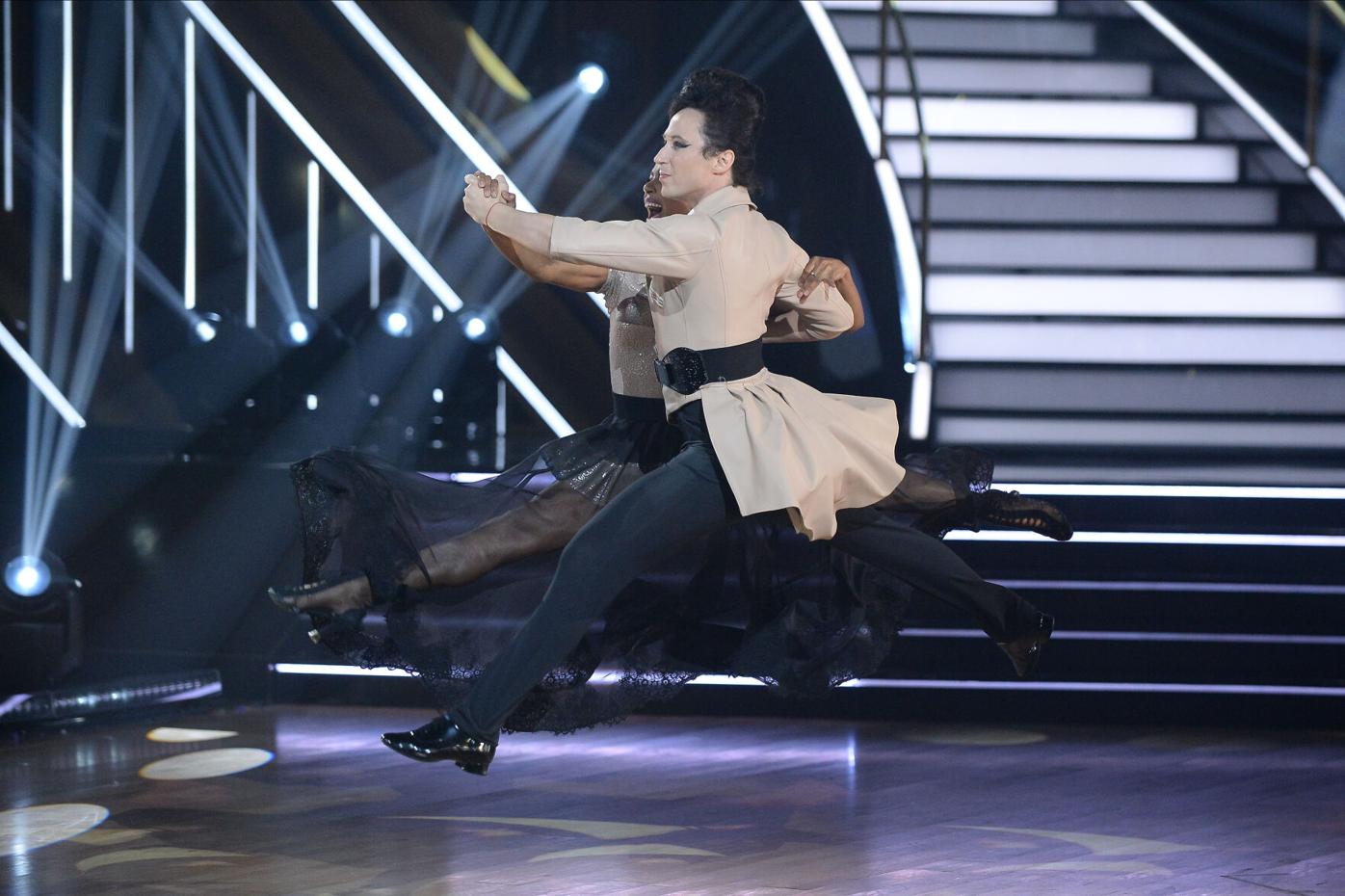 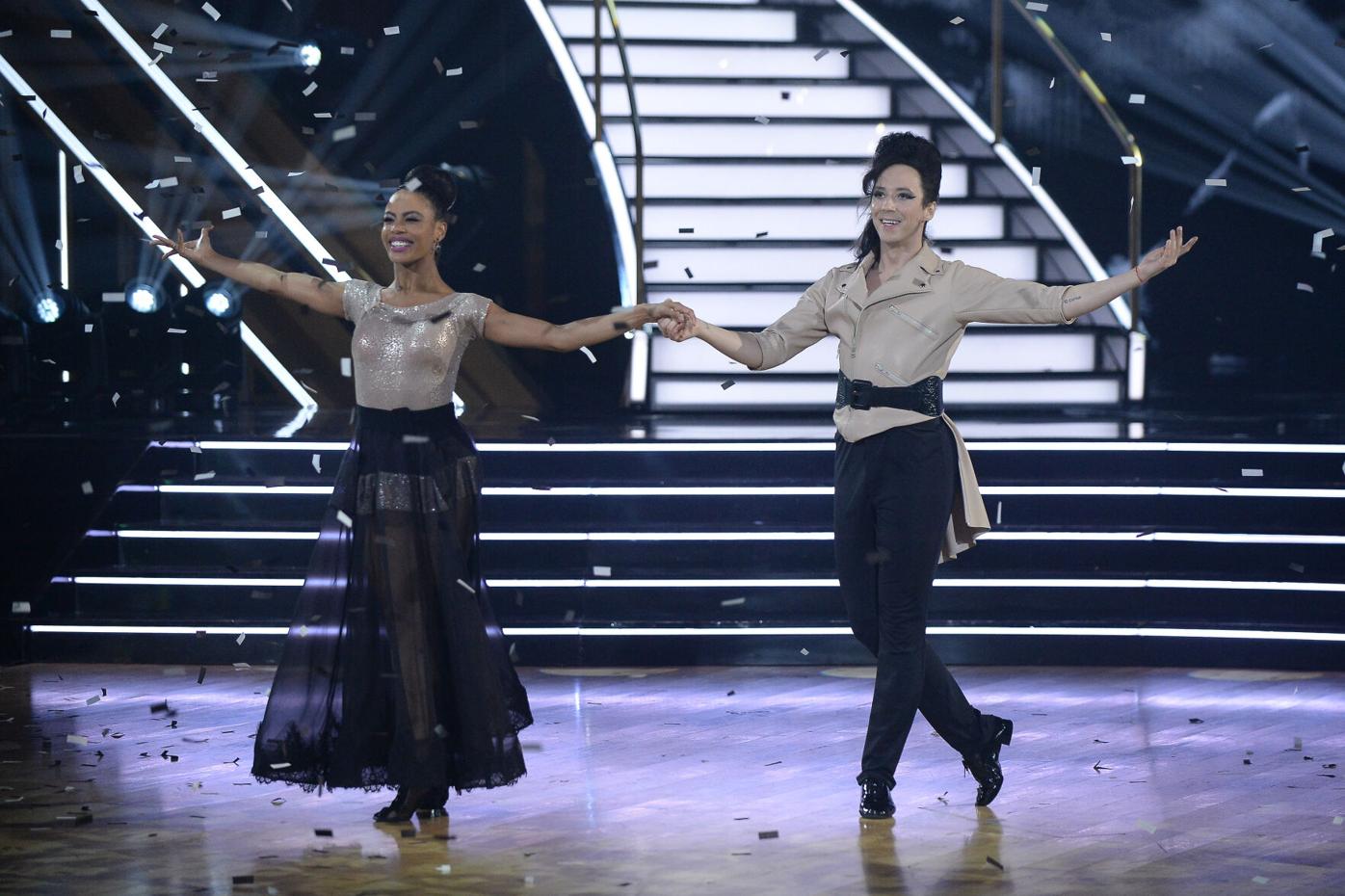 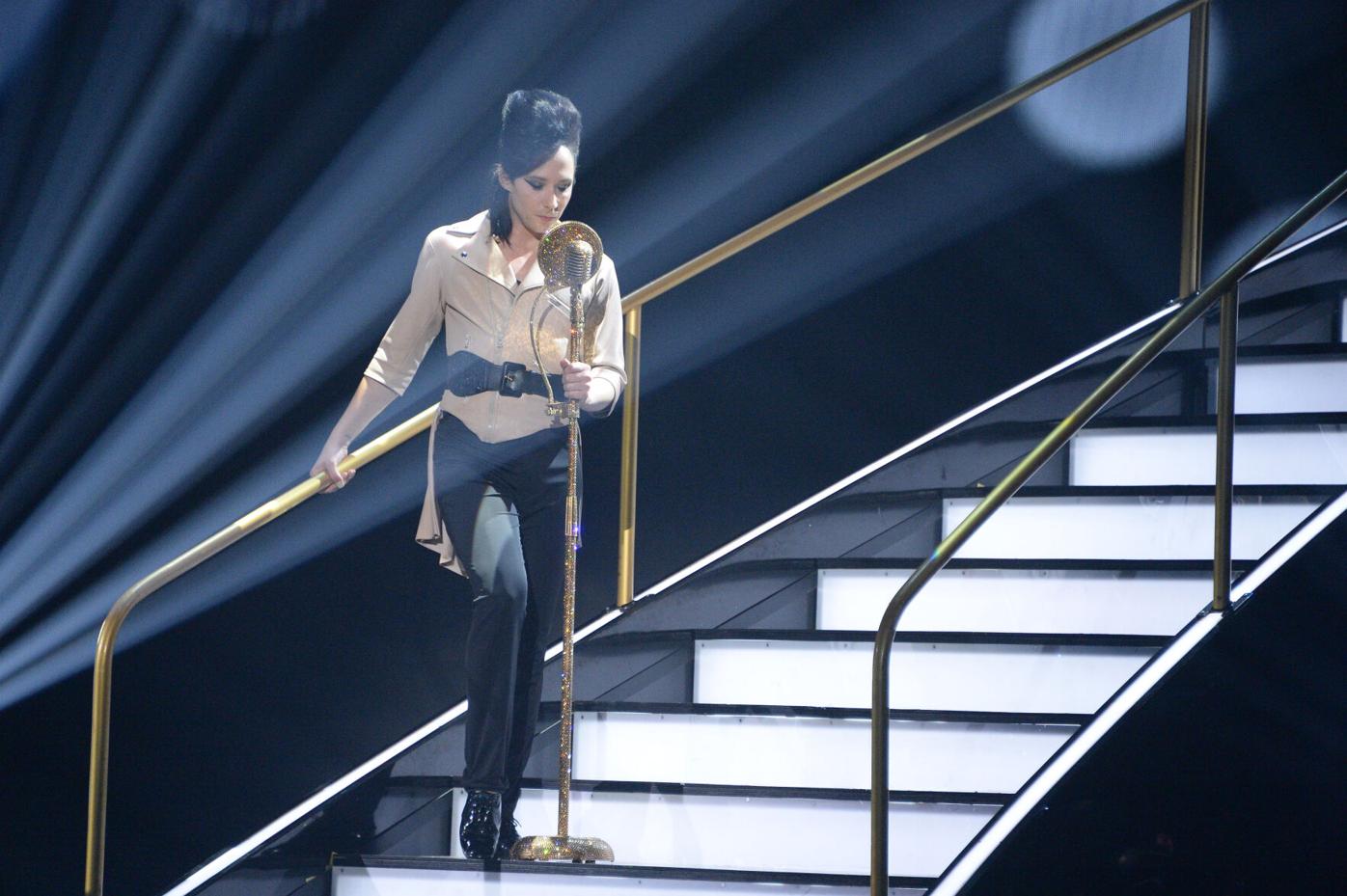 Johnny Weir channels singer Amy Winehouse, lip synching at the beginning of  his quickstep on "Dancing With the Stars" Monday night on ABC. 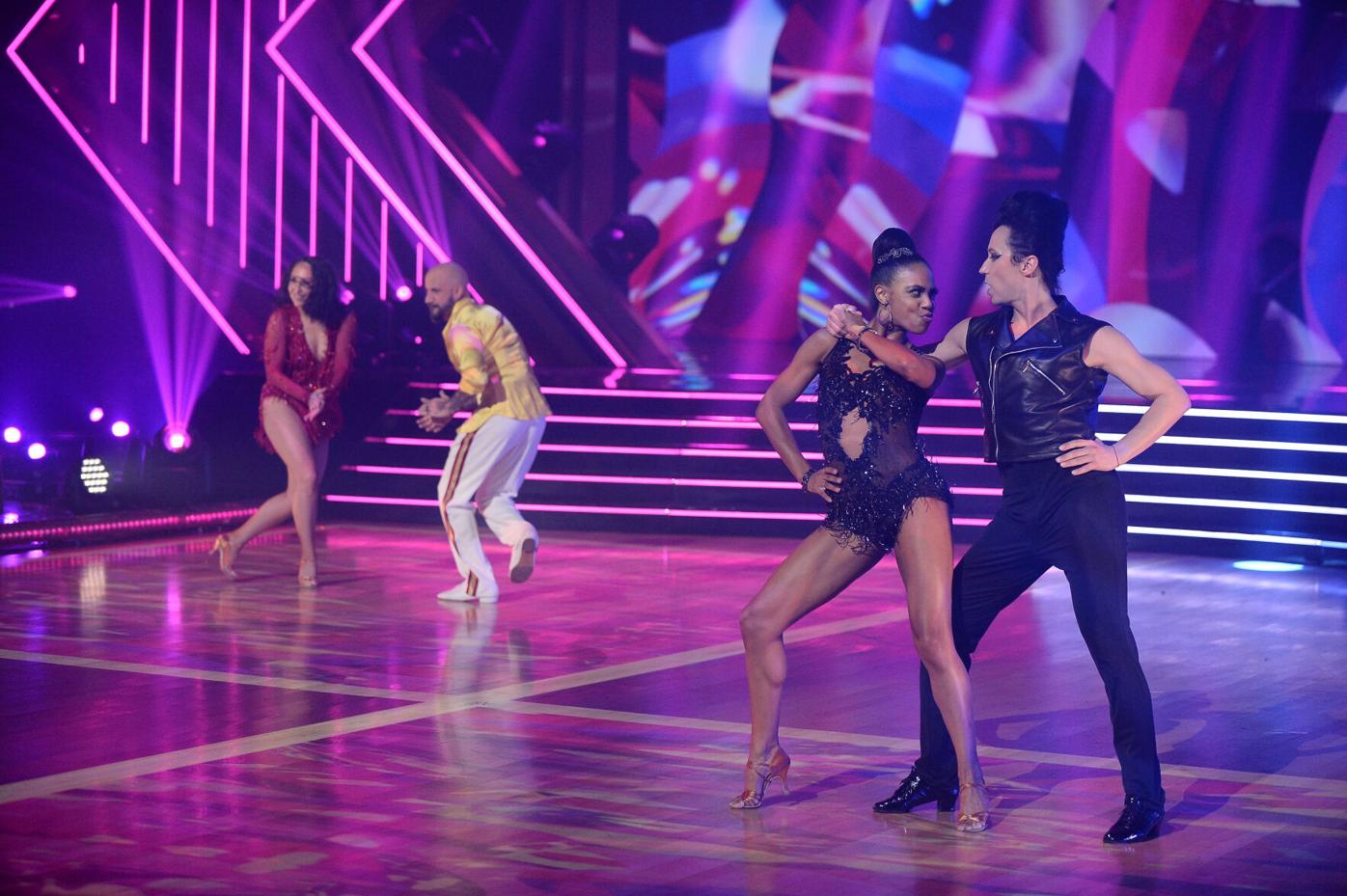 Johnny Weir, right, and his partner, Britt Stewart, perform in a jive dance-off Monday night, on ABC's "Dancing With the Stars," against Backstreet Boy member AJ McLean and his partner, Cheryl Burke, left. McLean and Burke were eliminated from competition. 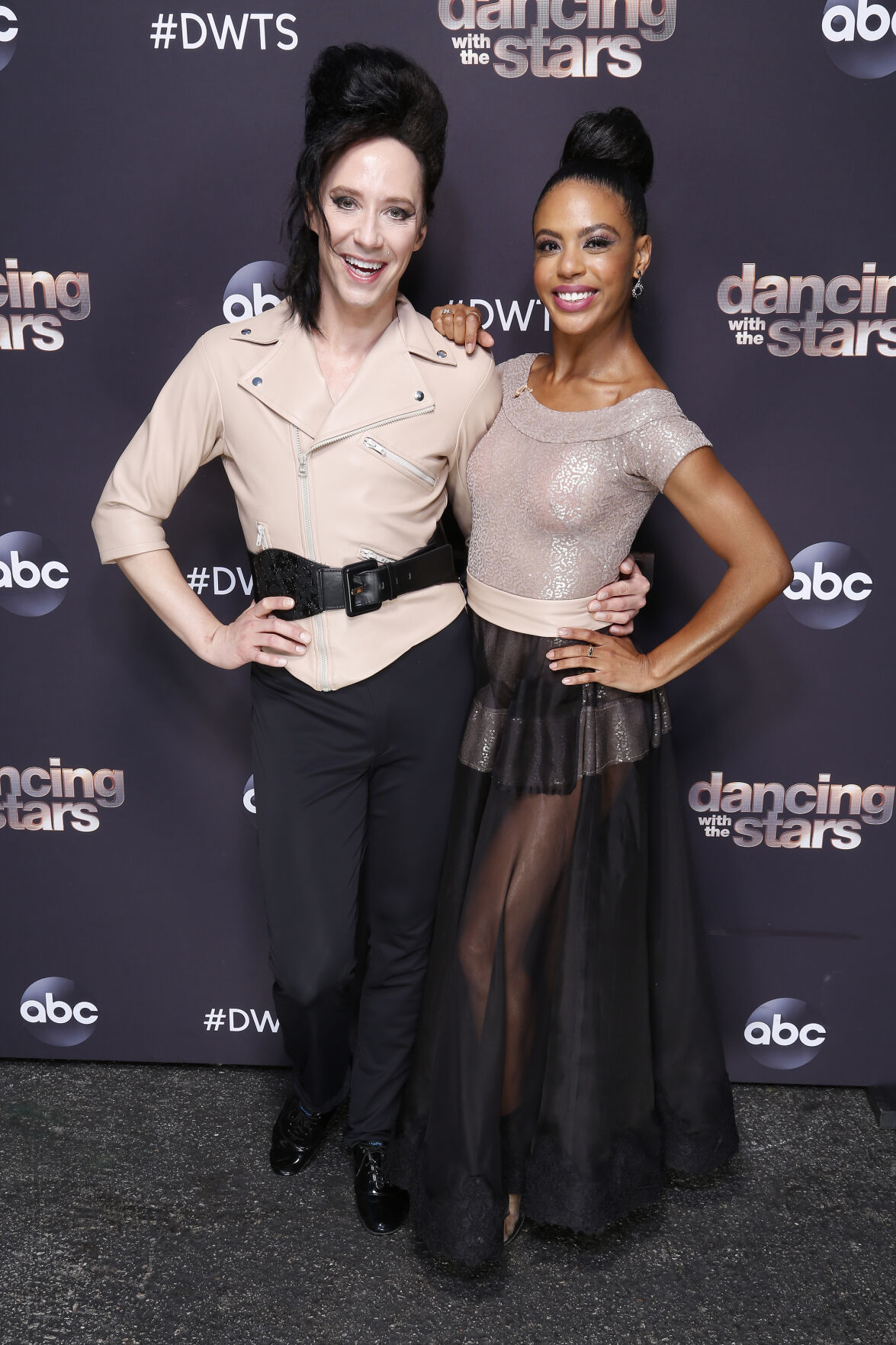 Johnny Weir hit both highs and the lows Monday night in the wake of his highly praised quickstep routine on ABC's "Dancing With the Stars" — from a perfect score to near-elimination and an emotional story of triumph from his Olympics experience.

Although the judges were effusive in their praise, and awarded the Olympic figure skater and his professional dance partner, Britt Stewart, a perfect score of 30/30, the pair was in danger of being sent home from the show by the end of the evening.

(Couples' scores on the show are a combination of the judges' marks and votes from the viewing audience; throughout the 29 seasons of the show, successful dances have been met with elimination because of a lack of sufficient audience votes.)

Another high for the evening was Weir's hair, a black architectural beehive reminiscent of that of the late Amy Winehouse, to which the Quarryville native's dance was a tribute.

Monday night on the ballroom dance competition was "Icons Night," on which the celebrity dancers were to pay tribute to an icon meaningful to them. Weir and Stewart danced to a cover version of the Winehouse hit, "Valerie."

Speaking in a video during rehearsal, Weir said he chose the late British singer, who died young in 2011 of an alcohol overdose, because of the way she stayed true to her unique self in the face of the pressures of fame.

Wearing a belted beige jacket over black pants, and sporting heavy Winehouse-inspired winged eyeliner, Weir led his partner around the floor confidently, with high kicks. leaps and spins. Weir's hair was only slightly higher than the pompadour the 36-year-old, known for his flamboyant sense of fashion, sometimes wears in his "day job" as a sports broadcaster for NBC.

The judges called their quickstep "amazing," "groundbreaking" and "unique" before awarding them three perfect 10s — tying them for top score with former "The Bachelorette" star Kaitlyn Bristowe and her partner Artem Chigvintsev.

"We've never seen a quickstep like that," judge Carrie Ann Inaba said. It was Inaba's tie-breaking vote at the end of the evening that saved Weir and Stewart to dance another week, and eliminated Backstreet Boy singer AJ McLean and partner Cheryl Burke.

Those two couples also performed jive routines against each other, in a "dance-off" for extra points.

Weir got emotional in his rehearsal video on the show, talking about his experiences at a competitor in men's figure skating at the 2006 and 2010 Olympic games.

"When you’re in the public eye, there is a lot of pressure that comes with that. You no longer can be just a normal person, and Amy Winehouse, I think, dealt that with the pressure in the best way she could," Weir said. "In that way I can certainly relate.

"When you’re in a sport that gives you six minutes to succeed, and you’ve dedicated every single waking minute of your life to those six minutes, the pressure is outrageous," Weir said.

"In 2006, my first Olympic Games, I was supposed to be an American men’s Olympic medalist. And I could not handle the pressure, and I blew it. I couldn’t even feel my legs. I had one of the first worst performances of my life in front of the world," he said.

"I failed myself, I failed my country. I was a laughing stock and it’s just because I had a rough night," Weir recalled.

"And, in four year's time, I went back to another Olympics and I felt like I needed to redeem myself," he said. "And ... despite all pressure and all the hate and all the people who didn’t want me to succeed ... I was able to give one of the best performances of my life," though he didn't win a medal.

After the show, Weir told Entertainment Tonight he's "proud of representing little kids that grew up in little towns just like me, that want to see themselves on TV in some way. It's a huge honor to be able to do that in so many households in America."

Weir lived in Quarryville until middle school, when his family moved to Delaware so he could train in Wilmington.

Weir spent part of last week dancing and the wee hours of the morning doing remote skating analysis for NBC for a skating competition in China.

Weir is also a three-time U.S. national champion in figure skating, and was featured in a Netflix drama, "Spinning Out," earlier this year. He has appeared on a variety of game shows and reality competitions such as "The Masked Singer."

"I've never felt more alive on the dance floor," Weir said in a Twitter video at the end of Monday night. "I'm grateful for the experience tonight. It was not nice being in the bottom two. It's a great way to find my fighting spirit."

Weir and Stewart will dance in the semifinals of "DWTS" next Monday, Nov. 16, starting at 8 p.m. on ABC. Weir revealed on Twitter Tuesday they'll be doing a jazz dance to the One Republic hit "I Lived."

Lancaster County is a perfect fall getaway, even in a pandemic, says National Geographic; here's why

It sounds like Christmas as stations switch to holiday music; when do you start listening?

The bidding will start Friday, Nov. 13, for children’s artwork being sold for the third annual Peace Kids to the Rescue Art Show and Silent Au…

On Veterans Day, armed forces to be honored with ceremonies, free meals, services

Note: This story will be updated as announcements of meals, services and ceremonies come in.