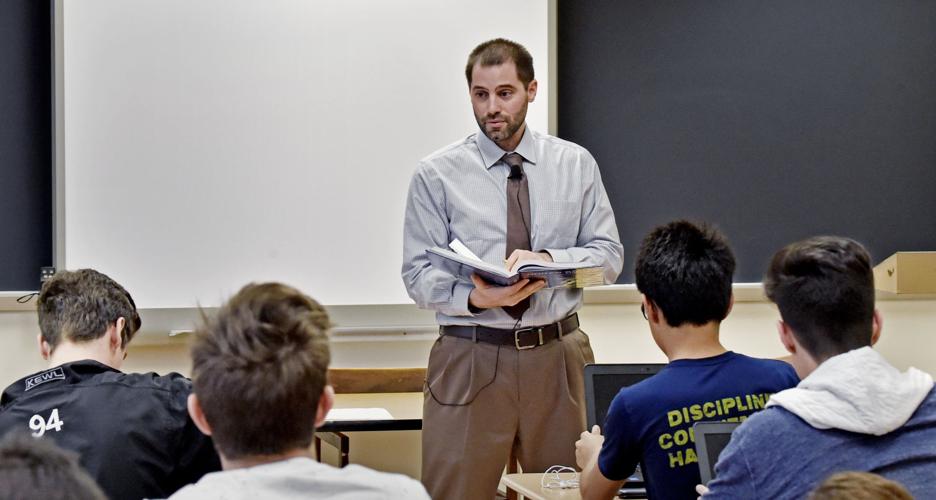 Todd Mealy talks to the students in his U.S. History class at Penn Manor High School on March 23, 2018. 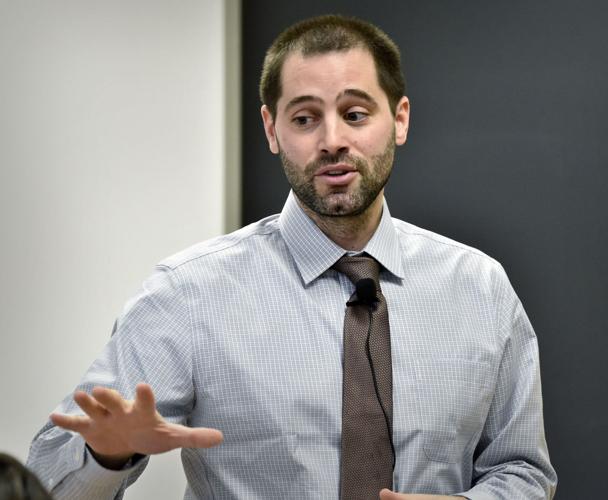 Todd Mealy talks to the students in his class at Penn Manor High School march 23, 2018.

Editor's note: This article was originally published in 2018.

When Van Gosse’s daughter was in elementary school, she came home with a coloring book that included images of the Rev. Martin Luther King Jr. and Malcolm X. It made his jaw drop.

“I can’t believe Malcolm X is in a coloring book for a 7-year-old,” Gosse remembers thinking to himself. “There’s part of me that’s glad he’s in there, that’s glad he’s on a postage stamp. But that boggles the mind.

“All of these people were seen as dangerous radicals.”

Gosse, department chair and associate professor of history at Franklin & Marshall College, works in his courses to counteract what he describes as a sanitized portrayal of King. Other local educators at the high school and college levels share his mission.

This is the first of an occasional series that will explore some of the events that marked 1968 as one of the most tumultuous years in U.S. history. Read more about the series, here.

Academics and activists alike have criticized the way King’s life and death is discussed in American classrooms. In January 2015, Black Lives Matter participants started the #ReclaimMLK social media campaign to shed light on King’s accomplishments and activism beyond the “I Have a Dream” speech.

Critics say King’s legacy is whitewashed by only focusing on his nonviolent practices and ignoring his anti-capitalist and other radical views.

“He was not such a safe, nice man that white conservatives would enjoy quoting,” Gosse says. “He was a very radical figure. He was a socialist … I want them to remember that Dr. King called out the triple evils of racism, materialism and militarism. What I want them to remember is what a radical critic he was … I find them very open to that message.”

Mealy talks about King with freshman in a Modern U.S. History Class, and with upperclassmen in a seminar on race, ethnicity and gender.

“Teaching King’s legacy can become cliched,” Penn Manor High School social studies teacher Todd Mealy says. “The teacher can’t get into the complexities of race in contemporary America if all they do is tell a few stories about King.”

Mealy has also written several books, including “This is the Rat Speaking,” which details the 1969 black student uprising at Franklin & Marshall College.

“Teaching King’s legacy can become cliched,” Mealy says. “The teacher can’t get into the complexities of race in contemporary America if all they do is tell a few stories about King.”

Mealy emphasizes lesser-known parts of King’s life that provide important context. For example, he says, King’s approval rating was abysmal shortly before his death. A 1966 Gallup poll showed that nearly two-thirds of Americans had an unfavorable opinion of him.

In teaching about King’s assassination, Mealy wants to convey four messages to students: King’s gravitation toward the more militant black power ideology, the details of the murder itself, the aftermath of King’s death, and the contemporary significance we can glean from it.

Also in this series marking the influence and assassination

of Dr. Martin Luther King are these articles:

The people | The media| The Lorraine Motel

The possibilities | The church

“Lancaster faced unrest for four or five days afterward in the city’s seventh ward,” Mealy says. “The governor actually called in a National Guard unit to monitor the situation.”

John McLarnon, department chair and associate professor of history at Millersville University, created a class titled “The Nightmare Years” to focus on the turbulent era that began with the Brown v. the Board of Education decision in 1964 and ended with President Richard M. Nixon’s resignation in 1974.

King’s involvement in the civil rights movement is part of the discussion.

McLarnon discusses reasons why King was successful, from his public speaking skills to his decision to use nonviolent civil disobedience. He also wants students to know how timing played a role in propelling King onto the national political stage.

John McLarnon, department chair and associate professor of history at Millersville University wants students to know how timing played a role in propelling King onto the national political stage.

For example, television was becoming a bigger part of American culture, allowing Americans in the North to see the injustices happening in the South. Also, the world wasn’t far removed from Hitler’s reign, McLarnon says, allowing people to draw parallels between Hitler’s idea of white superiority and the southern notion of white superiority. That helped King’s message resonate.

He says a handful of students react negatively to any suggestion that outside forces influenced King’s legacy, partially due to the canonized version of King they’re taught in early education.

“He’s reached a status in almost American mythology at this point … it’s difficult,” McLarnon says. “Unless you have a really objective group, you have to tread very carefully, because you may be saying things that are going to insult people.”

To make his students empathize, he holds a classroom debate, but assigns sides. Several students are asked to decide, if approached by the NAACP, if they would send their hypothetical 17-year-old black female daughter to be one of the first students to integrate a southern high school.

“It’s interesting, the number of students who say — this is across races, black, white — who will say, ‘No. I know that they were doing good work and it had to be done and they changed the country, but I wouldn’t put my kid in that kind of jeopardy,’ ” McLarnon says.

“I don’t think that the Pennsylvania public school system gets a high score with its civil rights education,” Mealy says.

“There’s a challenge of how to get classes of mostly white, suburban, middle-class teens to relate to the concepts of alienation that Martin Luther King was trying to drive home,” Todd Mealy says. “The goal is to have frank discussions about race, about white privilege, about this notion of racial innocence that some students don’t want to hear.”

“I don’t think it’s enough, and I think it’s negligent to the most consequential topic to American history in American culture.”

Mealy says teachers must be courageous when tackling these difficult and complex topics.

“There’s a challenge of how to get classes of mostly white, suburban, middle-class teens to relate to the concepts of alienation that Martin Luther King was trying to drive home,” Mealy says. “The goal is to have frank discussions about race, about white privilege, about this notion of racial innocence that some students don’t want to hear.”

One way to begin, Mealy says, is to dispel myths and misconceptions about who King was.

“I think the goal is, you use a story like King’s life and death to make students restart their own education on race … they’re challenged to question everything that they’ve previously learned and to begin again,” Mealy says.

In Bishop Dwayne Royster’s mind, the old America has fallen. He said he watched it happen earlier this month when a crowd of mostly white peop…

A looming taxi strike, a 1920s car show, and ski slope fashion circa 1971 [Lancaster That Was]