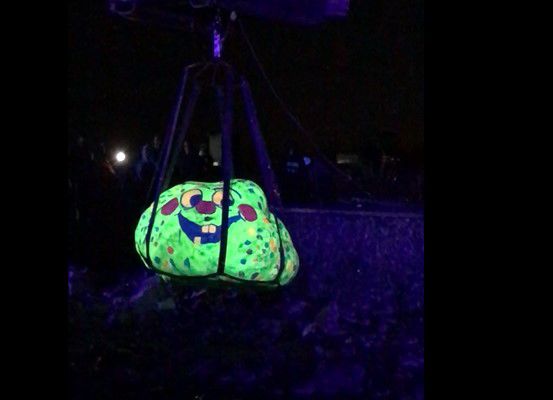 A very large splat that glowed.

Cherry Crest Adventure Farm in Ronks dropped a 1,300-pound pumpkin on Saturday. The giant pumpkin fell at night, but was still visible because it was painted with glow-in-the-dark paint and filled with glowing liquid. The same day, at the Country Barn, visitors shot pumpkins from a cannon and smashed pumpkins in the field.

Next was the “ultimate car wrecker,” a 965-pound pumpkin and a 600-pound pumpkin dropped onto a 2001 Honda Civic, says Cathy Kornfield, who handles public relations for the farm.

And the finale was a 1,300-pound glow-in-the dark pumpkin. The pumpkin was grown by Jim Pantano of Allentown.

(If that sounds large, the Guinness World Record for heaviest pumpkin is held by Mathias Willemijns from Belgium and his 2,624.6-pound pumpkin.)

Fireworks at the end of the night closed the season for Cherry Crest. Some of the giant pumpkin pieces are fed to cows on the farm and some are composted.

Next year’s corn maze will be the 25th, making it the longest-running corn maze in the country.

Visitors could shoot pumpkins out of a cannon and aim to hit a vehicle, says director of fun Katie Laughlin.

“We spend most of the season trying to get people not to smash the pumpkins,” Laughlin says.

The smashed pumpkins will be fed to the animals on the farm: a donkey, a pony, sheep and beef cattle. Other pumpkins will be left on the fields to provide nutrients for the soil, Laughlin says.

And next year will bring at least two corn mazes to the site.

Hoya kerrii are shaped like hearts and easy to grow; Here's where to find them in Lancaster County

The heart-shaped hoya kerrii is having a moment.