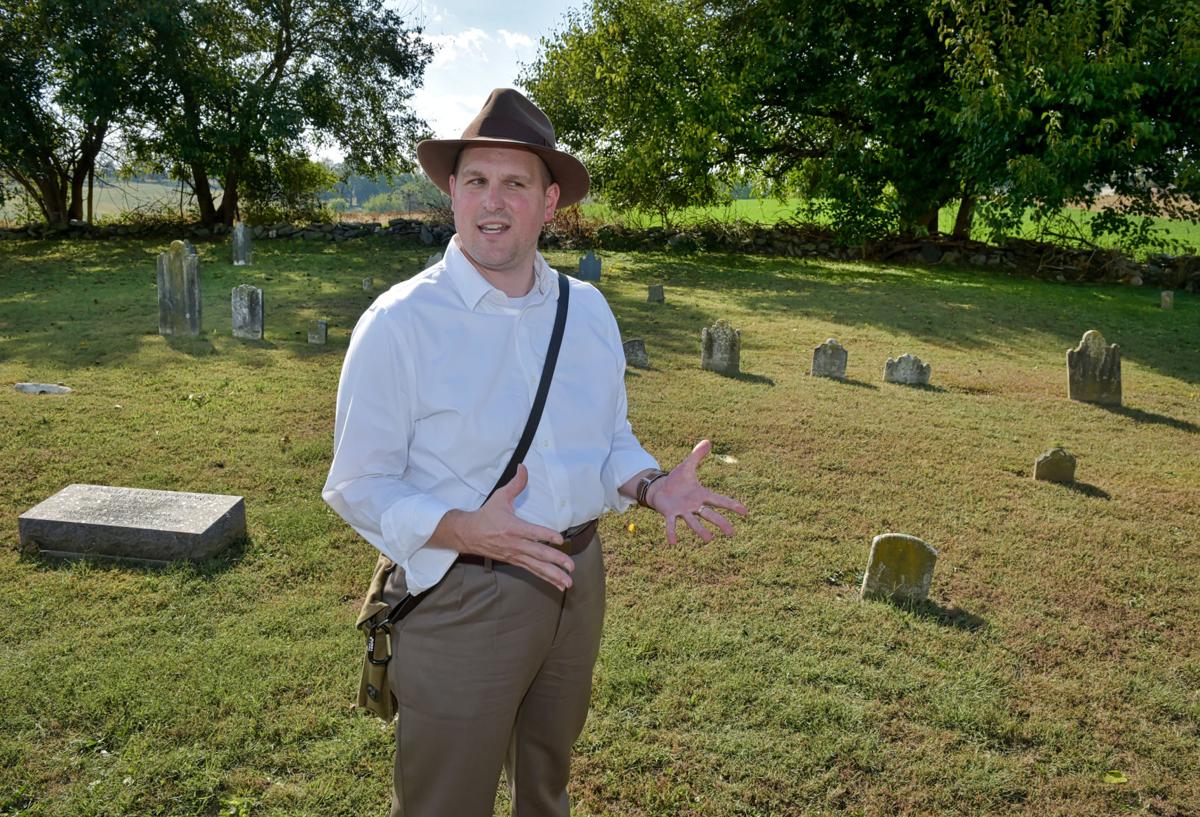 Adam Zurn, the creator of Uncharted Lancaster - a site that encourages people to go on adventures around the county and learn more about local history - talks about the Tschantz Cemetery located just outside of Strasburg. 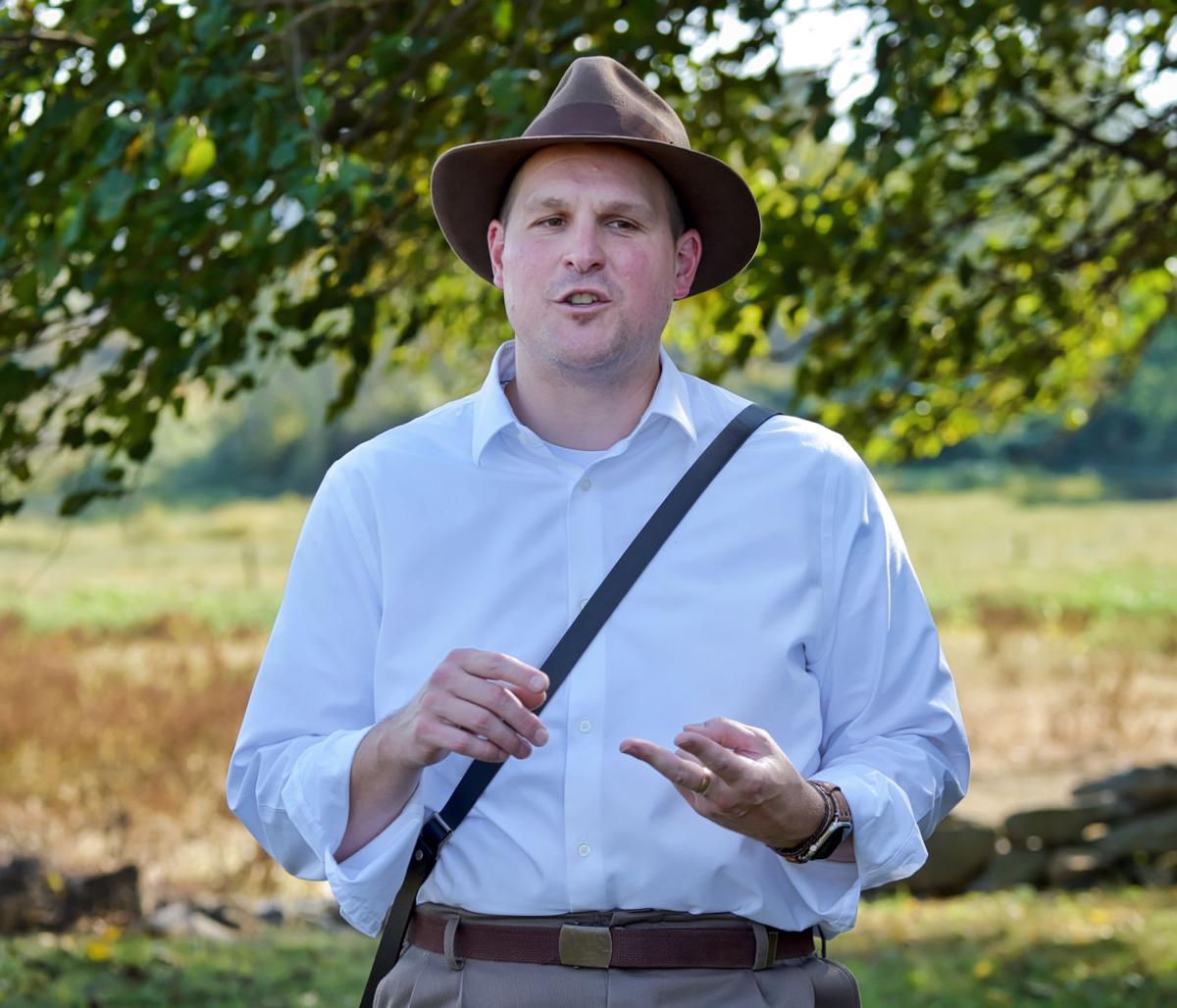 Adam Zurn in the Tschantz Graveyard talks about the adventures he's created for Uncharted Lancaster -  a website featuring a unique mix of geocaching and outdoor escape rooms. 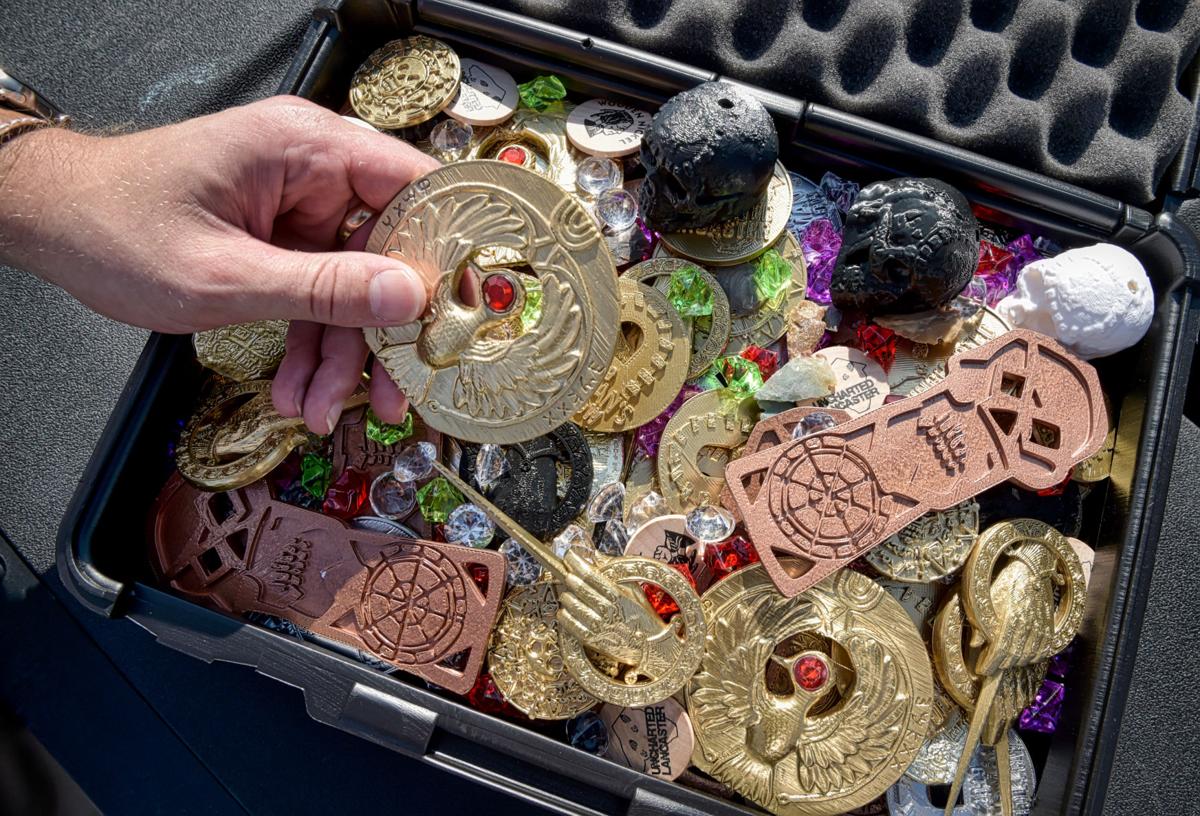 Some of the "Uncharted Lancaster" loot. Zurn prints the treasure using a 3D printer and some of the are items found in adventure movies such as the Indiana Jones epics, "The Goonies" and "National Treasure."

On a hot October afternoon at Tschantz Cemetery, one of the oldest in Lancaster County, Adam Zurn looks strikingly similar to Indiana Jones.

The 41-year-old Lampeter-Strasburg High School technology teacher has the look down. He carries a leather satchel and wears a white dress shirt with rolled sleeves, khaki pants, a fedora and a five o’clock shadow. Before turning to greet a visitor, he coils a length of rope and places it in the bed of his pickup — next to his treasure chest.

Then Zurn flashes a smile and extends his hand.

Zurn, a resident of Conestoga Township, is the creator of Uncharted Lancaster, a website that offers, for free, more than a half-dozen self-guided scavenger hunt-like experiences and dozens of articles about local history. The adventures are all based in Lancaster history and lore, and participants are rewarded with some of Zurn’s treasure.

Closer inspection of Zurn’s loot reveals that the ancient Aztec death whistles, Egyptian artifacts, gold coins and other esoteric trinkets are actually made from a 3D printer. Zurn creates them from patterns provided by thingiverse.com, a database of designs and information for 3D printing enthusiasts.

“I always think it’s kind of a life-changing experience, that first time (you use a 3D printer),” Zurn said. “It’s pretty amazing.”

As a technology teacher, he can expound on the wonders of 3D printing and computers. But he’s so enthusiastic about local history, too, that you’d be forgiven for assuming Zurn is a history teacher.

“I get that a lot,” Zurn said. His parents inspired him.

Zurn’s family spent their summers taking trips to historical sites (or, as Zurn and his brother used to say, to “some famous dead guy’s house”) all over the United States. “As I got older, I started to appreciate these places and eventually I grew to enjoy it,” he said.

Today, he puts that passion into practice. Away from the classroom, he might be found bushwhacking just off the Enola Low Grade Trail in search of a suitable spot to hide clues; or hiking in Safe Harbor, where legend has it that a cache of Conestoga Indian gold is hidden in the hills — and guarded by a 7-foot ghost.

“It sounds really promising at first,” said Zurn of the legendary stash. “But I’m sure there’s no real gold out there. But there’s just enough to the story that you go, ‘Maybe it could be out there.’ And there’s the hint of the supernatural.”

Read his website and you’ll spot how the historical stories skew to the cinematic. Zurn might speculate at times, but it’s obvious the teacher has done his homework. A transplant to the area from Susquehanna County, Zurn approaches local history with awe, imagination and an infectious enthusiasm.

It started with Benedict Eshleman Cemetery. Some of Zurn’s co-workers told him the cemetery in Shenk’s Ferry was one of the oldest in the country. That was enough to whet Zurn’s appetite.

Pennsylvania College of Art and Design celebrates diversity in art

“No one knew exactly where it was,” Zurn said. “I’m so used to searching something on Google and it tells you everything you need to know and exactly where you need to go. And it was like one of the first times in my life where that didn’t happen. ... People were just like ‘Well, it’s in Shenk’s Ferry and you cross a stream and you go up a hill and it’s on the other side of the tracks.’ There’s like 70 acres in Shenk’s Ferry, and I bushwhacked most of it until I finally tracked it down.”

The discovery of the secret cemetery in the forest along the Susquehanna inspired one of the most popular adventures on Uncharted Lancaster.

“I thought ‘Wouldn’t it be neat if other people could go on this adventure and find this lost cemetery that’s hidden in the woods,’ ” Zurn said.

Mapping the hidden treasures of Lancaster history on Instagram

Here’s how Zurn’s adventures work. First, chose an adventure from his website and head to the starting point (usually somewhere on a local hiking trail) provided by Zurn. From there, participants follow clues and decipher codes to unlock further steps on their way to finding the treasure.

When choosing an adventure, participants can consider the difficulty of the adventure (using a scale of one to five fedora-wearing emojis), distance, what to bring (including if the location has cell service and internet access), a hyperlink to learn more about the history of the location and instructions on how to complete the adventure. It’s all DIY and at your own risk, but Zurn said he strives to make the experience a positive one, including links to hiking safety in the disclaimer part of his website.

“I usually need to hike the location a couple of times and figure out how to get people from Point A to Point B,” Zurn said. “I don’t want to trespass, so it needs to be public areas. Figuring out all of that stuff is kind of a time-consuming process.”

Zurn often takes his 10-year-old son along on his adventures and says the Uncharted Lancaster adventures are a great way for children to enjoy the outdoors.

“People say stuff like ‘Wow, my child doesn’t like walking around the block, and they went on a big hike in the middle of the summer, and they had an amazing time because we were looking for clues and finding treasure,’ ” Zurn said.

The adventures appeal to everyone from distance athletes looking for something to occupy their minds during long runs to families and Scouting troops. Zurn said he had to resupply his treasure stashes four times during the Memorial Day weekend.

Jennifer Crumbling, of Manheim Township, and her family have done four of the Uncharted Lancaster adventures. Her daughter’s Boy Scout troop and son’s Cub Scout pack have tried the challenges, too.

“Our family thinks of it like we’re living the movie ‘National Treasure,’ only on a smaller scale,” Crumbling said. “Seeing graves from the 1700s, exploring the site of a dynamite factory explosion and searching for treasure at a trestle bridge makes the kids feel like they are true adventurers. The kids love getting and collecting the prizes.”

Crumbling and other participants often share photos from their adventures on Instagram. Donations can also be made to the Uncharted Lancaster website to help fund further adventures.

The average adventure costs Zurn around $50 to create, including cans of spray paint, spools of 3D printer filament and water-resistant plastic cases that will contain the clues and treasures he hides for each adventure. Zurn has a few more adventures in the works, including a collaboration with the Lititz Historical Society centering on General Sutter and his lost gold.

Unlike actual treasure hunters, Zurn hasn’t made a fortune — or even a penny — on his venture, but that’s hardly the point. “It’s pretty rewarding to see that people had a good time,” he said. “And they’re learning local history.”