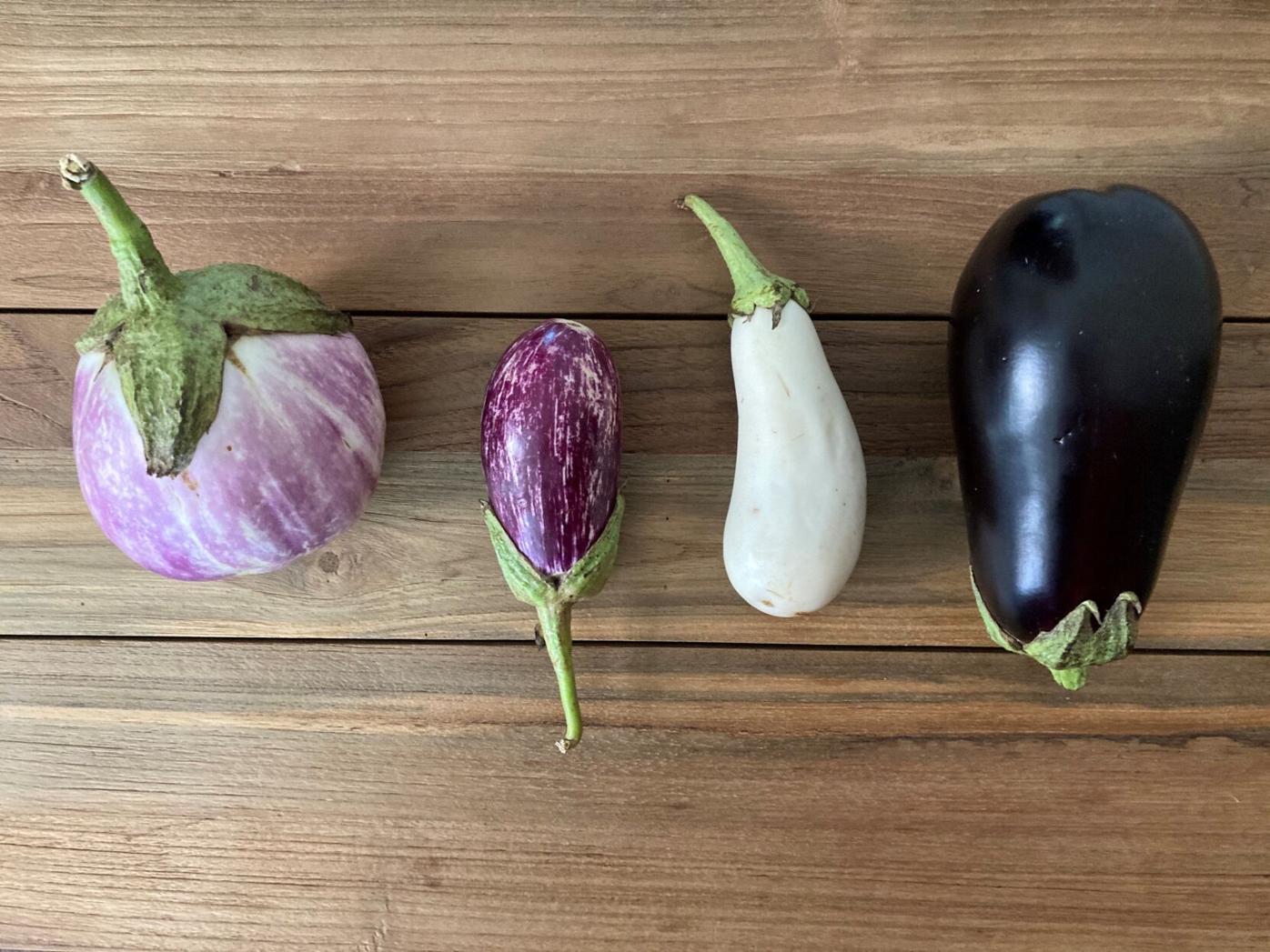 The choices for eggplant lovers are many; a sampler of locally available varieties include (left to right): heirlooms such as Rosa Bianca and Listada de Gardia as well as the more common white and globe varieties. 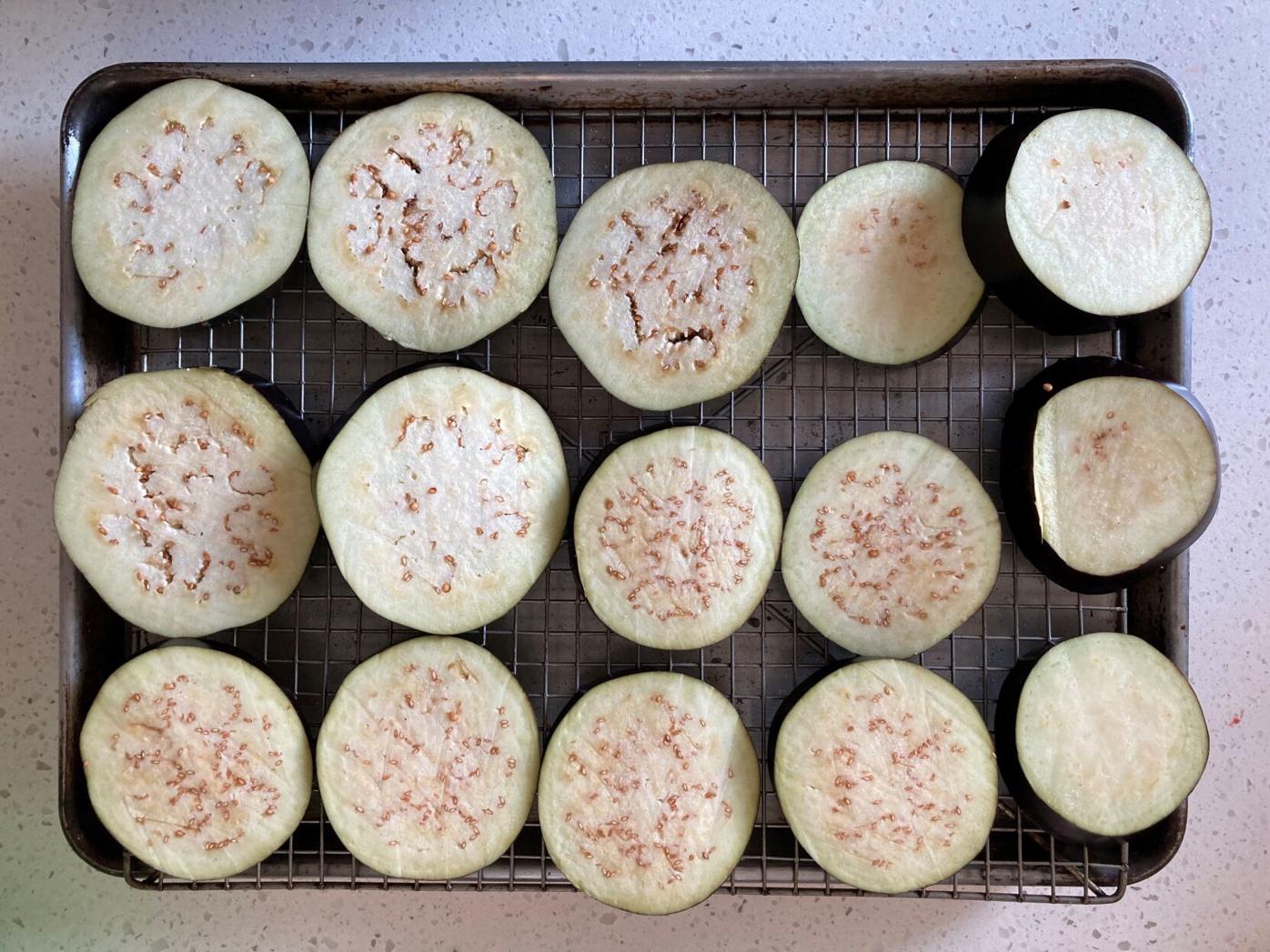 Lightly salting eggplant helps to draw out water content, a process called leaching. As they rest on a rack, the eggplant perspires, resulting in a meatier final result. 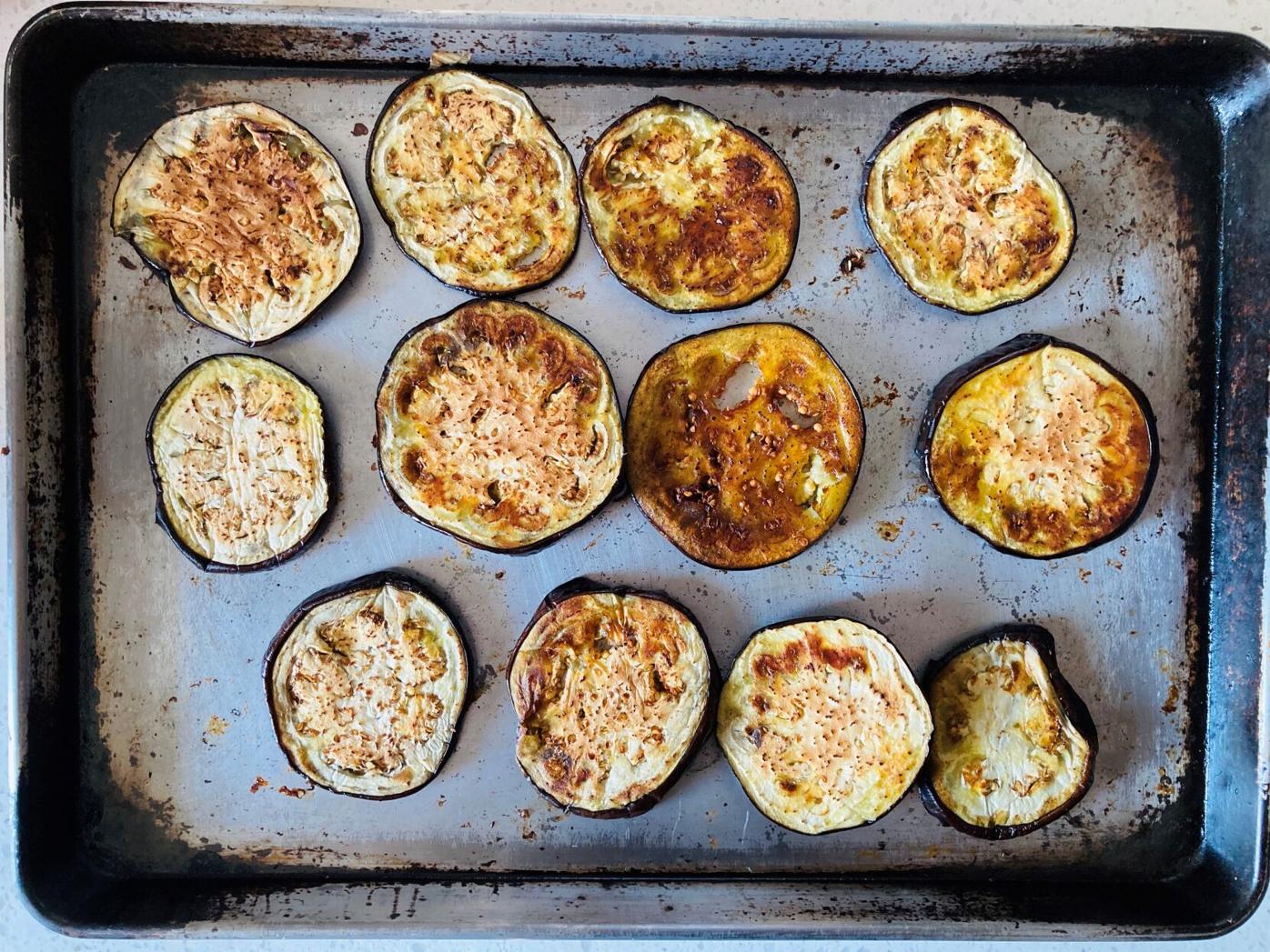 Eggplant just out of the oven; notice how much it shrinks in volume. 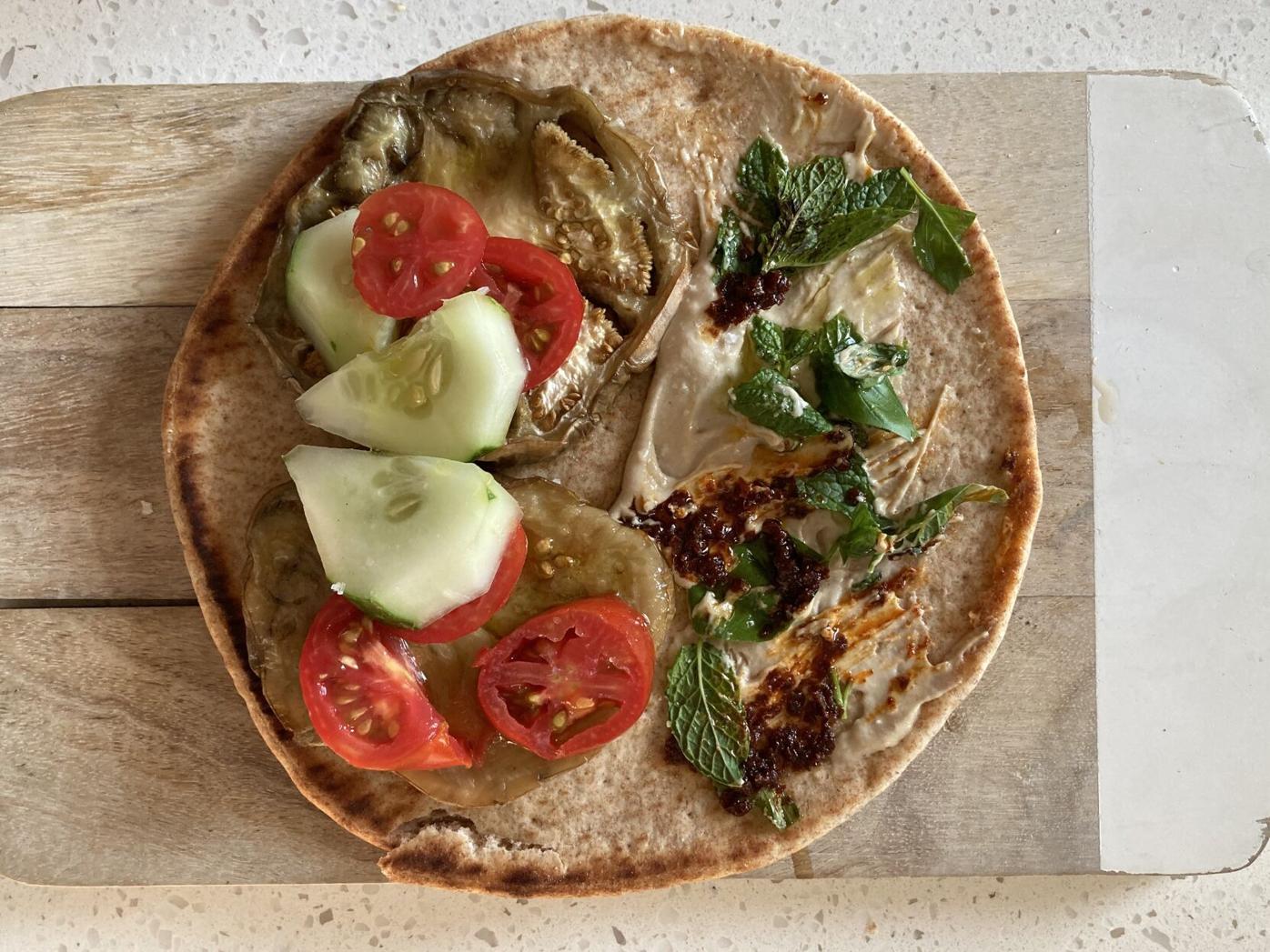 Roasted eggplant rounds are extremely versatile and can be repurposed in various ways. Here, it's central to a  Middle Eastern flat bread, with tahini sauce, tomatoes, cucumber, fresh herbs and harissa. 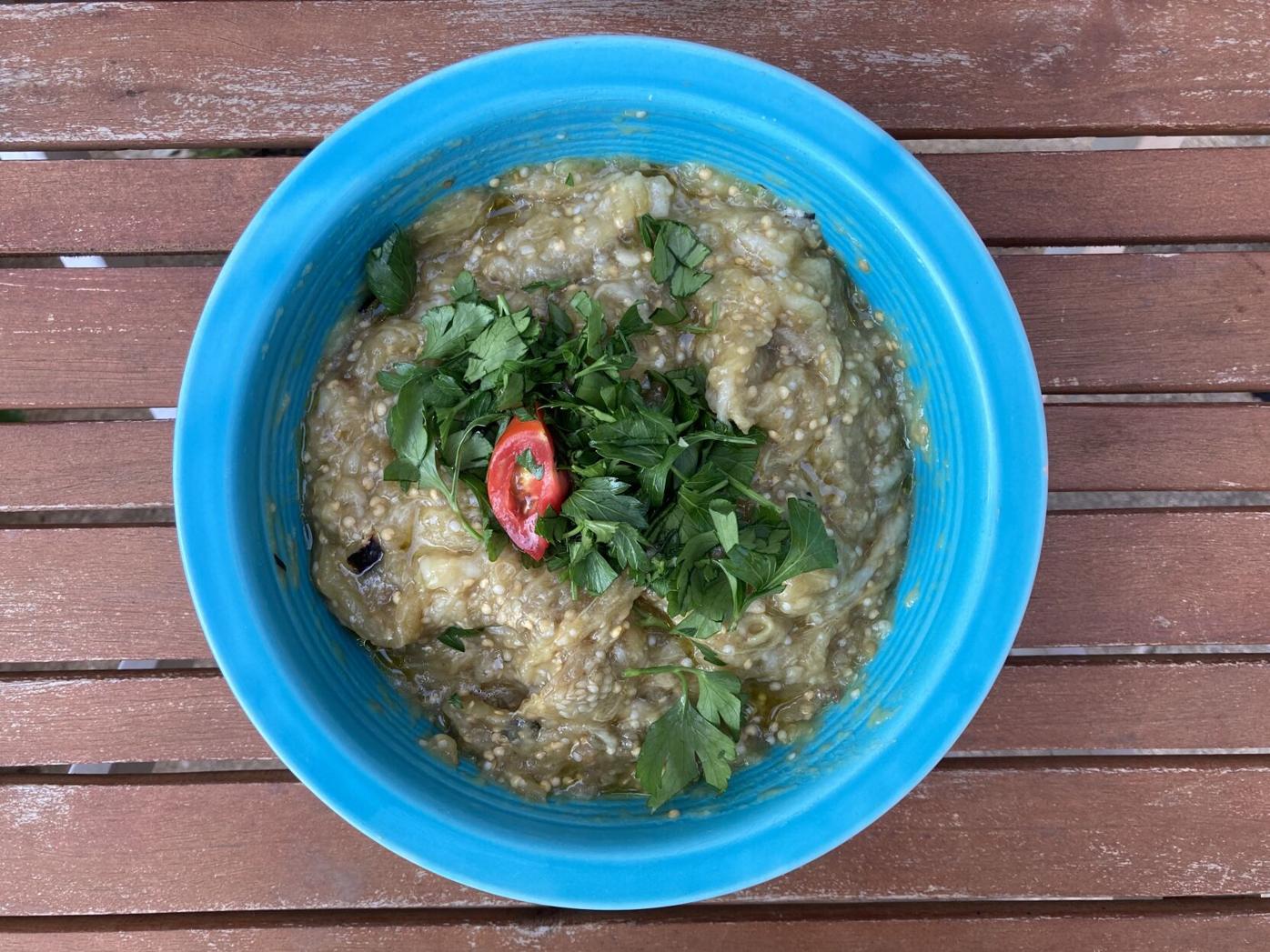 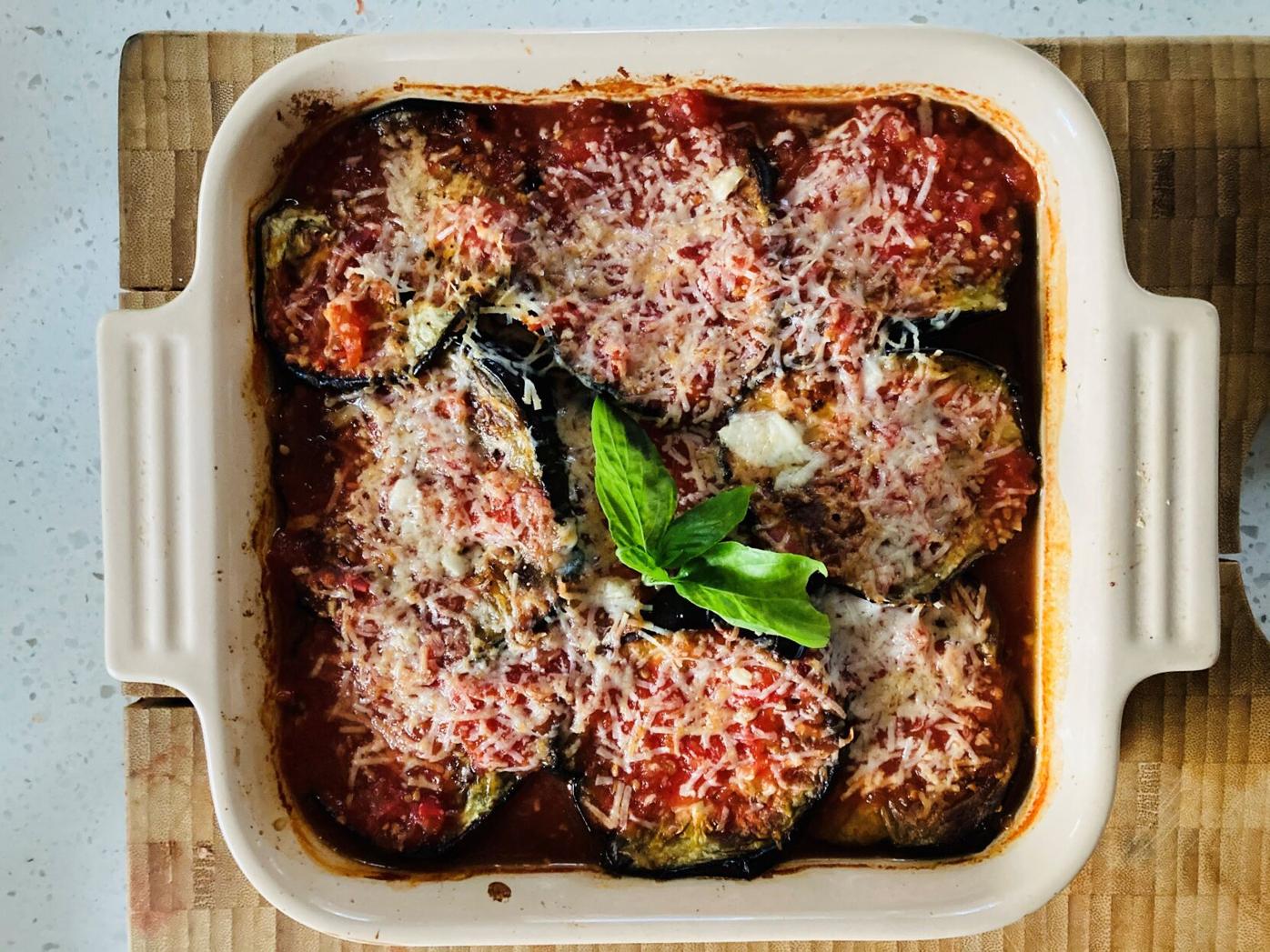 An unbattered riff on eggplant parm, with roasted eggplant rounds layered with tomato sauce and grated Parmigiano-Reggiano on top. 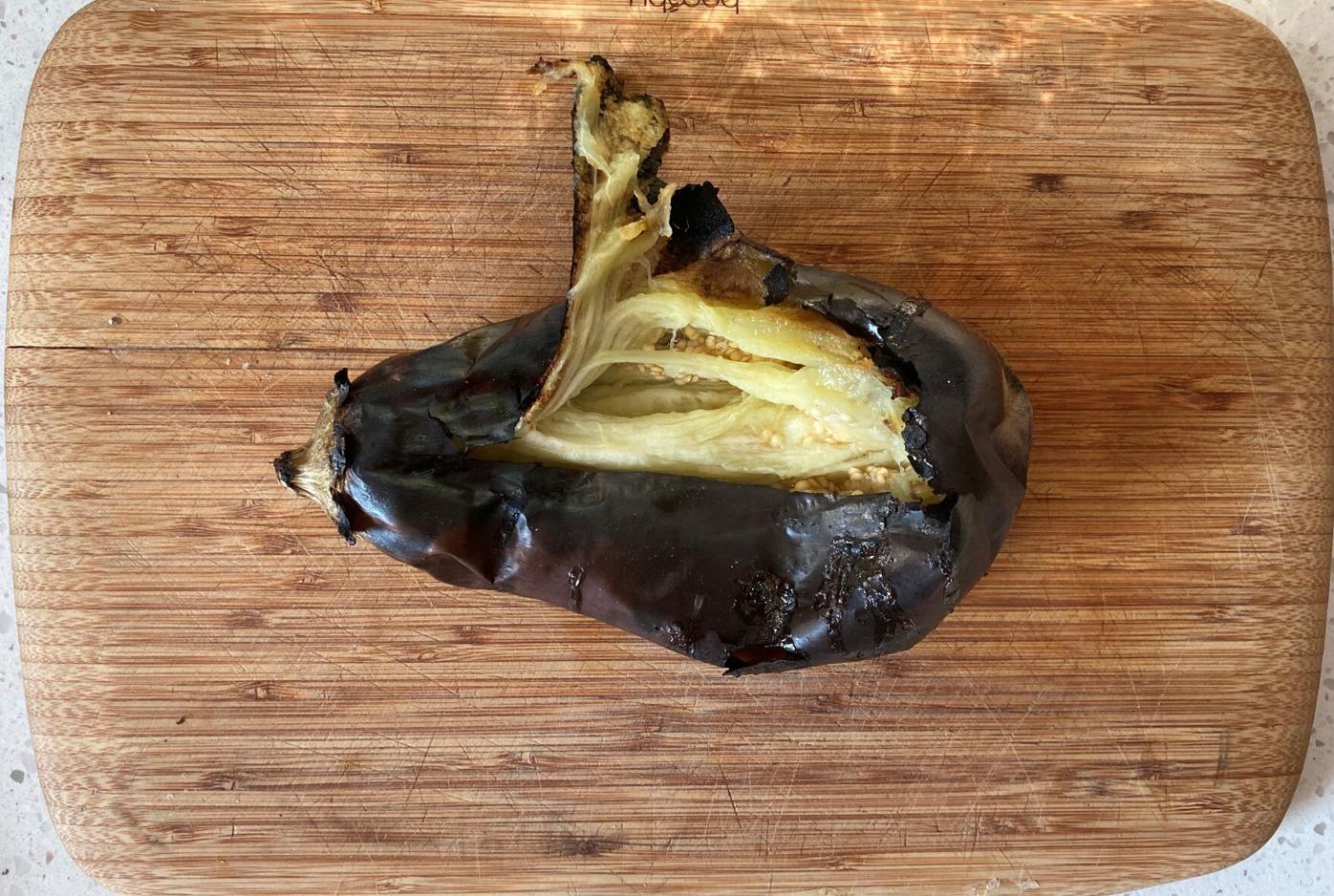 Cook whole eggplant until it collapses on itself and is extremely tender on the inside.

The eggplant is the eye candy you spot across a crowded room that stops you in your tracks and leaves you spellbound. You have never seen anything so beautiful, gleaming like a precious jewel, and try as you might, you cannot avert your gaze.

You inch closer to get a better look at its regal cape, this one dyed in deep purple. It looks velveteen, or maybe it’s satin. You pull yourself together and make the final approach, extending a hand and “Hello, I don’t believe we’ve met.” You receive a firm handshake in return. Things are going well.

You make plans to meet again, this time in the kitchen. You try to strike up a conversation, but it’s awkward. Other summer beauties, like tomatoes and peaches, make fast friends with anyone who asks. Just slice and slurp, right?

The eggplant is a far more difficult read, giving few, if any, clues on how to get acquainted. What lies beneath that beguiling exterior, anyway? It is not obvious, an understandable source of frustration for anyone who’s ever tried to cook an eggplant and has sworn it off for life.

What if there was a way back to eggplant, a chance to erase the past of undercooked cardboard swimming in tomato sauce that everyone pretends to like, saved only by a pool cover of melted mozzarella. What if we could make things right with eggplant, or at least try again with some tried-and-true tips for romance.

Here are two of my favorite ways to get reacquainted.

Cook whole until no longer recognizable

That’s right; you are cooking the eggplant silly until it collapses on itself, and the skin gets charred and crackly. Inside, the flesh and seeds have transformed into a creamy state, so creamy, in fact, it practically self purees. Sometimes referred to as “eggplant caviar,” the puree is more silky than roelike and will remind you of the Middle Eastern mezze dish known as baba ghanouj, before tahini paste is added.

Ideally, the cooking is done on a grill to capture maximum smoky flavors, but a hot oven (about 400 F) is a very good Plan B.

With a fork, prick the eggplant all over so it can release steam while cooking. Lay directly on a grill grate or on an oven rack. (If using the oven, place a tray below the rack to capture any escaping liquid.)

Cook until the eggplant is completely soft and has visibly surrendered, about 1 hour. Transfer to a work surface and let cool for at least 15 minutes; the emerging steam can burn.

With the tip of a sharp knife, carefully cut open the top and scrape out the flesh with a spoon. Transfer to a bowl and mash thoroughly with a fork.

Add any or all of the following to season a 1-pound eggplant:

Add any of all of the following as garnishes:

Serve with pita, crusty bread or crackers, or with your favorite grain. (I like it with brown rice.) It’s also pretty wonderful with grilled chicken.

Sliced into rounds, leached, then roasted or grilled

This method proves the argument that eggplant can be meaty. You can cook a bunch in advance and then repurpose throughout the week in various ways.

With your stash of roasted rounds, both toothy and spongy in a mushroom sort of way, the flavor possibilities are endless.

Here’s how to tackle it:

Slice the eggplant into rounds, about 1/2-inch thick. I like to keep the skin on, but that is completely optional. Place the rounds on a rack in a single layer (Plan B: in a colander) and lightly sprinkle salt on both sides. This step, called leaching, helps to draw out the water, getting us one step closer to meaty eggplant. After a few minutes, you will notice the eggplant beginning to perspire. Pat dry with a paper towel on both sides.

Preheat the oven to 400 F or prepare a grill for similar temperatures.

Brush 3 to 4 tablespoons of olive oil on a sheet pan and arrange the eggplant in a single layer. (If using a grill, brush the grates with oil.)

With a few spoonfuls of tomato sauce on the floor of a baking dish, you can build a deconstructed eggplant parm, with or without cheese. Bake covered at 350 F for about 15 minutes, then uncover and cook for another 10 minutes. Feel free to finish under the broiler for a minute or so to brown any cheese or bread crumbs.

Swap out the tomato sauce for your favorite barbecue sauce and add some caramelized onions, sliced tomatoes and maybe some corn kernels. Heat the same way.

With eggplant rounds at the ready, you can create a pizza-like situation or get serious with your sandwich game. Whether the eggplant is right out of the refrigerator or reheated is completely up to you. Gather your favorite fixins and start building your masterpiece.

Anything goes, but here are some accompaniments for consideration:

Don’t do bread? No problem. Swap out the carbs for your favorite lettuces and build your own eggplant bowl. Be sure to add plenty of those fresh herbs mentioned earlier, plus a glug or two or olive oil.

How to pickle cucumbers, peppers and other summer vegetables [recipes, video]

Interested in elimination diets? Check out these tips for going vegan, gluten-free or dairy-free

How to store zucchini, tomatoes and more summer produce like a chef

Why kimchi is good for your health, plus a recipe to make your own

How to select and store

You’re invited to join the Volunteer Center and United Way of Lancaster County for a virtual volunteering information session.

Next year, the Bryce Jordan Center at Penn State won't be filled with its usual mid-February cacophony of dancers, live-music performances and…

The Friends of the Lancaster Public Library's Big Book Sale took in a big sum last week to help the library — nearly $11,000 more than during …

August in Lancaster County means that peaches may be ready for picking, as their harvest season in Pennsylvania is July to September.

How to make salsa with in-season tomatoes and tomatillos

For the past nine years, I have been teaching cooking classes at Rancho la Puerta, a wellness resort in Tecate, Mexico, a border town southeas…

When a food writer bakes her own birthday cake

By the time you read this, my birthday will be a few days in the rearview mirror, with my co-pilot and I taking a much-needed break out of Pan…