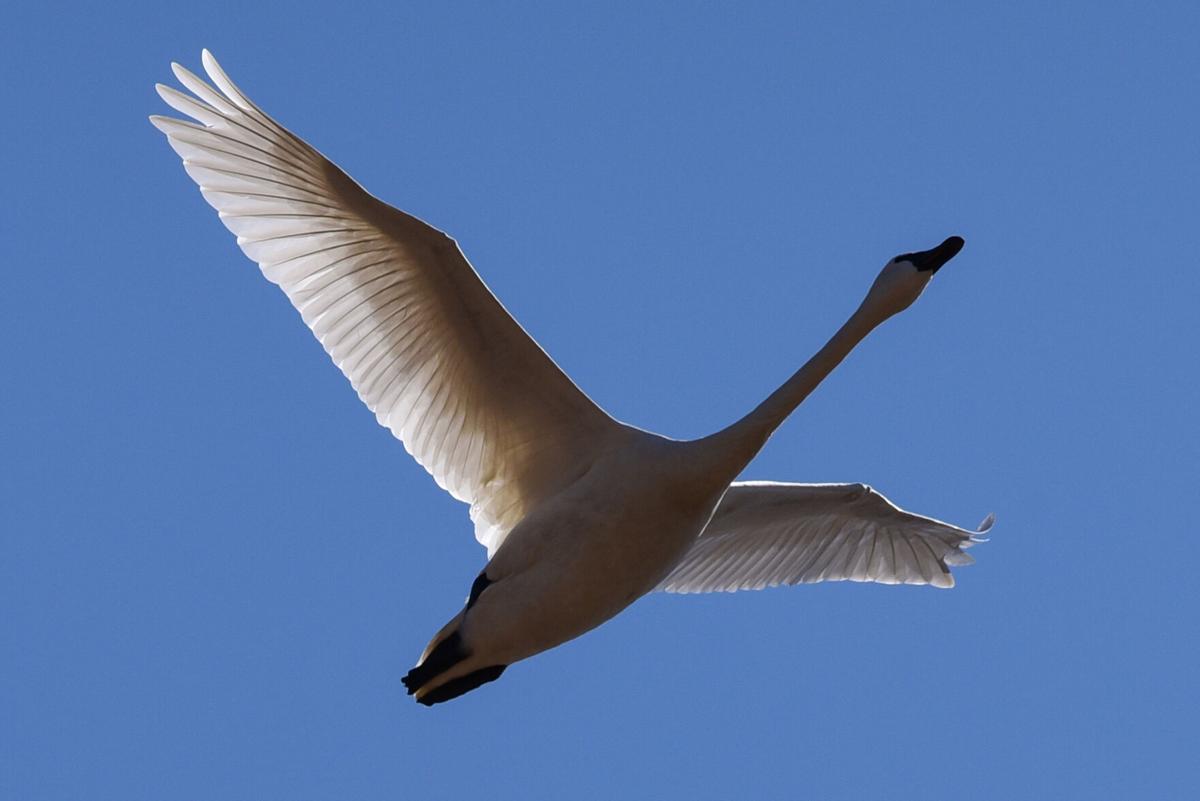 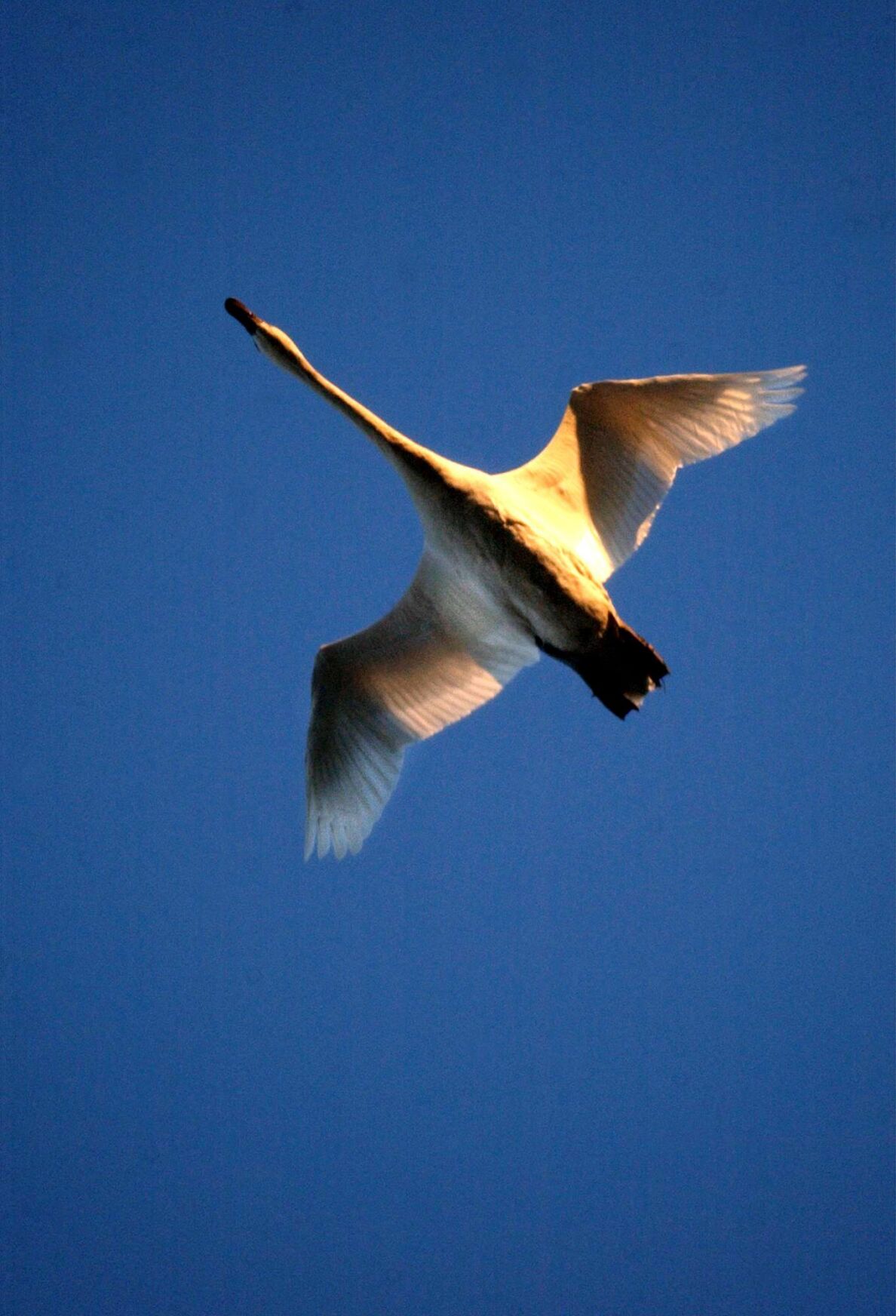 In this 2004 photo, a tundra swan sails through a winter sky near Mount Joy. 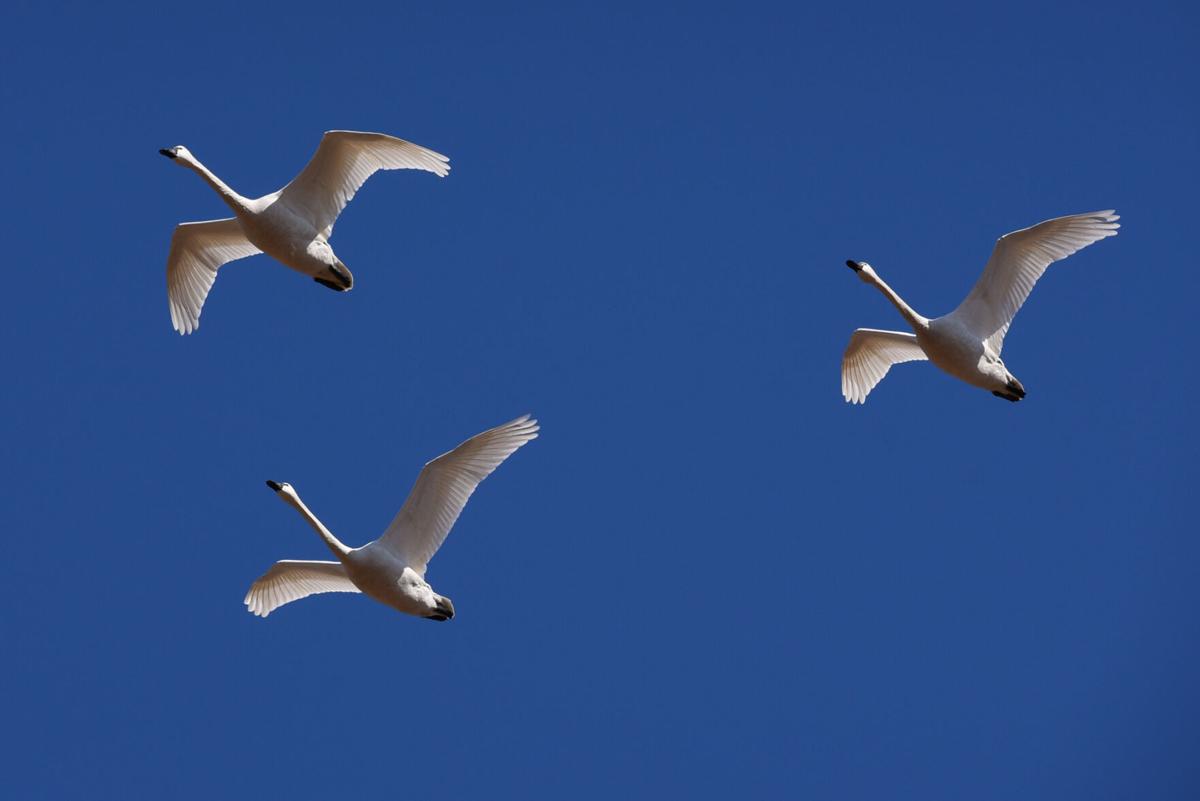 I’ve been admiring stately tundra swans at Middle Creek Wildlife Refuge this winter, as I have the last several winters. And seeing them reminds me of a March evening, years ago, when I lived in Neffsville.

At dusk for a couple of days, I noticed flocks of elegant swans consuming corn kernels in harvested cornfields just outside of town.

Eager to migrate north to their nesting territories on the Arctic tundra, those beautiful swans came into Lancaster County from the Chesapeake Bay, but stopped their migration because of ice and snow farther north.

At dusk on the third day, I quietly entered a plowed field near a cornfield where the swans fed the night before, lay still on my back in a furrow of soil and watched for flocks of swans. Soon I saw the first flocks of majestic tundra swans, silhouetted beautifully against the red, western sky, approaching the fields where I lay.

With many individuals “woo-hooing” loudly, each group of graceful swans circled the cornfields a few times as the birds looked for danger, then descended into the wind, with silhouetted wings set like parachutes, to the fields. Apparently, they didn’t notice me lying flat on the soil.

Flock after noisy flock, in rapid succession, continued to pour out of the western sky, from as far back as I could see, and settle in nearby cornfields. Groups of these exciting birds were now silhouetted before moonlight as they settled on the fields near me. All the while, I was flat in that furrow and hoped those giant birds wouldn’t land on me.

Watching those magnificent swans descending, light as snowflakes, to moonlit fields near where I was lying on my back was wildly thrilling to me. I was elated! About an hour later, I “floated” across the moon-drenched fields toward home, but vowed I would return to those fields the next morning.

Early the next morning I walked over the same fields, which, alas, were empty, except for a few horned larks. I guessed the tundra swans returned to the Susquehanna River, where they rested between feeding forays in those days. But it was a lovely, clear morning, with the moon hanging above the western horizon.

I decided to visit a nearby, half-acre farm pond to see if there were ducks or geese on it. I crawled up the tall weed-and-grass-covered dam and peeked carefully through that vegetation to view the pond. There were no geese or ducks, but the pond was nearly wall to wall with tundra swans!

Most of the swans were resting quietly, and I don’t think they knew I was present. After a quick look, I eased down the dam and walked across the fields to home. I was thrilled that I approached those wild swans so closely.

The author, a longtime local naturalist, lives in New Holland.

If you know an interesting story, please write it in 600 words or less and send it to Mary Ellen Wright, LNP editorial department, P.O. Box 1328, Lancaster, PA, 17608-1328, or email it to features@lnpnews.com. Please include your phone number and the name of the town you live in. Email is preferred since regular mail access is limited because LNP|LancasterOnline employees are working remotely.

We're now in the eleventh month of the pandemic.

Update: Due to inclement weather, this event, originally scheduled for Feb. 7, has been post…

In honor of the upcoming Valentine's Day holiday, we asked our readers to share their most cherished memory with their significant other and g…

In finding out truth about father, she gained a sister [I Know a Story column]

All I wanted was a photo!

Since her life was changed by teacher’s gift, she values in-person learning [I Know a Story column]

In the midst of this pandemic, America continues to be in crisis mode as to the feasibility of reopening some of our nation’s schools safely w…