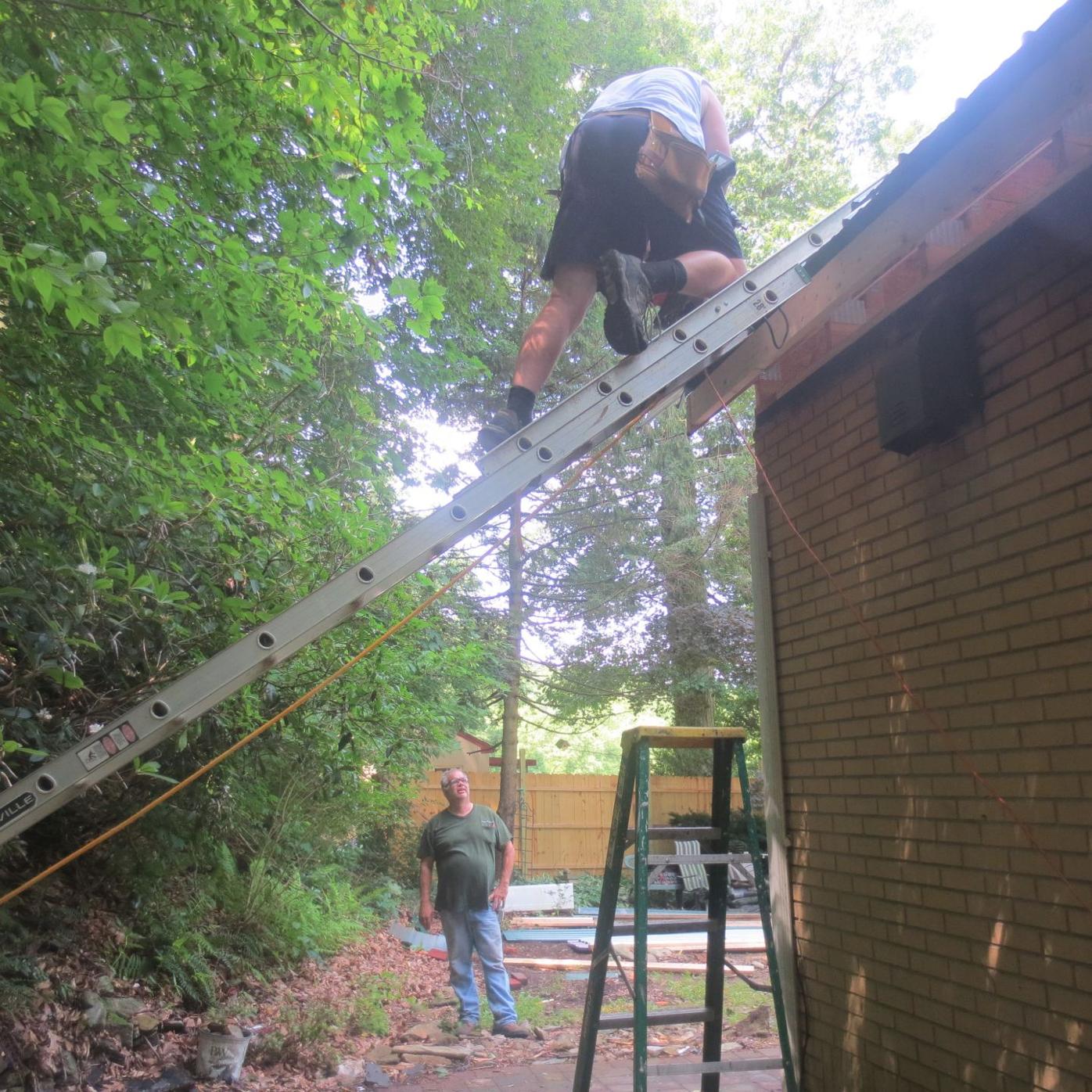 Steve Lehman, chairperson of Martic Pantry, looks on as teacher Dale Mylin climbs a ladder to fix the roof of a fire-damaged house. 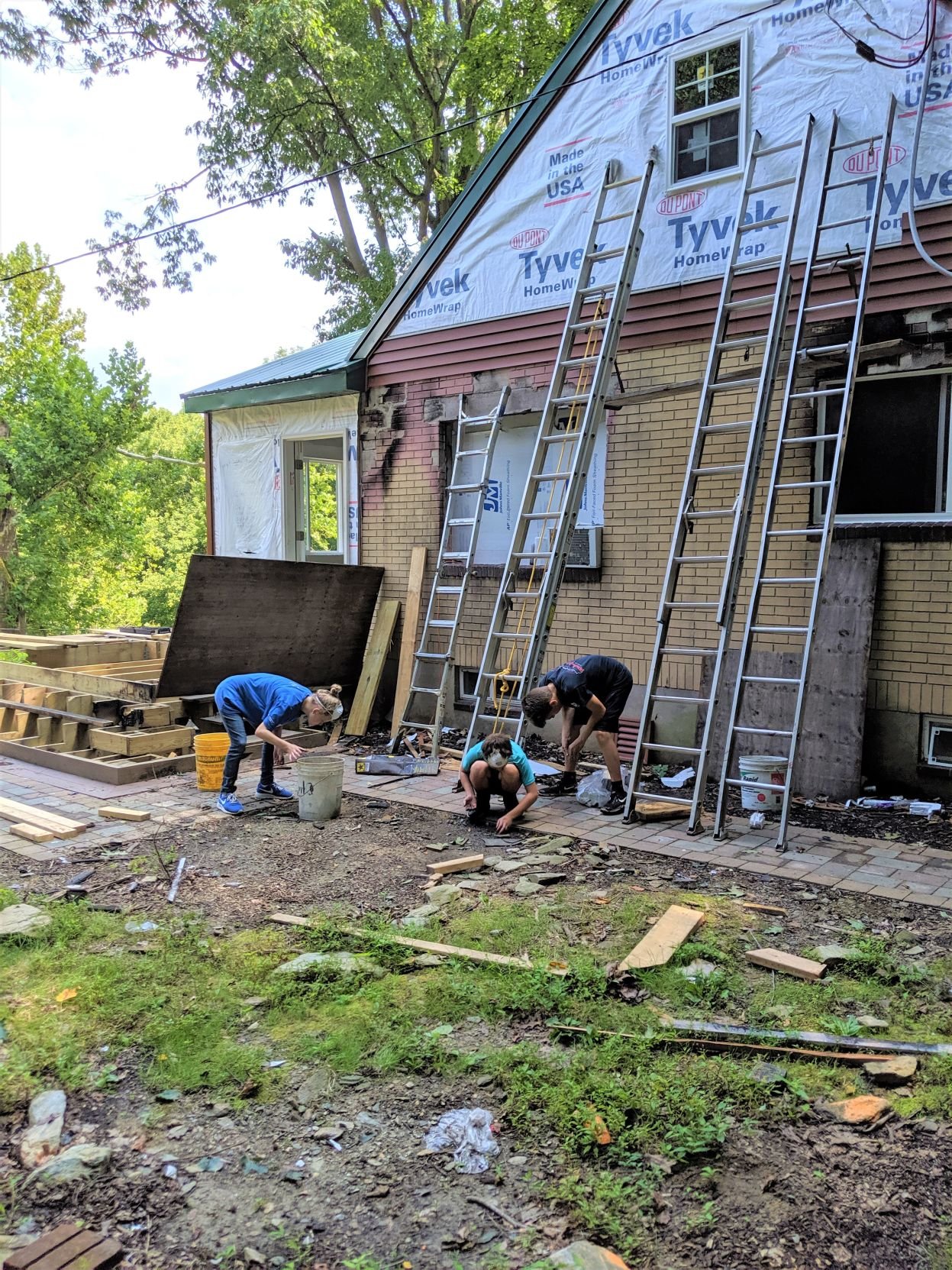 Volunteers from Christians in Action work on the rebuild of a Martic Township house that recently had a fire. 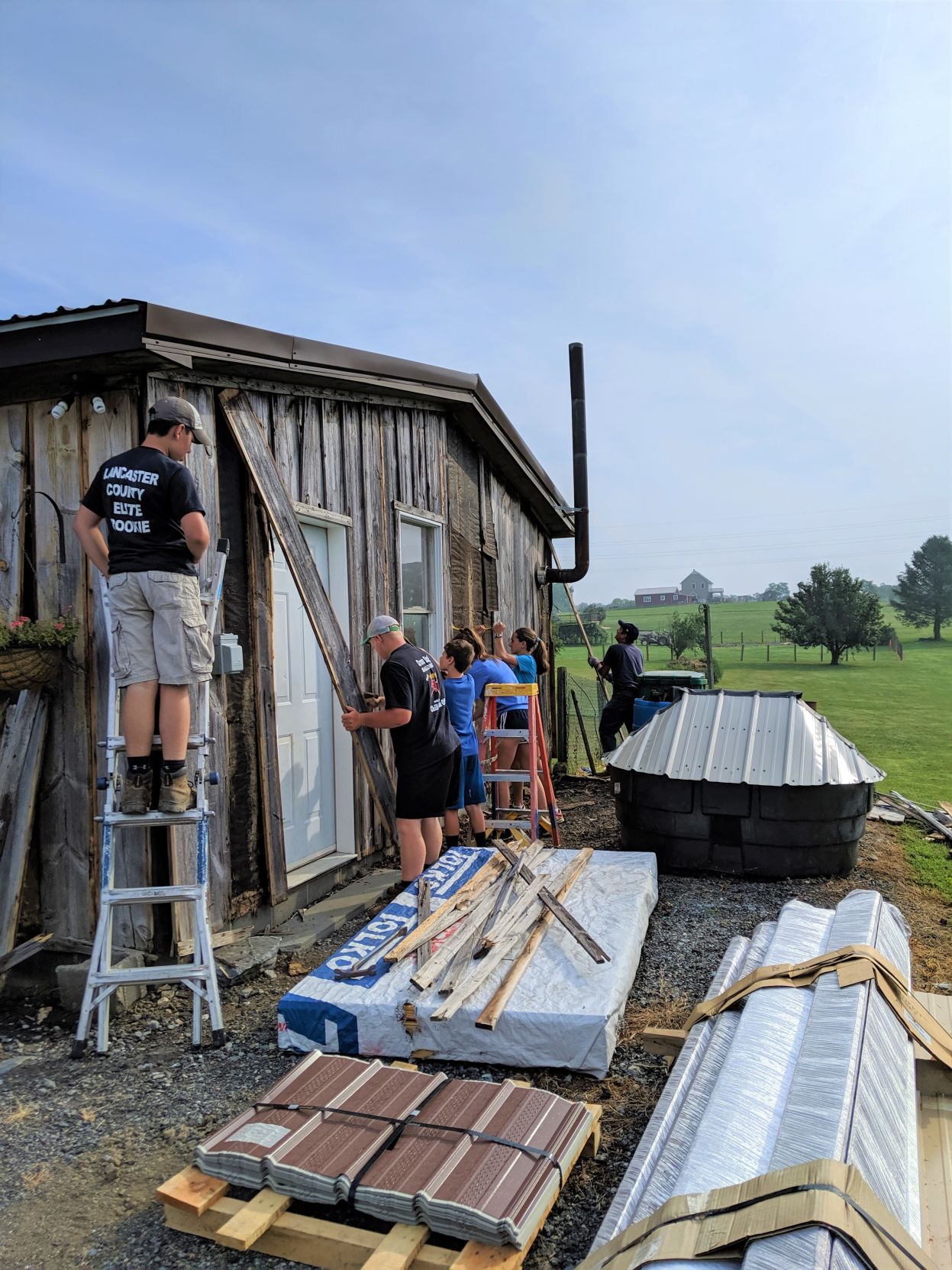 Volunteers from Christians in Action attach siding to a termite-damaged home. The owner had recently had three strokes in under 24 hours. 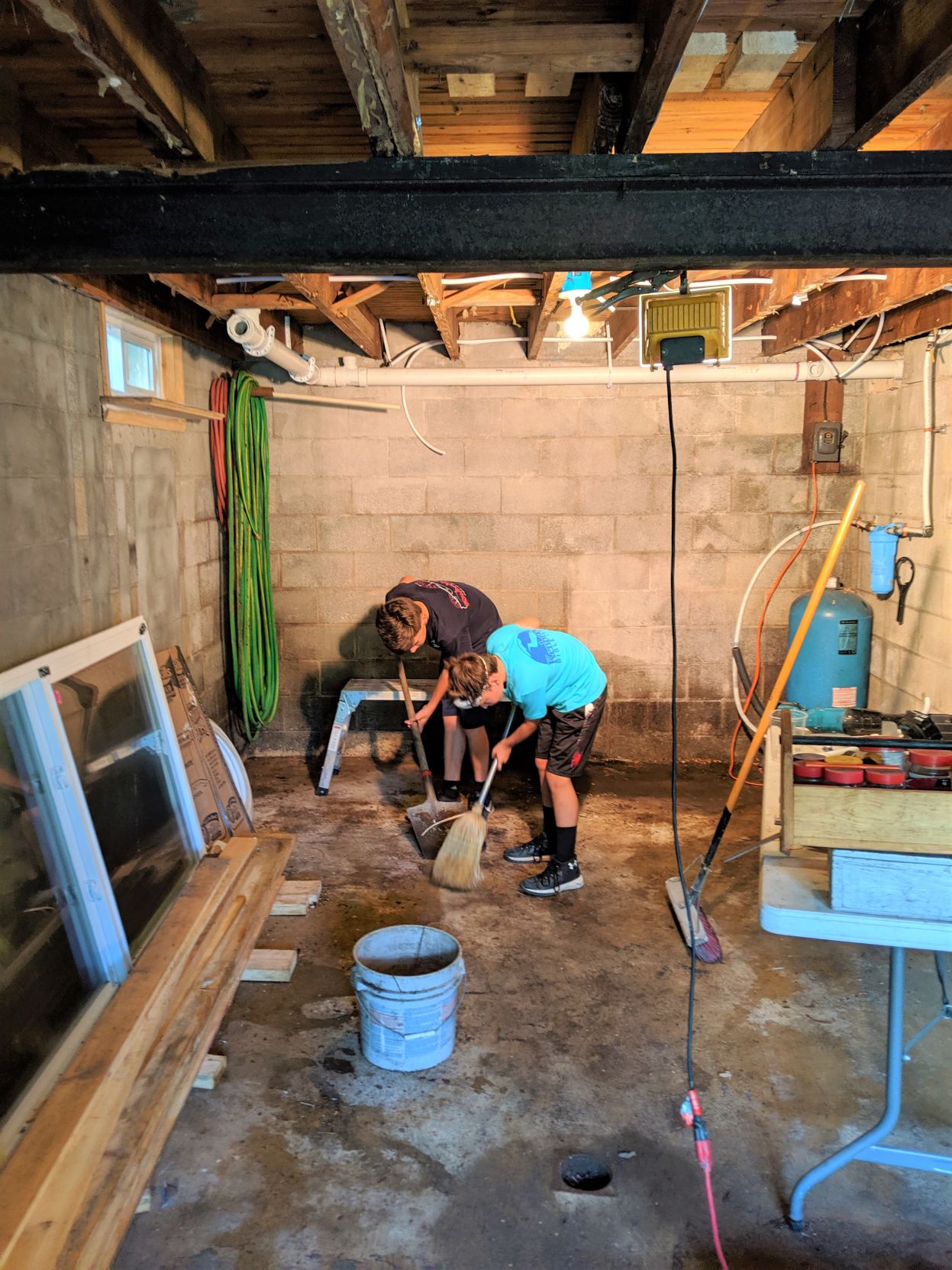 Members of a youth group help clean out the basement of a fire-damaged home in Martic Township.

When the people behind Martic Pantry founded the organization in 2015, their goal was to provide food to those in need in Martic Township. Now, four years later, they’ve taken on the challenge of rebuilding a house for a woman victimized by a fire.

The new direction began last winter when an elderly woman living in Martic Township approached the Pantry, asking for food assistance. She explained she recently had a fire at her home and was experiencing financial troubles. Because she was uninsured, she could not afford the cost of cleaning up her property.

Rather than turn her away, Steve Lehman, chairman of the Martic Pantry’s board and the other members of the board decided to organize a cleanup for her.

“We are a Christian-based organization, and it is our goal to reflect God’s love to others,” Lehman says. “By helping and donating time and organizing things, that is one way we can do that.”

Becky Gochnauer, who serves as an adviser for Martic Pantry and also is a volunteer manager for the Lancaster unit of Mennonite Disaster Service, based in Lititz, helped put the two organizations together.

“As Steve was sharing about the fire, I said this is an MDS project ... this makes sense,” she says.

The volunteers stripped the burned walls of the home to their bones between Christmas and New Year’s. The foundation of the house, however, was still intact.

More than 60 volunteers, from a number of local churches and a youth group showed up to help.

“There are people who are willing to help,” Lehman says. “(There’s) a lot of willingness in young people to work.”

After the initial cleanup, the members of Martic Pantry had another conversation about what else they could do for the homeowners.

They decided, with the help of Mennonite Disaster Service, to take on the task of rebuilding her house.

The rebuild began June 17, when an Amish contractor and his crew donated their time for two days to remove the old roof structure and set new trusses.

Other donations came from small businesses throughout the community, with many of them pledging to donate specific material, like drywall, electric or roofing materials.

Work on the house continues.

The Martic Pantry also has begun pursuing another housing project. A man in the community who suffered three strokes in 24 hours needed the siding on his house redone after termites damaged it. Eight volunteers began working on the house Aug. 7.

Longtime Mennonite Disaster Service volunteer Jeremy Railing brought his family of six, with children ranging in age from 7 to 13, to help out.

“It’s just a joy to be able to serve other people,” he says. “We just made it a point to do it as a family today.”

The family belongs to Byerland Mennonite Church and places value on volunteering.

“We’ve been blessed with so much,” he says. “Our house might not be exactly the way we want it but we continue to work on that, so why not help out those who are definitely in need? I mean that’s what Christ has called us to do, to help those around us and serve when we can.”

Dale Mylin, a Lancaster Country Day School physical education teacher and middle-grade dean, volunteering for the burned-house project and also is volunteered to help fix the siding on the other house.

“You don’t have to go out of state or to another part of the world; there are a lot of needs right here in Lancaster County,” he says. “So to be able to hear about this need, see it and participate in it, it’s just encouraging to me. It’s a blessing to bless others.”

Martic Pantry, which relies on donations from the community, is closely tied to Martic Store, 561 Martic Heights Drive, Holtwood. Lehman and his wife Mary opened the store the same year the Pantry started. The store’s profits go to the Pantry.

The Pantry currently has about 20 “clients.” When taking on a new client, Martic Pantry has them go through an interview process and then determines how much the client can spend on food at the Martic Store. The money is loaded on a gift card.

“It helps with their dignity, with their self-pride, when they come and pay with a card, the same as anybody else,” Lehman says.

Ultimately, the goal is to help the clients become self-sufficient.

The members of Martic Pantry say they hope to continue to help the community in any way they can. Mennonite Disaster Service plans to continue its partnership.

“This is just a really important example of how MDS partners with small, local responses to needs within the community,” Gochnauer says. “And for us, it’s really exciting to see this type of response happening.”